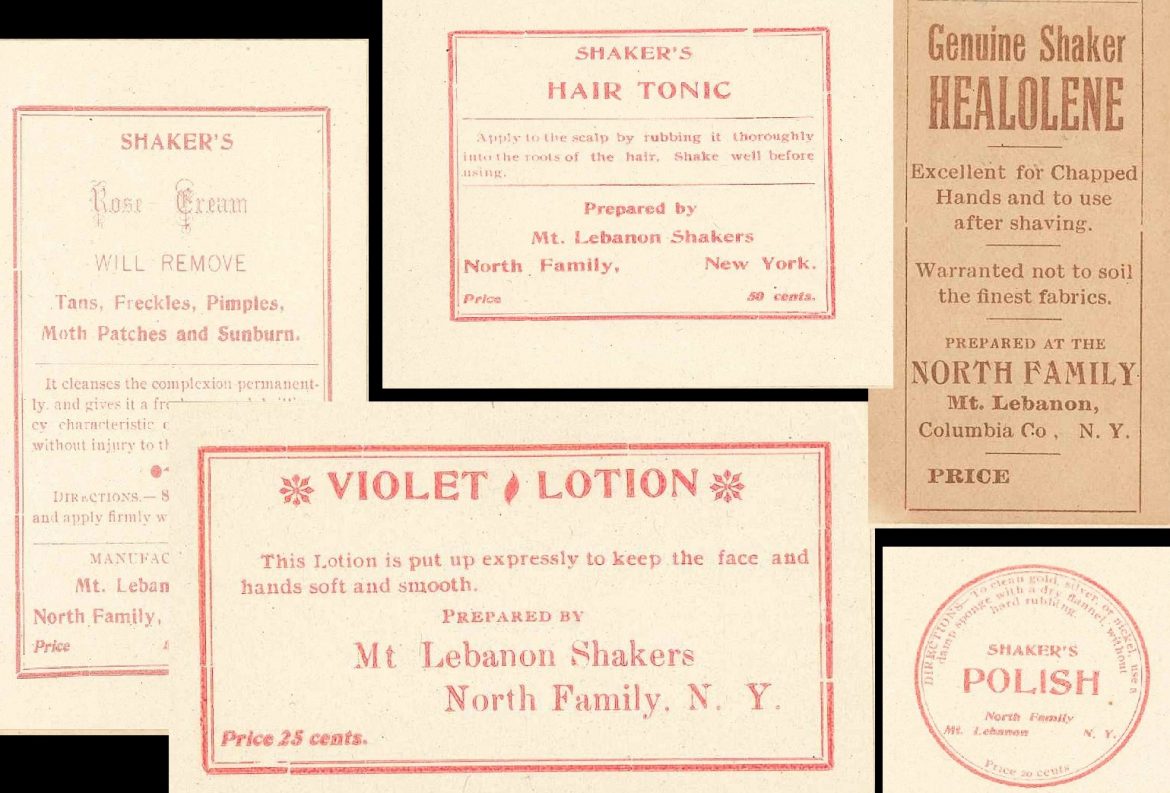 A selection of labels for products made for sale by the Mount Lebanon North Family Shakers. Shaker Museum | Mount Lebanon.

Beyond chairs: “Various productions from the Shaker work-rooms”

In the catalog “Products of Intelligence and Diligence,” distributed by the Mount Lebanon Church Family Shakers, the introductory text states, “[I]t is our aim to show in a concise way a few of the many articles made at the present time by the Shakers of Mount Lebanon, Columbia County, N.Y.” The writer adds, “For more […]

In the catalog “Products of Intelligence and Diligence,” distributed by the Mount Lebanon Church Family Shakers, the introductory text states, “[I]t is our aim to show in a concise way a few of the many articles made at the present time by the Shakers of Mount Lebanon, Columbia County, N.Y.” The writer adds, “For more than a century past various productions from the Shaker work-rooms have been before the public, always receiving therefrom much commendation for thoroughness of construction, simplicity of character, and originality of design.”

The catalog illustrates Shaker cloaks, bonnets, poplarware goods such as pincushions and work boxes, carriers, and spool stands. The last page lists a variety of goods available for sale but not illustrated, such as chamois pen wipers (cost $1.00), and doll bonnets (ranging from 25¢ to $1.00).

The Shakers are perhaps best known for their production of chairs, and to a lesser extent goods such as medicines, brooms, garden seeds, and cloaks. Yet not all communities produced the same goods (or indeed, families within the communities, as each family was a distinct economic and social entity); for example, chairs were only made for sale by the South Family of Mount Lebanon and on a much smaller scale the Shakers of Harvard. The Shakers produced an astonishing variety of goods for sale that are less well known but contributed to the families’ financial fortunes.

In the collection of the Shaker Museum are several examples of the chamois pen wiper advertised in the “Products of Intelligence” catalog. Each features a bisque doll, purchased from an outside vendor, and a skirt in a variety of shades, often in contrasting colors. The skirt fabric was reportedly cut from scraps left over from cloak-making, so that less material was wasted, and the production cost of the pen wiper would be lower.

In addition to the remarkable clothes washing machine that was patented in 1858, the Canterbury, New Hampshire Shakers developed additional laundry products such as a mangle and “Hydro-extractor” (wringer) for sale. They also offered Shaker Laundry Soap. The package label noted that it contained no potash, rosin, Borax, or acid oils, and that, “It is purely a chemical preparation that will not injure the flesh, but leave it soft and smooth…. For washing Flannel or Woolen Goods, it has no equal. It gives clothing and bed linen a pearly whiteness.”

The North Family at Mount Lebanon was primarily agricultural in terms of its operations and businesses; the production and sale of garden seeds was its major industry. The North Family produced a number of food products from its fields as well, such as applesauce, tomato catsup and sauce, and jellies. Yet the North Family also sold personal products such as a violet lotion, hair tonic, and a product called “Healolene,” which was purportedly “Excellent for chapped hands and to use after shaving.” And not surprisingly, considering the Shakers’ reputation for cleanliness, the North Family under trustee Levi Shaw sold rug beaters, some of bentwood and some of metal wire, such as this example in the museum’s collection. Wire beaters with Brother Levi’s label were made from 1890 to 1905.

Several of the Shaker societies also produced wines for sale. Wine was made for sale by the Mount Lebanon Shakers as early as 1859 and until the 1870s, if not later. A manuscript book in the museum’s collection, gathered by an unidentified Shaker at Canterbury, NH, has recipes for wines made with blackberries, raspberries, elderberries, ginger, and, curiously, tomato.

In his seminal 1932 work Community Industries of the Shakers, scholar Edward Andrews states that the Mount Lebanon Shakers also made whips, fans, buttons, pipes, pickles, cheese, napkin rings, and more; perhaps they will be the topic of a subsequent post.