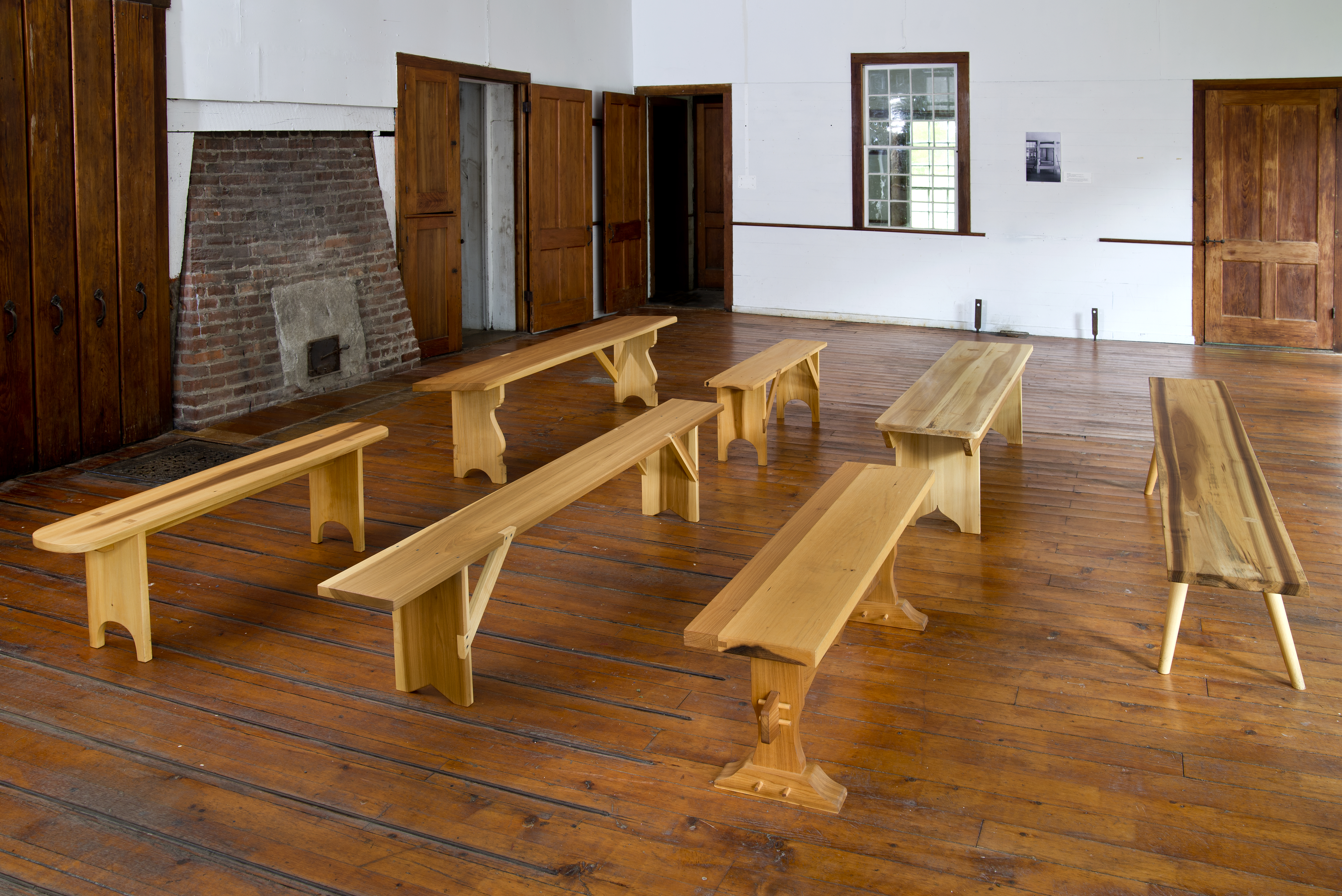 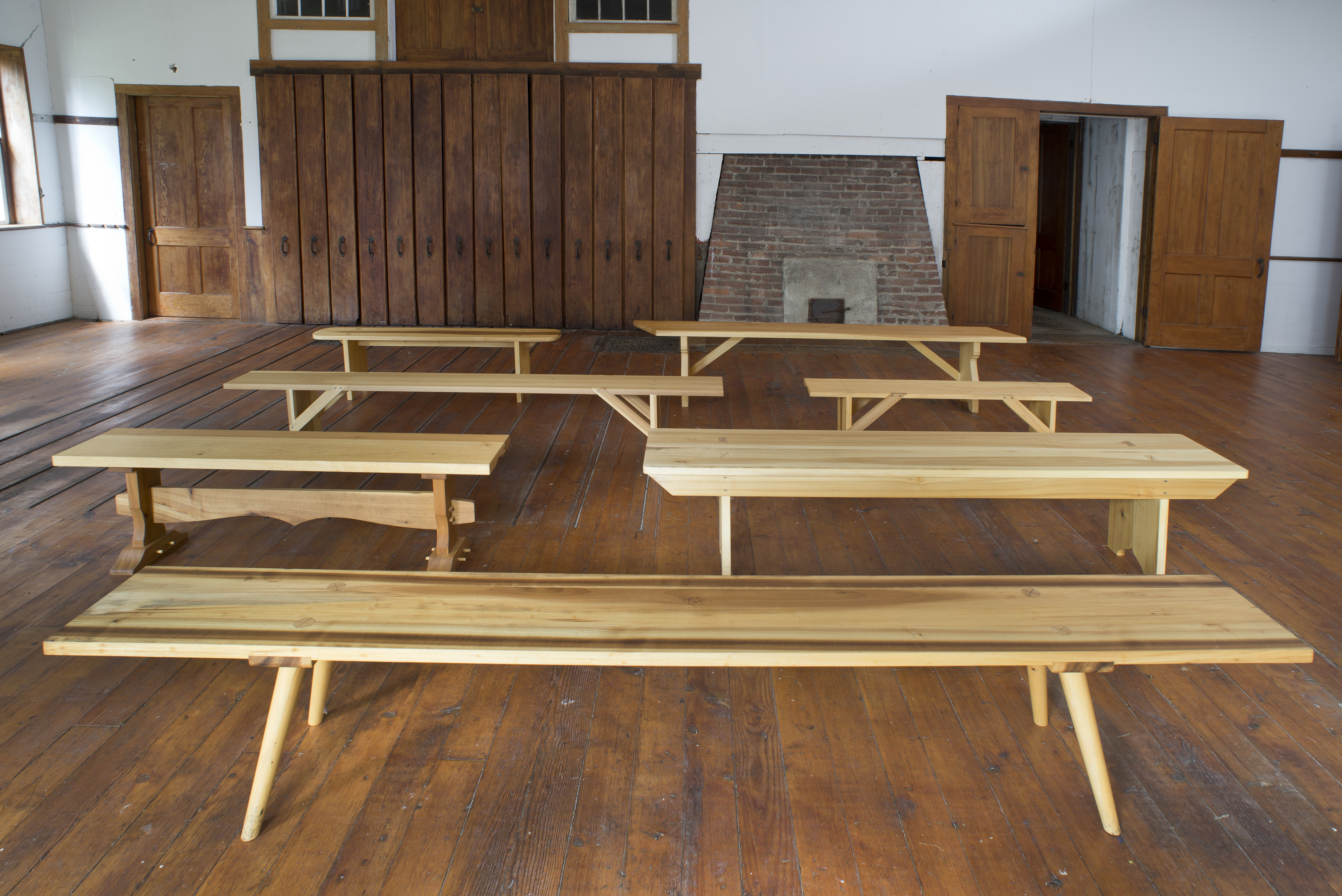 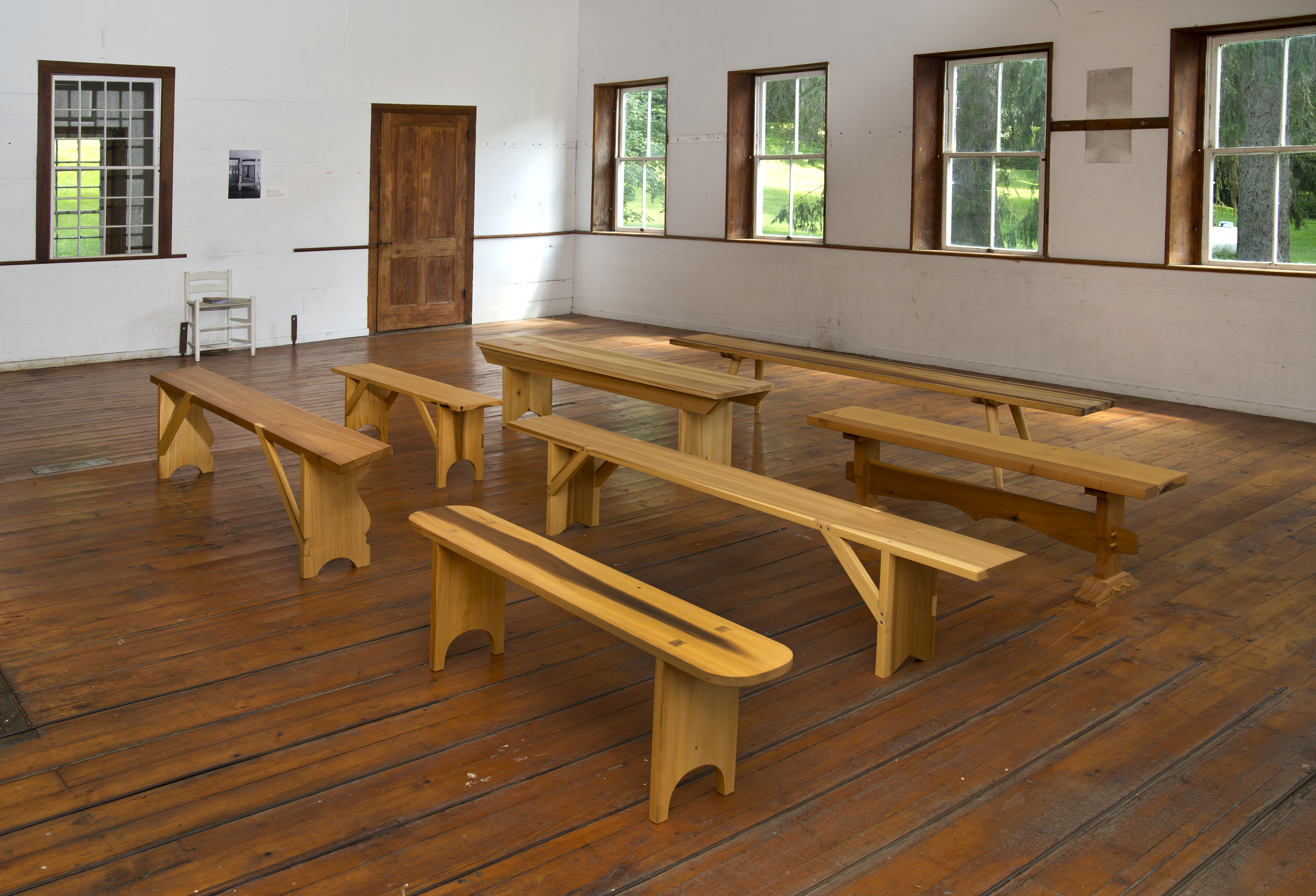 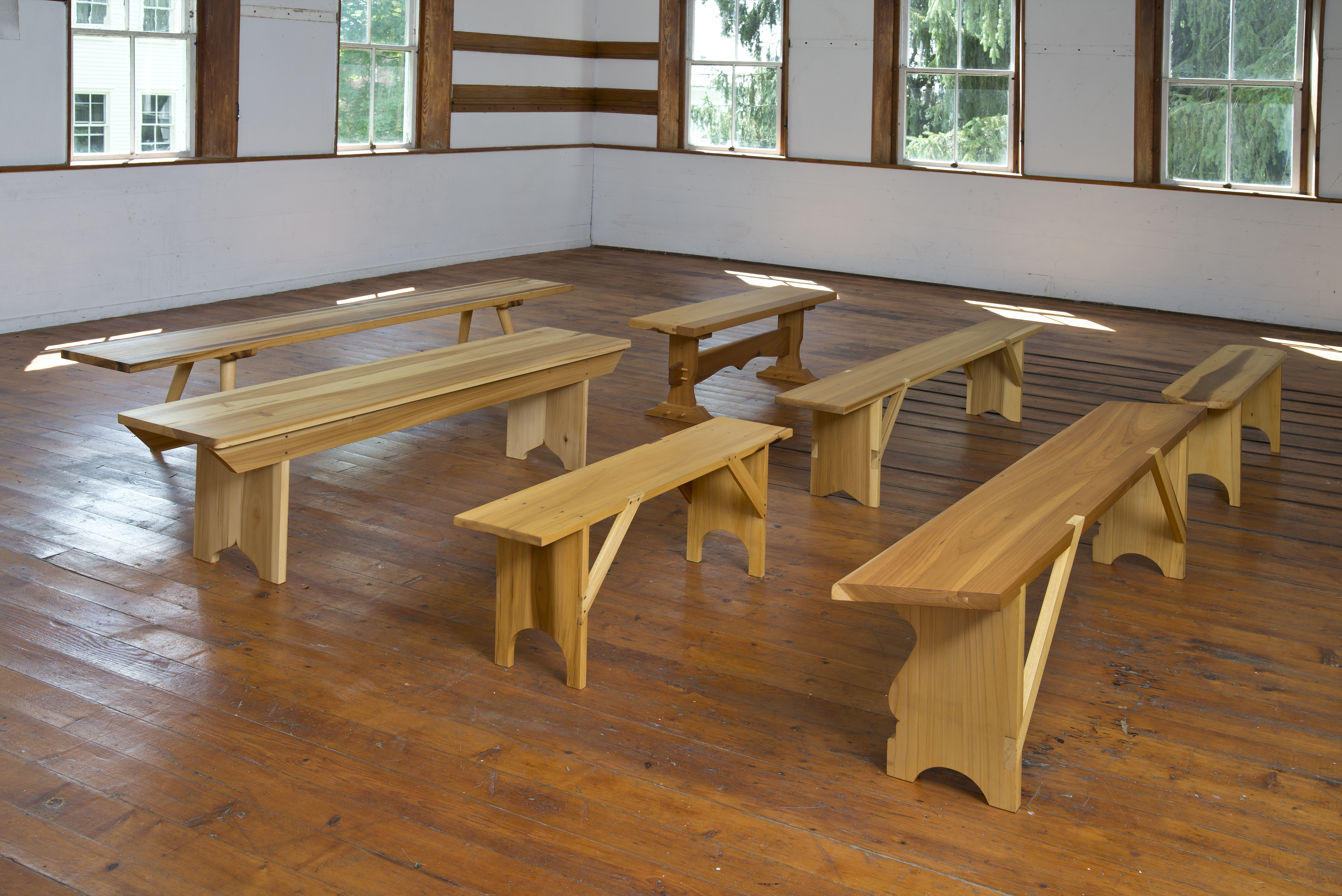 Artifacts from the museum's collection were selected by Francis Cape for display in addition to the benches. 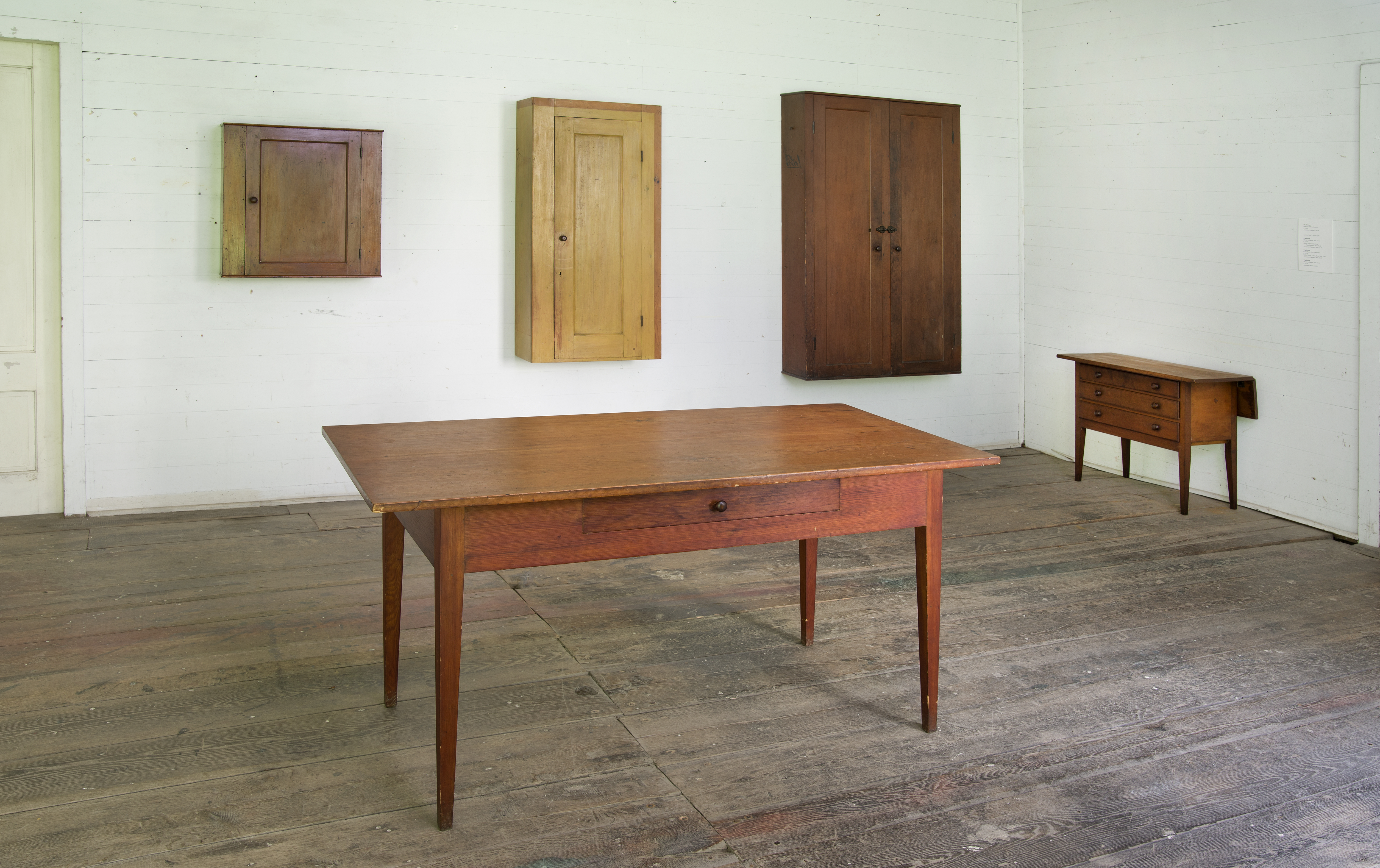 Another view of artifacts selected for display by Francis Cape. 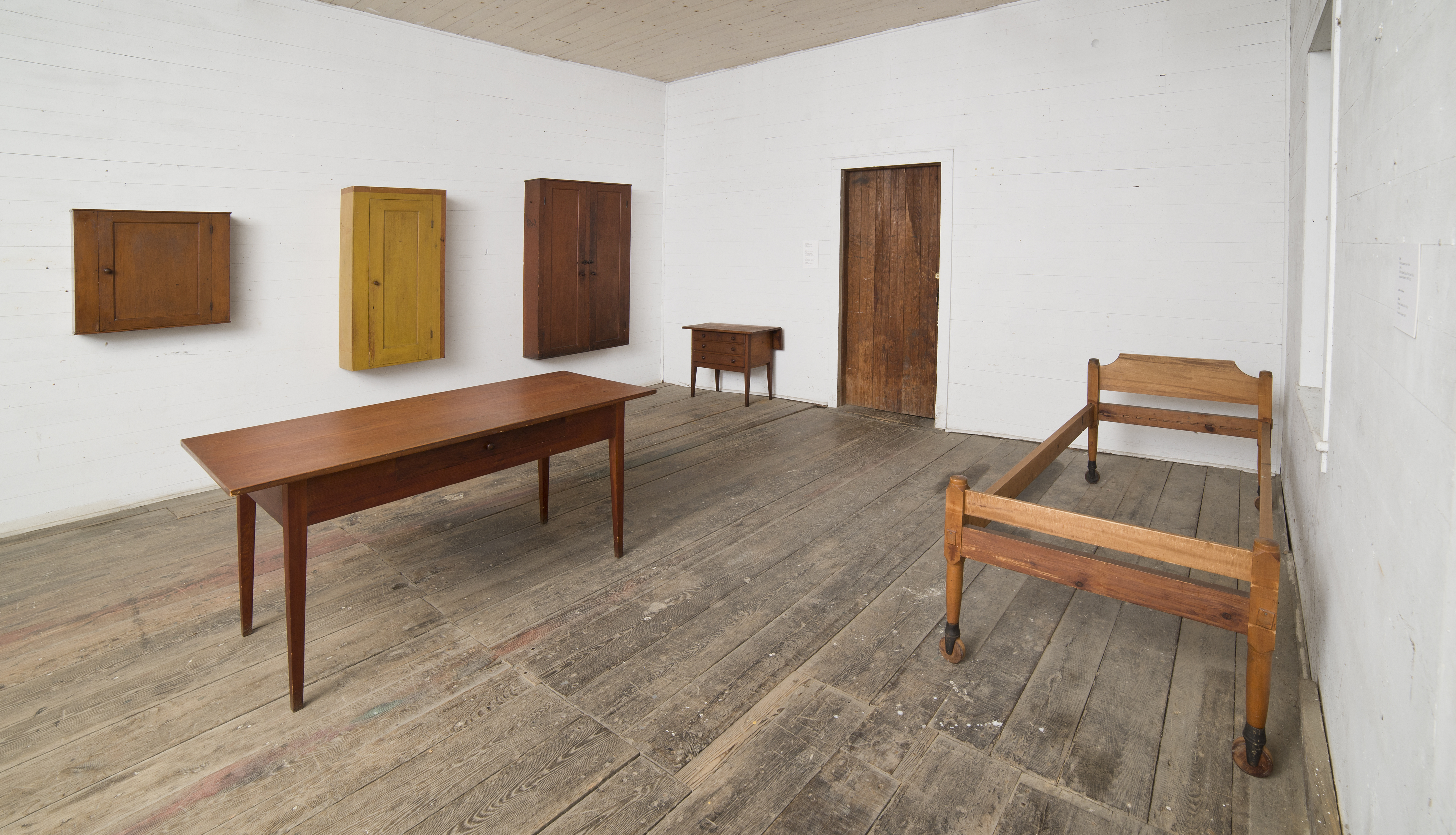 Artifacts from the museum's collection selected by Francis Cape for display. 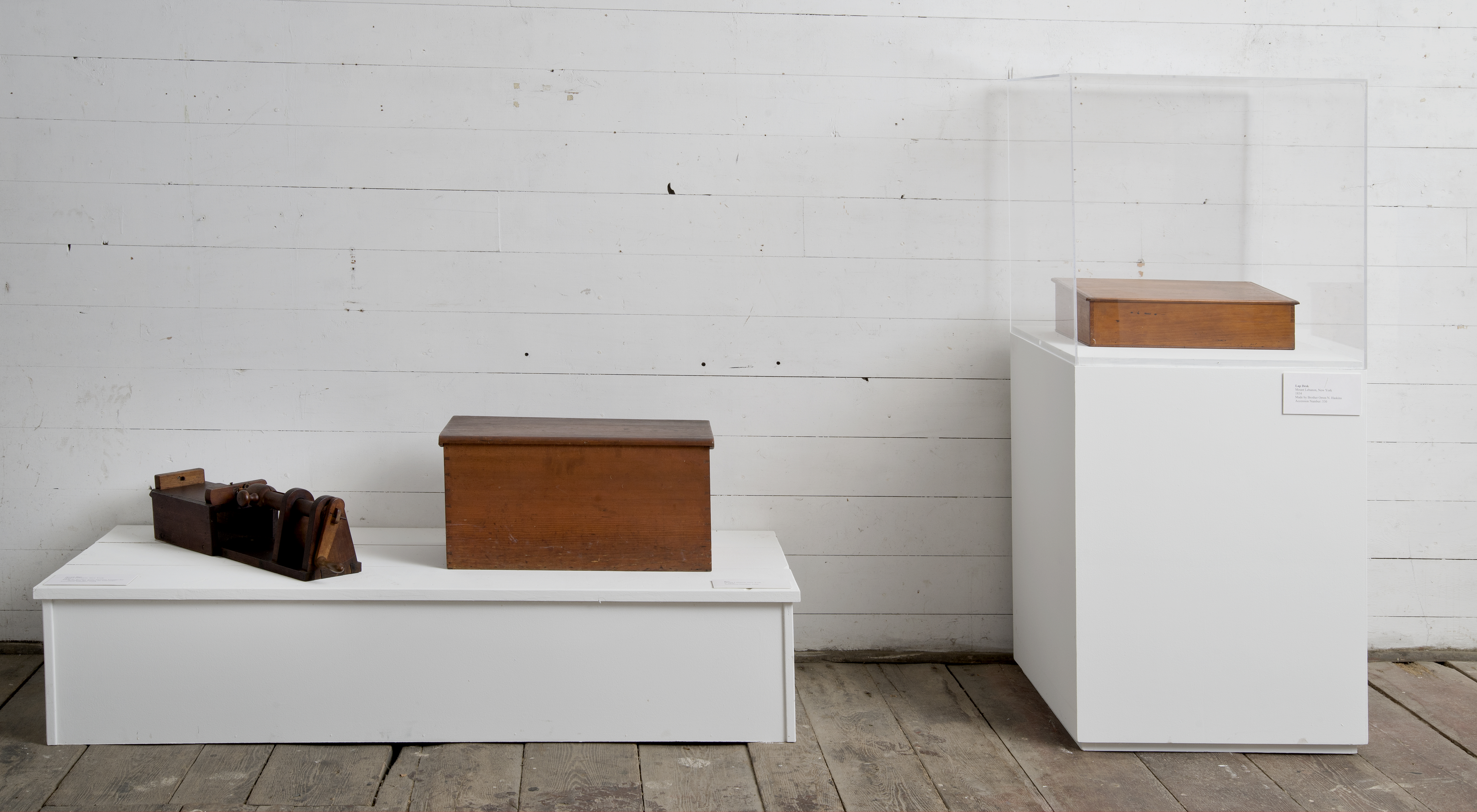 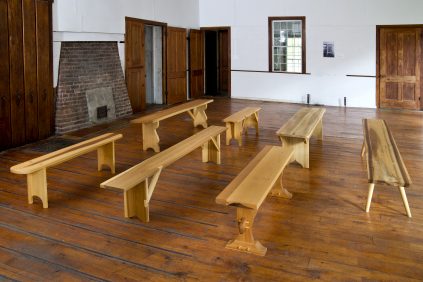 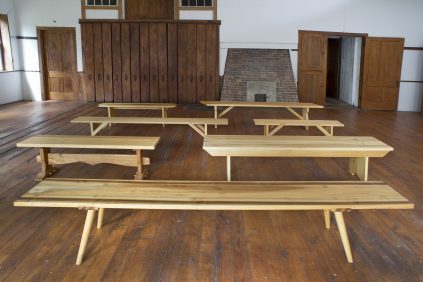 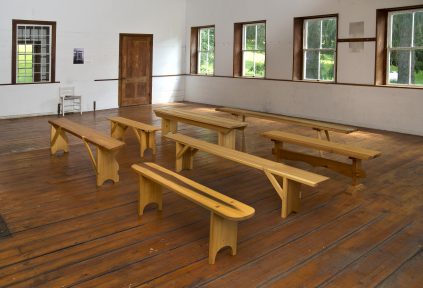 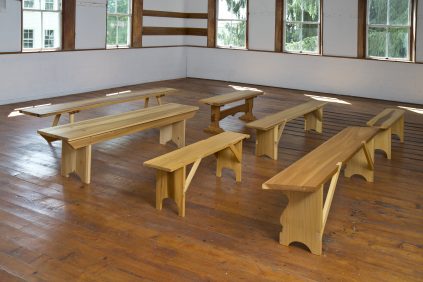 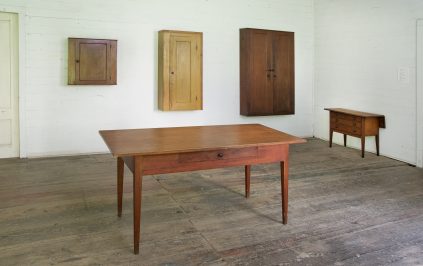 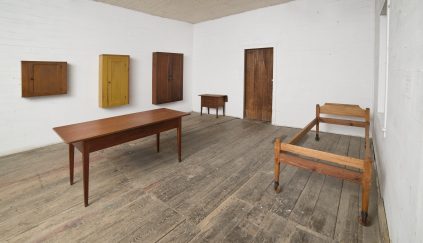 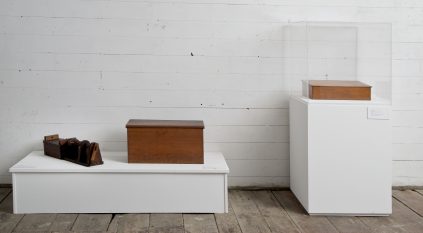 Utopian benches is about communalism as opposed to individualism. A bench is a seat that we share, it is also non-hierarchical, we sit at the same level. For this project, artist Francis Cape remade benches that were, for the most part, made for and/or used by communal societies. Cape made twenty-five benches overall. Seven were on view in the Shaker Museum | Mount Lebanon installation, including one based on a Mount Lebanon design.

The work focuses on nineteenth century American intentional communities, particularly those with a craft tradition, most famously the Shakers, but also the Amana Inspirationists, the Zoar Separatists and the Harmony Society. Cape’s intention was for the benches, as shared seating, to represent community and, as examples of craftsmanship, to propose reconsideration of value. The project also addressed the legacy of resistance to capitalist-driven individualism that formed the founding ideals of American groups once referred to “communisms” and “socialisms.” As such, it advocated ways in which an increasingly outmoded category of furniture, the bench, might be instrumental in exploring the importance of community and collective ownership. The benches were constructed from poplar grown near Cape’s studio in Narrowsburg, New York.

Francis Cape was trained as a woodcarver before receiving his MFA from Goldsmiths College. The subjects of his recent works have been the flooding after Hurricane Katrina and Utility Furniture, designed and produced in Great Britain during and after World War II. His works have previously been exhibited at Prospect I, New Orleans; the St. Louis Art Museum; MOMA P.S.1; The Aldrich Museum of Contemporary Art; Eli Marsh Gallery, Amherst College; Contemporary Arts Center, Cincinnati, OH. In 2010 Cape was awarded a Pollock-Krasner Foundation Artist’s Grant. He lives and works in Narrowsburg, NY.

To learn more, click here to view a PDF of the illustrated booklet that accompanied the exhibition. We sit together, Utopian benches from the Shakers to the Separatists of Zohar, published with the Princeton Architectural Press, extends the descriptions of the communities and includes measured drawings for individual benches, as well as both installation and detailed photographs.