Back to Search Results
NEXT 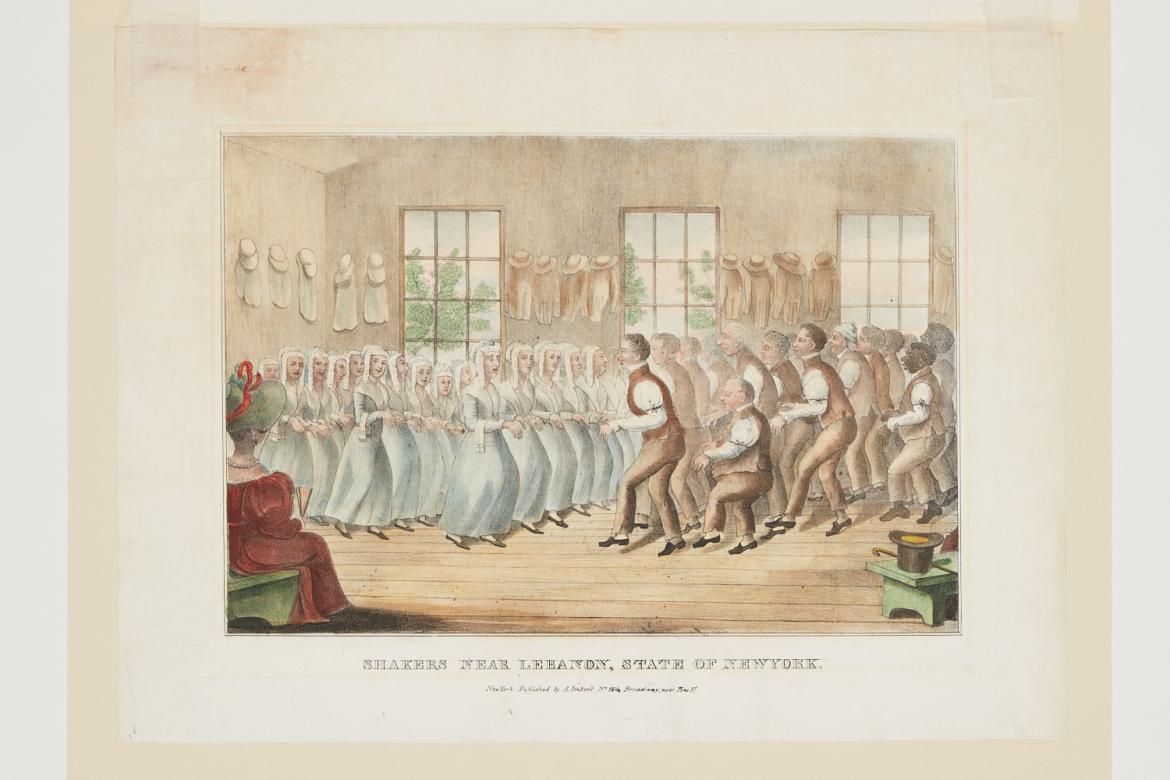 Hand-colored lithograph, matted. View of Mount Lebanon Shakers dancing at a worship meeting in the (1824) meetinghouse. Three rows of sisters at left, and three rows of brethren at right; the brothers in the last row are African-American. The sisters wear white dresses, caps, and neckerchiefs, with a white handkerchief folded over their right arms. The brethren wear brown waistcoats and trousers, and white shirts with a ribbon tied around their left biceps. In the foreground are green benches. Seated on the bench at left is a woman wearing a red, high-waist dress with puffed sleeves and lace trim, pearl necklace, and green bonnet with green and red ribbons, holding a fan in her hand. On the bench at right are a top hat and cane; only part of a man's leg can be seen. Three windows at the rear, between which are peg rails on which are hung the Shakers' hats, bonnets, and jackets. At upper left, the curve of the rounded meetinghouse walls can be seen. Titled at the bottom, "Shakers Near Lebanon, State of New York." and "New York Published by A. Imbert No 104 Broadway, near Pine St."

Nearly 20 different versions of this view of Shakers dancing in the Mount Lebanon meetinghouse exist, including versions published by lithographers Milbert, Currier, and Kellogg. According to scholar Robert P. Emlen, the Imbert version is likely not the original image upon which the others were based, but is among the earliest to have been published. The short, stout brother in the middle row is commonly believed to be Brother David Rowley, of the North Family, who was 4' 10 3/8" tall. Worship meetings held open to the public were conducted by each Shaker village's Gathering or Novitiate Order, which served as a conduit to gather new converts and prepare them for Shaker life. At Mount Lebanon, the North Family was the Gathering Order, and thus its members would have been seen by the artist. Also of note are the two people of color at right; the Shakers accepted any willing converts to the faith. Blog post discussing the Shaker Dance prints: https://shakerml.wordpress.com/2017/03/01/reading-a-print-shakers-their-mode-of-worship/. Reference: Robert P. Emlen, "The Shaker Dance Prints," published in IMPRINT (Journal of the American Historical Print Collectors Society), Fall 1992 (17:2).