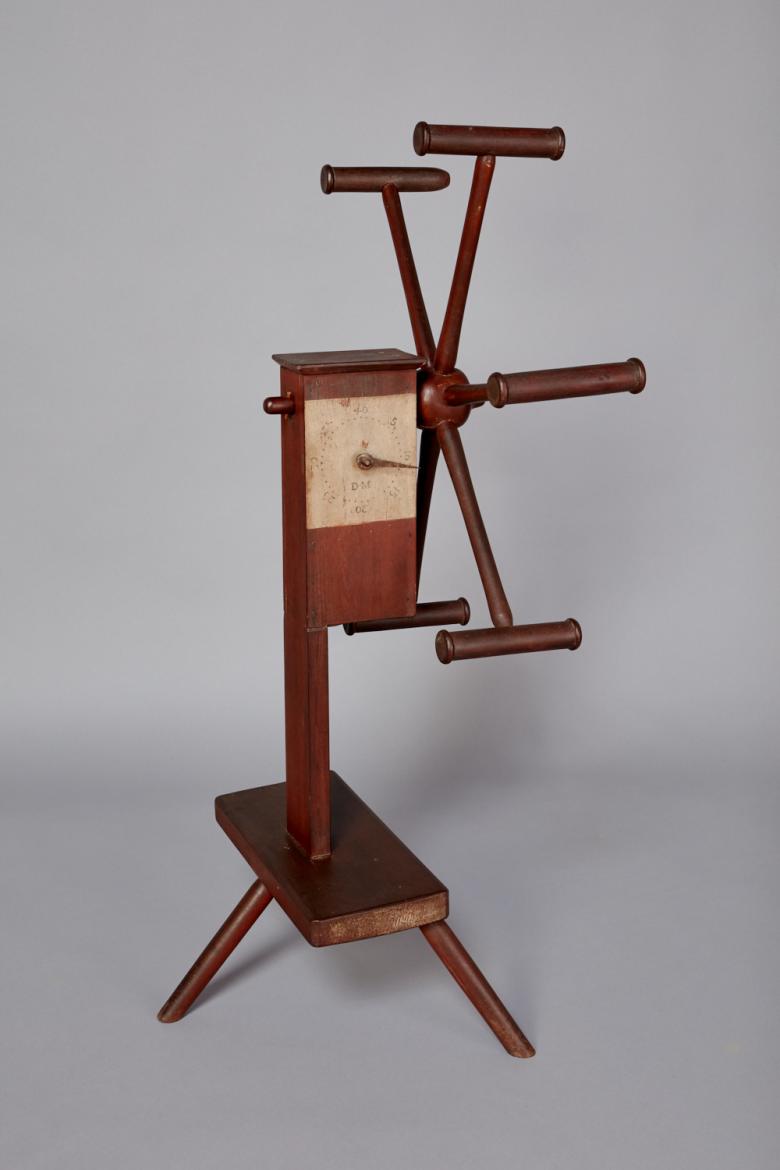 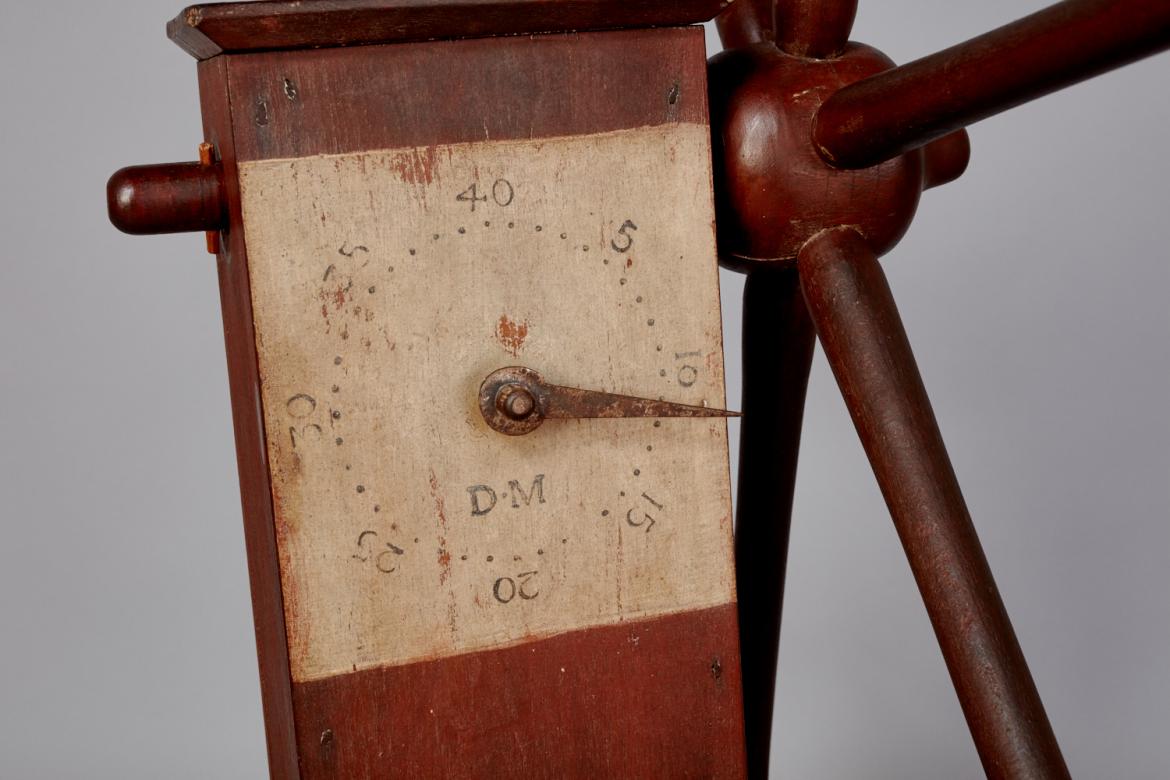 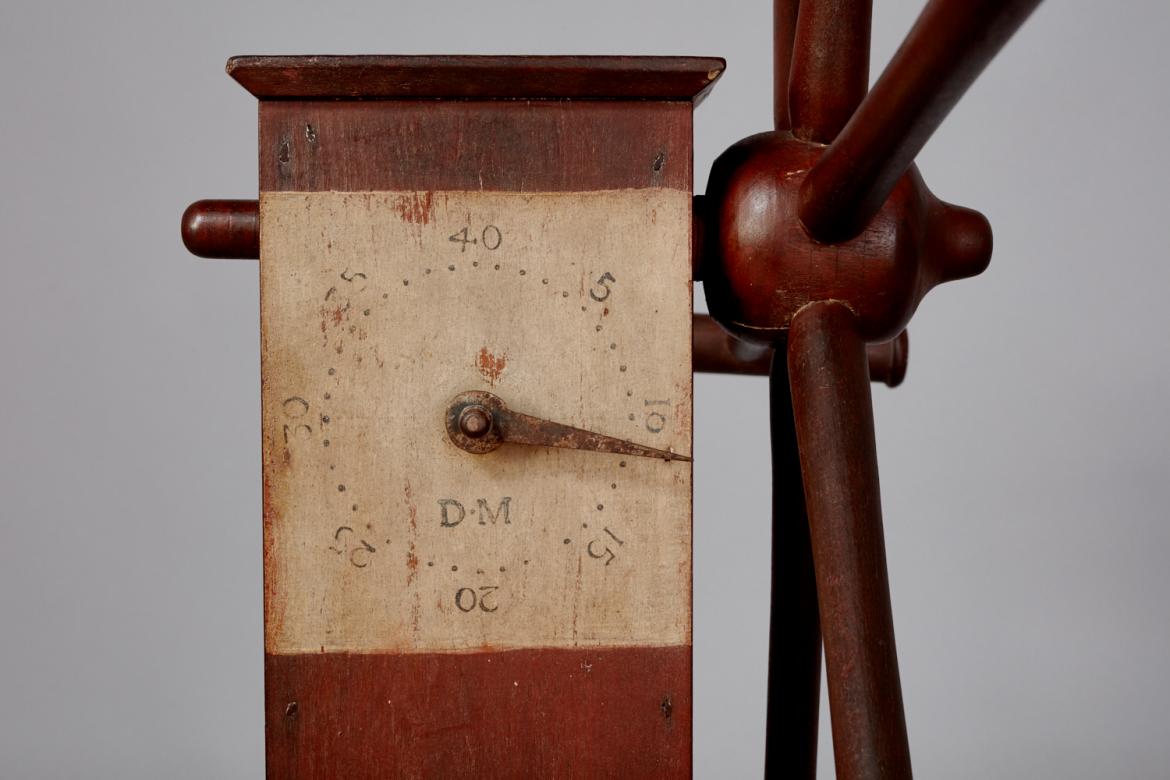 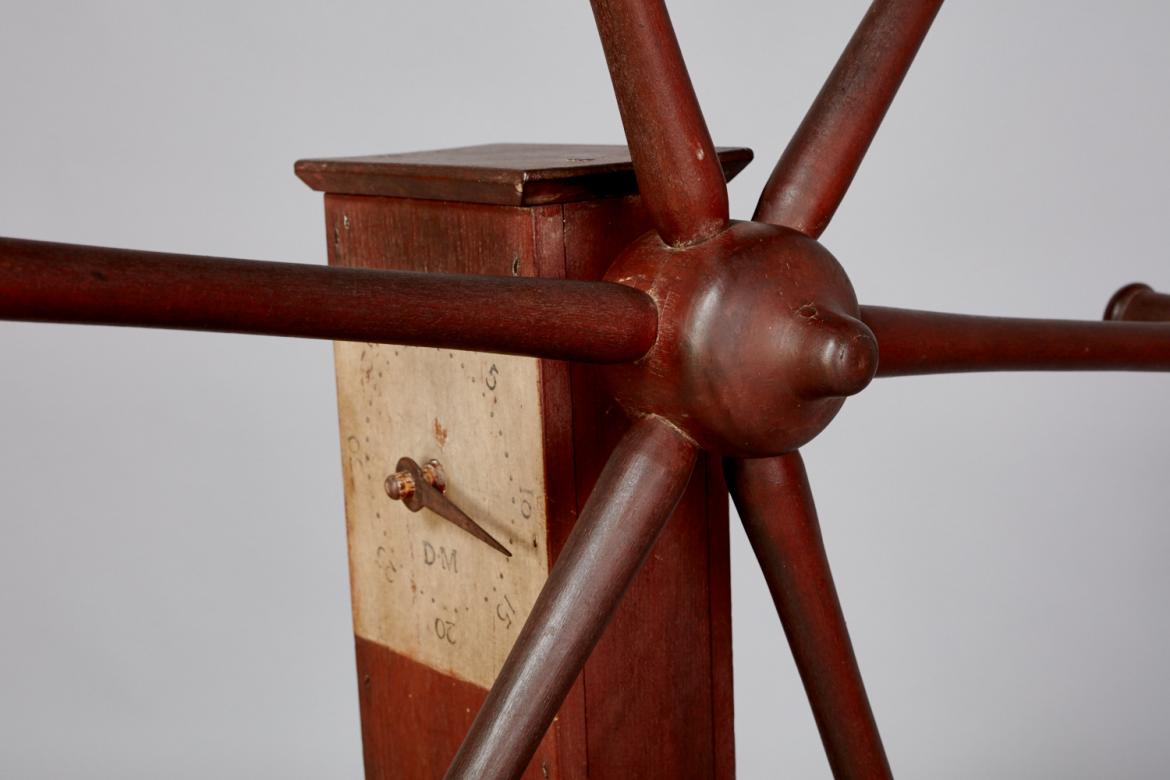 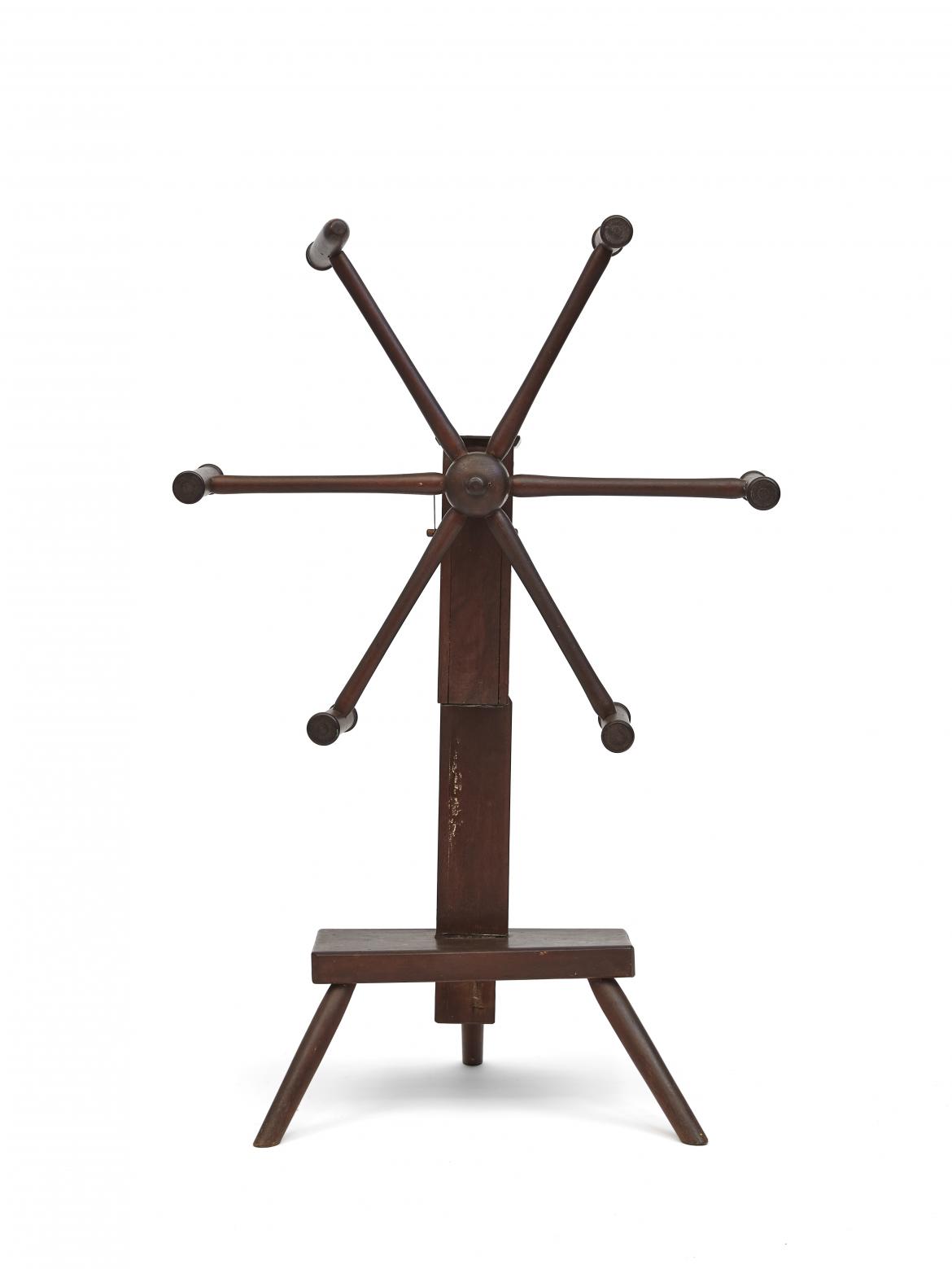 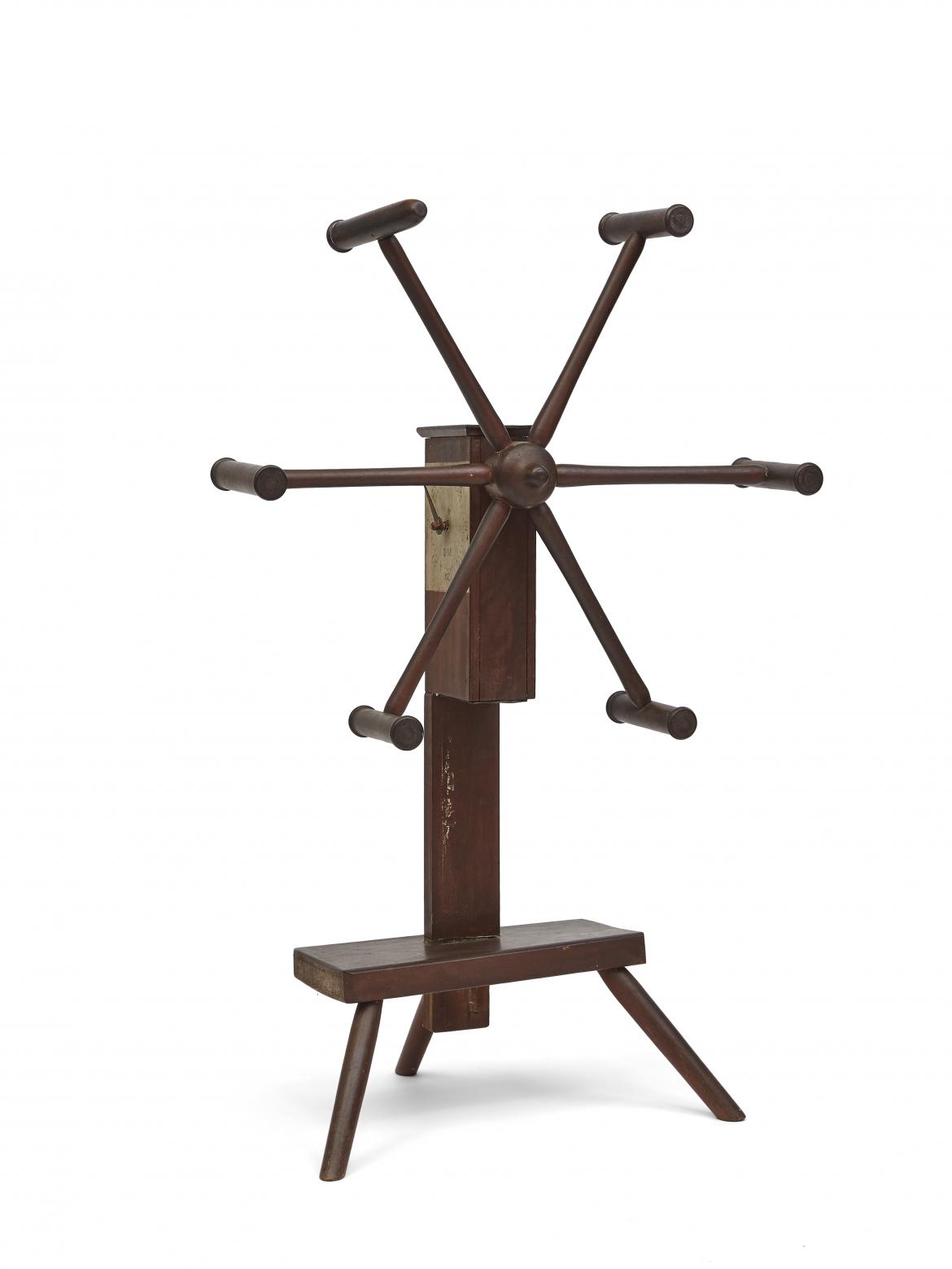 Cherry with a leather cover and iron screws. Composed of six spokes with "spools" centered perpendicularly on the spoke ends. Spokes mortised into a hub and shaft which is threaded. Threads turn a gear wheel when the reel is turned and a clock hand (missing) on the gear wheel shaft records the number of revolutions of the reel. Clock-like face painted on the side of the gear housing behind the clock hand with numbers five to forty, counting by fives.

Shaker sisters used reels to unwind thread or yarn either directly from the spindle of a spinning wheel or from bobbins. Reels also measured the length of spun yarn. The arms of reels were the length required to create a six foot section of yarn. When the reel made forty revolutions, a clock hand set in the shaft moved past a flexible sliver of wood, making a snapping sound. The skein was then removed from the reel arms and twisted together to form a "knot" until it was used. Brothers Levi Chauncey (1765-1837) and Henry Dewitt (1805-1855) were both woodworkers at the Mount Lebanon Church Family who were known to have made spinning wheels and reels for sale.[1] This reel is marked on the clock face, "D.M.", the initials of David Meacham, Sr. who served as the Office Deacon (later called Trustee) between 1794 and 1807 where he had the responsibility to manage the business transactions between the Shakers and the outside world. The Shakers continued to use his initials to identify products such as spinning wheels, reels, and dippers as being made by them. The stamp used to print his initials or on spinning wheels to impress his initials into the wood, is in the collection of the museum (1950.1683.1). [1] Henry Dewitt, [diary 1827-1855] OC1WHi V:B-97