Large floor loom with four treadle-operated harnesses. Loom made of maple, birch, beech, cherry, pine, leather, iron or steel. Frame secured with mortise and tenon joints locked by spanner-head bolts and nuts. Loom is equipped with a fly shuttle that propels the shuttle from side to side when weaver pulls on an overhead line.

The Shakers used looms to weave a broad range of items, including cloth, blankets, towels, clothing, rugs, tape for chair seating, and poplarware. This loom has four peddles and four heddles and could have been used for making a variety of textiles. The loom was used by Emma J. Neale and was among the items first exhibited in the Emma Neale House. This loom is similar in design and layout to those made in the world. The back part of the frame holds the warp beam, the large spool that holds the unwoven ends of the warps. Passing through the eyes attached to the four heddles, the warm runs around the cloth beam and wind around the lam, the spool that holds the woven fabric. This loom features a fly shuttle, a spring mechanism that propels the shuttle from one side of the loom to the other by the weaver pulling an overhead line. Installing a fly shuttle on a loom increases the speed with which cloth could be woven. The weaver rigged the four heddles to create a pattern in the weave, such as a twill or a herring-bone pattern. With the peddles the weaver controlled which warps were raised at each pass of the weft. The loom is currently rigged for a plain (or tabby) weave, which required the use of only two of the heddles. Henry DeWitt (1805-1855) of the Church Family, Mount Lebanon Shakers built a number of spinning wheels and looms through the 1830s and until 1845. There is a good possibility that he built this loom, which is similar to a loom made by DeWitt in the collection of Hancock Shaker Village. 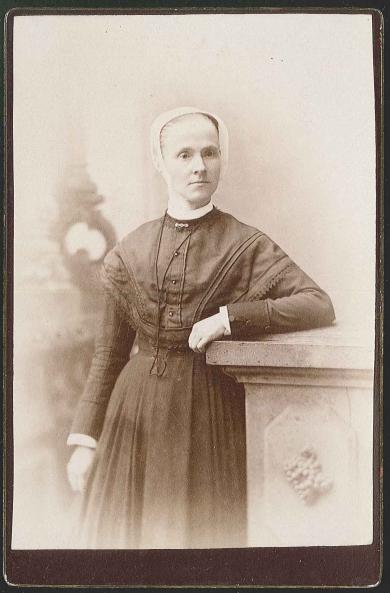