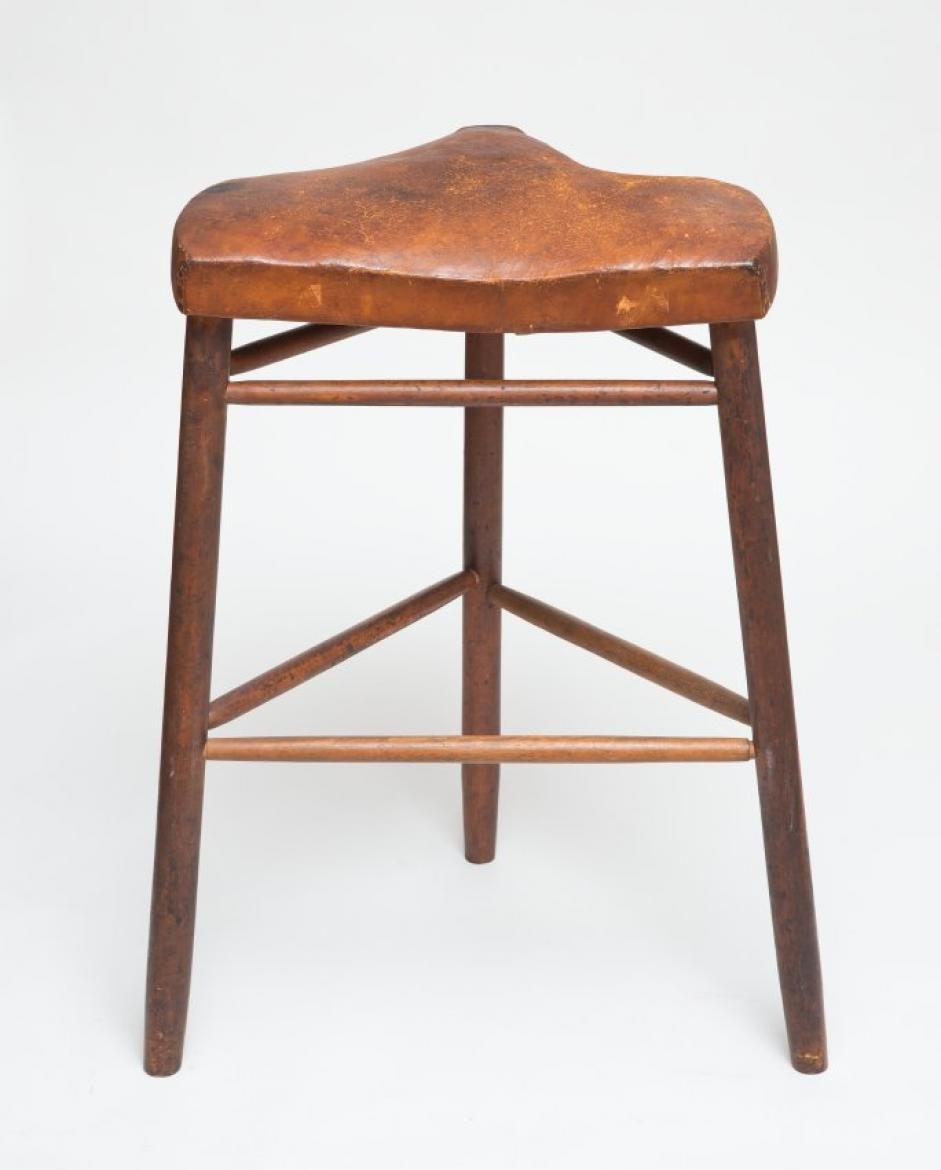 A Three-legged Stool with a Story

Some pieces in the Shaker Museum collection beg to have their stories told. This three-legged stool with its calf-skin covered leather saddle-like seat is certainly one of them. The apparently one-of-a-kind stool was acquired by the Museum’s founder John S. William, Sr. directly from the Shakers sometime prior to the opening of the Museum in 1950. […]

Some pieces in the Shaker Museum collection beg to have their stories told. This three-legged stool with its calf-skin covered leather saddle-like seat is certainly one of them. The apparently one-of-a-kind stool was acquired by the Museum’s founder John S. William, Sr. directly from the Shakers sometime prior to the opening of the Museum in 1950. The Historic American Buildings Survey documented it in an August, 1931 as being used in the bottling and packing room of the Mount Lebanon Center Family medicine shop. When it was acquired by the Museum, an oral history stated that the stool was used at the table where medicines bottles had their cork stoppers driven in prior to labeling, wrapping, boxing, and shipping. It has been called the “corking stool” by staff during much of the Museum’s seventy-year history. In a March, 1945 article titled “The Shaker Look” in Better Homes and Gardens two stools of this design appear in a sketch done to show how this stool might fit “A work-and-play room inspired by a Shaker toolroom” where “leggy stools and a broad Shaker bench are comfortable, sociable.” More recently, visitors to the Museum’s collection have referenced the similarities between this stool and the iconic stools made by the artist Wharton Esherick (1887-1970) during the last twenty years of his life. The maker of this stool, which was probably made during the second quarter of the nineteenth century, has yet to be documented.

The 1931 photograph of the interior of the bottling and packing room shows the stool, partially obscured by a wide packing table, behind a potbellied stove with what appears to be two ash buckets tucked under it. A close examination of the photograph shows that two of the lower stretchers of the stool have been removed – likely broken rather than removed to fit the buckets under it. Museum records indicate that one of the stretchers was missing and had to be replaced. The artist who made the sketch for Better Homes and Gardens drew the stool without its rear lower stretcher, suggesting that the artist had access either to the original stool or to a photograph of the stool with at least one stretcher missing. The Better Homes and Gardens article draws heavily from illustrations and photographs done for the Index of American Design, a Works Progress Administration program during in 1930s that hired unemployed artists to document the country’s material culture. While a number of Shaker pieces – well over 300 – were illustrated for that collection, the stool does not appear to have been included. Shaker Museum is not mentioned in the article and there is no indication that the artist would have seen the stool on exhibition. It remains a mystery as to how it came to be used as an example of a “leggy stool” for a modern day work-and-play room.

In the past few years the Museum has presented three blog posts about Brother Richard B. Woodrow of the Center Family at Mount Lebanon. Brother Richard came to the Shakers as a toddler with his mother Sarah. He was raised by Shaker brothers and by his late teen years had become a skilled carpenter, woodworker, and mechanic. Pieces in the Museum’s collection made by Brother Richard include a beam auger for boring holes for mortises in the timbers used in framing buildings, a shoemaker’s bench, and two pairs of worsted combs for processing long-fiber wool. The design of all of these pieces show a person not only with cabinetmaking and mechanical skills, but the sensibility of a sculptor. Two of the pieces he made have padded leather seats. The sculpted shape of the saddle-like seat on the stool, its leather-covered horsehair-padded seat, and the interesting way that the stretchers are staggered to avoid having their tenons intersect and weaken the joint, all fit in Brother Richard’s skill set. While no clear association can be made between this stool and Brother Richard Woodrow, he seems to be the likely maker of the stool.

In 2015, Shaker Museum presented an exhibition titled, Side by Side: Shakers and Modern Design.  In the exhibition, the three-legged stool was paired, side by side, with a three-legged stool made by Wharton Esherick. Esherick began making his stools in the early 1950s as a way to supplement his income between larger commissions. He was known to have set aside small scraps of wood too beautiful to burn for use in carving the seats for his stools. He always carved the seats and when convenient had apprentices turn the legs and stretchers. His stools are certainly much lighter in construction and appearance than the stool in the Museum’s collection. He did not think the stretchers immediately under the seat were necessary to carry the weight of the user and the carving of the seat was meant to be comfortable without the addition of padding and a leather covering. Both Esherick and the maker of the Museum’s stool had to solve the problem of how to have the stretchers join the legs without weakening the stool. Esherick generally put the three stretchers at different levels to avoid having the tenons intersect each other, whereas the Shaker maker merely raised one of the side stretchers to bring its intersection above the point at which the other side stretcher meets the front post. As a link between the Arts and Crafts Movement and the advent of Studio Furniture, Esherick certainly would have been aware of the Shakers, their furniture, and design aesthetic, but there is little to indicate that he was influenced directly by their work.

The “corking stool” certainly has a number of stories to tell – each one remaining somewhat of a mystery. Several years ago the Museum had a replica made of this stool by staff member and cabinetmaker Boyd Hutchison. Staff members finally had a chance to take a seat on the stool and all agreed it was indeed incredibly comfortable – one mystery solved.

One response to “A Three-legged Stool with a Story”