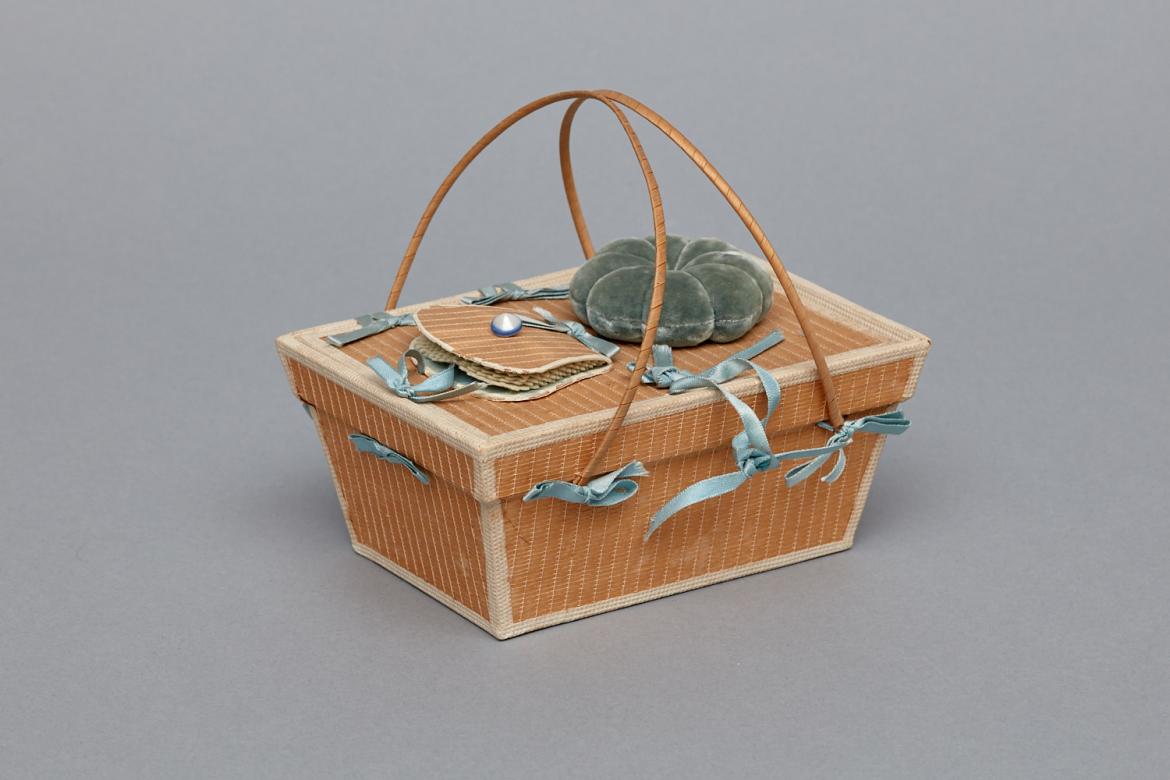 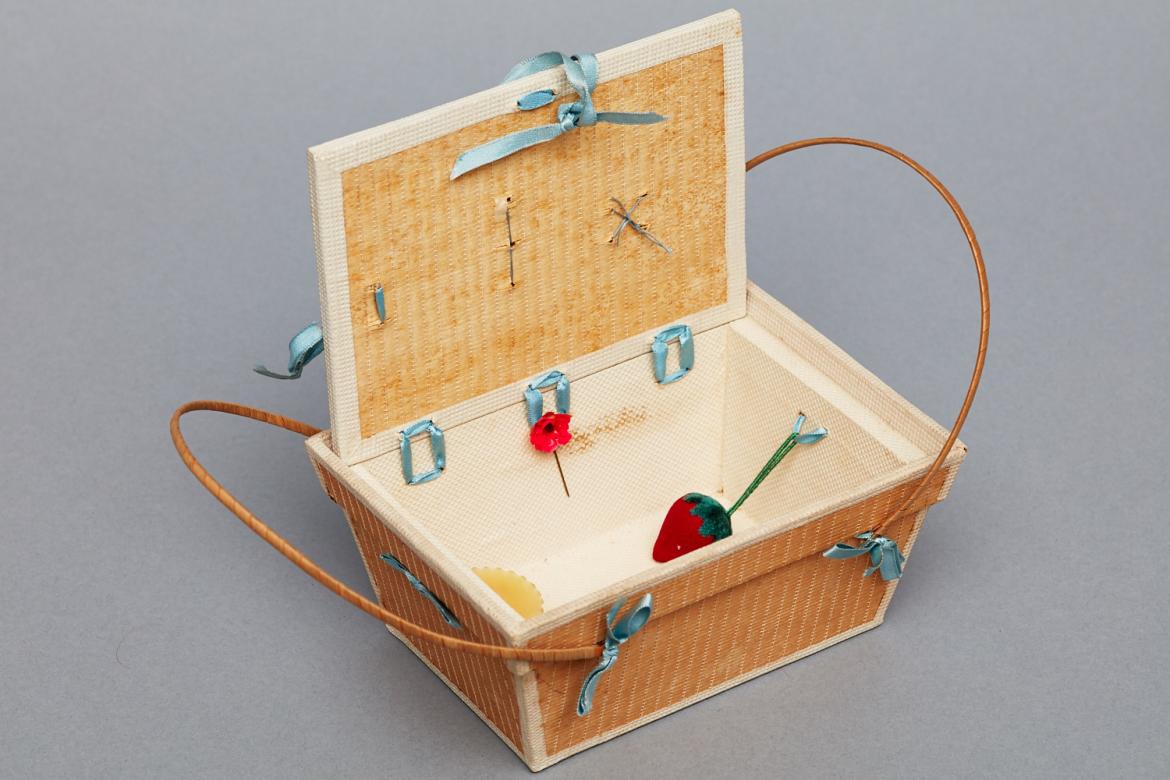 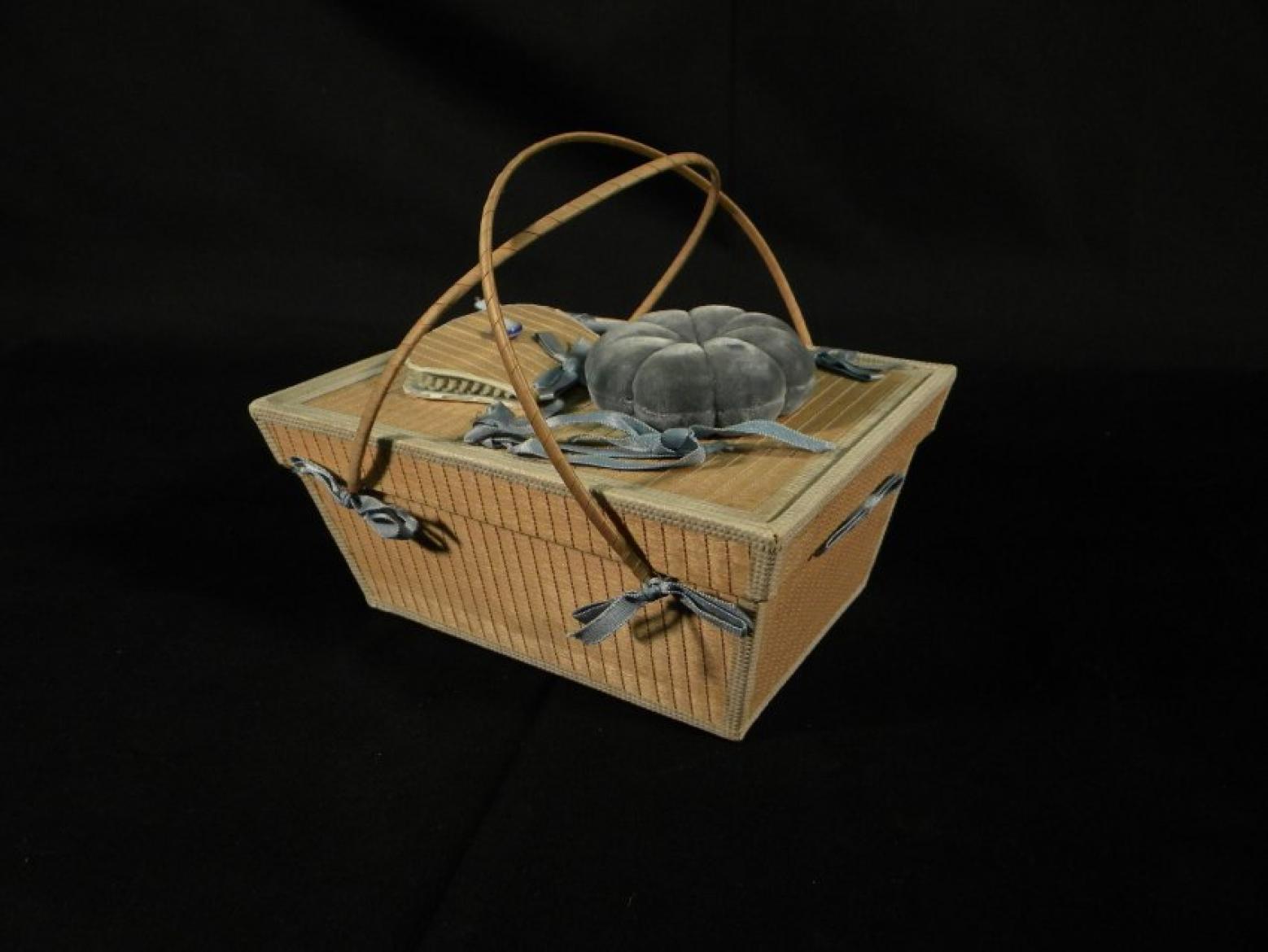 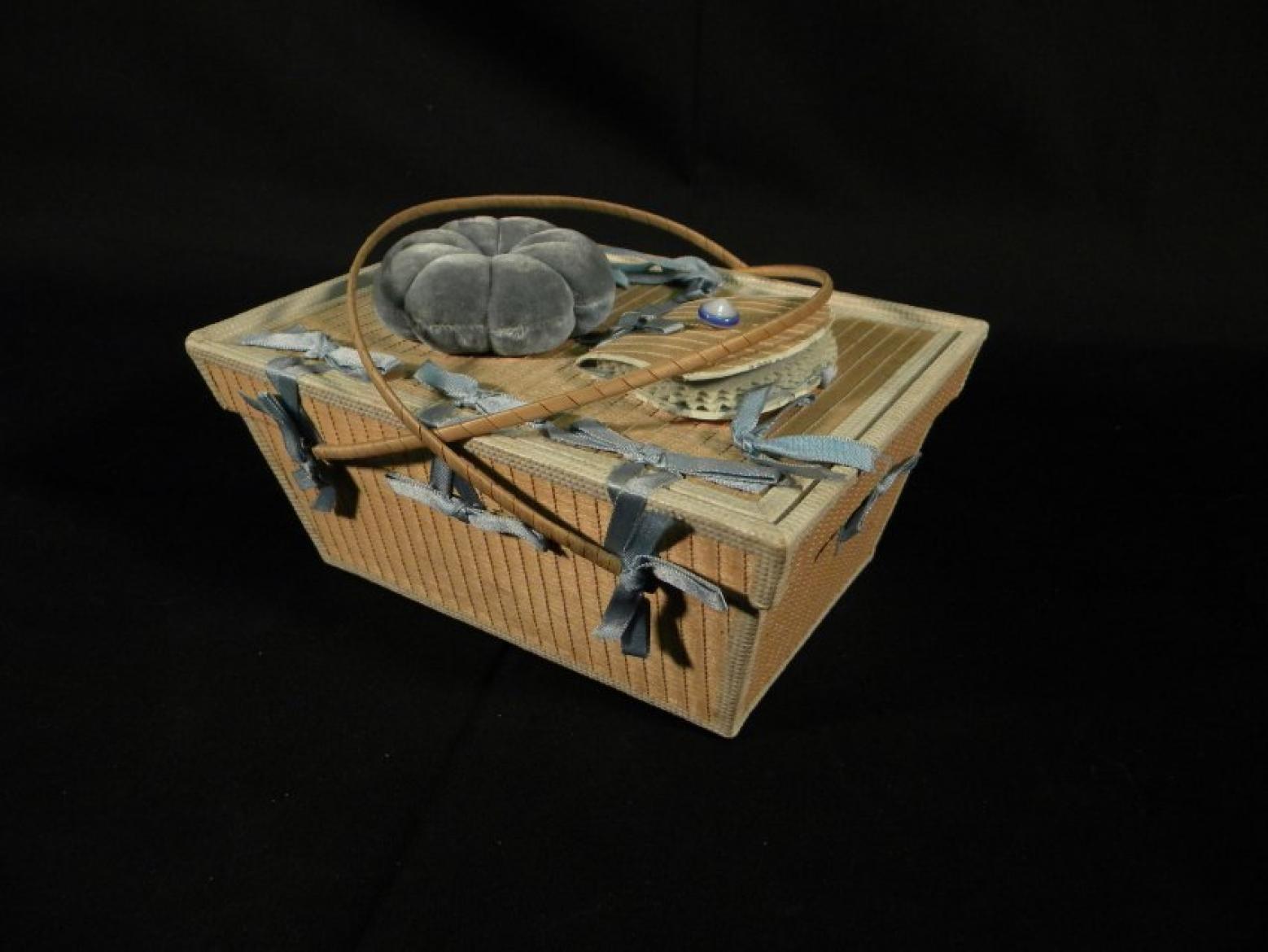 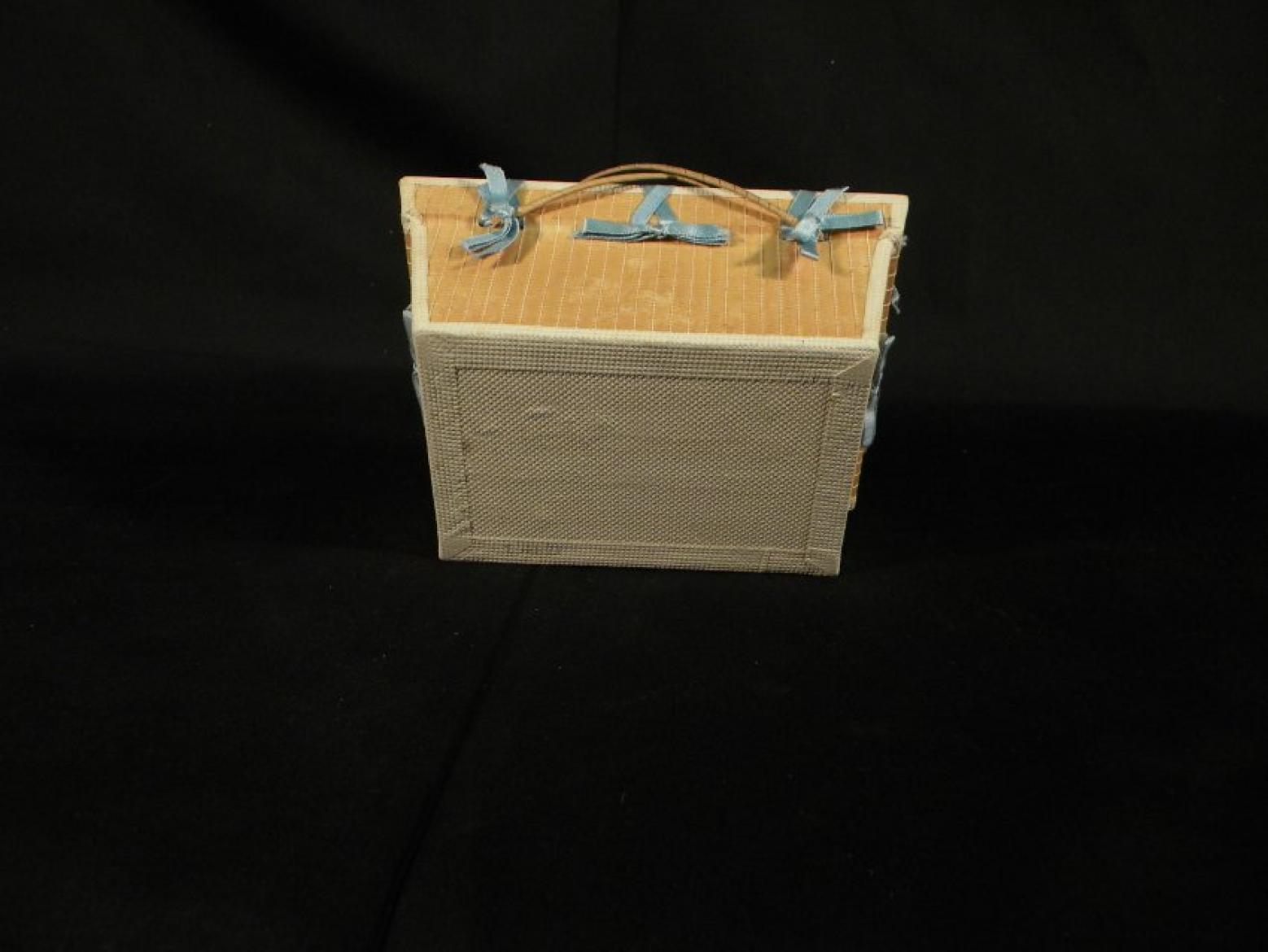 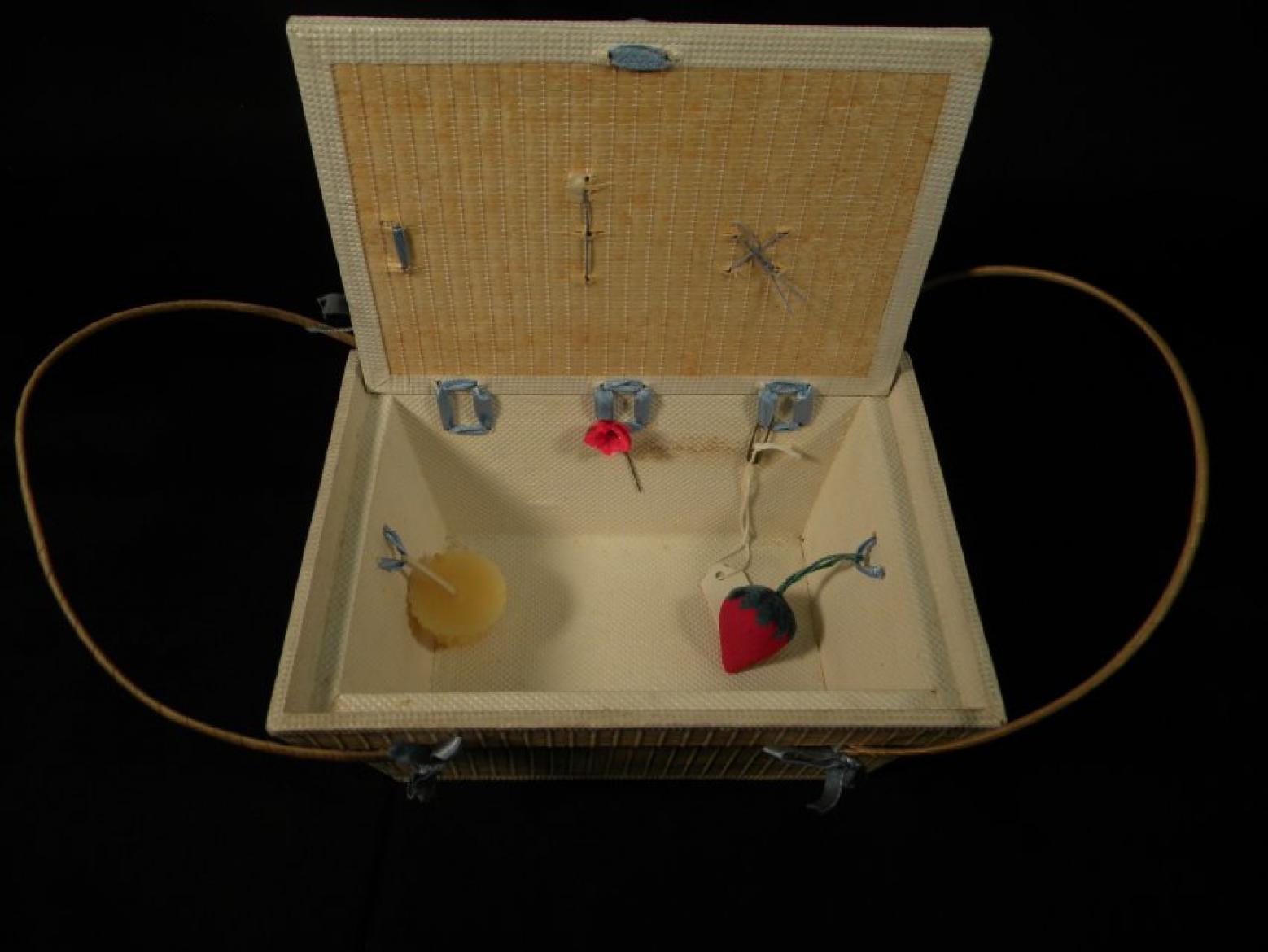 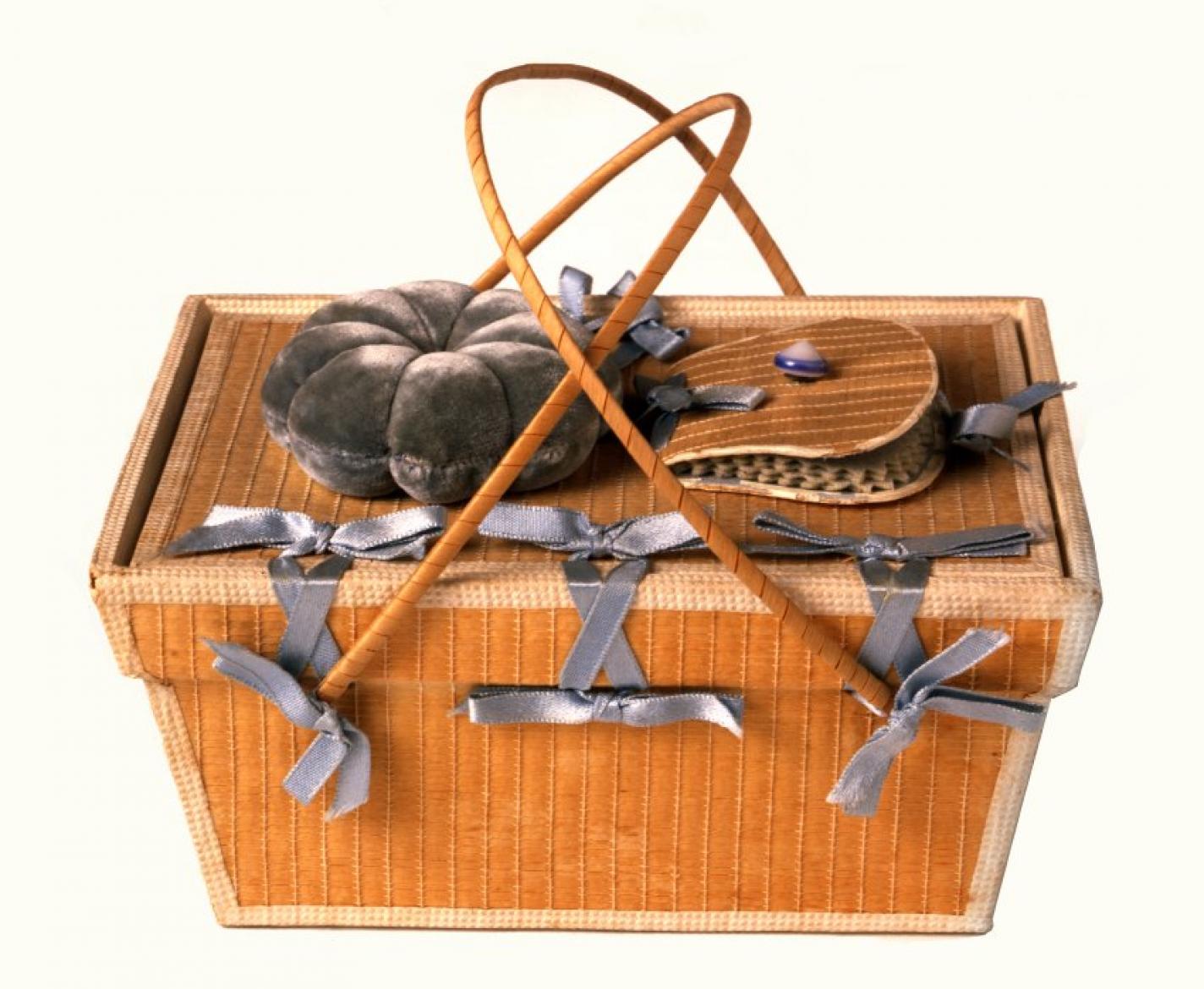 Rectangular woven poplar basket with recessed lid and two arched handles, connecting the long sides of the box. Lid attached with three pairs of light blue ribbon bows on one side. All edges of box, including lid edges, lined with white adhesive paper that has raised circles. Interior lined with same material. Long side that is opposite pairs of bows has two decorative light blue ribbon bows while shorter sides each have one decorative bow. Attached to the lid are an 8-segment light blue velvet pincushion and a purse-shaped needlecase with light blue felt on interior and decorative white and blue bead on exterior. Box contains strawberry-shaped emory and block of wax.

Poplarware became an important source of income for the Shakers after the Civil War. Poplarware sold to tourists as souvenirs shows little of the involved processes that went into its production. The Shakers felled straight poplar trees in the winter, cut the logs into two-foot sections, and split the sections into square posts measuring two inches per side. The posts were then "shaved" in a vertical planer that produced curled thin sheets of poplar. The curled sheets had to be flattened by hand and dried in a warm interior like a laundry room. Until the poplar was dried, it had to be kept frozen so that it would cut properly. Shaker sisters shredded the dried sheets of poplar, creating strips thin enough for weaving on a loom. Initially this shredding was accomplished by hand, but later machines were used. The strips were woven using cotton warps. The woven poplar was then backed with paper and cut into the shapes needed to create the object. In this work or sewing box, sheets of woven poplar were glued to a lidded wooden box to construct the body. The exterior edges and interior sides are covered with glossy white paper. Blue satin-weave silk ribbon binds the handles to the case and forms the hinges for the lid. Added to the top are a blue velvet pincushion and a poplarware needle case. This type of work box appears in a Mount Lebanon gift catalogue titled "Products of Intelligence and Diligence." Dating from around the turn of this century, the catalogue calls this object an "Oblong Work Box," and it cost $1.75. The introduction to this catalogue states: "The hand-made boxes which are shown in this catalogue, are made from the wood of the poplar tree and woven in a style to resemble basket work. They are a combination of neatness and utility, and will commend themselves to lovers of the beautiful." 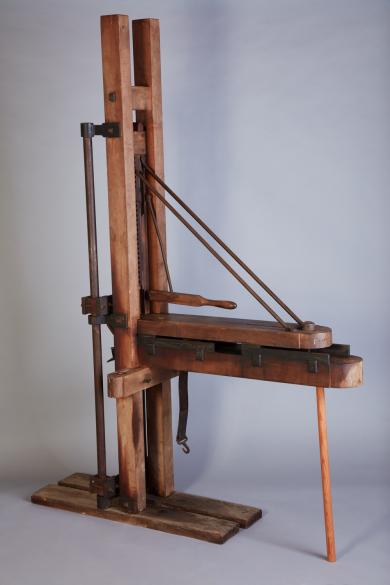 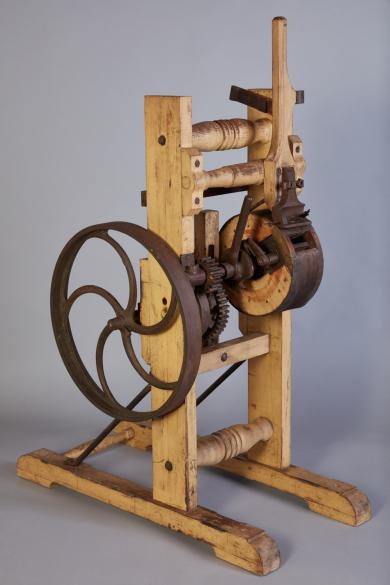