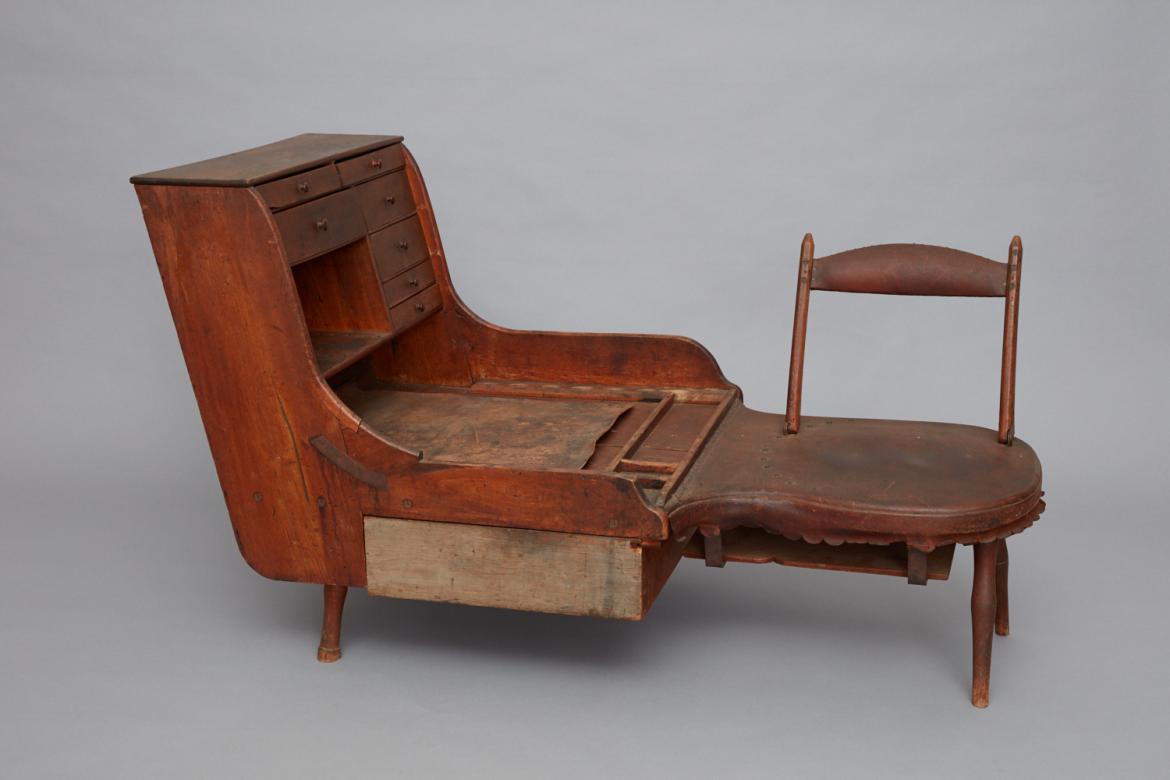 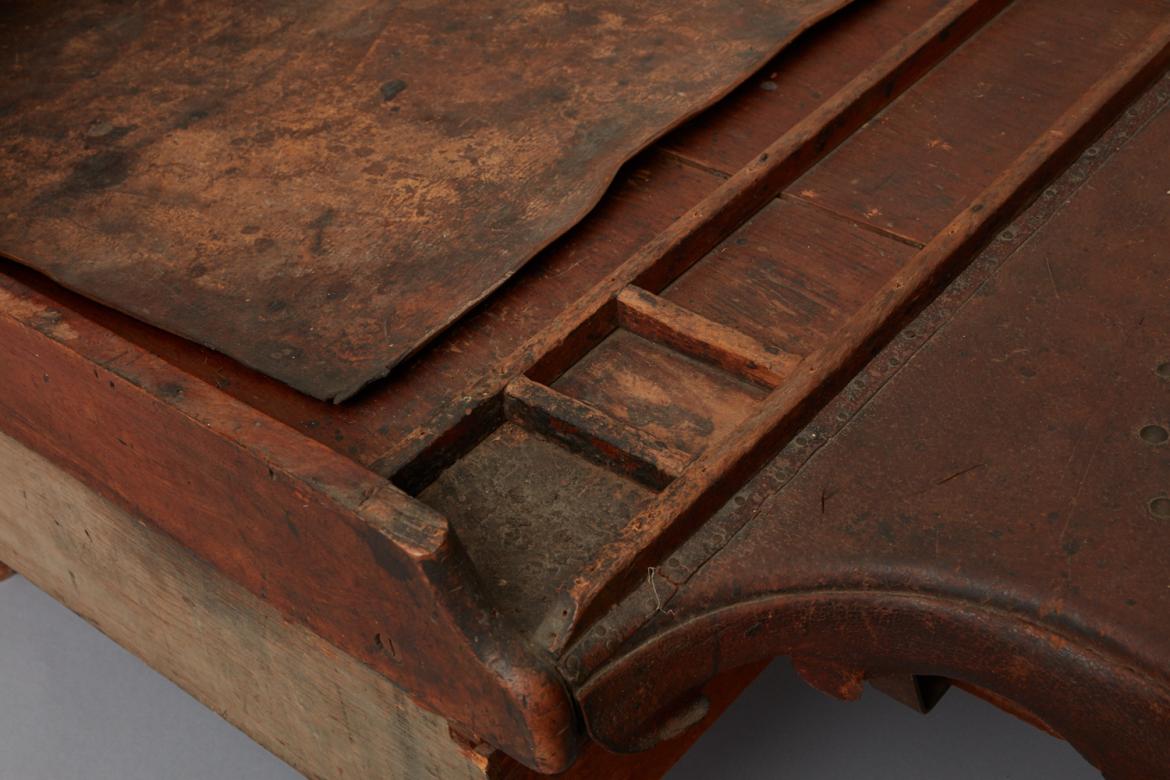 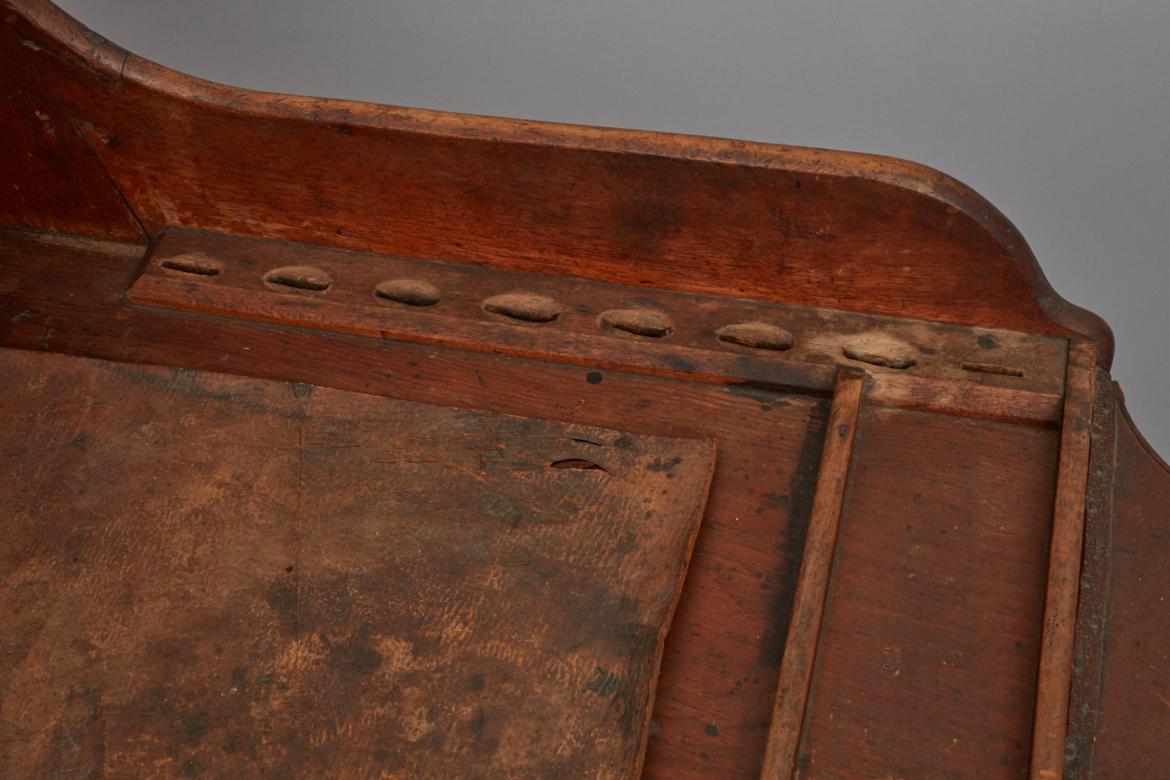 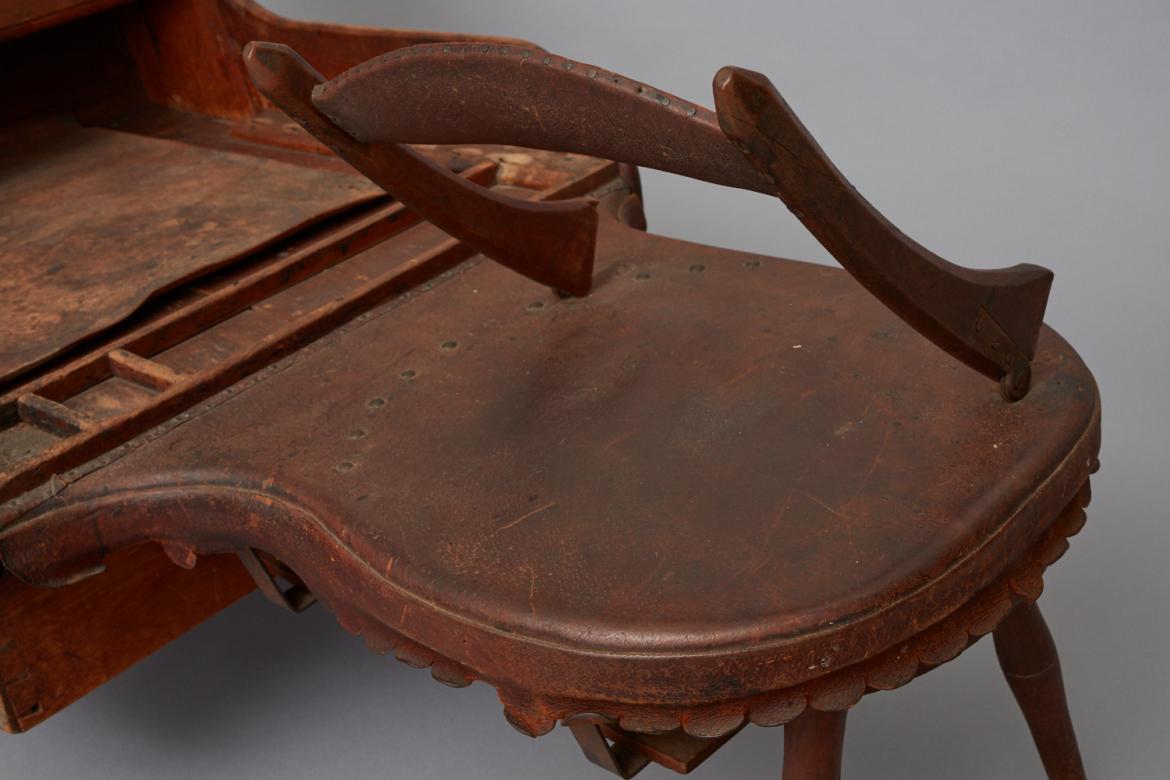 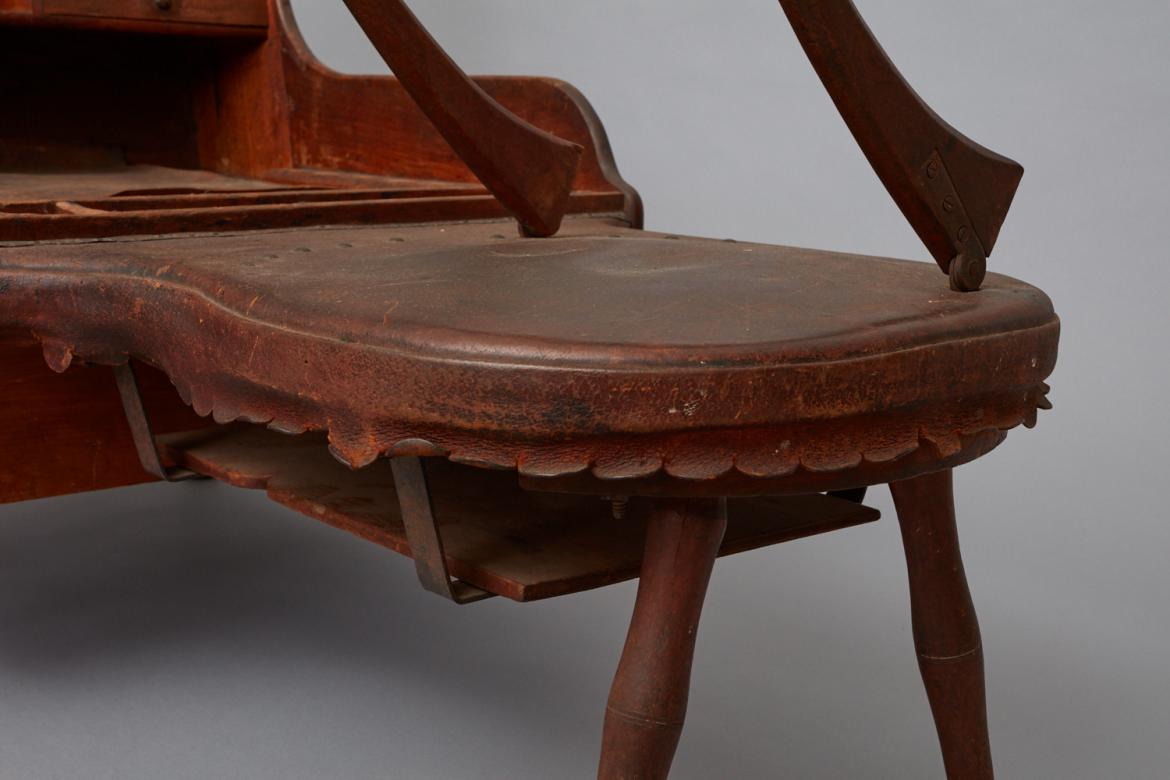 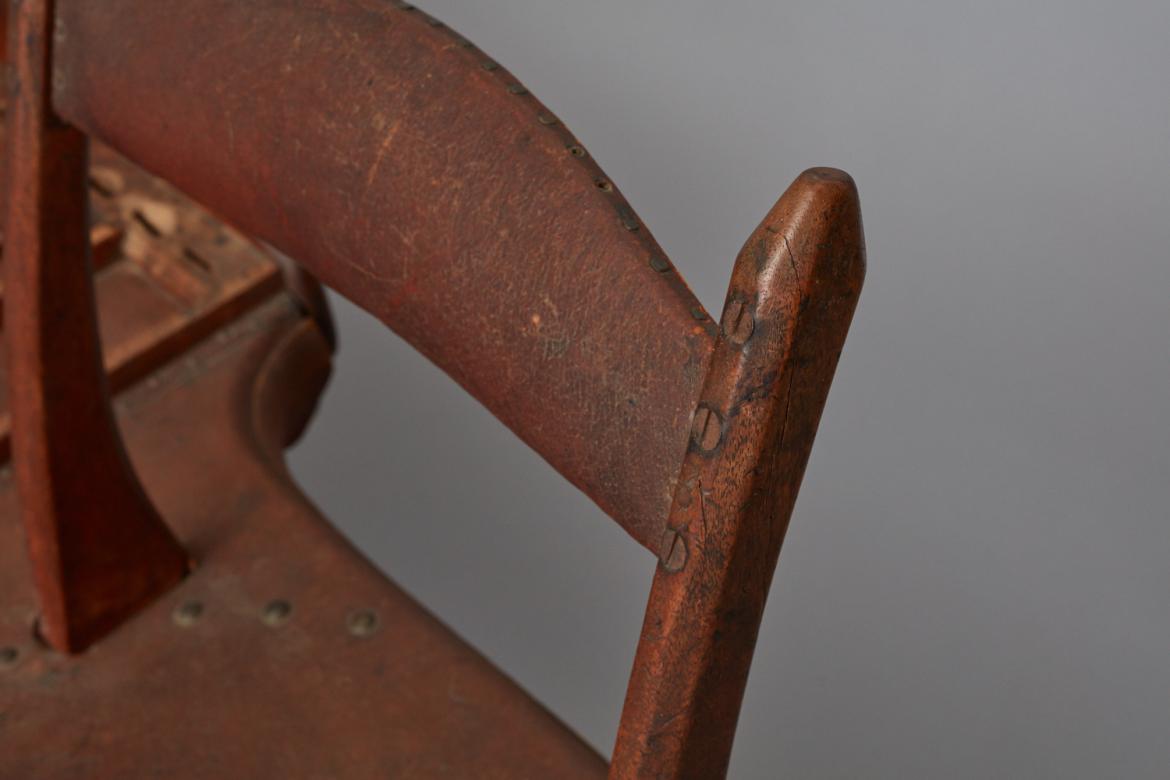 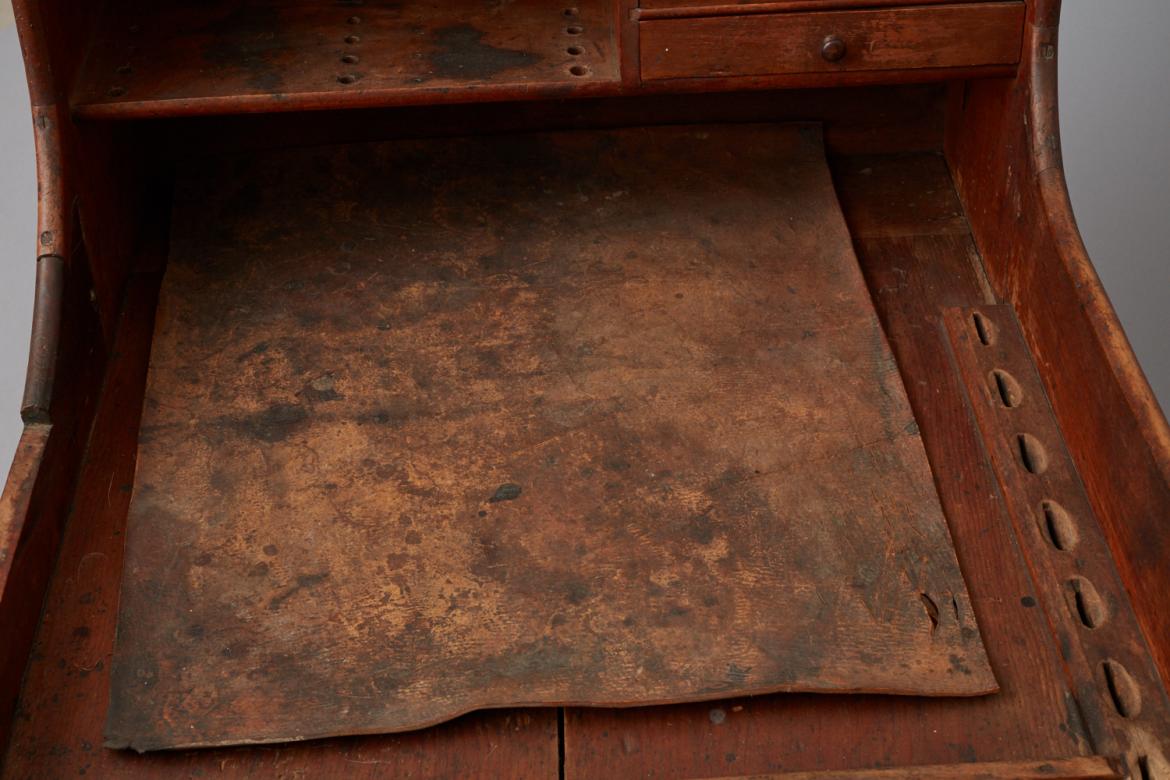 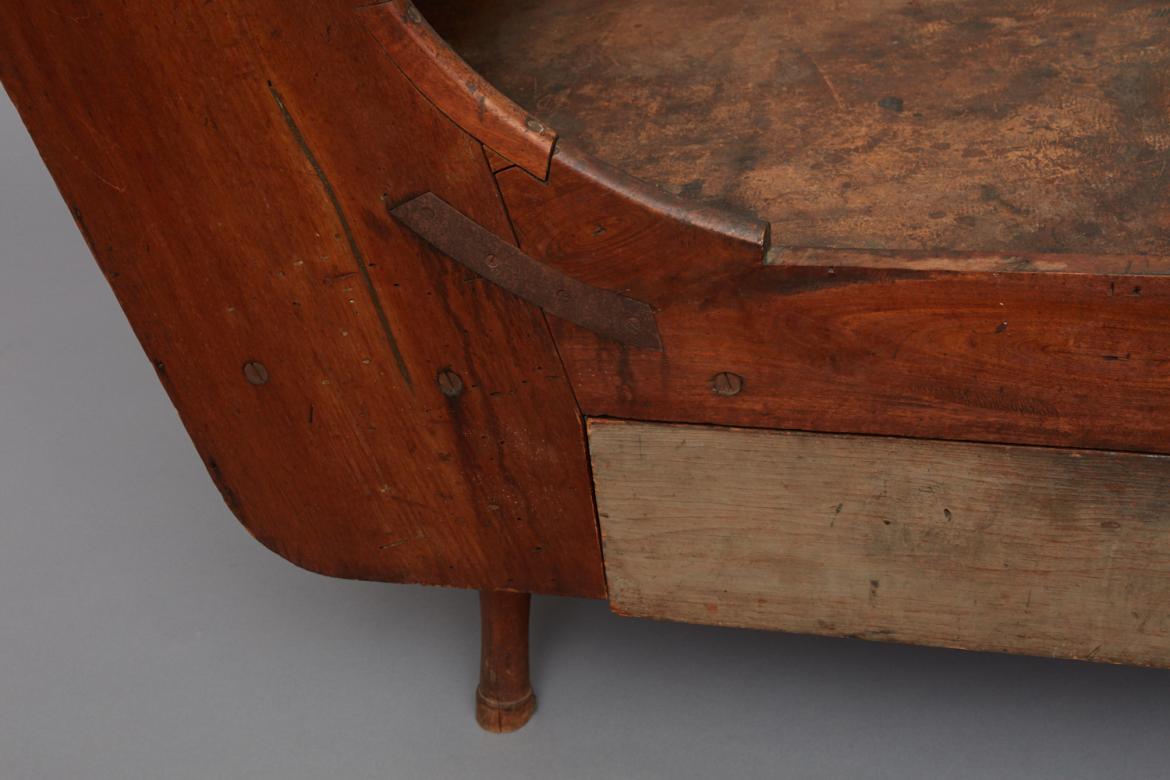 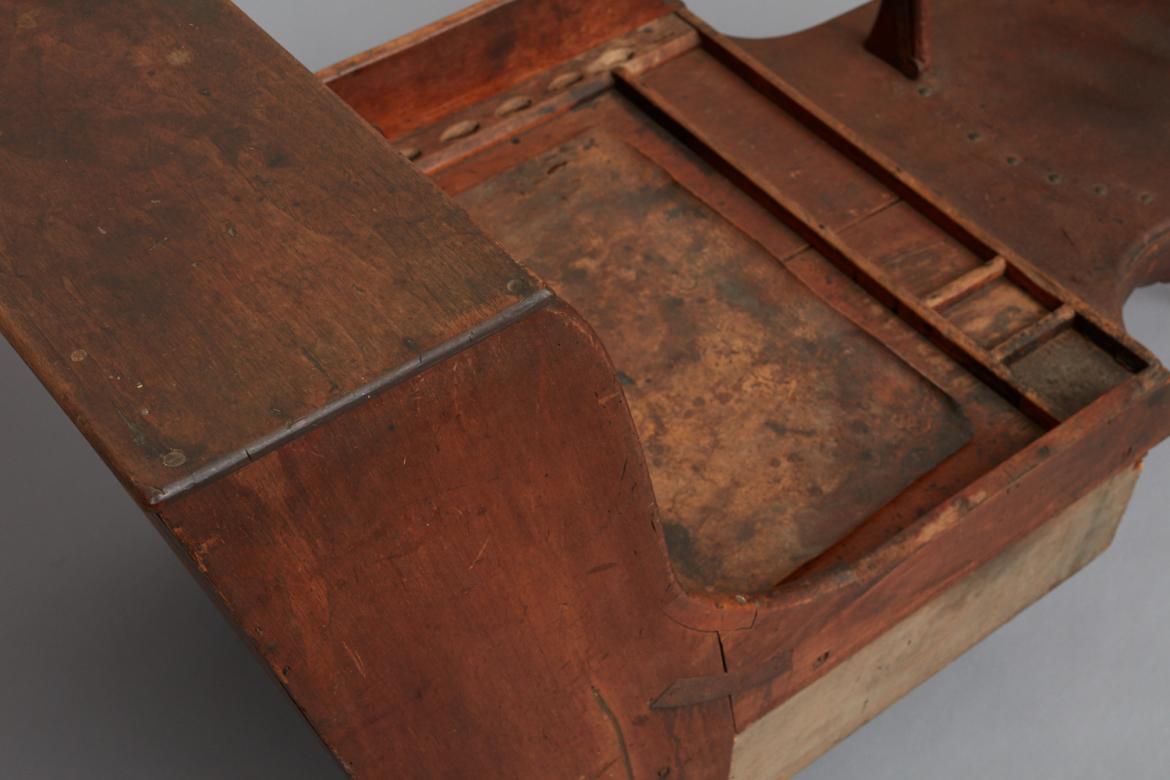 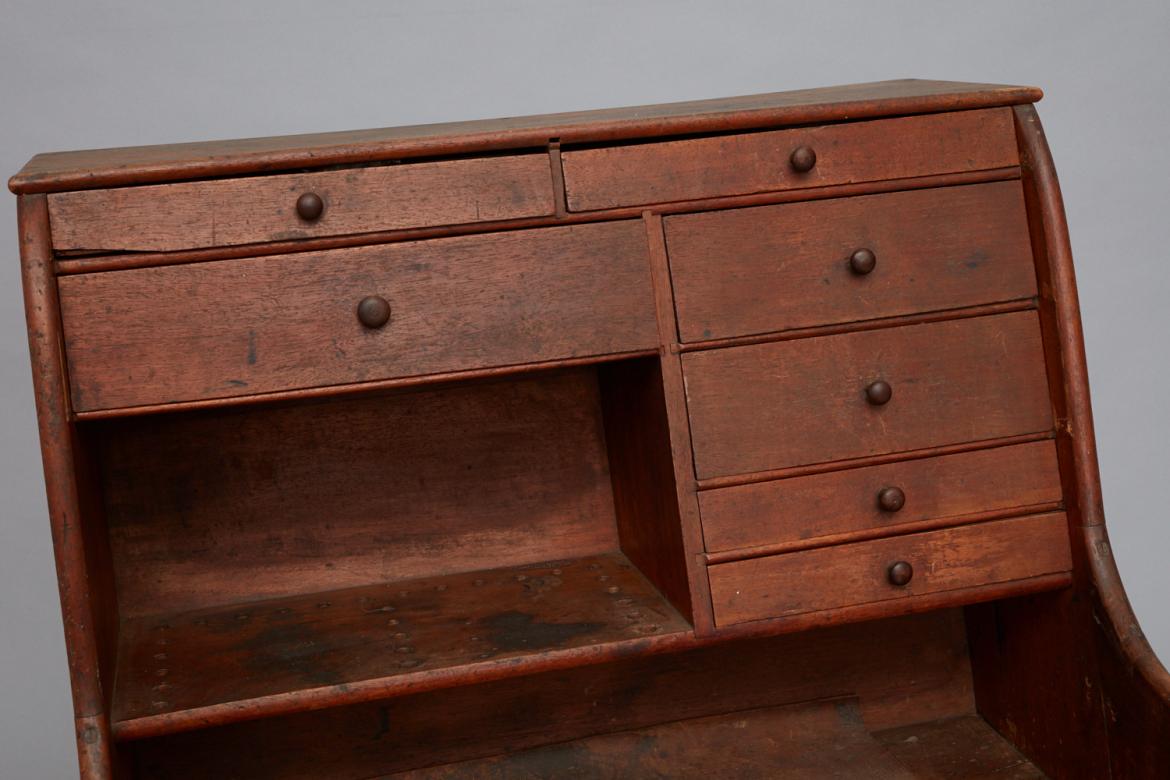 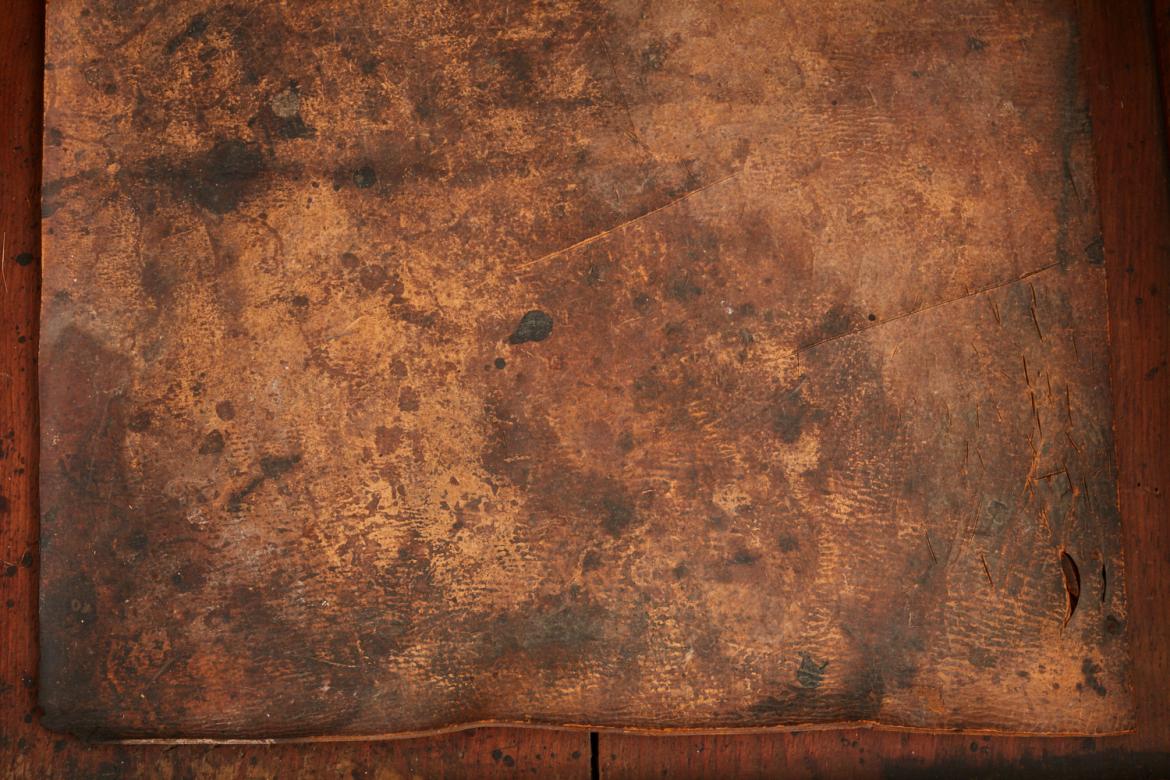 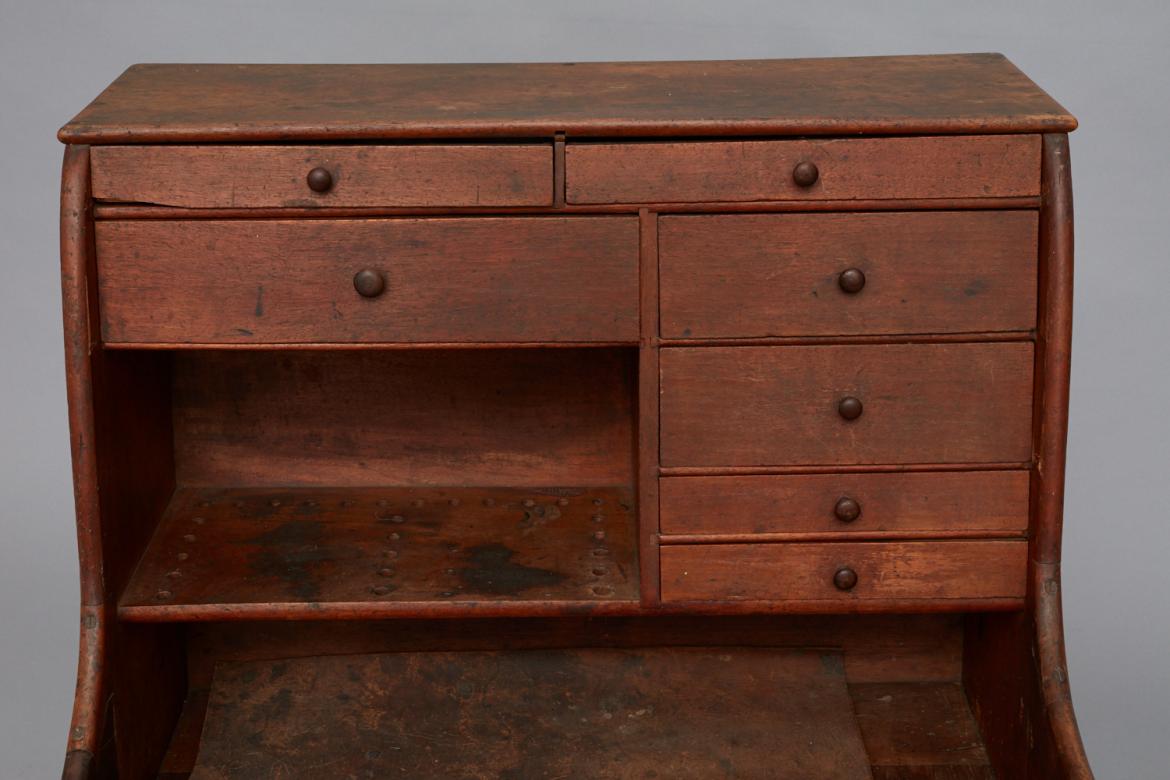 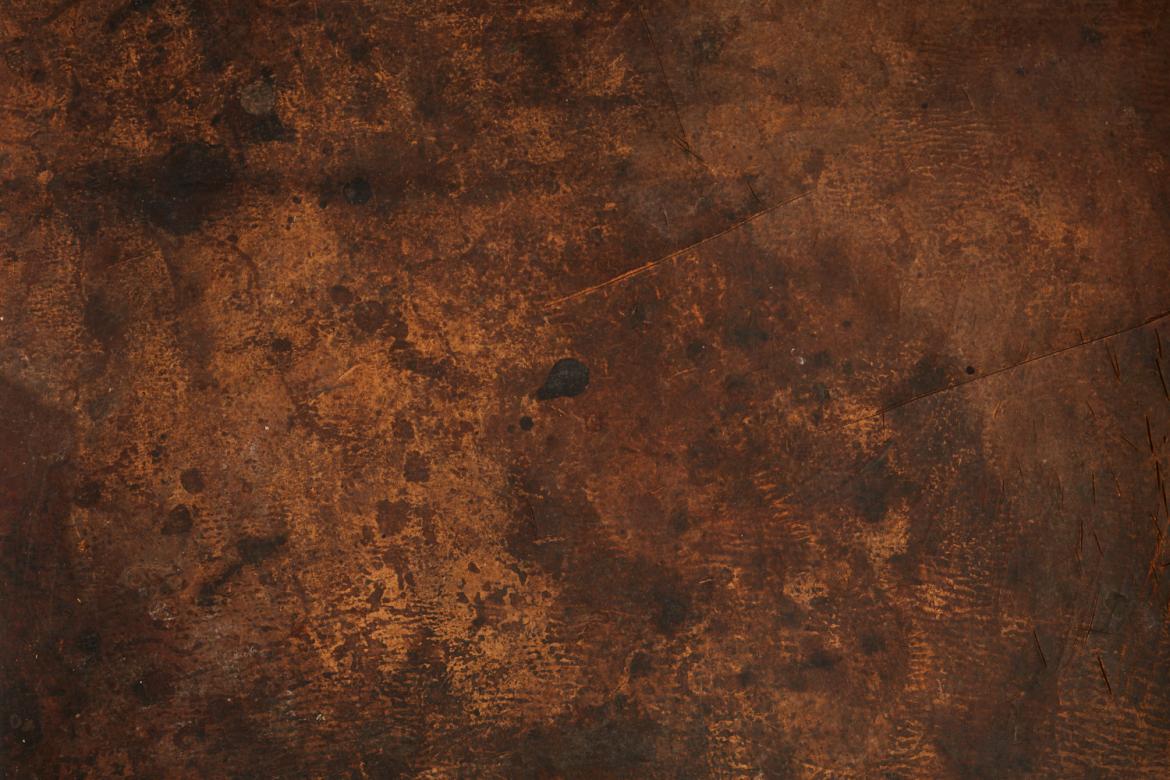 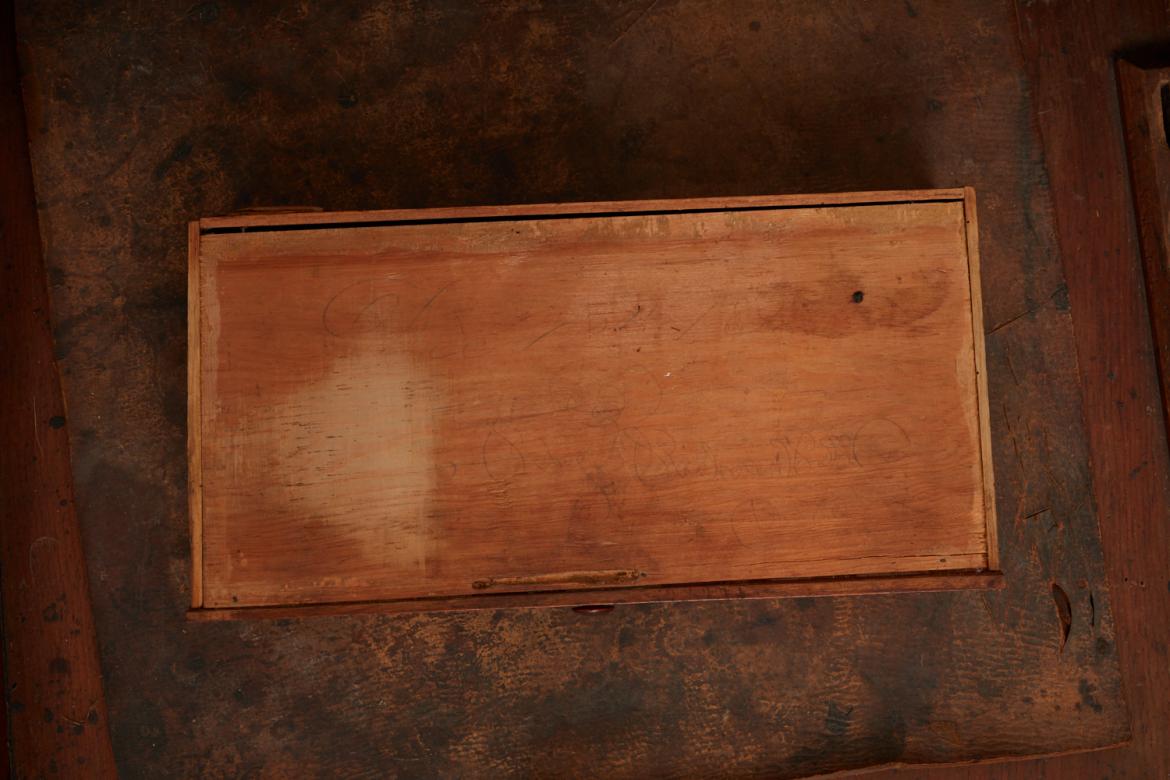 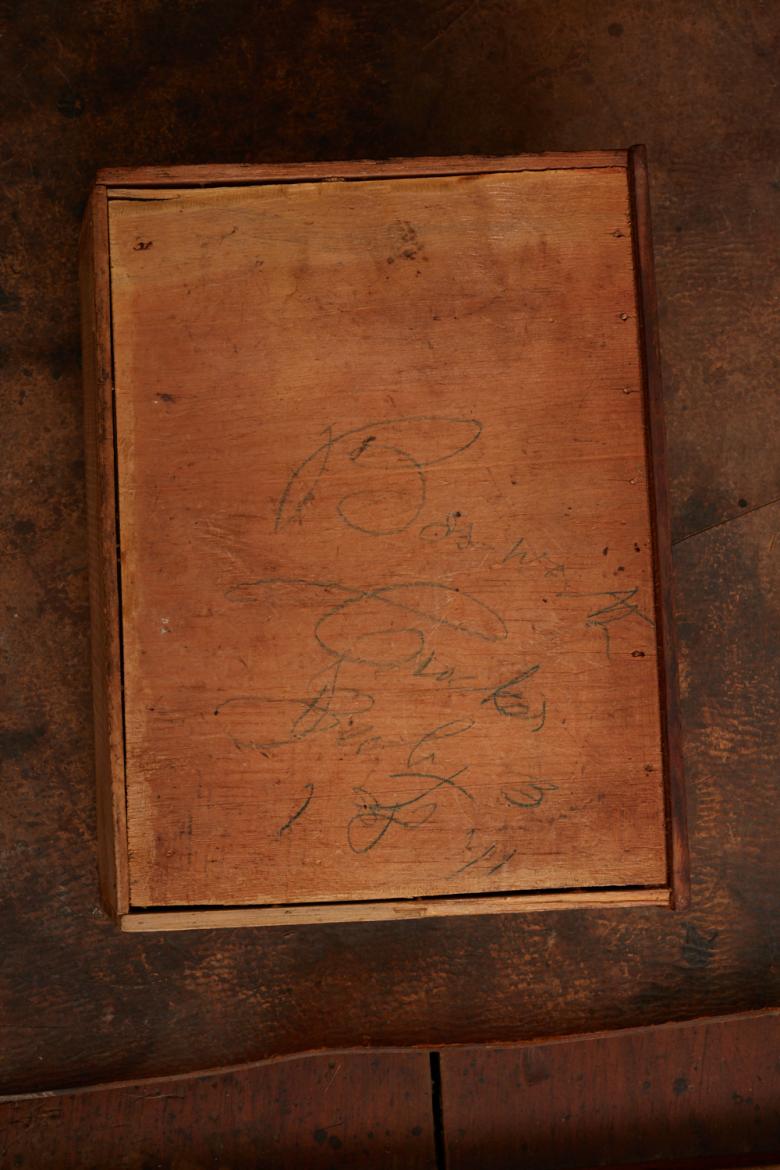 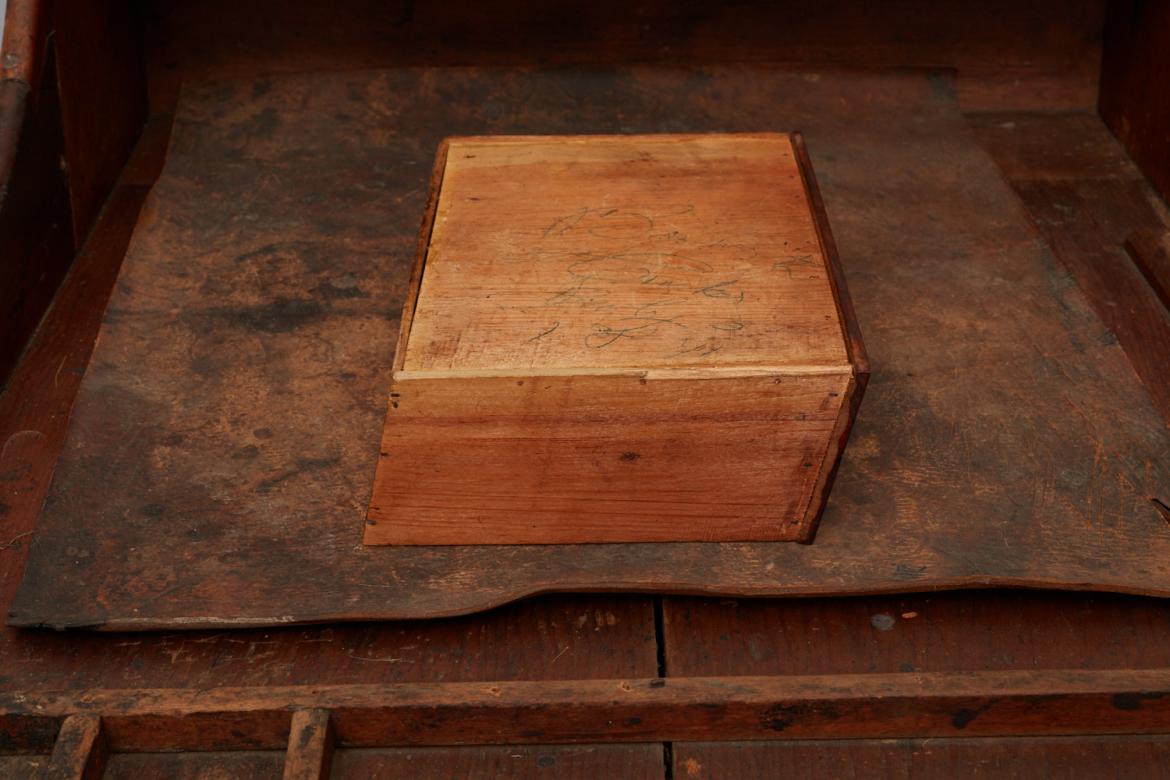 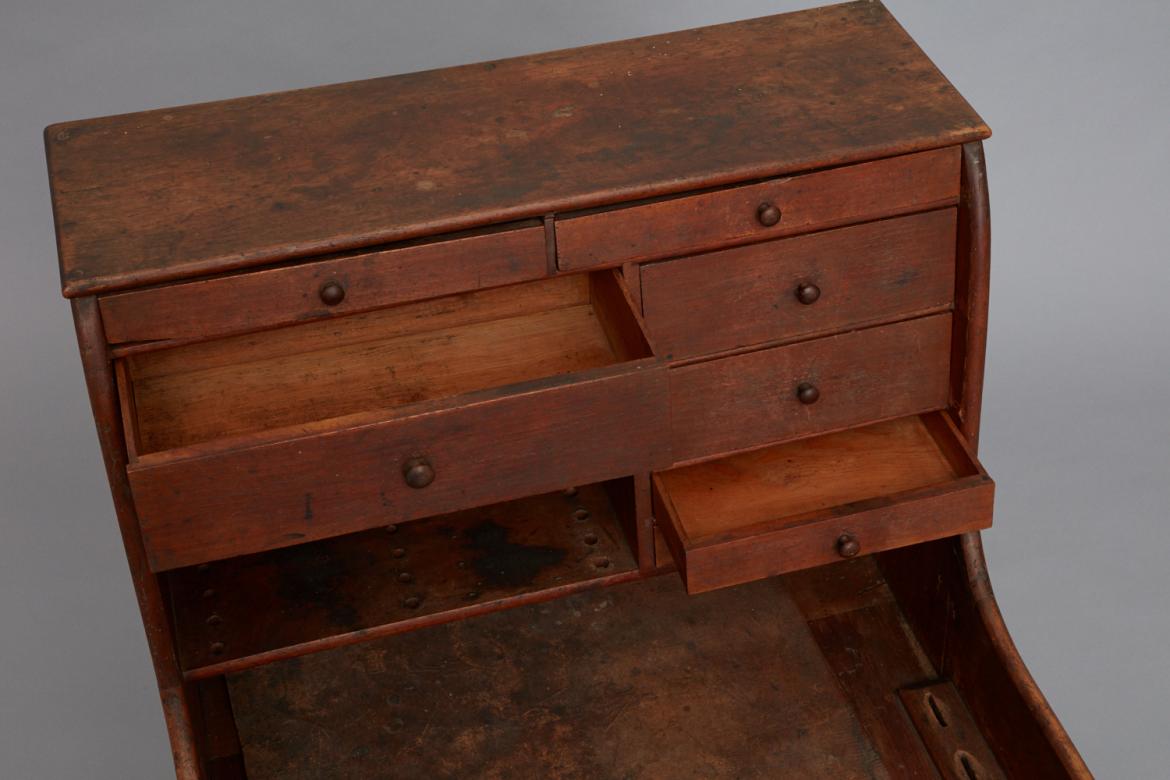 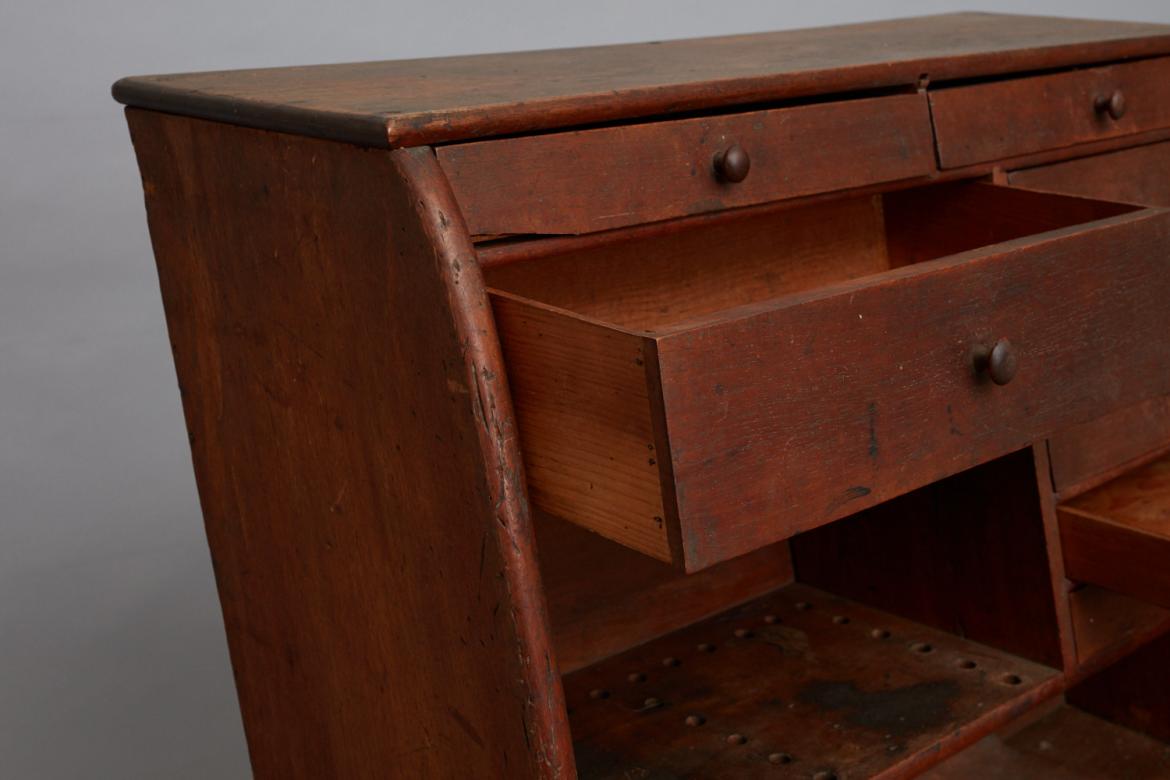 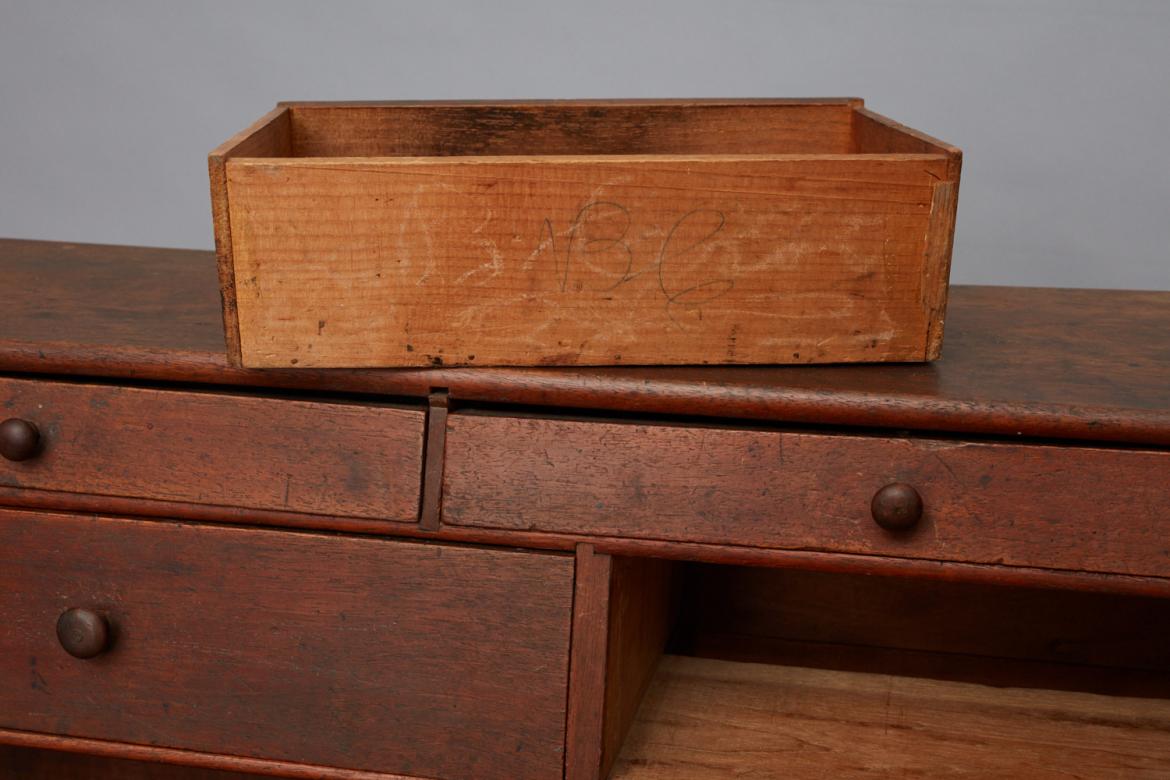 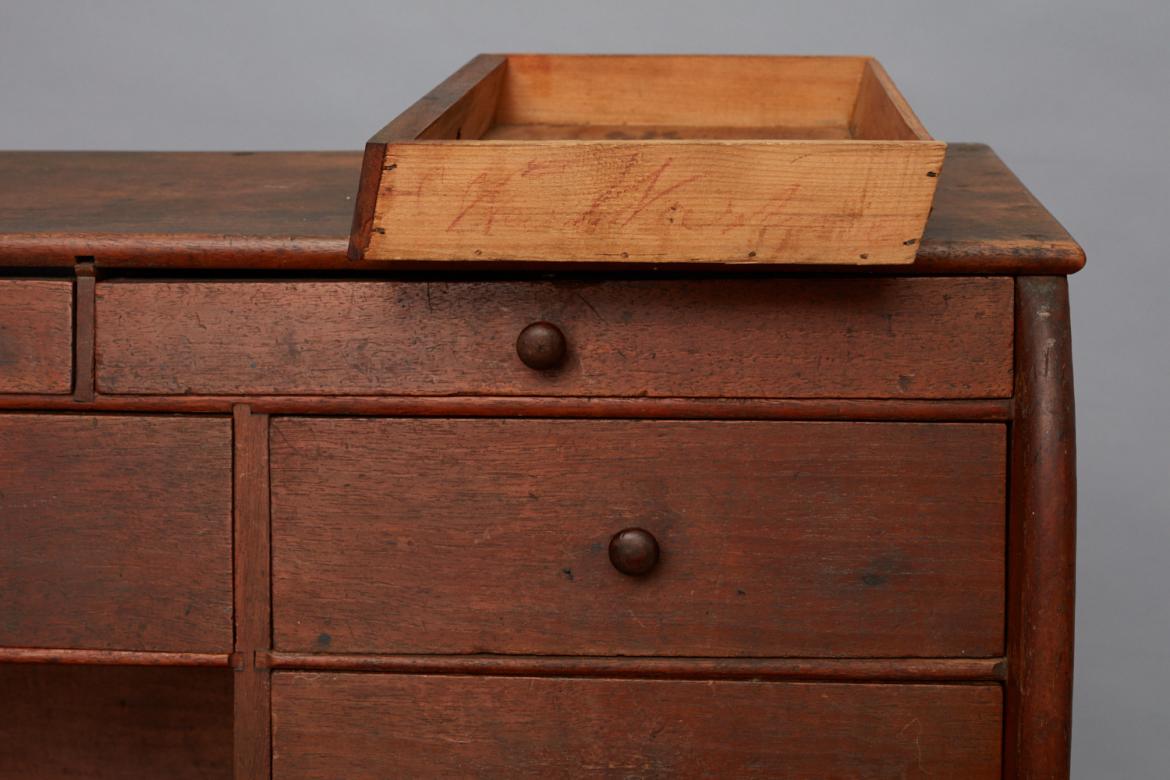 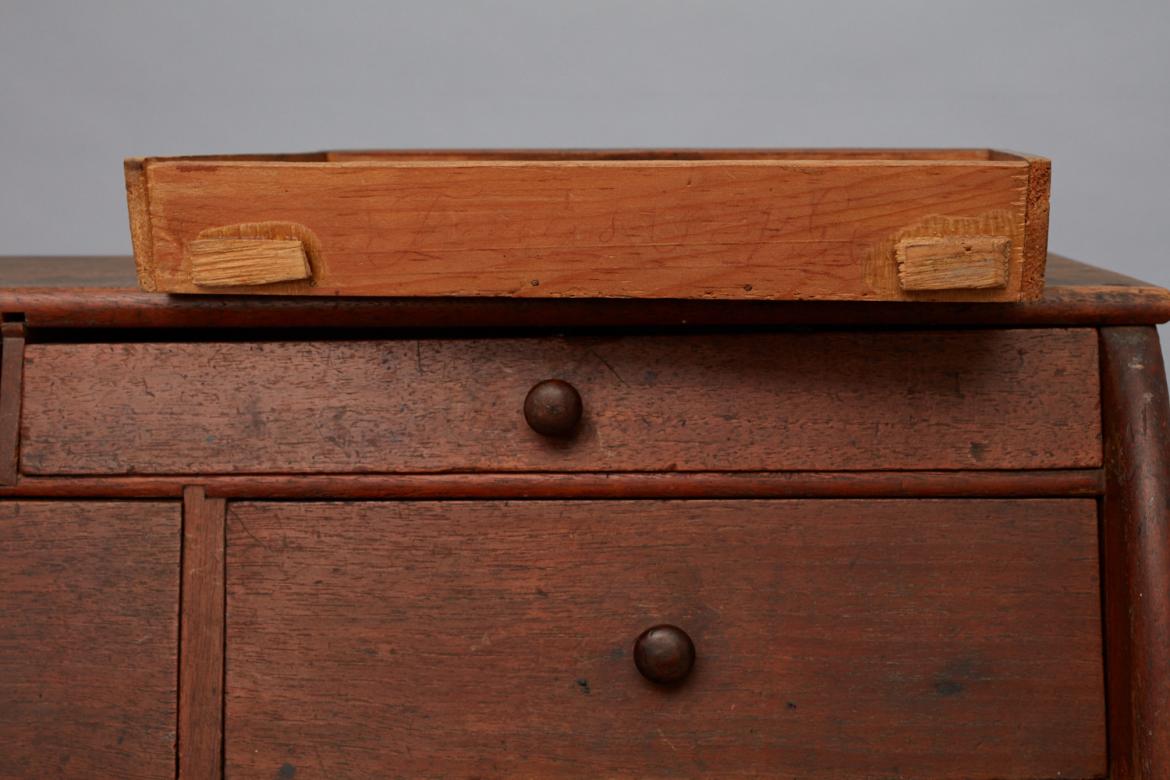 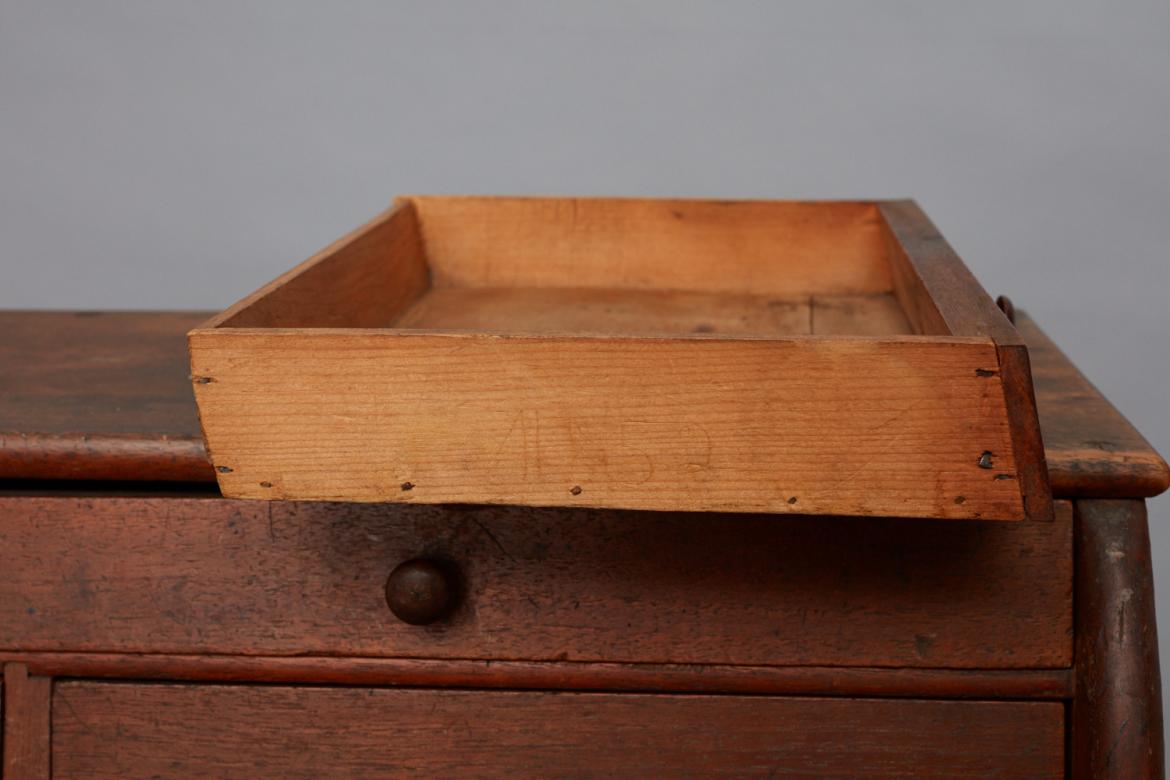 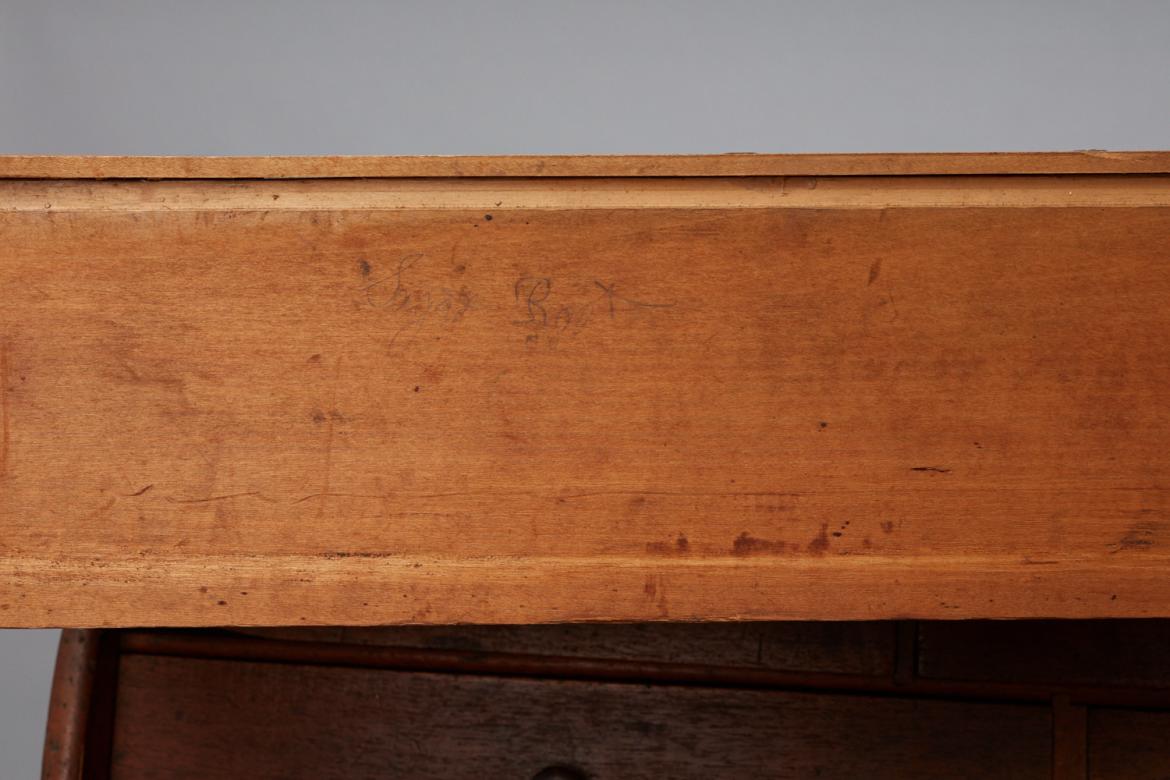 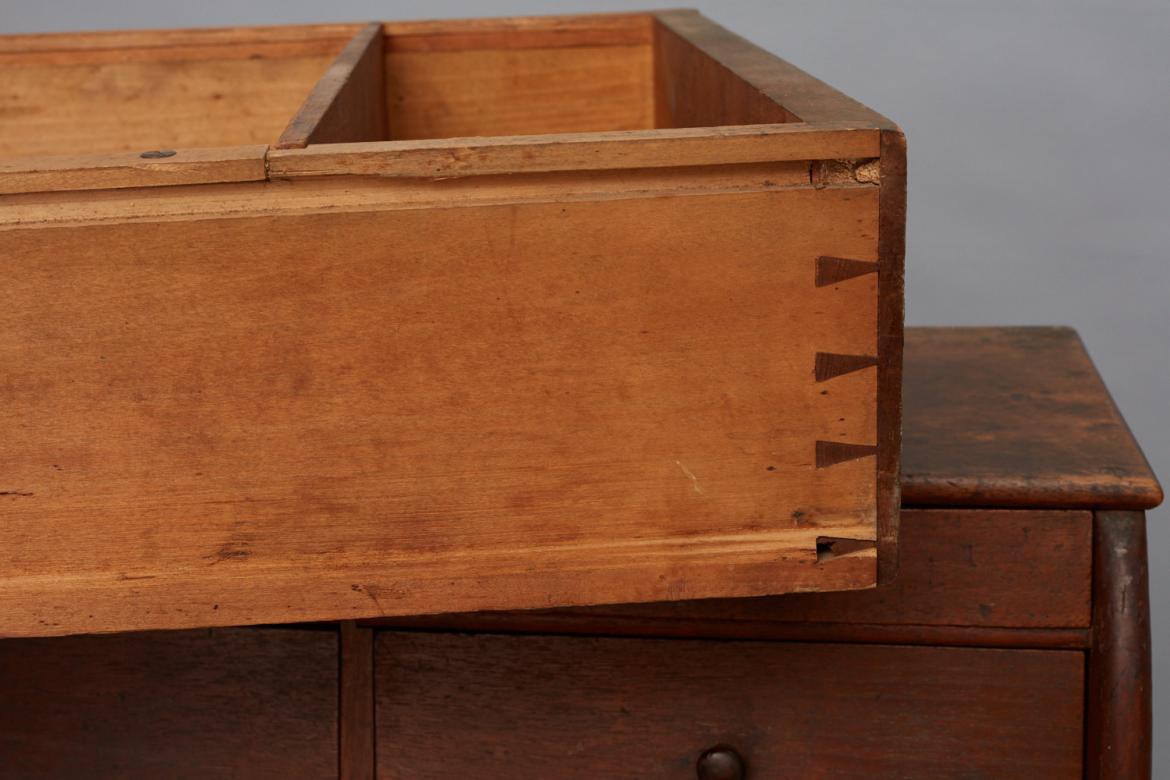 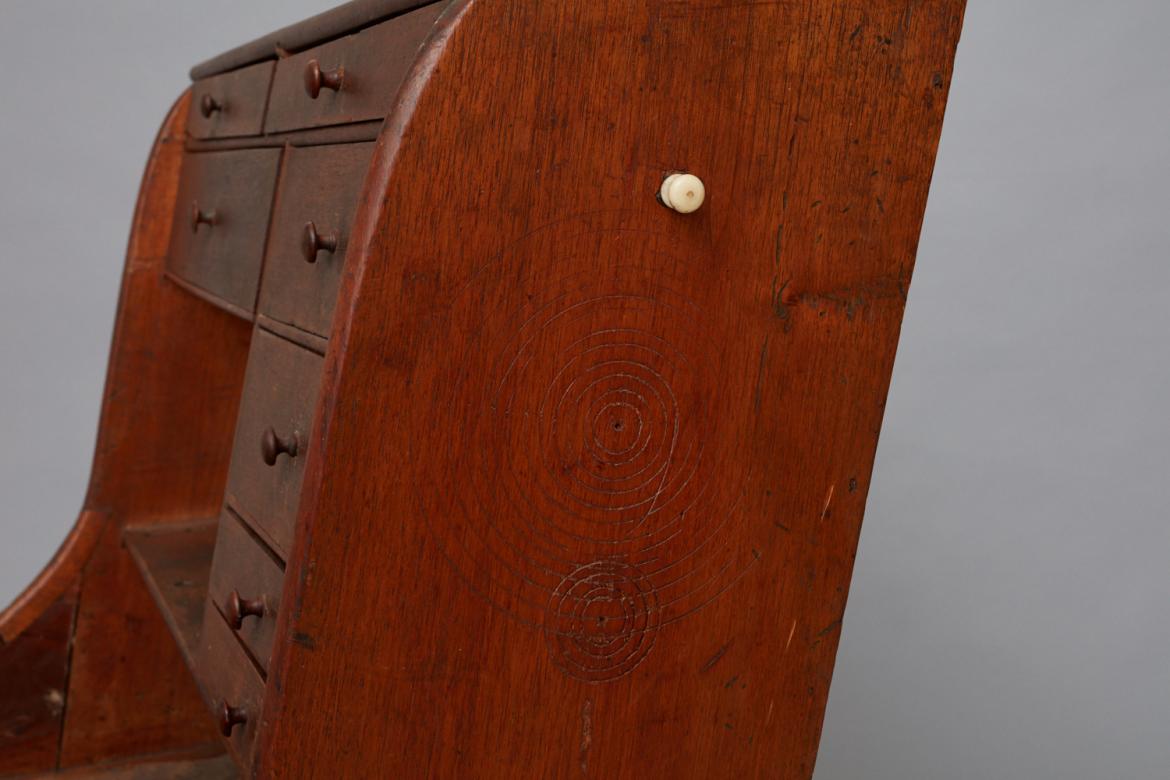 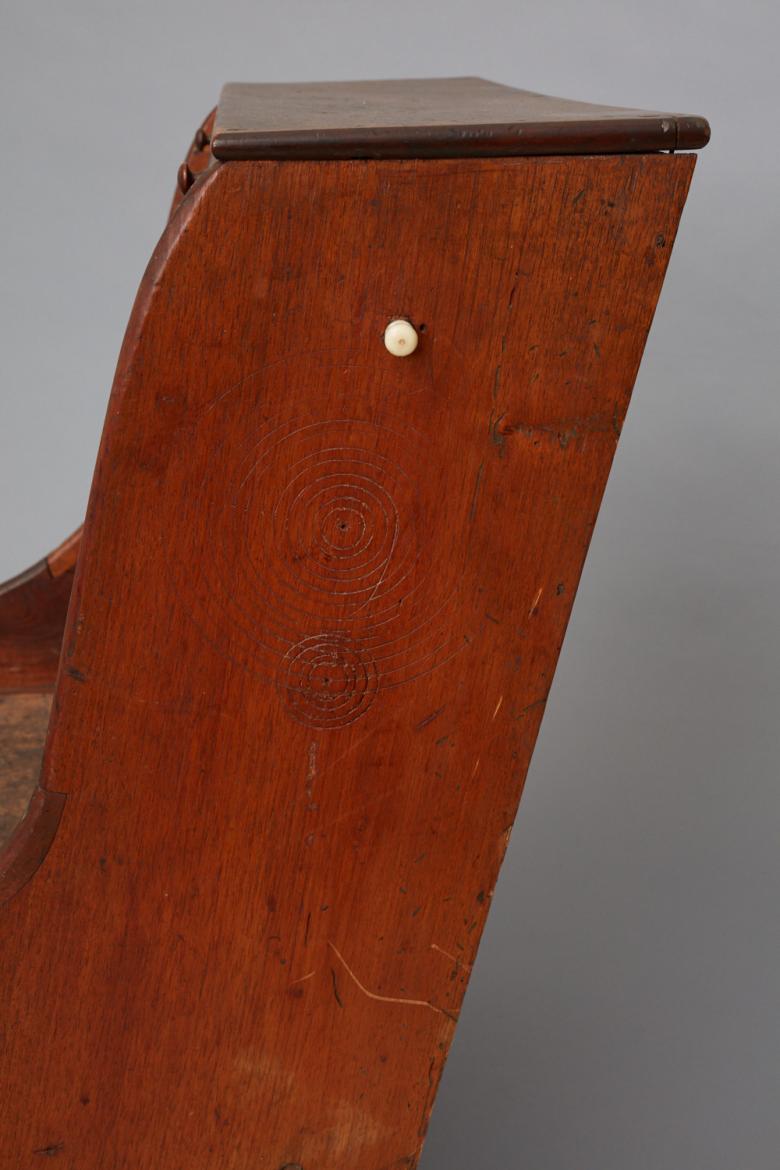 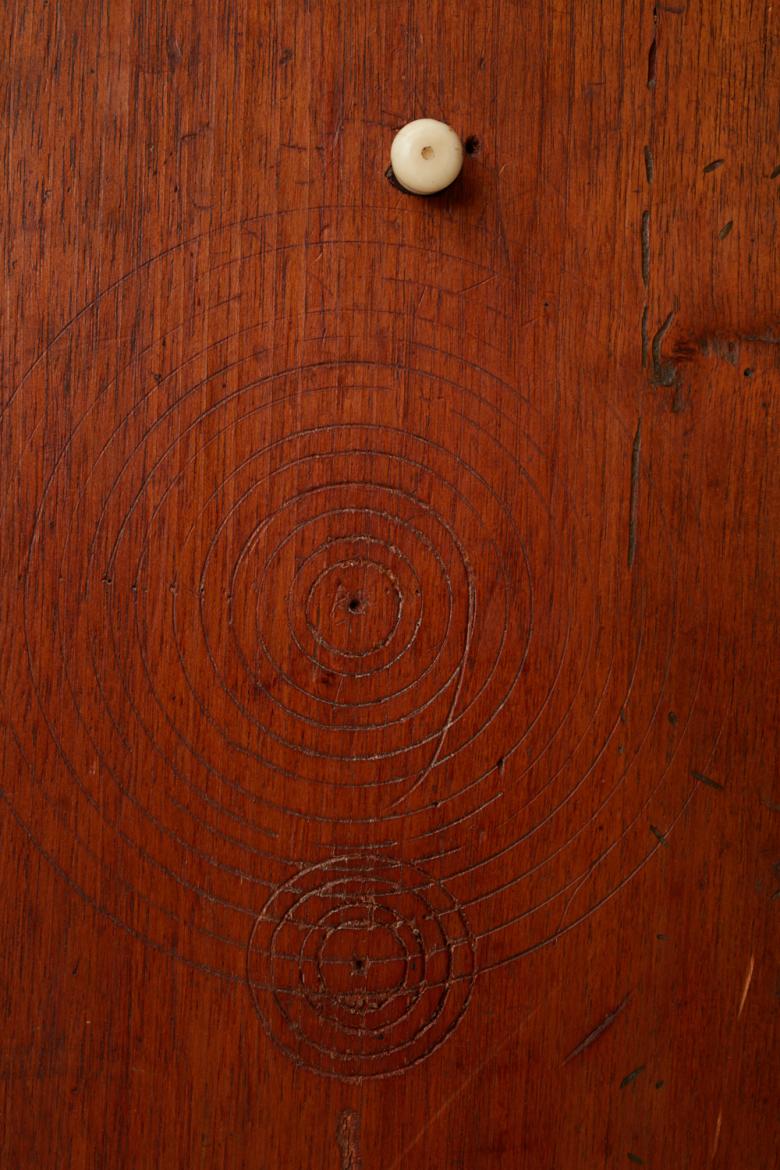 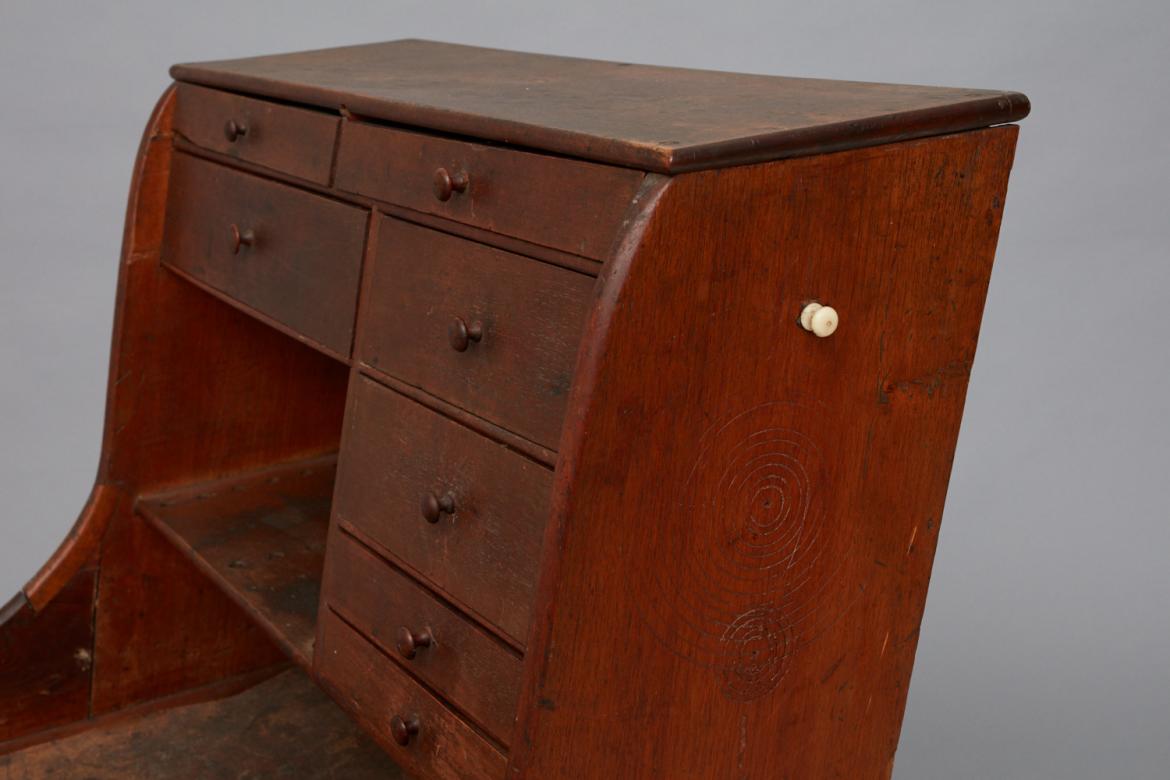 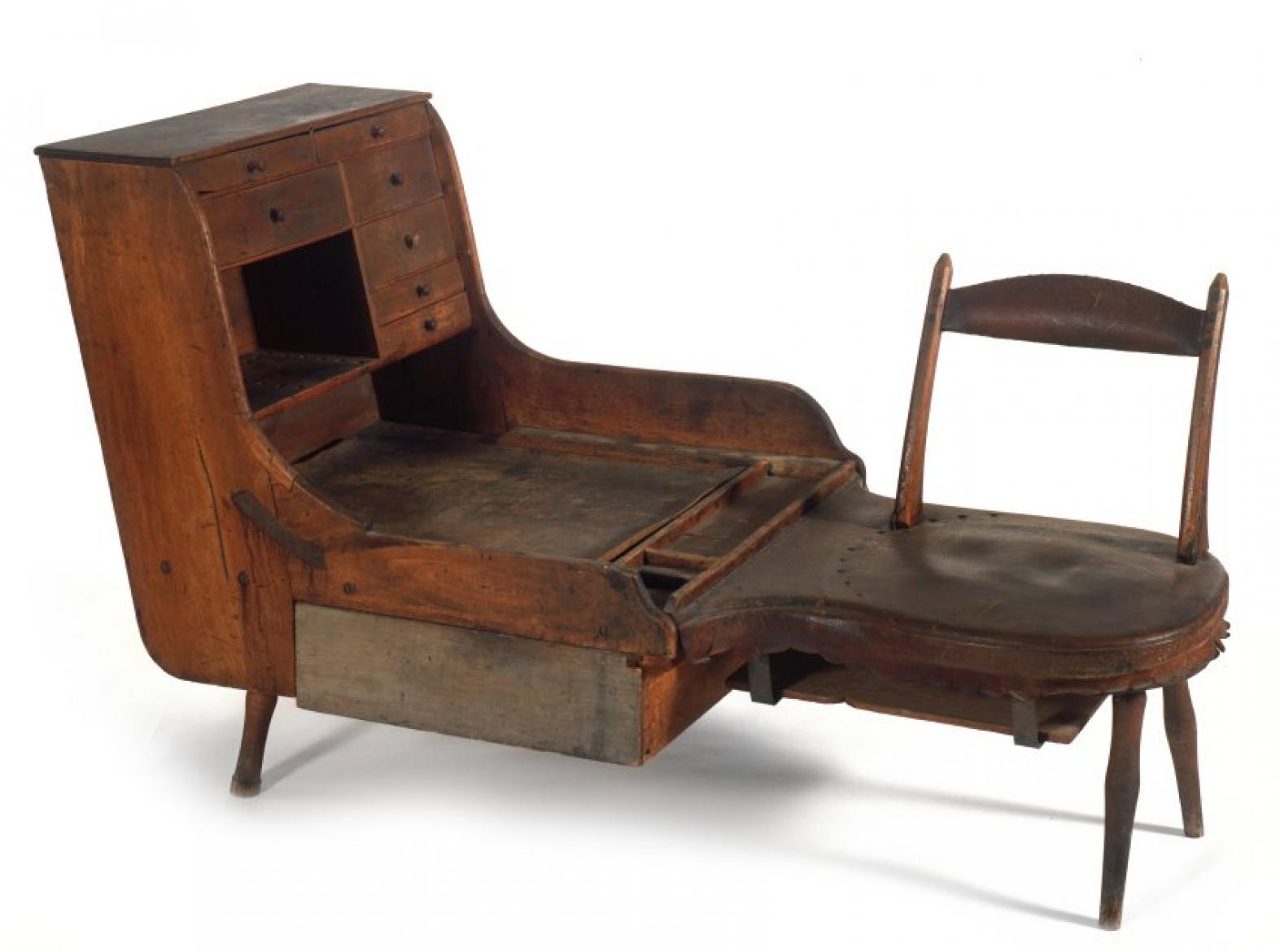 Pine surface with walnut drawer case including the sides, top, back, and drawer fronts. Pine sides, backs, bottoms and runner panels of the seven drawers. Under-slung drawer of pine, dovetailed, possibly a later addition from a recycled piece of wood, since the front is painted. Padded and leather-covered seat and hinged back, with back frame of walnut. Scalloped "drapery" over the edge of the seat; shelf under the seat.

Shoemakers employed a broad range of specialized tools to produce shoes. This bench is designed to provide the shoemaker with both an efficient means to store and organize his tools and a convenient place to work. It typifies shoemakers' benches used throughout the United States in the 19th century. To make a shoe, a Shaker shoemaker would have started with a last, or a hand-carved wooden mold of a foot to be fitted, and sewn the shoe around it. In the process the shoemaker would have used knives to cut the leather or worsted for the uppers and the leather for the soles, awls to punch holes for stitching and laces, jacks and pincers to hold and pull the material tightly, hammers to make the leather pliable and nail the heels, and burnishers to finish the shoes. These tools were stored in the various compartments built into the shoemaker's bench. This bench bears numerous written inscriptions that offer some insight into its history. The inscriptions read: "Dec 1st 18.."; "B Croc"; "BC"; "Bosworth Crocker/ July 3 1841 [or 1871]"; "December 1845"; "1852"; "Finis B.C."; "Dec. 1st 18[--] by Richard B. Wood..."; and other faint inscriptions that have yet to be deciphered. Two children named John Bosworth Crocker and Louisa Maria Crocker were left with the Mount Lebanon Shakers in 1865 and reclaimed by their father in 1874. All of the dates inscribed on the bench are before the birth of John Bosworth Crocker (b. 1853 in England), so it would be logical to conclude that the shoemaker's bench belonged to and was possibly made by his father or another male relative named (Richard) Bosworth Crocker, who donated or sold the bench to the Shakers. However, the bench was most likely made by Richard B. Woodrow (1828-1909), who made several other items in the Shaker Museum's collection, including a pair of worsted combs (#1950.28.1 and 1950.32.1).