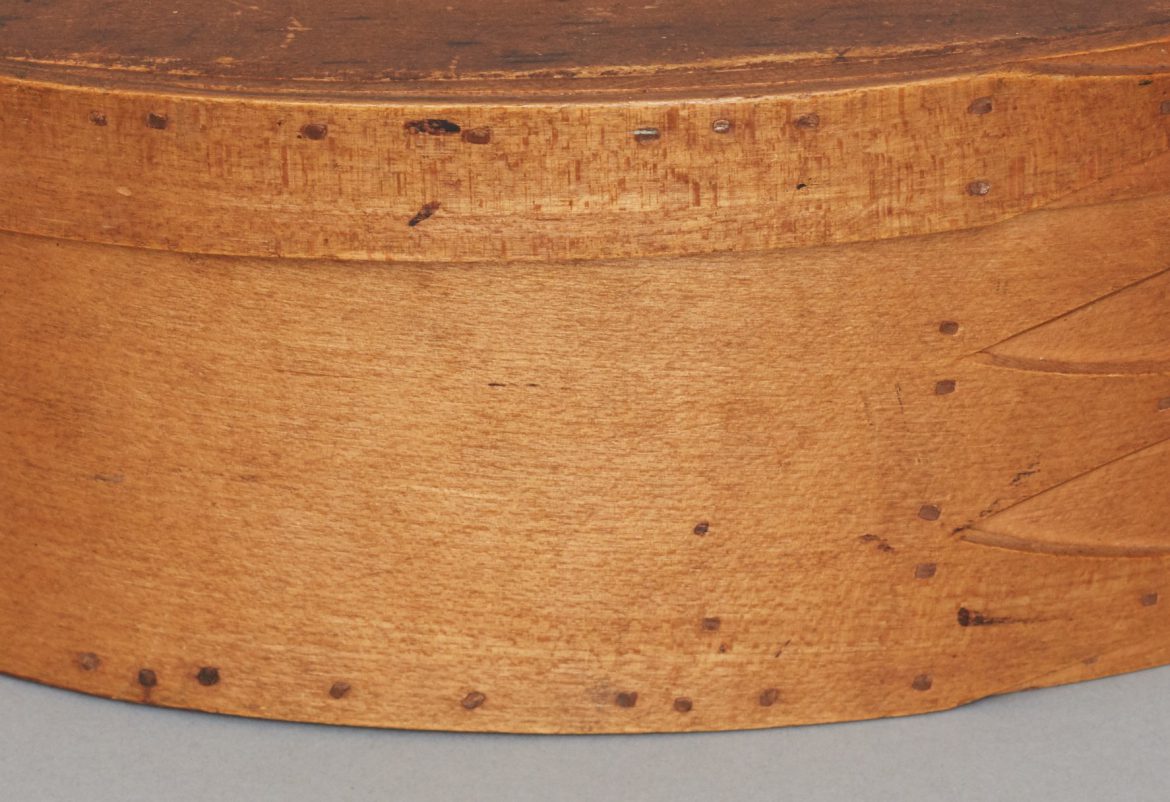 The earliest oval boxes: A conundrum

The simple oval-shaped bentwood box ranks high on the list of iconic objects associated with the Shakers. These boxes are pleasing to the eye and the hand. They are often colorful, painted in reds, oranges, greens, blues, browns, and yellows. They were typically made in more than a dozen different sizes ranging from around two inches long to […]

The simple oval-shaped bentwood box ranks high on the list of iconic objects associated with the Shakers. These boxes are pleasing to the eye and the hand. They are often colorful, painted in reds, oranges, greens, blues, browns, and yellows. They were typically made in more than a dozen different sizes ranging from around two inches long to well over a foot, and many of them were made to nest one inside the other. In addition to their varied physical attributes, these boxes served a variety of uses: in the kitchen and pantry they held salt, flour, baking soda, sugar, herbs, and spices; in the sisters’ workrooms they held sewing notions; and in the brothers’ workrooms they held tacks, nails, screws, dry paint pigments, and on and on. Many of the oval boxes used by the Shakers are inscribed with the names of those users as well as names of the makers, dates, and descriptions of how they were used. All of these attributes make these boxes particularly interesting to collectors and particularly useful to the Shaker Museum in telling Shaker stories.

Craftsmen in any Shaker community may have made boxes for use in their community, but not every Shaker community had an industry that produced boxes for sale to the outside world. The Shakers at Mount Lebanon, Canterbury, Sabbathday Lake, Alfred, and Union Village did, at various times, produce boxes in quantities great enough to make notable sales to the outside world. Around 1850, Brother Isaac Newton Youngs at Mount Lebanon collected information on some of the industries at Mount Lebanon – including the oval box industry. He noted that at Mount Lebanon, boxes were first made for sale at the Church Family around 1799, making this one of the earliest Shaker businesses. This continued until after the Civil War when the business was moved to the Second Family. There it was carried out with varying success into the 1930s. Between 1822 and 1865 over 77,000 boxes were made at the Church Family. Much fewer were made at Mount Lebanon after 1865. Other communities with box industries did so in a manner close to what had been established at Mount Lebanon, but none of them matched the quantity of boxes made. Brother Delmer Wilson at Sabbathday Lake continued making boxes into the 1950s and some boxes were made by Shakers at Sabbathday Lake in this century.

While oval boxes may seem complex their manufacture is pretty straightforward. Shakers called the bent parts of the box the rims. The flat boards fit into the rims were called the heading. The narrow arch-shaped overlapping ends of the rims were called swallowtails (often just called “fingers”). Box rims were bent to shape using steam and a shaping form. They were tacked through the swallowtails to keep them bent in an oval shape. To do this copper tacks were driven through the swallowtails to secure the rims. When dry, the heading was cut to fit into the rims and secured with points – small copper, iron, or wooden wedges driven through the rim into the edge of the heading. No glue was used to secure the parts together. Most of the thousands of boxes the Shaker made followed this formula. Though the shape of the swallowtails and the pattern the craftsman chose for nailing them to the rims may differ, the choice of copper, wood, or iron points may be determined by available materials, and the skill with which the boxes were finished may vary widely, the construction of these boxes is predictable.

There are a small number of oval boxes that have been attributed to the Shakers by their general appearance that diverge in several ways from the standard boxes described above. They are sometimes called “tucked-finger” boxes for a reason that will soon be apparent. Shaker Museum | Mount Lebanon has five examples of these boxes in its collection; they have several distinctive characteristics that easily identify them:

Several of these divergences in construction and materials from the common boxes made by the Shakers suggest that these boxes were made quite early – the use of tight-grained pine and the frugal use of copper tacks may indicate the boxes were made at a time when old-growth pine was still standing on Shaker land and when the making of copper tacks was a laborious and expensive process. The extra effort of inserting the ends of the swallowtails into the box rims suggests that the makers did not fully understand that this was unnecessary to make the boxes structurally sound. All of this, plus the general scarcity of these boxes, points to the possibility that these boxes were the earliest products of the Shakers’ oval box makers – the prototypes of what would become the iconic Shaker oval box.

A problem with these observations emerges with the realization that none of these boxes, to date, has a solid provenance connecting it directly to the Shakers. This, then, is the challenge: to try to establish a clear connection between extant examples of these boxes and the Shakers. Four of the five boxes in the Museum’s collection were collected in New York State in the general vicinity of Watervliet and Mount Lebanon but not directly from the Shakers.

As always, we appreciate observations and comments that might help with a better understanding of the origin of these boxes.

3 responses to “The earliest oval boxes: A conundrum”