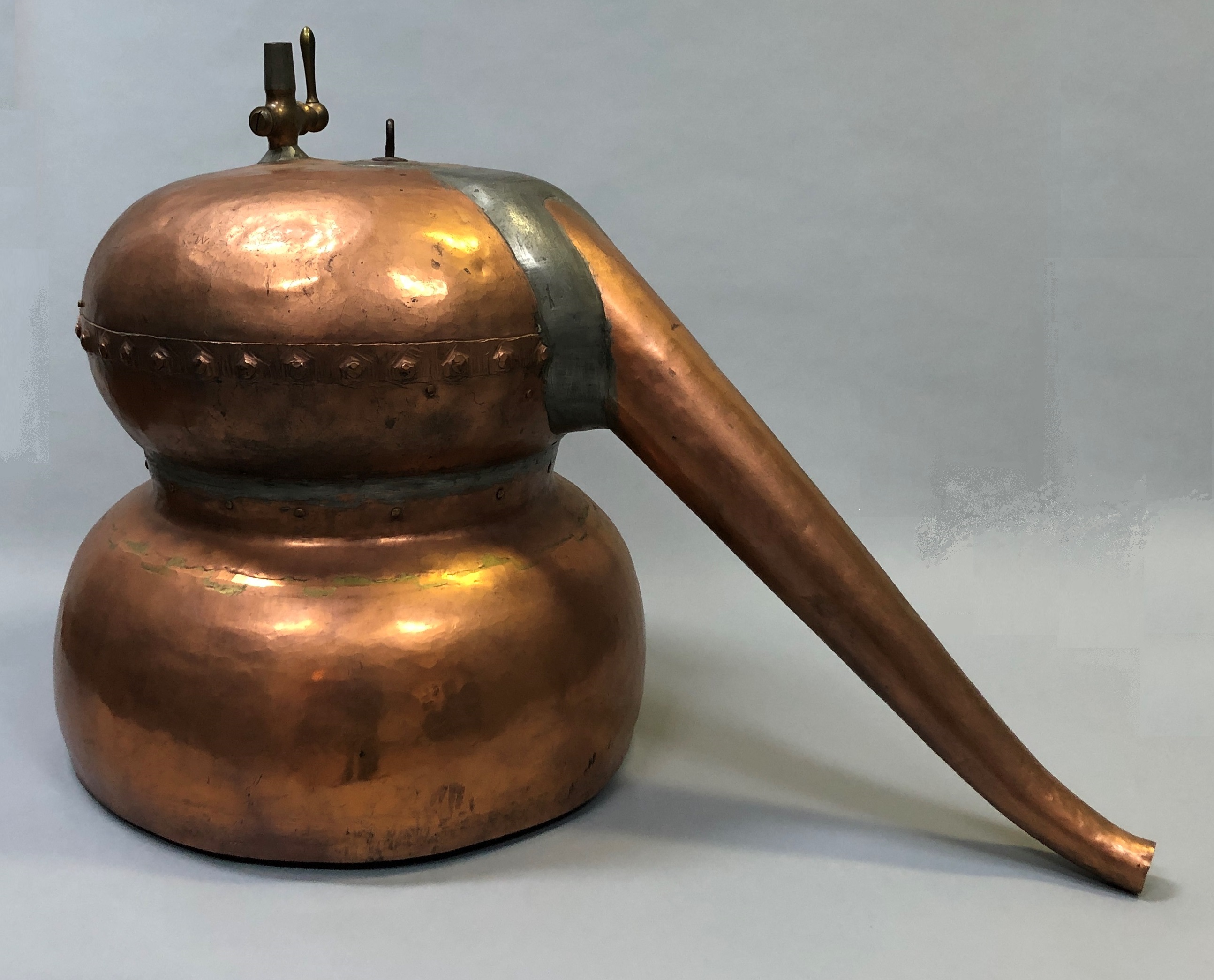 Shaker Museum’s neighbors on Shaker Museum Road in Old Chatham, NY, are establishing a rye whiskey distillery on the land and in buildings that once belonged to the museum’s founder John S. Williams, Sr. They are raising their own rye and will be distilling the mash, and aging and bottling the whiskey, on their property. […]

Shaker Museum’s neighbors on Shaker Museum Road in Old Chatham, NY, are establishing a rye whiskey distillery on the land and in buildings that once belonged to the museum’s founder John S. Williams, Sr. They are raising their own rye and will be distilling the mash, and aging and bottling the whiskey, on their property. The owner and his advisor on all things still- and whiskey-related recently stopped by to see a still in the museum’s collection.

The still, or properly the copper still head, was acquired from the Shaker community at Canterbury, New Hampshire, in the early 1950s along with a copper pot that may or may not have originally been used with it. The two do not easily fit together, but there may have been an additional piece, now missing, that would have united them. Whatever the original configuration, it is the still head, by its form and function, that held our interest during the examination. It’s made of hammered copper and the various curved pieces are joined together with wide dovetail joints that have been secured by brazing. A long tube is joined to the body with an ample supply of lead. The inside of the still has a “gutter” around its interior circumference, just above the lower point at which the tube joins the body. The interior of the still head has been coated with tin, as is common with copper cookware. (When copper comes into contact with acidic material, it will leach toxic chemicals into what is being prepared in it.) An iron ring is secured through the center of the top of the still head, likely used with a hoisting mechanism to lift the head off the pot, and a brass valve is mounted on the top that could have been used to relieve pressure. 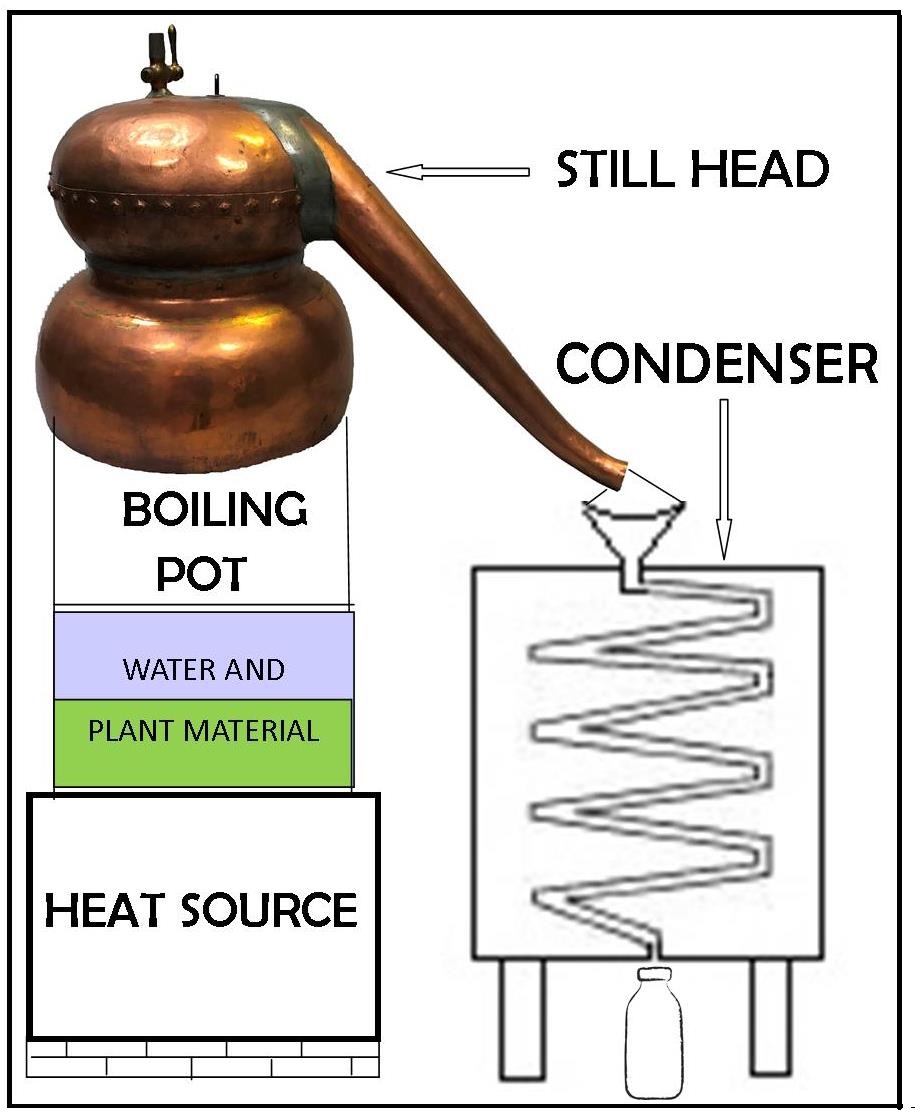 Schematic Drawing of a Still.

Stills have been in use for several millennia and the basic design of a simple alembic has not changed much over time. The date of the still head in the museum’s collection date has not been determined. It is very similar to the one that George Washington used in his whiskey distillery at Mount Vernon and equally similar to ones being made today. Functionally, the plant material to be distilled is placed in a pot and covered with water. A heat source below the pot is used to bring the liquid to a boil and steam coming from the boiling liquid rises up into the still head, carrying with it essential oils and other water-soluble parts of the plant. When the steaming vapor comes into contact with the top of the still head, some of it condenses and runs down the sides into the gutter and is carried it to the tube. The steam that does not condense in the still head and the condensed liquid run down the tube into some kind of condensing apparatus – often a coiled copper tube jacketed in cold water – where the remaining steam is changed back into a liquid. The liquid, if not originating from a fermented material, is called a hydrosol. Fermented sources produce an alcohol called by a variety of names depending on the nature of the fermented material. 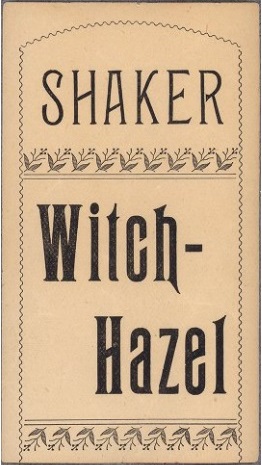 While the Canterbury Shakers may have used their still to distill alcohol either for consumption or medicinal purposes, it is likely that the primary use of this still was making various hydrosols – rose, peach, and mint waters. Probably the most common distilled product, however, both for sale and for home use, was witch hazel. A recipe book in the museum’s collection [[Recipe Book], Church Family, Canterbury, NH, ca. 1880-1900. Shaker Museum: 1963. 13084.1.], likely kept by a Shaker sister in charge of the distilling operation in the late 19th century, provides some insight to the Canterbury still. In discussing the distillation of wintergreen, the writer mentions that the still will hold one and a half hogsheads of liquid – about 100 gallons – and that the distilling process could be finished in about five hours. There was no comment about the output of mint water. With the type of still in the museum’s collection, a full batch was started and finished without adding additional liquid or plant matter. It was then emptied and cleaned prior to the next batch. Witch hazel (Hamamelis Virginica), according to a Canterbury Shaker catalog, Shaker Medicines, Shaker Knit Goods and religious Publications, notes that “Shaker Hamamelis, or (Witch Hazel.) A very useful remedy for Cuts, Burns, Scalds, Headache, Sore Throat and all cases of external inflammation: also take internally for Bowel Complaints, Bleeding if the Lungs or Bowels and for aches and pains.” The Canterbury Shakers apparently began selling witch hazel early in their medicinal business. In 1853 they issued a broadside “Wanted” notice saying that “The following Roots and Herbs are wanted, delivered at Shaker Village, Merrimac Co., N. H. for which a fair compensation will be given, if the following directions are observed.” The directions included when to gather the materials and how to clean and dry them. Witch hazel leaves, along with several other distillable plants, were included. The recipe book gives an accounting of the quantity of Hamamelis prepared for sale and home use between 1881 and 1890. It records that the smallest quantity, 22 gallons, was made for sale in 1882, and the largest, 697 gallons, in 1889. The accounting ends with two comments. First, that one quart of alcohol was to be added to each gallon of distilled witch hazel, and second, that in 1893, “This business is transferred to the brethren.” 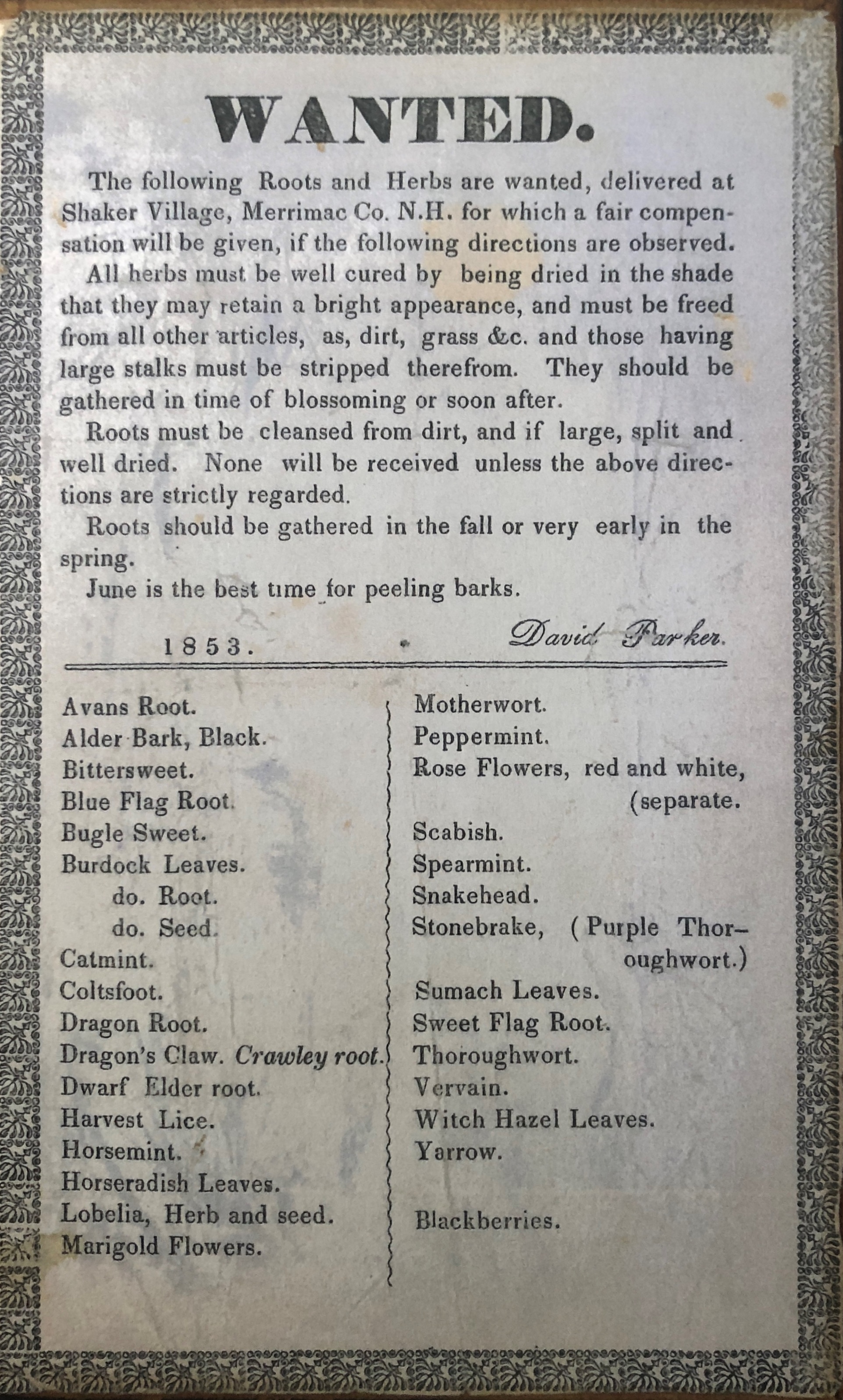 New stills will soon be installed and activated at our neighbor’s business and will operate in a manner similar to the one in the museum’s collection. We look forward to seeing the operation in action and gaining a better understanding of the process.

One response to “A Shaker still”