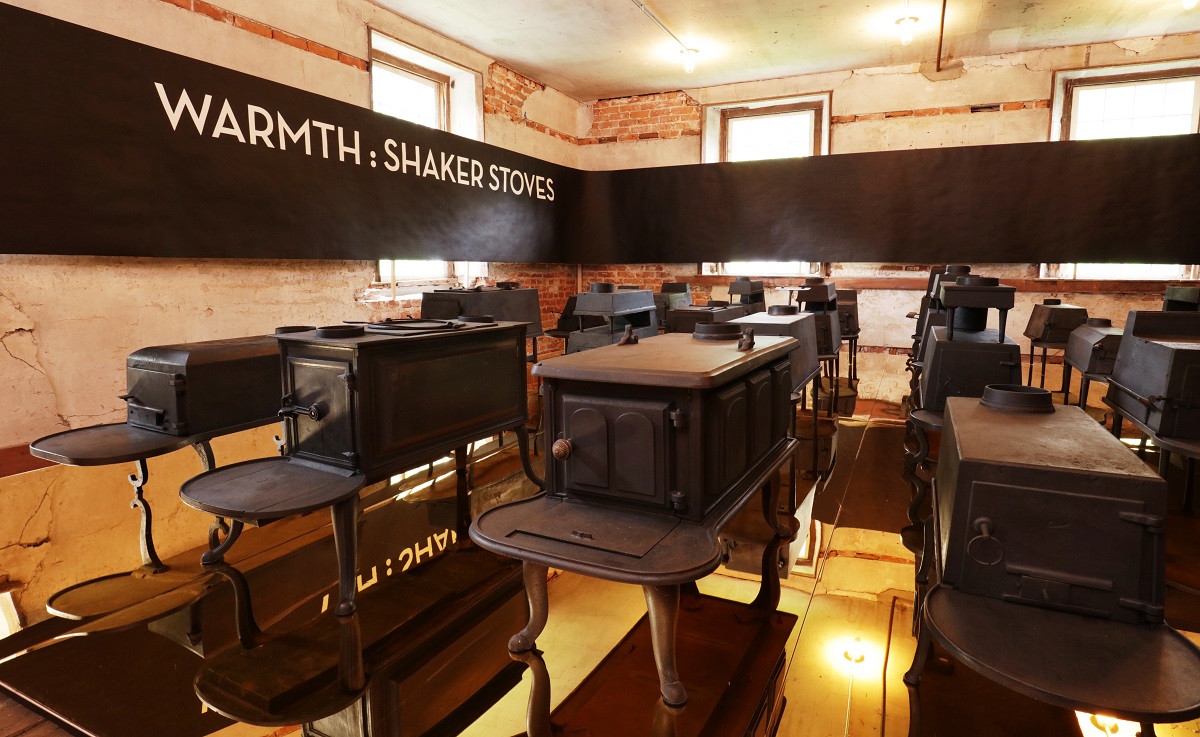 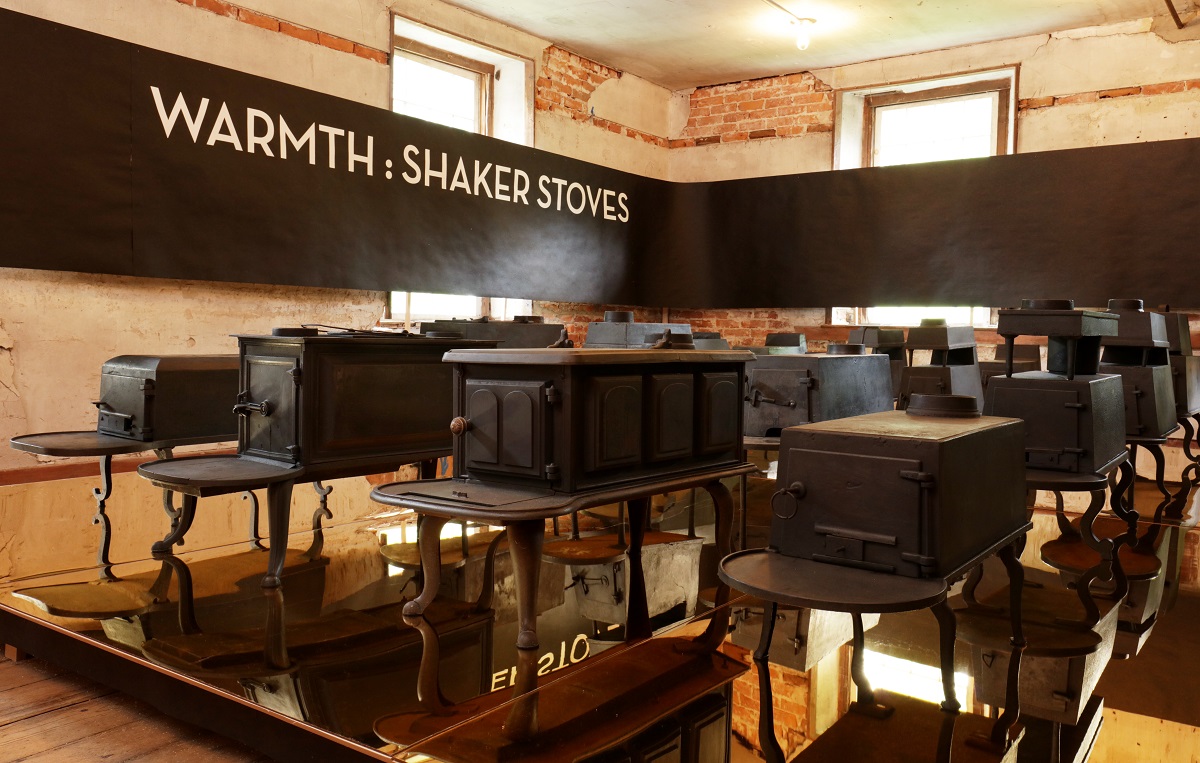 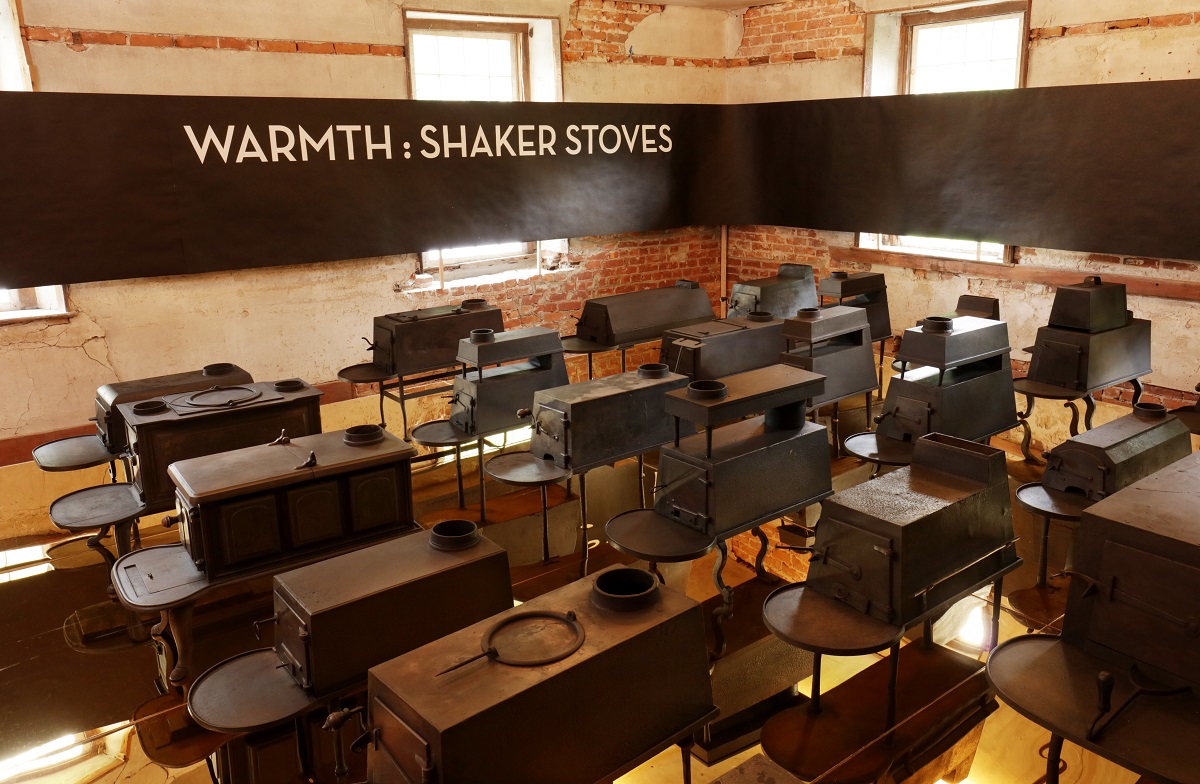 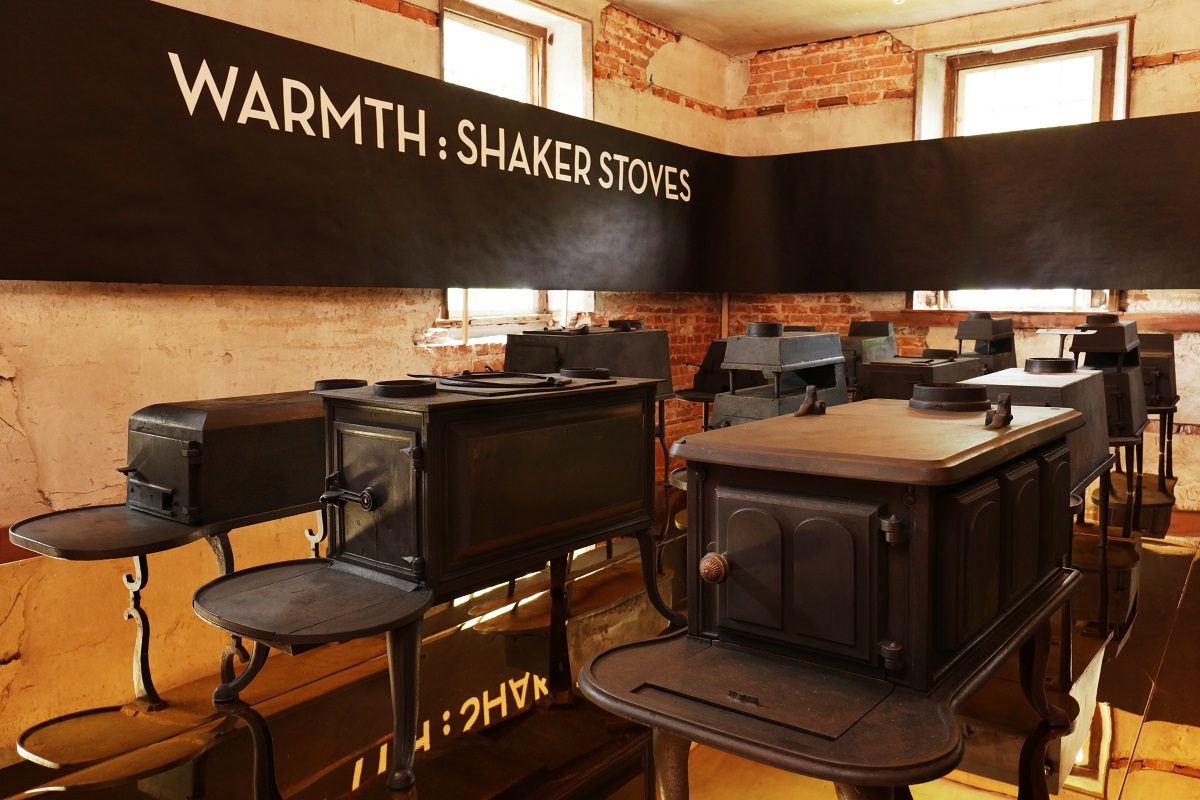 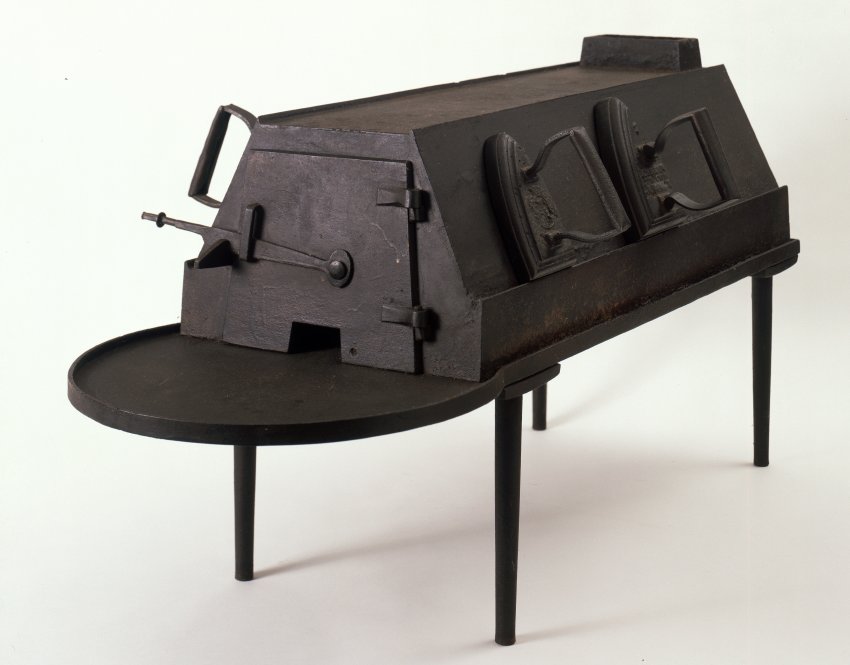 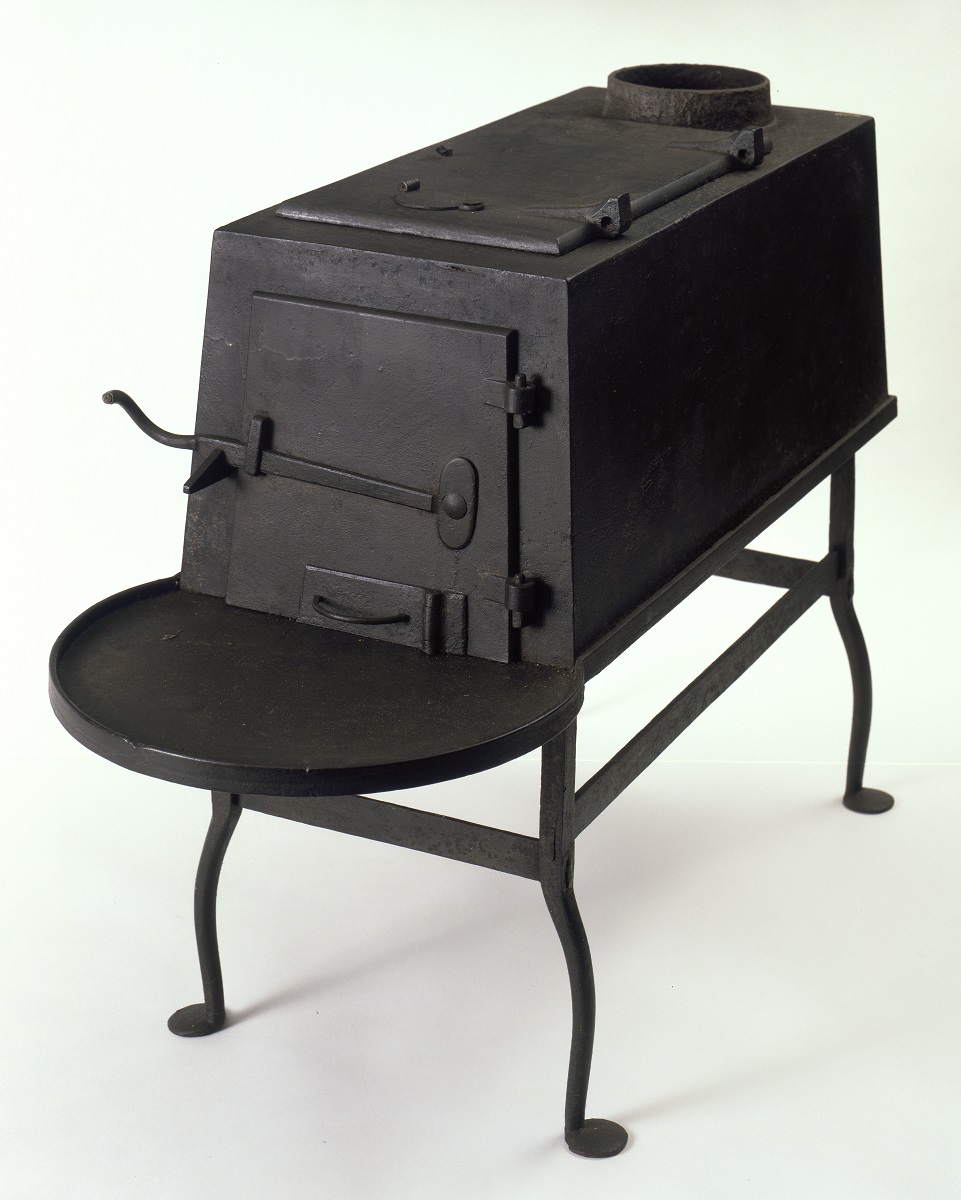 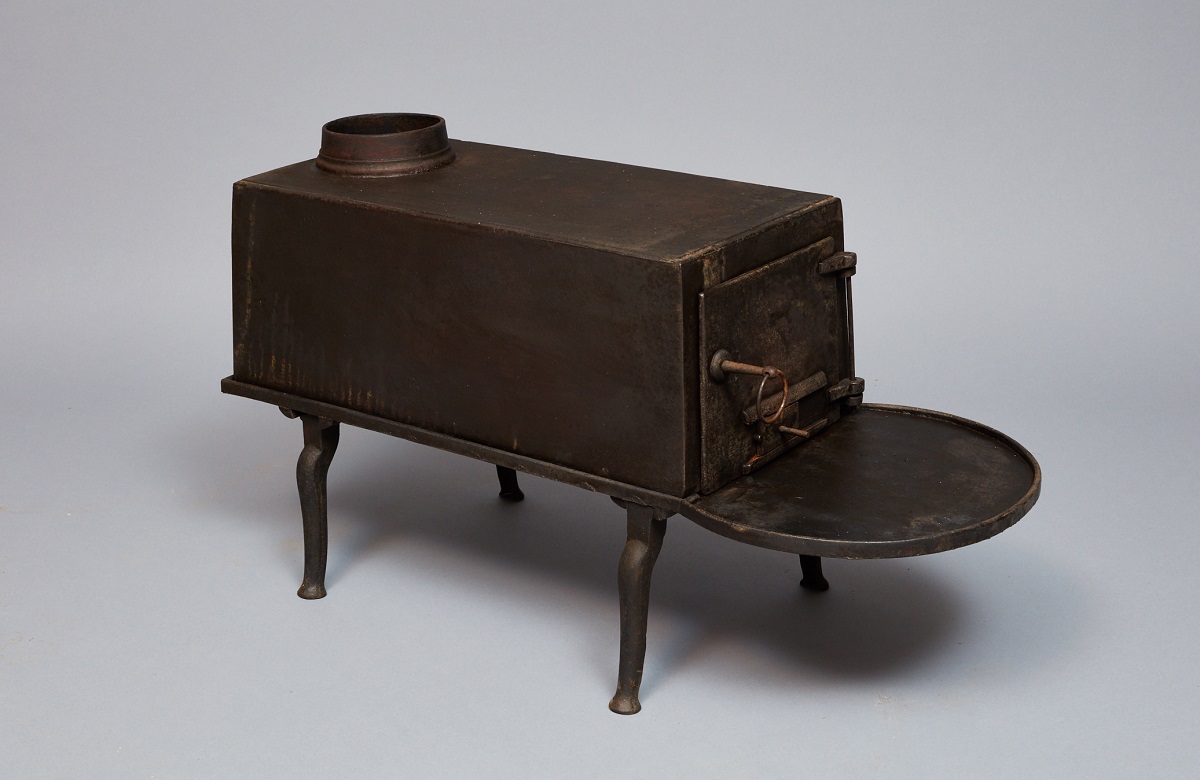 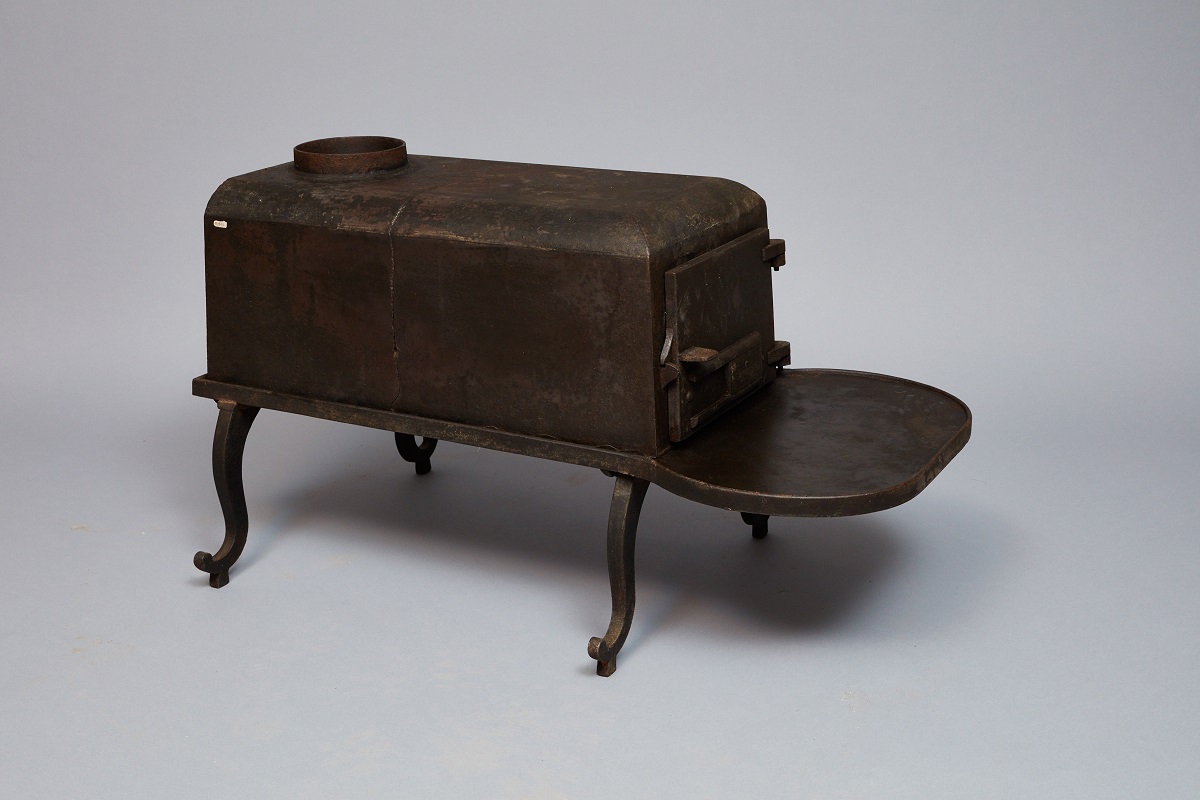 The door on the front of this stove features a smaller door to better control the draft and heat of the fire. Shaker Museum 1950.1060.1. 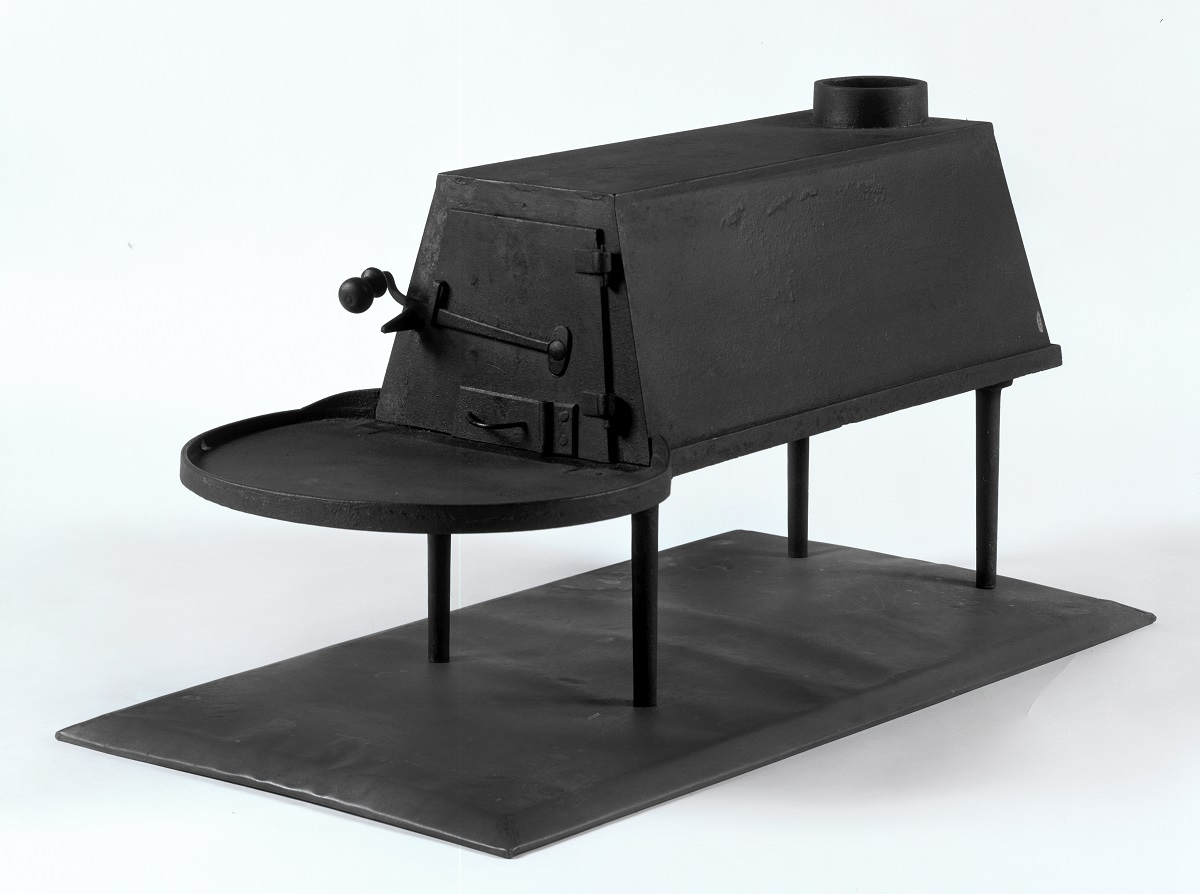 The Shakers believed this stove to be one of the earliest stoves that they made and used, dating from the early 1800s. The door is formed of sheet iron reinforced with wrought iron straps and mounted on hand forged hinges. The stove works like a fireplace with the advantage that the door can be closed to more precisely control the amount of air that fuels the fire. Shaker Museum 1953.6384.1. 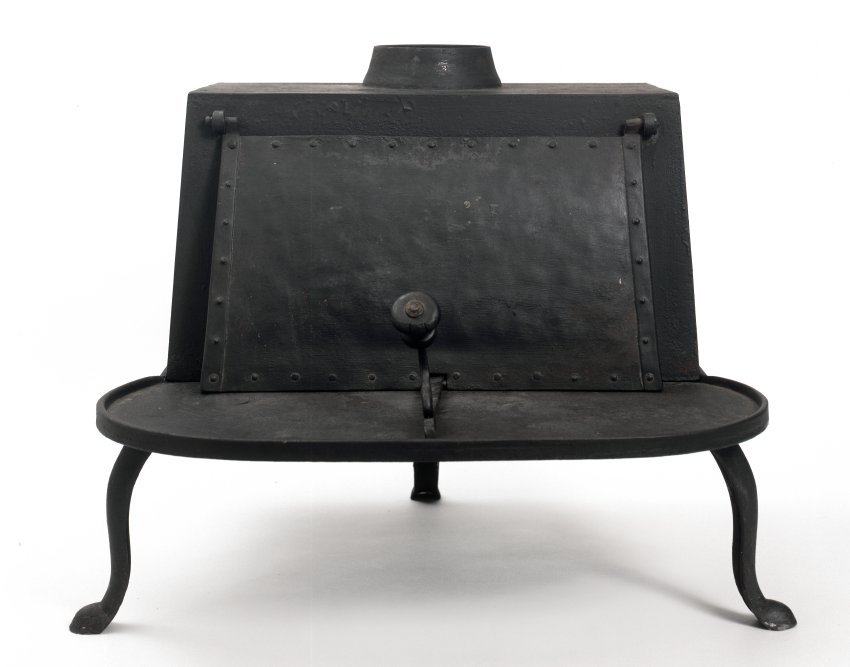 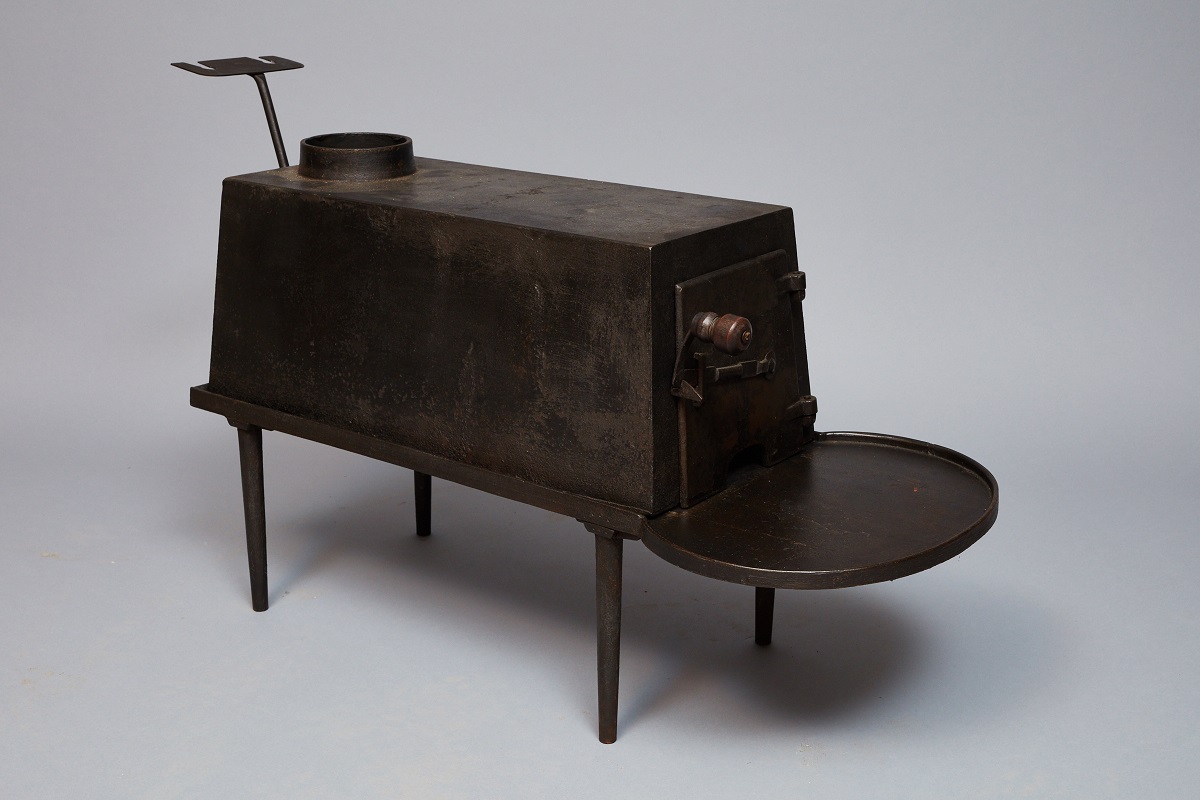 On their stoves the Shakers frequently added an upper chamber, called a "superheater." The additional chamber greatly increased the hot surface area of the stove. While they produced more heat, superheater stoves did not require any more wood than stoves with only one chamber. Shaker Museum 1957.9523.1. 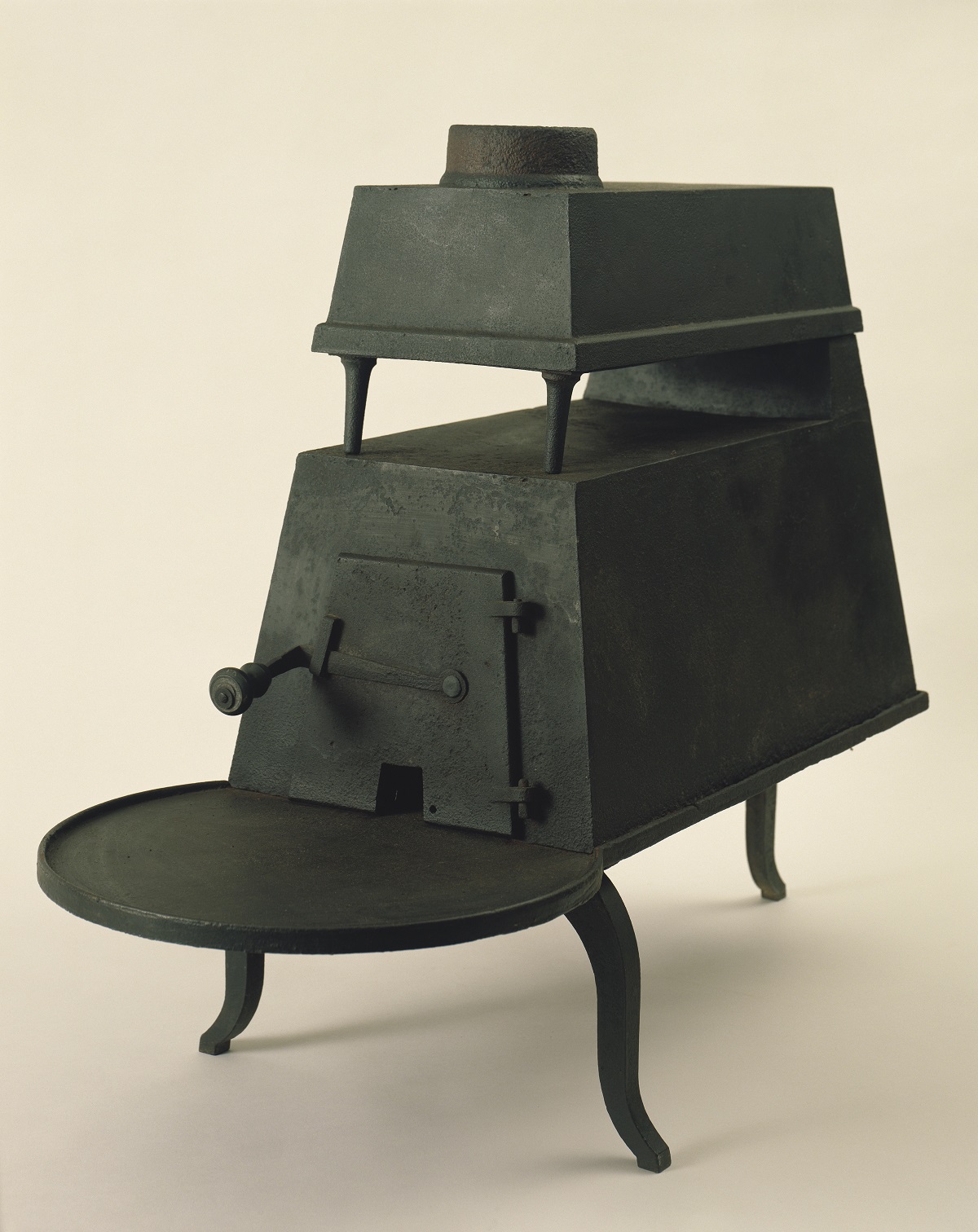 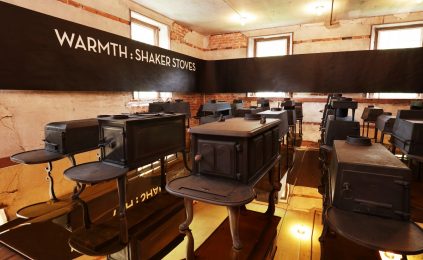 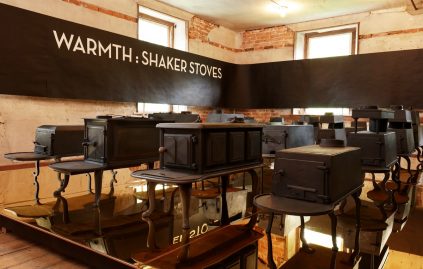 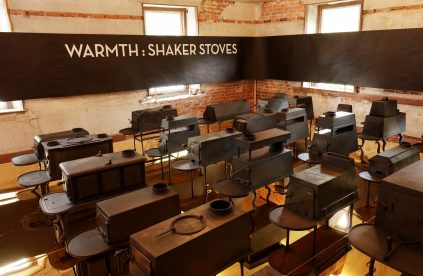 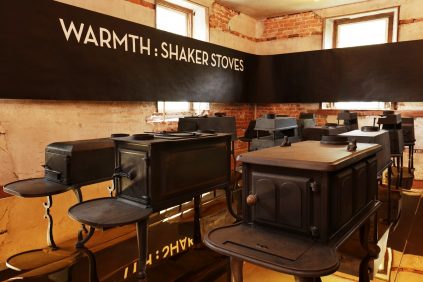 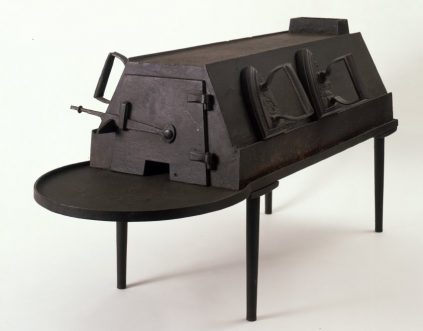 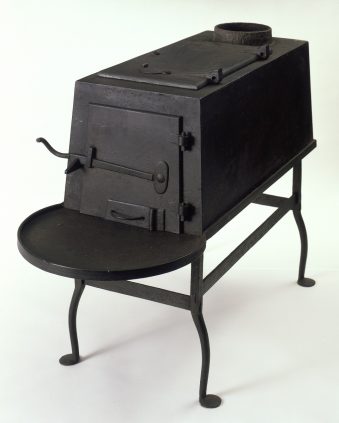 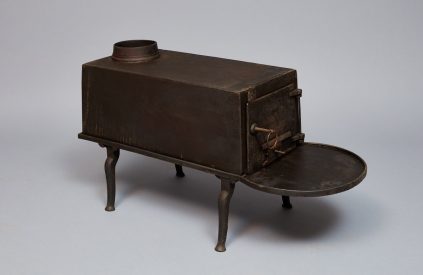 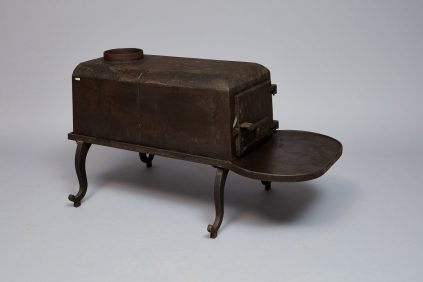 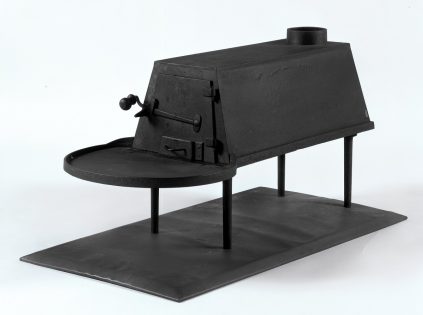 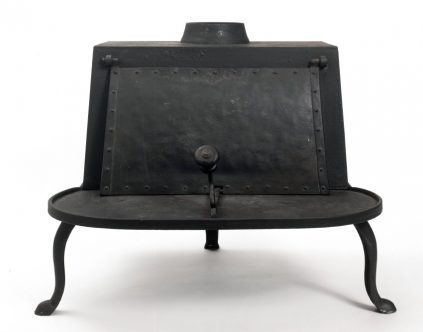 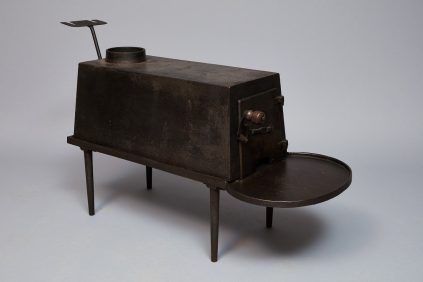 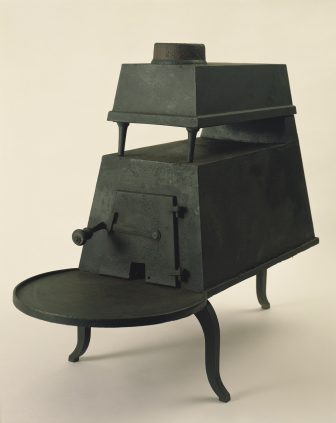 Shakers, like everyone else, enjoyed warm homes and workshops in the winter months. Initially they heated with fireplaces but soon began using box stoves for their efficiency, safety, and cleanliness. A few days before Christmas 1793 the Shakers at Mount Lebanon noted in their daily family record that they “Set two or three stoves in the great house [i.e. Church Family Dwelling House]… being the first used in this house.” Box stoves, first made from five cast iron plates bolted together and set on a three or four legged hearth plate with an extended rounded ash tray in front of the door, were commonly known in the mid-1700s. From the early days of making these stoves the workers at the iron furnaces experimented with casting the stove boxes as a single piece rather than in plates. The fewer the parts that had to be joined, the fewer places for air to get in the stove and therefore the greater the control over the rate and temperature at which fuel burned. Stoves that were cast in this way were often called Shaker stoves because of the popularity of this style in Shaker communities.

Shakers did not cast their own stoves but they did design and make the wooden patterns for them. They took the patterns to a foundry to have them cast. In 1847 the Shakers at Mount Lebanon noted that, “Benjamin [Lyon] goes to Pittsfield… and carries a load of cast iron & a pattern to get some stoves cast – one for the Elders’ Shop, one for shoe shop & one for lodging room upper shop.” Many Shaker stoves were designed with what are now called “superheaters” – a secondary combustion chamber fit above the main firebox that allowed some of the fumes leaving the stove to burn off before going into the stove pipe and then to the chimney.

The Shaker Museum has about 35 stoves in its collection in addition to several stove patterns, metal-covered stove boards that protected floors from the heat of the stoves, stove tools (shovels, tongs, and pokers), stove pipes, chip boxes for kindling, and wood boxes for stove wood – all of the accoutrements necessary to keep warm.

Warmth was on view in the Brethren’s Workshop at the Mount Lebanon historic site during the 2017 season.