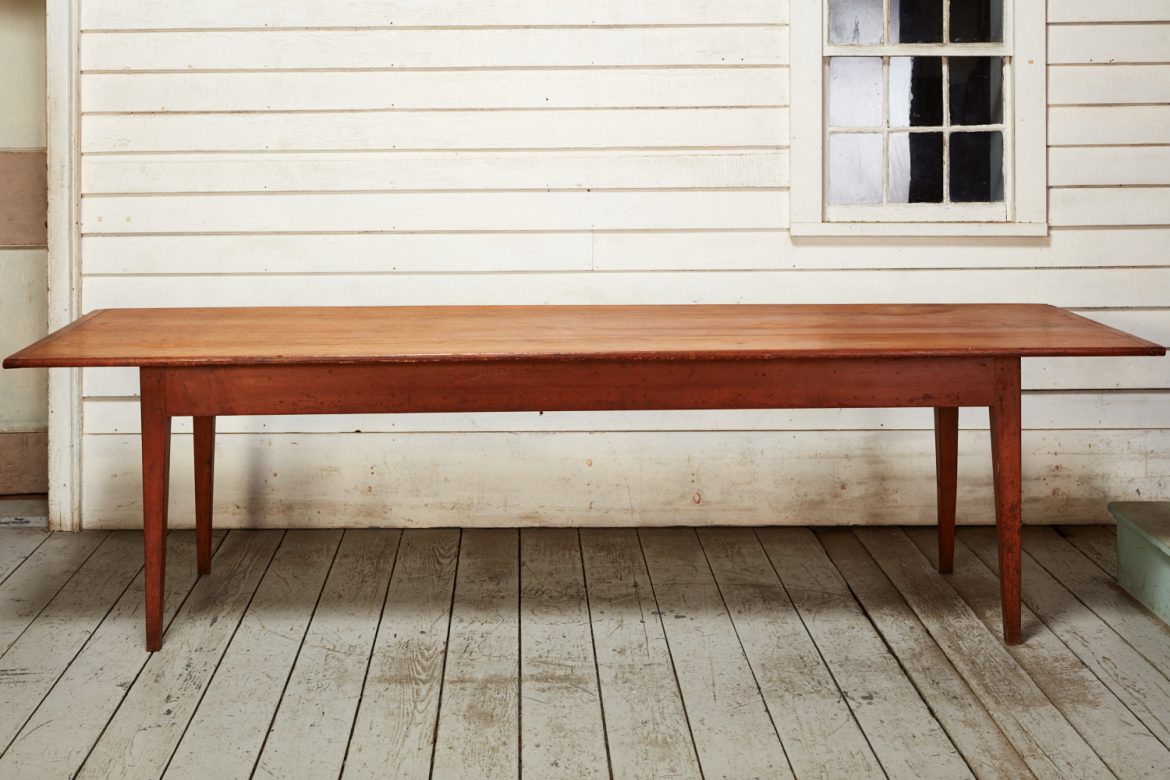 Our guest blogger this week is Maxwell Taylor-Milner. His writing has appeared in YST Publications, Bard Papers, and as a chapbook, The Collected Evenings. He has conducted interviews with artists and writers for The Believer and Arabesques Review. He lives across the river from Hudson, NY, where he is the Assistant Director at Jeff Bailey Gallery. In 1970, not long after moving […]

Our guest blogger this week is Maxwell Taylor-Milner. His writing has appeared in YST Publications, Bard Papers, and as a chapbook, The Collected Evenings. He has conducted interviews with artists and writers for The Believer and Arabesques Review. He lives across the river from Hudson, NY, where he is the Assistant Director at Jeff Bailey Gallery.

In 1970, not long after moving his studio upstate, from New York City to the hamlet of Spencertown, Ellsworth Kelly bought a table. At first glance, it could be one of a hundred near-identical antique tables: a bit worn, a bit weathered, about the size of a ten-person dining table, medium brown. At nine feet long and just under three wide, the top, made of three pine planks of three different widths framed by a narrow piece of perpendicular trim at each end, seems to float on a shallow beech apron. The outer corner of each leg is flush with the apron, defining its rectangle rather than punctuating it, The inner faces of each leg are tapered, so the negative space formed between each are trapezoidal rather than rectangular. This in turn creates an optical illusion, that each leg is angled slightly out, a vector instead of a pillar, lifting the table up instead of merely supporting its weight. Rather than one in a hundred, it is actually one of three Shaker tables, now differentiated by time and refinishings, all made around 1835 in the Shaker settlement at Mount Lebanon, New York. Kelly wanted it immediately.

The Shakers, formally known as the United Society of Believers in Christ’s Second Appearing, were a millennialist Christian sect, established in England in 1747 as a more charismatic alternative to the Church of England. Inspired by a vision, Mother Ann Lee, the movement’s most important leader, left England for America in 1774, where she, with a small group of others, would found the first Shaker settlement at Watervliet, outside present-day Albany, New York. Hailed as both the second coming of Christ and Christ’s female counterpart, Ann Lee’s revelations were the basis for the enduring Shaker principles of celibacy, gender equality, pacifism and communal living. In order to better uphold these principles, the Shakers created their own, self-sufficient communities, separate from “the world.” In order to maintain their self-sufficiency, and later to supplement it, the Shakers made and sold medicines, seeds, textiles, produce, and, most famously, furniture.

From the outset, the Shakers believed they were living in the Millennium, the thousand-year Golden Age of Christ’s reign prior to Judgment Day. As a result, it was the duty of each believer to embody that golden age, and to strive for perfection in all things. While worship was the most important activity in Shaker communities, their devotion is best witnessed by their material production, especially the meticulous craftsmanship of their furniture. As Mary Lyn Ray writes, “Because the believer ‘put his hands to work and heart to God,’ this furniture has also been termed ‘religion in wood.’ For some, manufacture of furniture was no longer an ordinary assignment of making a table or case of drawers but became an act of worship” (Ray 108). Their dedication to the task was the measure of their devotion, and the means by which the Kingdom of God would be realized.

In keeping with the Shaker sequestration from the world, the better to perfect it, Shaker furniture was not a uniquely new style, but a refinement of what the world had to offer. Certain furniture types were circumscribed by Shaker proscriptions against worldly amusements and fleshly indulgence – card tables and upholstery were off-limits. But other needs, for storage, seating, and workspace, were undeniable. Rather than invent a new kind of ornament to differentiate their furniture, the Shaker commitment to modesty commanded “a paring down of familiar forms from which applied or inlaid ornament was stripped” (Lyn 108). Much of what is considered classic Shaker furniture, like Ellsworth Kelly’s table, was made during the Era of Manifestations, the period of Shaker revival from 1837 into the 1850s, which saw the expansion of the Shaker precepts, known as the Millennial Laws, to include material details such as varnish, paint colors, and mirror size, as well as religious doctrine. The constraints of these edicts also underscored the importance of every action as an occasion for spiritual reflection: “[The Shaker] discarded the superfluous to discover a fundamental for which he was taught to labor in all his habits. Ornament detracted. Instructed in ‘gospel simplicity’ and restricted by the Millennial Laws, the believer framed simple furniture as an exercise in perfection.” (Lyn 114). In contrast to the flowing tracery and applied embellishment of, for example, the contemporaneous Hepplewhite style, the Shaker search for the fundamental resulted in a graceful balance of form and function, in which subtle variations in scale and proportion took precedence.

This search is also what must have drawn Kelly, at the time unaware of the Shakers, their beliefs, and their style, to this table, almost 150 years later. To describe the table in the abstract, is to match it to almost any work by Kelly: a series of expansive, undifferentiated, geometric planes delineated by regular proportions and arranged with a delicate attention to spatial perception. It even contains the 1:3 triptych motif that echoes throughout his oeuvre, whether in the early joined panel painting Train Landscape (1953) or one from the year after he acquired the table, Blue Yellow Red III (1971). The year previous, in “Notes of 1969,” he had written “Everywhere I looked, everything I saw became something to be made, and it had to be exactly as it was, with nothing added. It was a new freedom; there was no longer the need to compose. The subject was there already made, and I could take from everything” (Kelly). For Kelly, as for the Shakers, there was no need to invent or embellish, whether on an article of furniture, or the fleeting beauty of shadows. Slicing, wedging, to describe an eye endlessly isolating and calibrating, compressing and combining, none of these words are limpid enough for the confident but unaggressive assuredness of his forms. One might as well pick a fight with a stone. The Sabbathday Lake Shakers, the last surviving Shaker community, summarize it thus: “The Christian’s task is to live in the present moment and not to store for tomorrow the bread that comes from heaven.” (Sabbathday Shakers). To dwell in the moment, in laboring, looking, perceiving, painting, is paramount.

Kelly’s attention to the moment is also what accounts for another anecdote from his early days in Chatham. Having pulled over to photograph the curving slope of a hill under snow, he received a ticket from a passing highway patrolman, baffled at Kelly’s reasoning for documenting an apparently featureless expanse. Where the inattentive might see monotonous absence, for Kelly there’s always some there there. For Kelly, art was immanent, something that could be peeled off almost effortlessly from the everday, like shavings from a Shaker’s plane.  He continues, in Notes of 1969: “It all belonged to me: a glass roof of a factory with its broken and patched panels, lines on a road map, a corner of a Braque painting, paper fragments in the street. It was all the same: anything goes” (Kelly). Even in the smallest crook or emptiest view, there is always ample material to develop. A magpie of forms, his work plucks the missing piece of the world, the overlooked, the not-yet-seen, and gives it back to us. Forty-odd years later, he would muse, reflecting on the kinship between the Shakers and his own work: “People say ‘Oh, you’ve taken so much out.’ And I say, ‘I just haven’t put it in.’ And that’s very much a Shaker idea. They didn’t put too much in to begin with. So this what you have: form.”