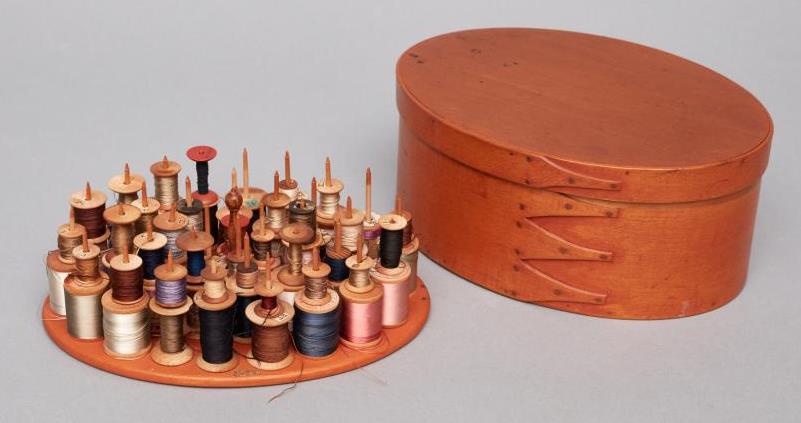 Following the thread: A gift is passed on.

It is not unusual to find personal gifts given from one Shaker to another among the objects preserved in museums or kept in the Shaker community. Often these gifts were for members of the Shaker ministry or for family elders or eldresses. The exchange of gifts seems to have often occurred when members traveled from one community to another. The oval box discussed here was one such […]

It is not unusual to find personal gifts given from one Shaker to another among the objects preserved in museums or kept in the Shaker community. Often these gifts were for members of the Shaker ministry or for family elders or eldresses. The exchange of gifts seems to have often occurred when members traveled from one community to another. The oval box discussed here was one such gift. The box was made by one of the Canterbury Shakers sometime in the mid-nineteenth century. While the box is of the common form made in several Shaker communities, the addition of a removable oval disk for holding spools of sewing thread makes it special. The removable spool holder is made of a thin piece of pine, stained with the same reddish-orange color as the exterior of the box. It has a lathe-turned center handle of black locust and 36 birch spindles to hold spools of thread. There are 68 spools of thread on the holder, some made by the Shakers and some commercially made. Thirty of the spools have small printed labels with the letters “AE,” “E,” or “ET” attached to them. The box was donated to Shaker Museum in 1958 by Nora Mallory of Chatham, New York. Ms. Mallory had a close friendship with the Shakers at Mount Lebanon and certainly obtained the box from her friends there.

A slip of paper, probably removed from under the removable spool rack, carries the inscription: “Presented to Elder Rufus,” on one side and, “By James Johnson, ae. 73 years. Chh. Canterbury, N. H.” on the other.  “Elder Rufus” undoubtedly refers to Elder Rufus Bishop (1774-1852), the senior elder of the New Lebanon Ministry when Elder James Johnson was 73 years of age. When Elder Rufus was not consumed by ministerial duties he worked as a tailor. A box for storing spools of thread was a fitting gift. Elder James Johnson (1876-1861) was a member of the Elders Order at the Church Family at Canterbury, serving as second elder from 1808-1810, and then again from 1834-1841. He was appointed first elder in 1841 – resigning that job in 1844. In several of the Shaker communities where oval boxes were made for sale, it was a member of the Elders Order in the Church Family who acted as the primary oval box maker. It was work, unlike farming, that could be put aside when other duties demanded. It is known that Elder James was a skilled wood turner. Although his work as a maker of oval boxes is uncertain, since boxes were being made by others in the Church Family at Canterbury during the time, it is likely that he made the box, the spool holder, and probably turned some of the spools.

There is no definitive record of when Elder James presented the box to Elder Rufus. Elder James said he made it in his 73d year. He was born on November 20, 1776, so probably made the box and spool holder sometime between his birthday in 1849 and the end of November, 1850. On Wednesday June 19, 1850, the Lebanon Ministry started on a journey to the Eastern Shaker communities. They traveled by rail and carriage, first to Enfield, Connecticut, then on to Harvard, Massachusetts, then to Enfield and Canterbury, New Hampshire. After spending a week (July 11th through the 17th) at Canterbury, they moved on to visit the Maine communities and then returned home. It seems – given the dates of this trip and the fact that Elder James and Elder Rufus would have had some personal contact – this is a likely time for the box to be given to Elder Rufus.

Unfortunately, Elder Rufus, two years older than Elder James, did not live long enough to fully enjoy his present. The Lebanon Ministry returned from their tour on July 30, 1850, and a short two months later began a tour of the Shaker communities in the west. A few days after he arrived at White Water, Ohio, Elder Rufus felt sick. He declined rapidly and died on July 2, 1852. His box, probably left in the Ministry’s apartments in the Lebanon Meetinghouse, was probably set aside. On Christmas Day, 1856, Elder Sister Eliza Ann Taylor was selected to be the second eldress in the Lebanon Ministry. It seems certain that with the presence of the spools of thread with the initials “E,” “AE,” and “ET” in the box, that Eldress Eliza Ann Taylor, a seamstress in her own right, at some point was given Elder Rufus’s box for her use.

In addition to Elder Rufus Bishop’s thread box, two other similar boxes have survived. One, in the collection of the Philadelphia Museum of Art, was donated to the Museum by Julius and Irene Zeiget in 1963. It is close enough in its dimensions, materials, and finish to assume that it was made at the same time as Elder Rufus’s box, but was apparently retained in the community at Canterbury. The other box is in a private collection.