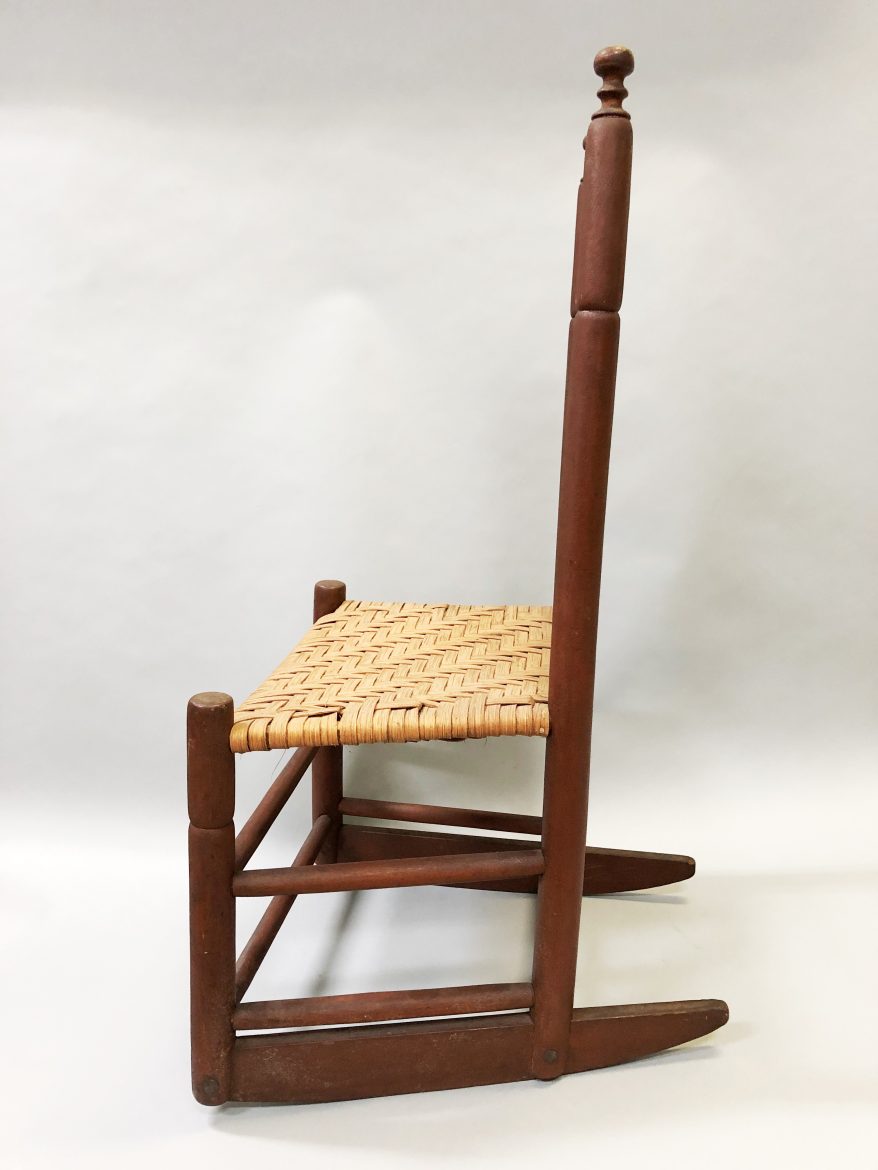 Collectors of Shaker things would likely pass by this chair without a second glance. There is little about its style to suggest it had any connection to the Shakers. Happily, the story of this particular chair has survived with it – in fact, two stories – the first of the remarkable Shaker sister who used […]

Collectors of Shaker things would likely pass by this chair without a second glance. There is little about its style to suggest it had any connection to the Shakers. Happily, the story of this particular chair has survived with it – in fact, two stories – the first of the remarkable Shaker sister who used it, and the second of how it came to the Shaker Museum.

Sister Dolly Sexton (appears as Saxton in some records and in articles in The Manifesto) was born in Stephentown, New York, on May 6, 1776 – barely two months before the American Declaration of Independence. Her parents were Sibyl and Amos Sexton, Jr., the latter of whom had probably migrated to Columbia County, New York, with his parents from their family home in Connecticut with the influx of “New Light” religionists. Dolly’s parents and grandparents were early Believers and joined the Shaker community at Mount Lebanon when Dolly was a small child. In 1883 a visitor to Mount Lebanon asked Sister Dolly if she knew Mother Ann. She answered, “Nay, Nay, I canna say I knew her, but I have seen her when she came amongst us.” (Herrick Kenyon, “The Shakers of Mount Lebanon,” Sunday Magazine 15 (September, 1886), 90-96.) Of course, as Sister Dolly was 107 years old at the time of the interview it is hard to know if she was referring to seeing Mother Ann in the flesh when she was a child – Mother Ann died when Dolly was eight years old – or if she was referring to seeing Mother in spirit form. If, in fact, she remembered seeing Mother Ann when she was a child, she would have been the last living Shaker to have seen her. Sister Dolly spent most of her Shaker life living at Mount Lebanon’s East Family. When the East Family closed in 1872, she moved to the Church Family, where she lived for the rest of her life. She was a Shaker for 103 years.

The chair in question was a gift to the Shaker Museum from Rear Admiral Mitchell Dudley Matthews (1903-1985) and his wife Jean Langford Matthews (1909-2005). Mrs. Matthews was the daughter of Edward and Inez Platt Langford and is the person who fondly remembered the piece as “grandma’s chair.” The grandmother she recalled was her father’s mother Anna Langford (1840-1926). Anna Langford was born in England. She, her husband John, and their two children apparently immigrated to the United States sometime after 1874, the year their youngest son was born in Birmingham, England. John’s fate is a mystery, but whatever  it was, apparently it led Anna to take her children Edward (1874-1959) and Mary Frances (better known as Polly) (1866-1943) to try the Shaker life at Mount Lebanon. The three united with the Church Family on May 3, 1883. Polly, around the age of 17 when she had joined, decided to leave her Shaker home three years later. She eventually married William Cuninghame Silk Langbridge (1857-1917). William had been a member of the Church Family since August, 1868. His choice to leave in 1886 seems to have been related to his relationship with Polly. The year Polly’s brother Edward turned 18 he also decided that Shaker life was not for him and moved to the Albany area, where he eventually married Inez Platt (1872-1960).  Inez, with her brother James Wesley Platt, apparently had been placed at the Second Family Shakers at Mount Lebanon around the time that the Langford family came. After both of her children left the Shakers, Anna Langford decided that she could no longer abide the Shaker life and left as well. Although none of the Langfords remained Shakers, according to Mrs. Matthews, they all remained close to the Shakers and visited from time to time from their homes in the Albany, New York, area. Members of both the Langford and Langbridge families who had been Shakers are buried in the Albany Rural Cemetery in Menands, New York.

All of the Langfords appear to have left the Shakers on good terms and were given a number of Shaker pieces as various family members began their lives in the outside world. The small rocking chair that ended up in the Matthews’s home has a story of its own. The family associates the rocking chair with Sister Dolly Sexton. While there was no formal relationship between Sister Anna Langford and Sister Dolly – Sister Eleanor Potter had been Sister Dolly’s caretaker for a number of years prior to Dolly’s death – Mrs. Matthews remembers that her grandmother frequently talked about Sister Dolly. Whatever the relationship, the family was given the chair that they believed had been used by Sister Dolly, and it was eventually given to the Shaker Museum.