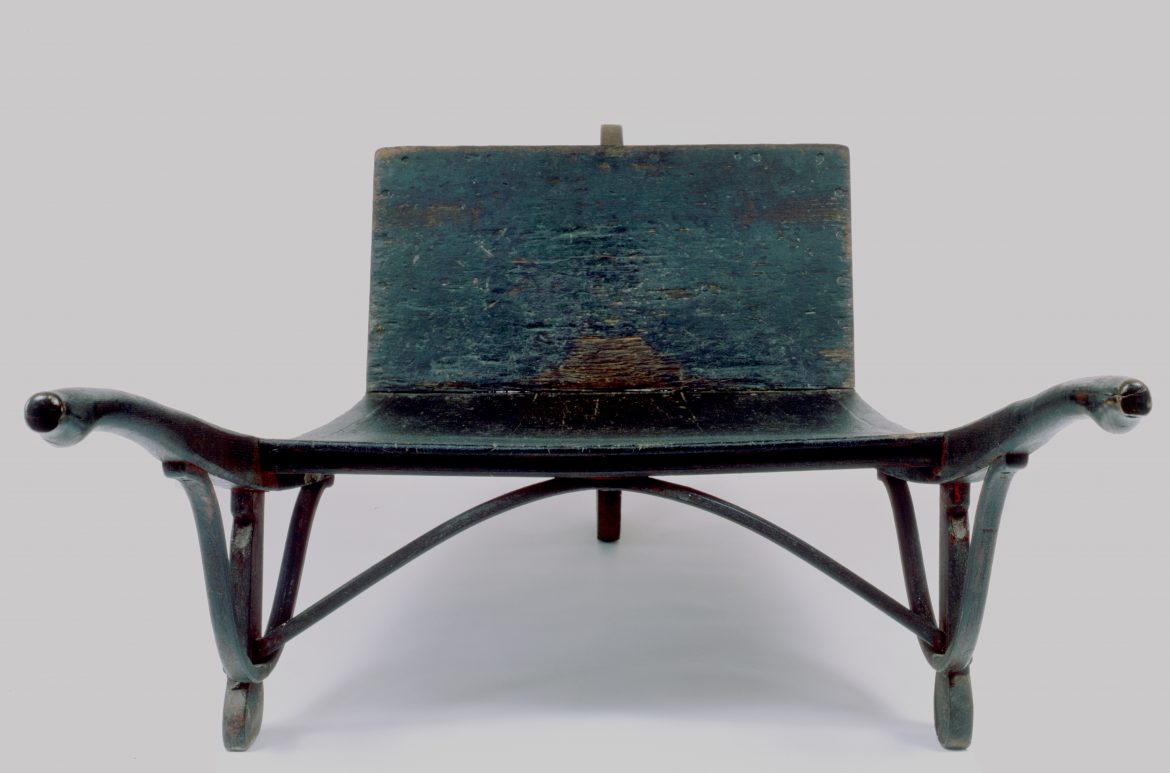 How knowledge of an artifact can evolve over time

2021 marks the 35th anniversary of “Shaker Design,” a seminal exhibition at the Whitney Museum of American Art in New York City. The exhibition, drawing from 40 institutional and private collections, was intended, as was the Whitney’s exhibition “Shaker Handicrafts” in 1935, to bridge the gap between fine art and crafts. The feeling was that a more […]

2021 marks the 35th anniversary of “Shaker Design,” a seminal exhibition at the Whitney Museum of American Art in New York City. The exhibition, drawing from 40 institutional and private collections, was intended, as was the Whitney’s exhibition “Shaker Handicrafts” in 1935, to bridge the gap between fine art and crafts. The feeling was that a more perfect bridge could not be found than in the Shaker aesthetic and craft tradition. By the end of March, 1986, objects were selected, research for the catalog was completed, and it was up to exhibition designers, publishers, and printers to get the exhibition and catalog ready for the opening on May 29. Shaker Museum contributed 21 pieces to the exhibition, about one-fifth of the whole. The Museum’s offerings included furniture, household objects, and tools. One of these tools, a simple, but elegant wheelbarrow is the topic at hand. This object is presented here with the intention of emphasizing that we are all still “in the work” of learning about the objects in our collections.

The original catalog caption for the wheelbarrow was as follows:

Clearing the land of stones was a wearisome but necessary occupation for farmers, especially in the rocky Northeast. The fieldstone fences that mark the boundaries of the fields testify to the hard work involved. At Canterbury, New Hampshire, in what came to be known as the ‘Granite State,’ a Shaker-made fence in the field south of the meetinghouse contains pieces of granite up to a yard across. The fence dates from 1793, the year after the community gathered.

This kind of wheelbarrow, low and lacking sides, was called a stone barrow. It was useful for moving smaller stone (the larger rocks required oxen and a sledge-like ‘stone boat’). The form is traditional, but the workmanship is exceptional. The wheelbarrow was probably the product of a highly skilled wheelwright. It required considerable ability to join the wrought-iron braces to the wooden parts without the addition of much extra hardware, and still create a strong joint.

The identity of Wm S has not been established, but the name and date are certainly a much later addition. The wheelbarrow was acquired from a workshop belonging to the Church Family, New Lebanon, New York.

Over years of examination and research, the Museum is able to offer some additions and corrections to the original text prepared for the catalog. The wheelbarrow is incredibly light. A close look reveals that the pine decking is very thin – probably not meant to bear the weight of heavy objects like firewood or stones. It has suffered minimal wear, tear, dents, and cracks associated with heavy use. The weight is further reduced by using a minimal amount of iron in its construction. Only an iron “tire” around the outside of the wheel, the axel, thin pieces of metal bent around the bottoms of the two feet, and the four thin rods holding the head-board upright, are made of metal – all else, including the curved supports for the legs, are of wood.

While the wheelbarrow is described as painted dark green – a color conveniently obtained by mixing lampblack with chrome yellow pigments – there is evidence that it was once painted bright red. The later blackish-green was probably applied at the same time the inscription “Wm S | 1907” was added. It may have been added by the painter him or herself.

While in 1986 it was not possible to find a Shaker or anyone associated with the Shakers to whom that inscription would apply, with the addition two years later of a manuscript from the collection of Charles and Helen Upton – an account book titled, “Cash Accounts, 1897-1909,” – from the Center Family at Mount Lebanon [“Cash Accounts, 1897-1909,” Center Family, Mount Lebanon, NY. Shaker Museum: mss. no. 1957.10474.1.], a name emerged that fit the inscription. William Sedgwick (1879-1950) was one of a number of members of the Sedgwick family that resided in New Lebanon and Stephentown, New York, who were employed by the Shakers. Apparently his older brother or an uncle, Elton Sedgwick (1865-1939), had been in the employment of the Center Family for a several years when, at the end of May, 1907, William began receiving regular payments of $30 each month – the same day rate that Elton was paid. While William’s relationship to Elton is not clear, the payments were sometimes made to Elton for William. With this information in hand a look at a diary kept by Elder Timothy Rayson at the Center Family turned up several notes about William. [Elder Timothy D. Rayson, “Diary, 1901-1909, Center Family, Mount Lebanon, NY. Shaker Museum: mss. no. 1988.1.4 (Upton Collection).]

On April 10, 1907, “Alonzo [Hollister] at the Med[icine]. Business. Also S[arah] Cutler & Timothy [Rayson], also Will Sedgwick,” and three days later, “Continued at the Med. Will Sedgwick helping at the filling of the Boxes with Browns Medicine.” There are other entries in Elder Timothy’s diary that place William working the medicine shop at the Center Family. However, it was not all work for the young man. On June 15, it was noted that Brother Ferdinand Ganebin, “the two Twins and Wm Sedgwick go to Pittsfield to see Buffalo Bills Wild [West] Show,” and when not needed in the medicine shop, one finds William, “hoeing in the kitchen Garden.”

William Sedgwick continued to receive his regular $30 per month pay through the end of the entries included in the account book – the last for September 30, 1909. In January, 1909, Henry Terry Clough, a former Shaker brother and his wife, Julia Clough, also a former Shaker, came with their three daughters to live at the Center Family. With Elder Alonzo Hollister’s health failing, the family was in need of someone to manage their medicine business – and Henry seemed to be a welcome answer. Henry and his family resided in the old Center Family Dwelling (now called Ann Lee Cottage) and he, Julia, and their girls worked at the medicine business. This apparently made it possible for the Elder to find other employment for William Sedgwick as his name does not appear associated with the medicine business after this date.

On December 27, 1907, Elder Timothy’s diary notes that “Elton [Sedgwick] paints one of the Cutters.” (A cutter is generally an uncovered light-weight one-horse sleigh with a single bench seat.) It is certainly a tempting leap to think that Elton and William were spending a winter day together painting these modes of transport together – but it remains only tempting until we know for sure. While the new light shed on the relationship between the Shakers at the Center Family and the Sedgwicks may answer the question of who painted the wheelbarrow – the question of who made it remains a mystery. Since the wheelbarrow appears to have been used for moving boxes of medicine around at the Center Family’s medicine shop rather that in the fields to move rocks, perhaps a clue to its origin may be found in the fact that there resided three brothers at the Center Family, Brother Benjamin Lyon (1780-1870), Brother Richard Bushnell Woodrow (1828-1909), and Elder Giles Bushnell Avery (1815-1890), all of whom are identified as wagon-makers and as such, certainly possessed the skills required to make such a fine wheelbarrow.