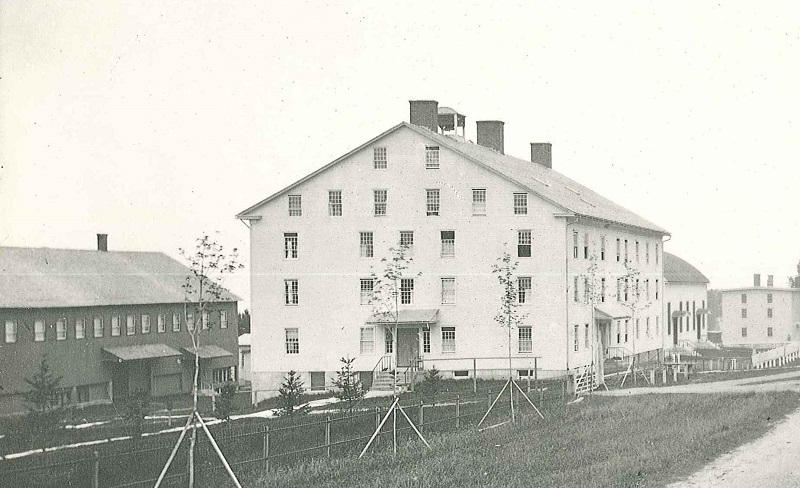 This detail of a photograph of the Church Family site, shows the Great House at center and the Sisters' Shop at left rear; both were destroyed in the fire. Shaker Museum | Mount Lebanon 1960.12583.1

The bell sounded at 11:30 AM on Friday, February 5, 1875, just before the Shakers were called to dinner. As the bell continued to toll, they realized it signified fire rather than the meal. As Sister Anna Dodgson described it in a journal kept by the Church Family deaconesses, “the first signal for dinner continued […]

The bell sounded at 11:30 AM on Friday, February 5, 1875, just before the Shakers were called to dinner. As the bell continued to toll, they realized it signified fire rather than the meal. As Sister Anna Dodgson described it in a journal kept by the Church Family deaconesses, “the first signal for dinner continued to peal its notes and soon the appalling cry of Fire!!! startled every nerve and sent the blood in a distracted counter course through the system.” The fire began in the structure that housed the Sisters’ Shop and woodshed, but quickly spread to the nearby dwelling known as the Great House. Many began removing as much as they could of clothing, bedding, and other articles. The scene quickly became chaotic as the fire spread. Then, as Sister Anna wrote, “Next the frightful cry, ‘Leave the Building, every person, or your life is lost.’”

Portrait of Sister Anna Dodgson. The day after the fire, she wrote, “We arise to our duties but a heavy atmosphere overhangs many of the more sensitive part of community. What awaits us?” Shaker Museum | Mount Lebanon 1952.4660.2

By the time the fire was extinguished, the Sisters’ Shop, ministry shop and residence, ice house, gas house, ox barn, cart shed, and the Great House were lost. The infirmary, school, and meetinghouse were damaged, but saved. Sister Anna wrote, “We are now subjected to live on the contributions of our Friends. To what extent our good friends will provide monetary relief is a question of time, for we are really destitute.”

Journals kept by the Shakers were not typically effusive or long-winded. Deaths of Shakers were noted but not often dwelled upon; the death of President Abraham Lincoln was noted in the official Church Record with the brief entry, “News reaches us to day of the death of President Lincoln by J. Wilkes Booth, an Assassin. Horrible.” Nonetheless the accounts of some of the survivors, such as those written by Sister Anna Dodgson and Eldress Augusta Stone, are long, detailed, and moving. As Eldress Augusta wrote at the end of her retelling of the events, “The day far spent, our anxiety is intense for the wind continues a heavy gale, and we know not what the night will bring forth, the trouble of getting about, the biting cold, where not warmed by the fire, and every thing conspires to make us feel that the fates are against us….”

Portrait of Eldress Augusta Stone. On February 27, she wrote, “The weather is cold, windy and disagreeable all of the time, and we almost despair of ever again enjoying pleasant weather, or pleasant things generally.” Shaker Museum | Mount Lebanon 1955.7349.1

Even the official Church Record, kept at that time by Elder Giles Avery, gives a vivid report. On March 2, he wrote, “One of the most horrible winds we ever saw blew all night last night; few could Sleep, however tired, & the writer of this not a particle, from a burned hand.- The great excitement of the fire, the wind & Storm, produced consternation, & fear & terror are depicted in all faces.”

Portrait of Elder Giles Avery. On February 27, he badly burned his hand attempting to distinguish another fire that destroyed the Herb House. Shaker Museum | Mount Lebanon 1960.12206.1

These journals reveal not only the trauma endured by the Church Family but also the support provided by some in the outside world and by Shakers in other communities near and wide. The other families of Mount Lebanon were first to respond. Elder Giles wrote, “Sisters come up from Canaan, from Second, South & North families, & help, all day.” Sister Anna noted, “Our friends have, ever since the fire, been forwarding baked provision, bread, pies and doughnuts with mashed potatoes. So amid our sorrow, we need not go hungry,” and added the next day, “Our friends in the Village are providing for our comfort… bringing in donations as liberally as was provided for the Chicago disaster.” The Center Family took in a number of Shakers, most notably elderly sisters such as Dolly Sexton (then 99) and Betsy Haskins (then 84), who required more care. Each of the Mount Lebanon families, as well as the Shakers of nearby Hancock, provided firewood, as the Church Family’s supply had been lost and the weather continued to be very cold long after the fire.

The journals also record cash donations made by several communities, including $500 each from Hancock and Enfield, NH; the Maine Ministry brought $1,000. No less important were the supplies that were sent. Sister Anna wrote that they received from Canterbury six boxes of clothing and bedding, adding, “The [Brothers] and Sisters are now quite comfortably supplied with bedding & clothing for the winter.” Several days later, she wrote, “A large box containing bedding & clothing [has been] sent from South Union…. Beautiful good clothing.” Union Village, OH, sent “several boxes of articles” as well. The Shakers at Watervliet, NY, sent “cheese, butter, dried beef and tallow shortening, with rice, sugar, and apple and pear sauce.” The Enfield, NH Shakers sent six dozen pails and tubs, while Enfield, CT sent “knives, scissors, thimbles, pins, needles & thread.” Shakers at Hancock sent fabric for summer dresses and kitchen furniture. On April 10, Elder Giles recorded that the Church Family received “a present of about 80 barrels of flour from South Union,” calling it “A liberal donation indeed.”

Beyond the immediate aftermath, the Shakers continued to provide support as they could. The Hancock Shakers sent teams to assist with transporting sand and bricks to the Church Family site; the new dwelling house that was completed at the end of 1875 stood four stories high and included several wings, so transporting the necessary materials was no mean task. As Eldress Augusta wrote on February 20, “from all Believers in the land, come… every thing they can spare and much more than they are able to give, for our sustenance and comfort. Can we be grateful enough for our true relation to Brethren & Sisters?… may I be a worthy member shall ever be my great concern.”

People from the outside world helped as well. Elder Giles recorded that Ezra Waterbury of Hudson, NY, with whom the Shakers had had business dealings, donated a new bell for the dwelling house, worth about $200; a man named Gillson, who owned a forge in Hudson, offered “$100.00 worth of castings towards the New House.” And on April 26, “The Hudson people bring out the gift [of a] fire engine to day & present it to Society.”

In the deaconesses’ journal, Sister Anna Dodgson states that the losses resulting from the fires amounted to $125,000 – $150,000. Though the gifts and donations made would not have amounted to anywhere near that amount, they demonstrate the goodwill of the Shakers’ worldly neighbors and the strength of the feeling of union shared by the Shakers even when divided by distance. They also show that small gestures can have great meaning and impact. As Eldress Augusta wrote, “Many, many thanks are due to all of our friends in the Village for their sympathy and kindness in this time of distress and dismay, also the towns people, generally, manifested by their deportment a kind and helpful spirit.”

One response to “Mutual aid: Recovering after a devastating fire”