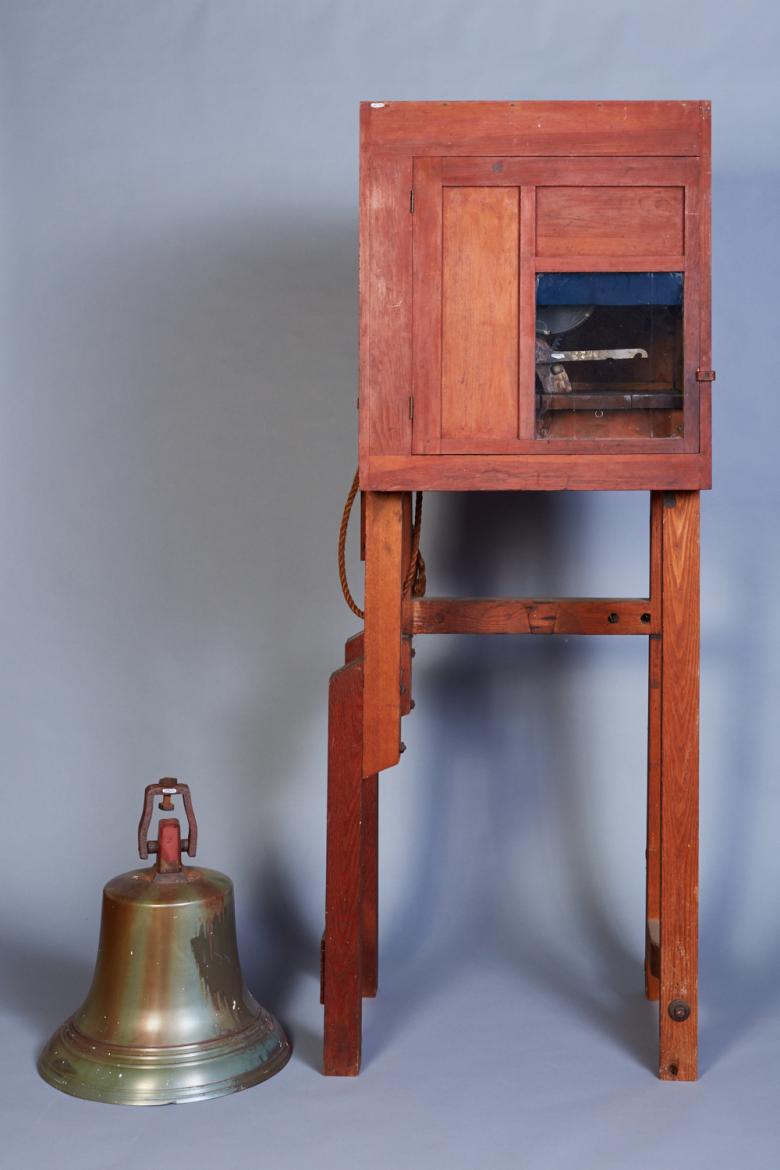 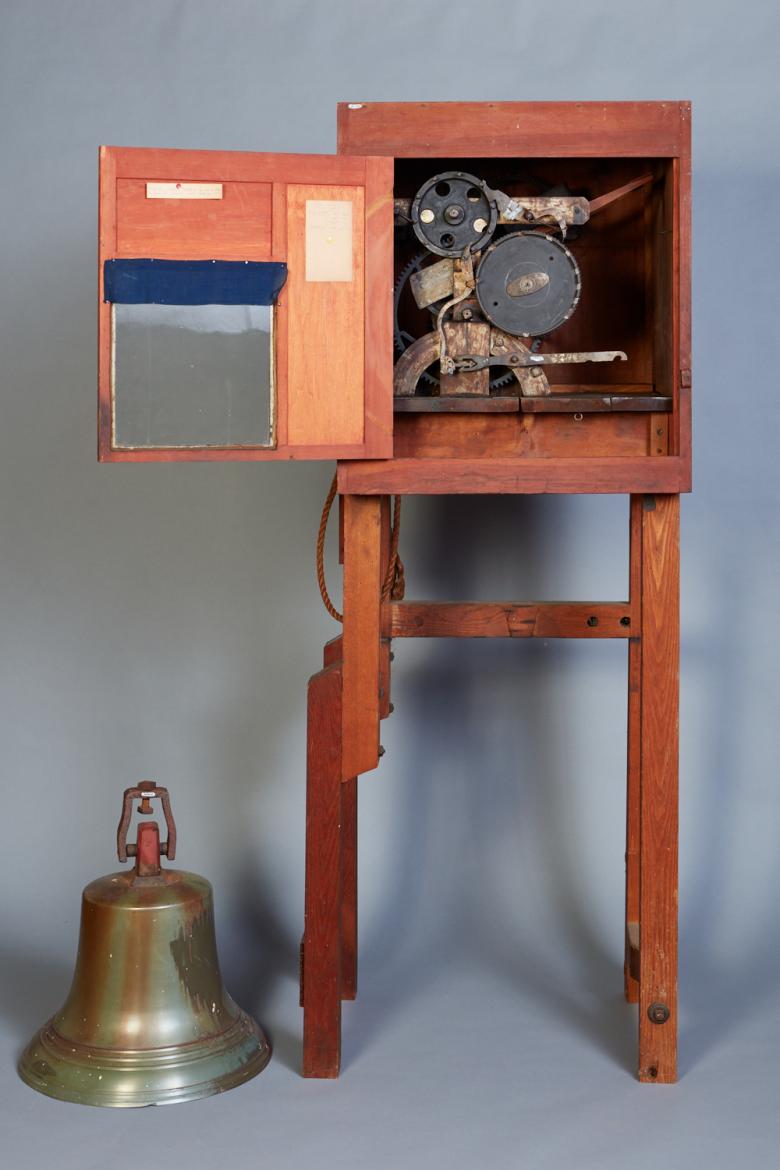 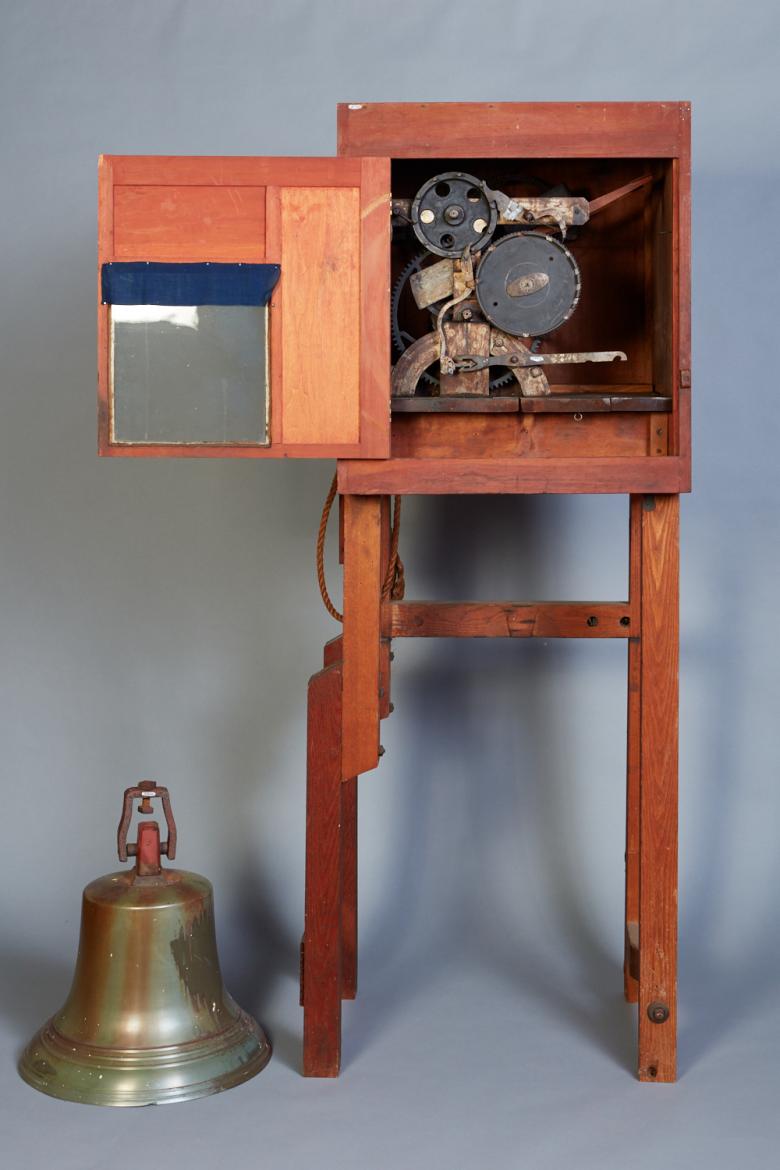 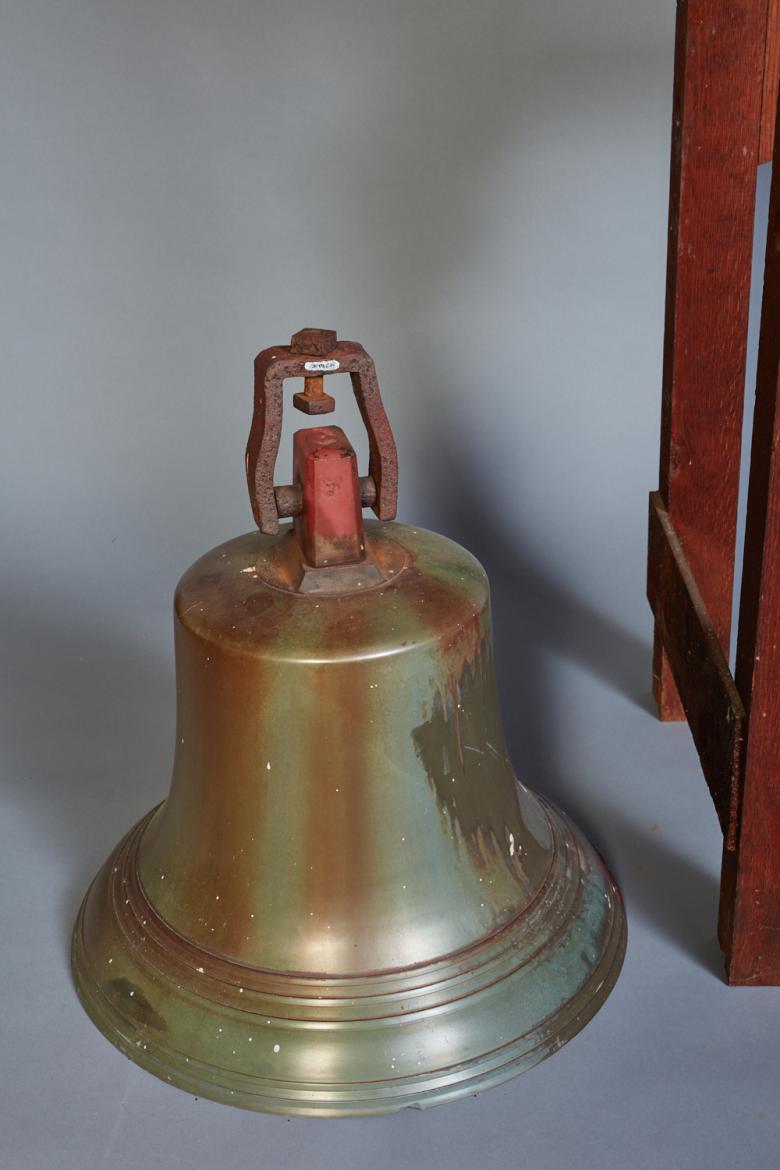 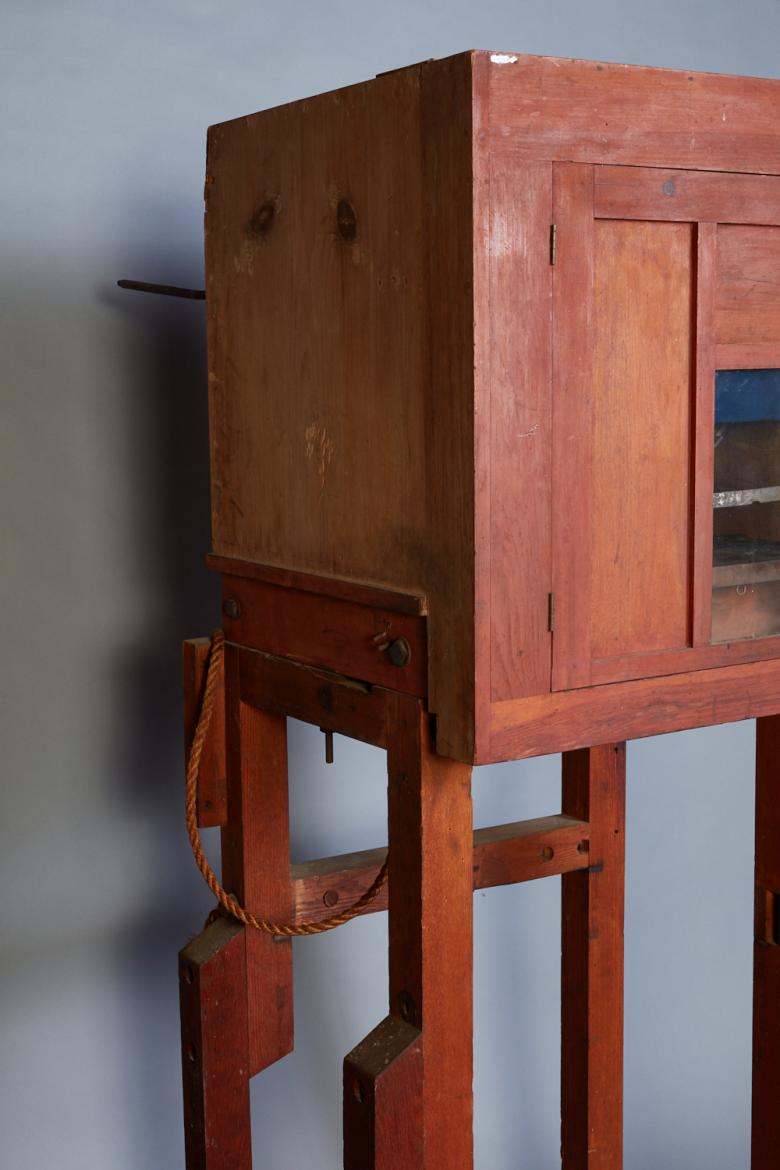 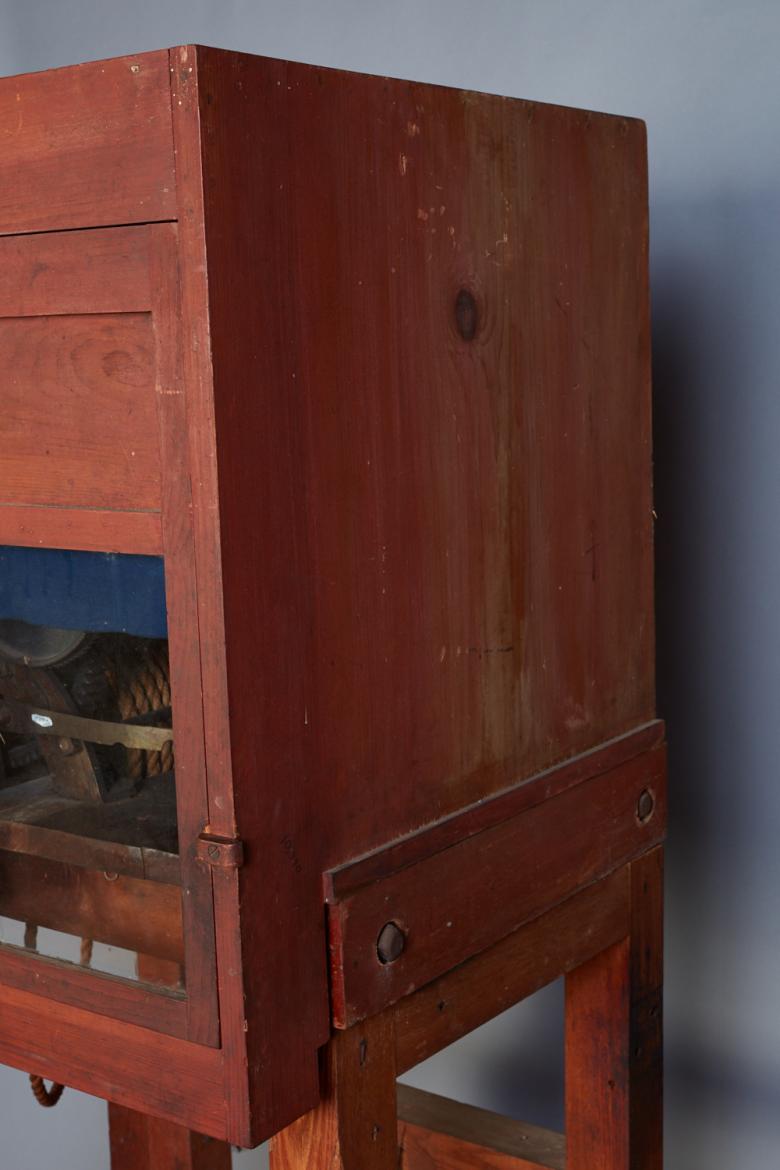 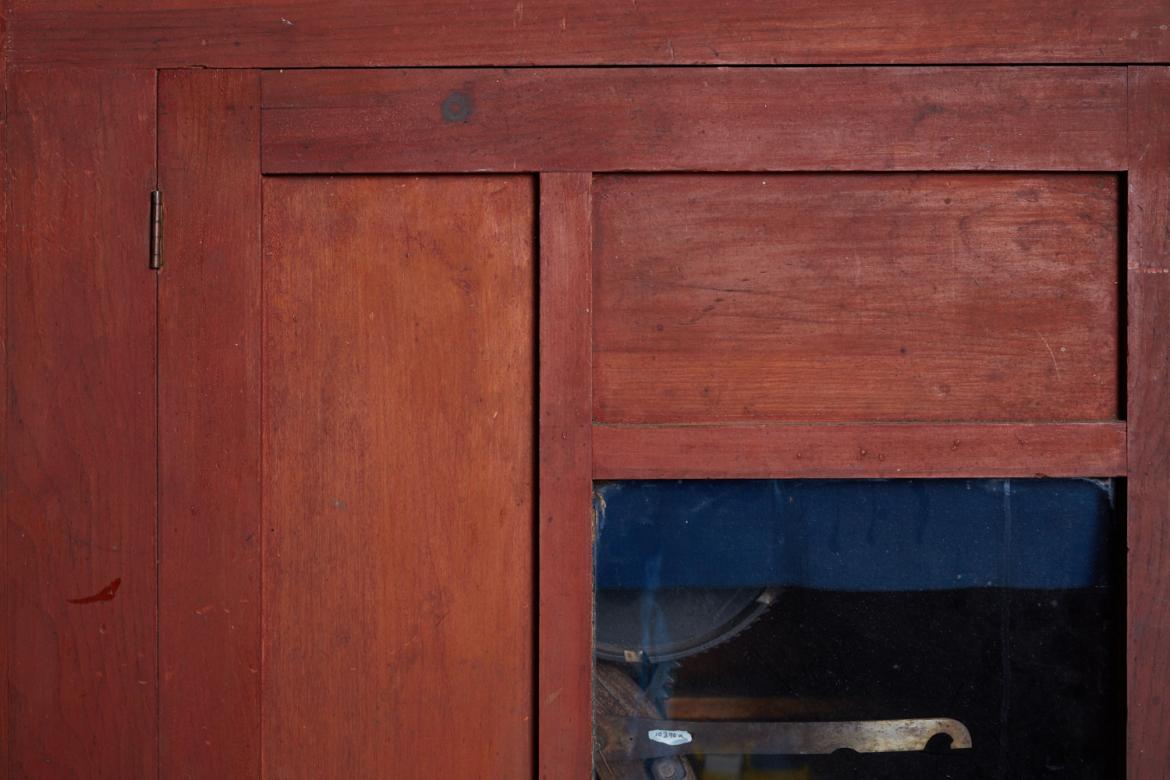 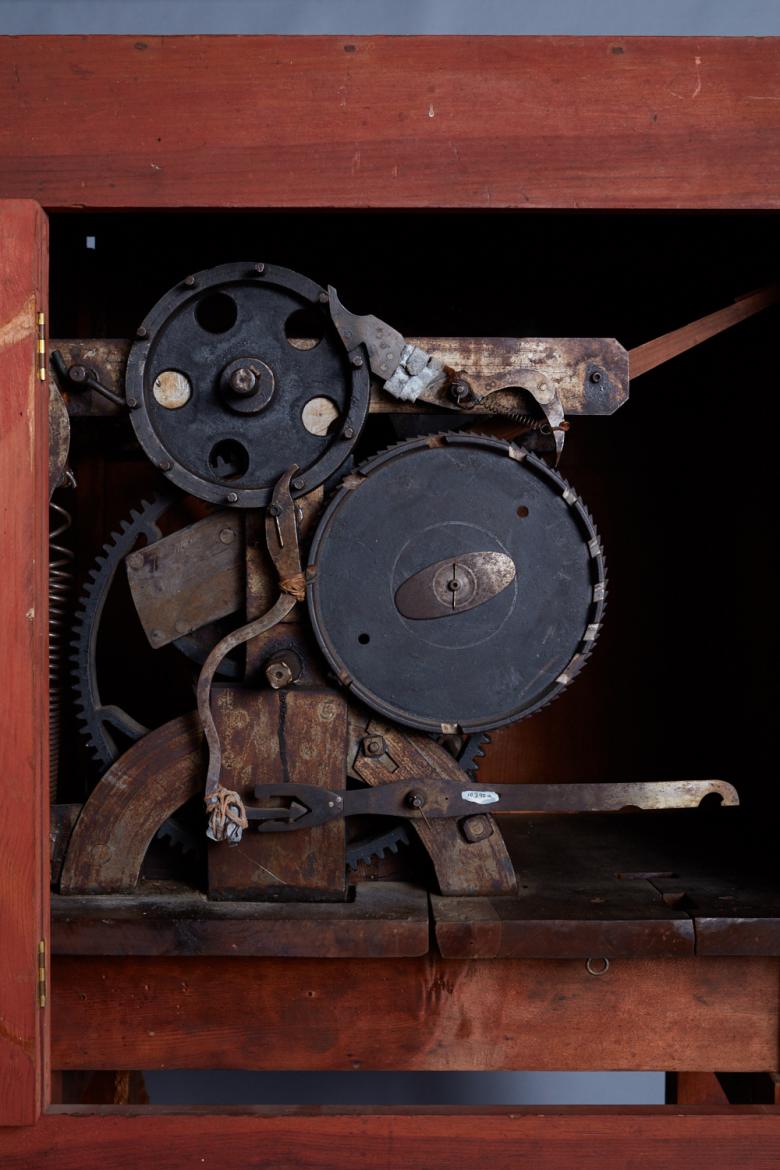 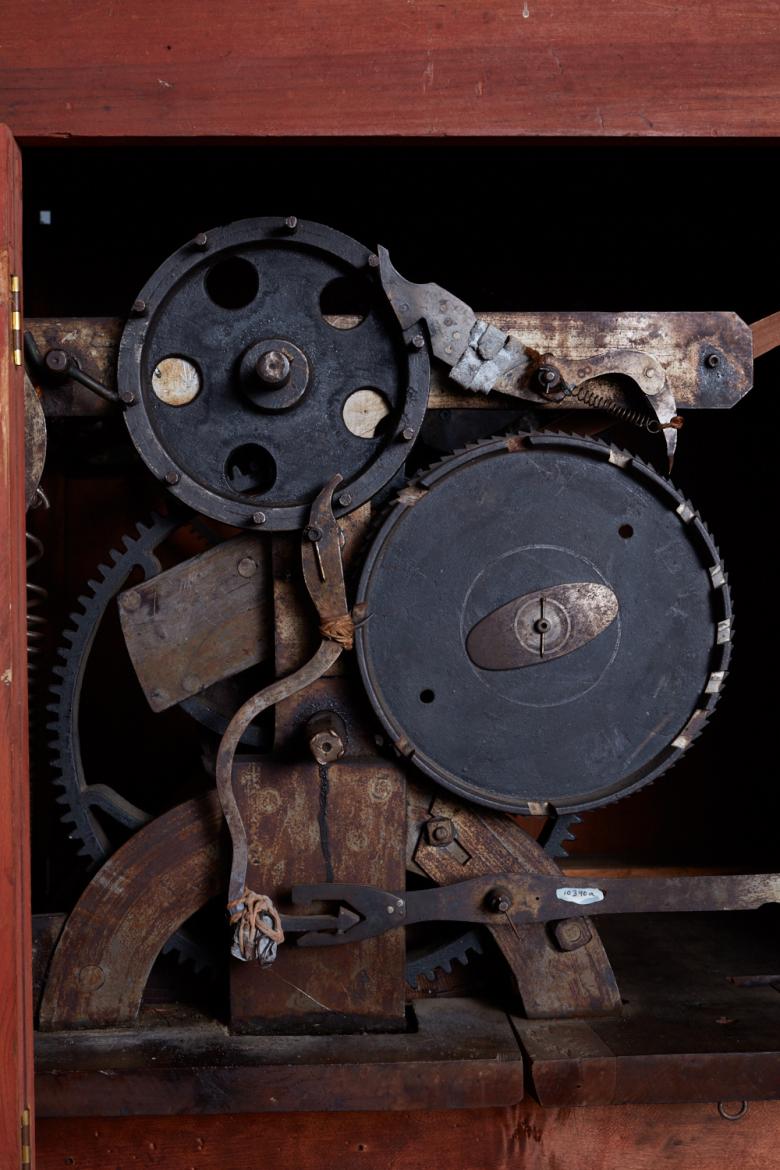 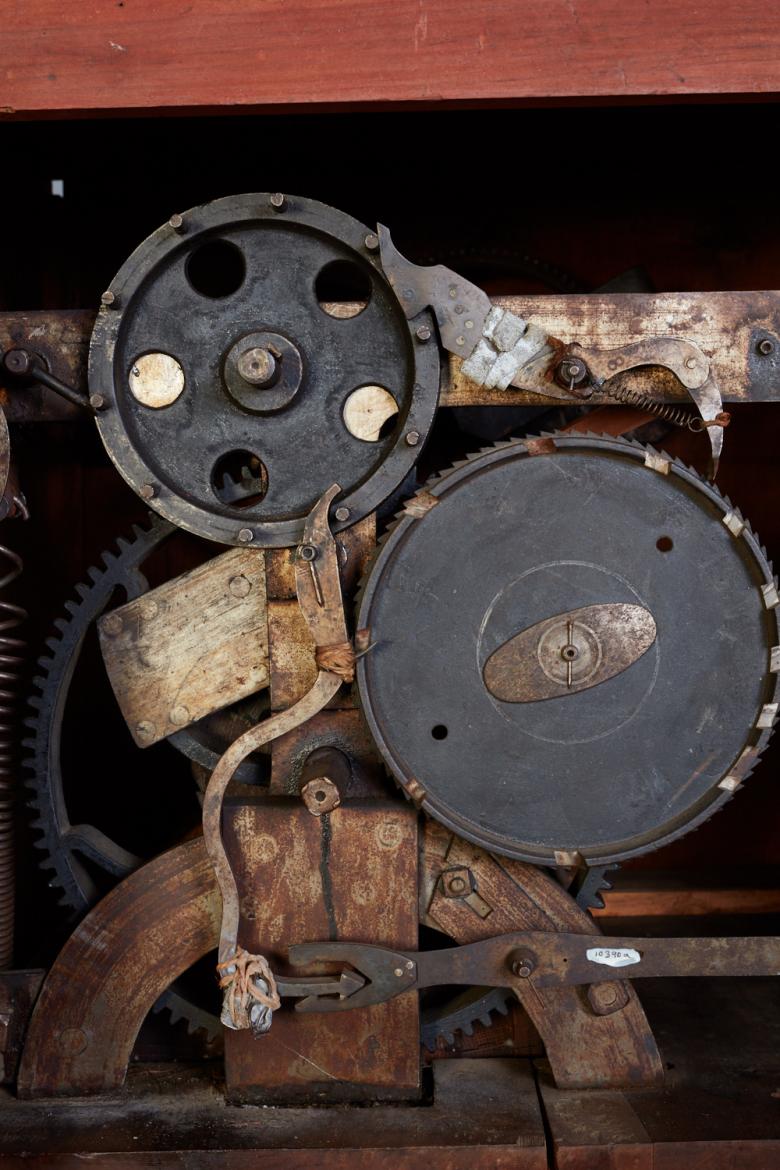 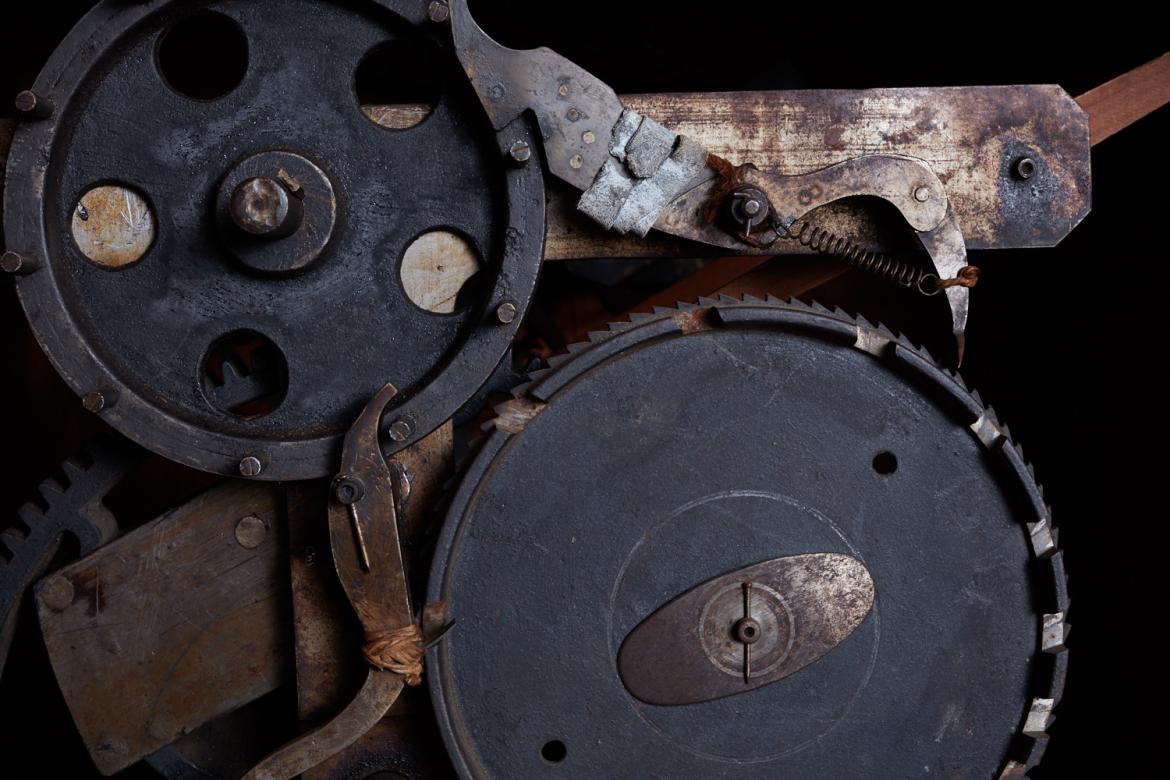 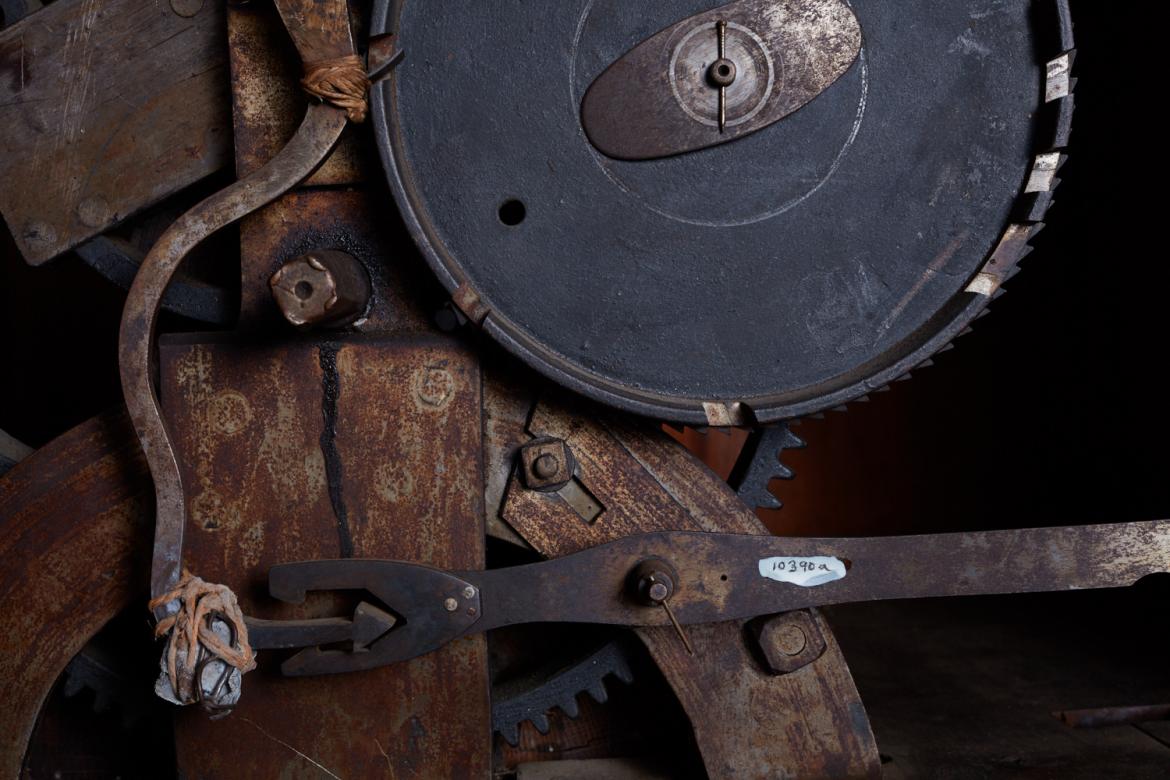 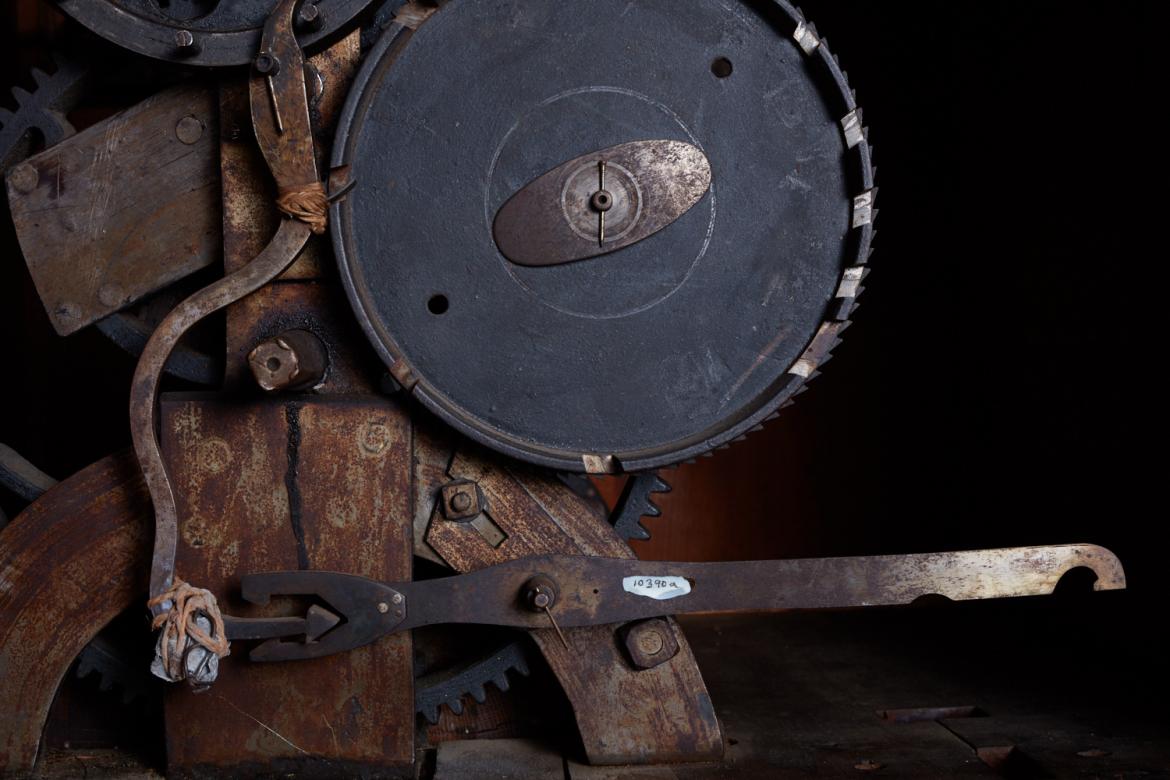 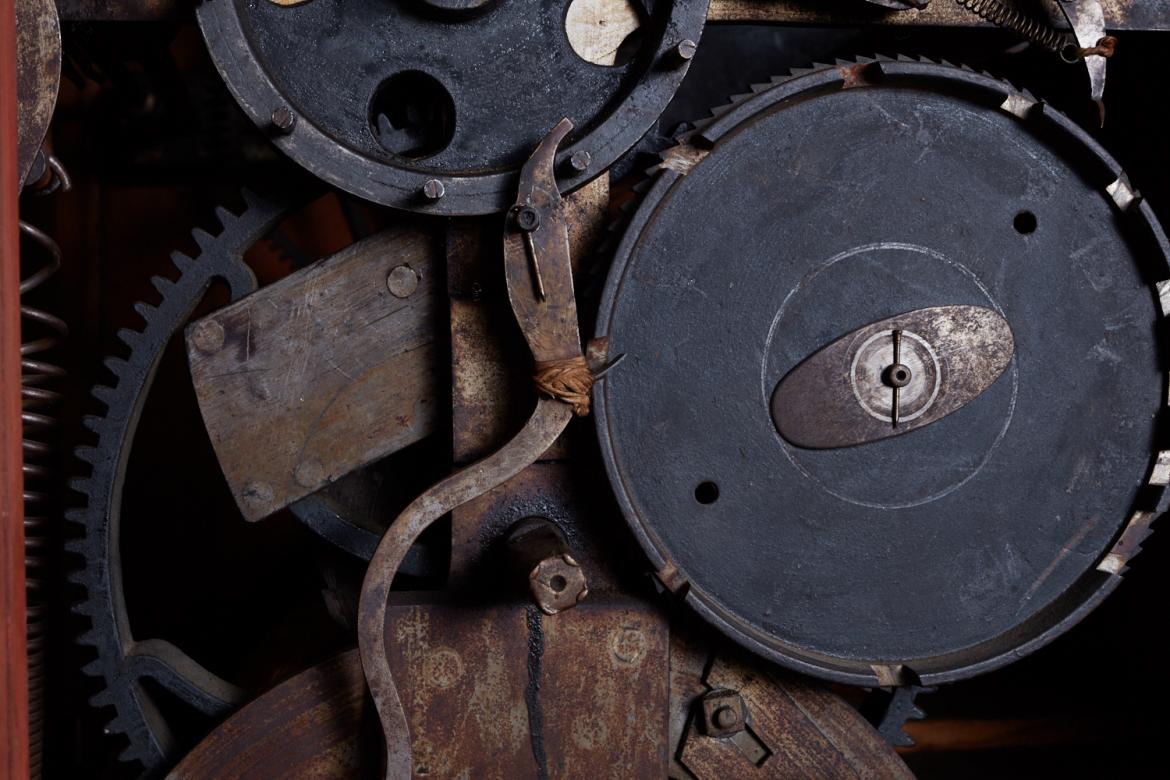 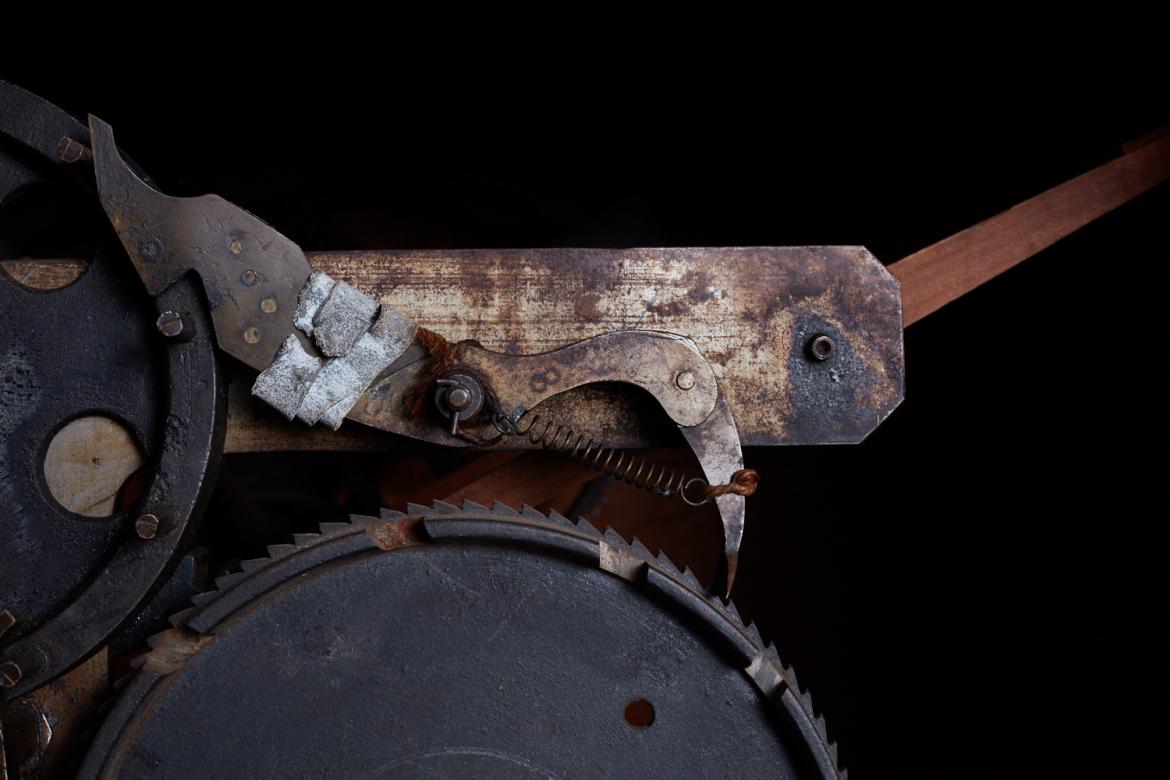 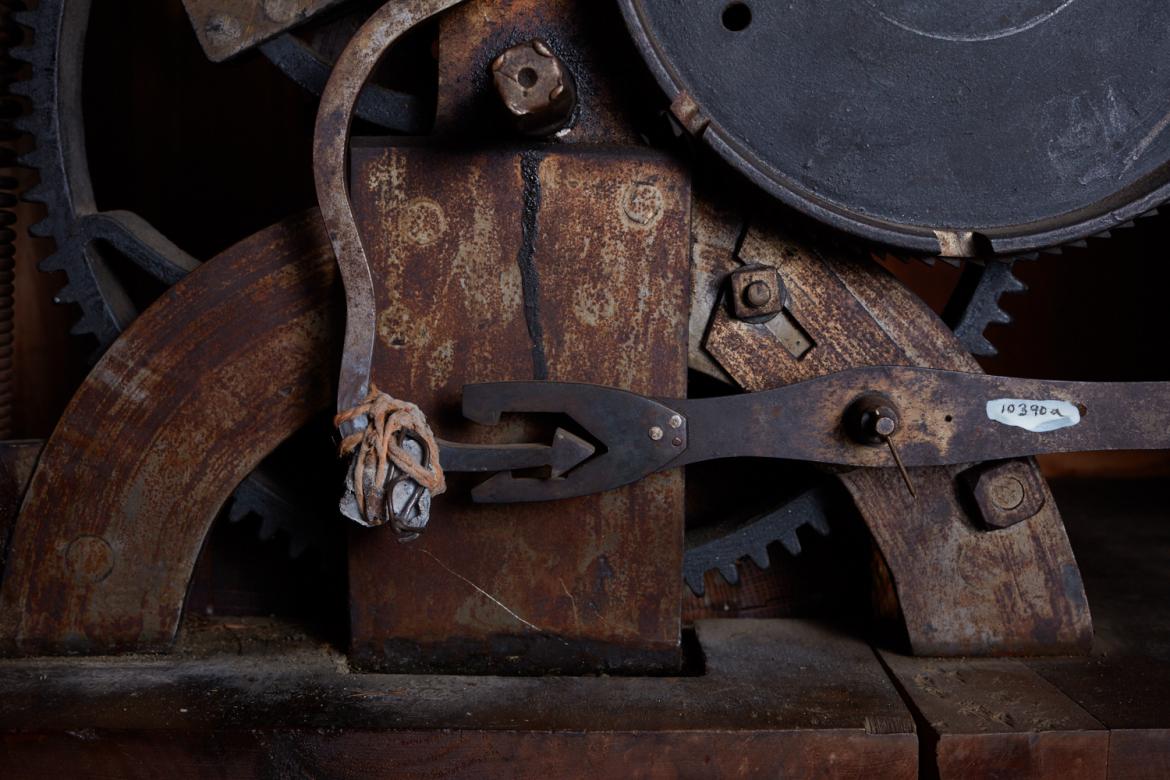 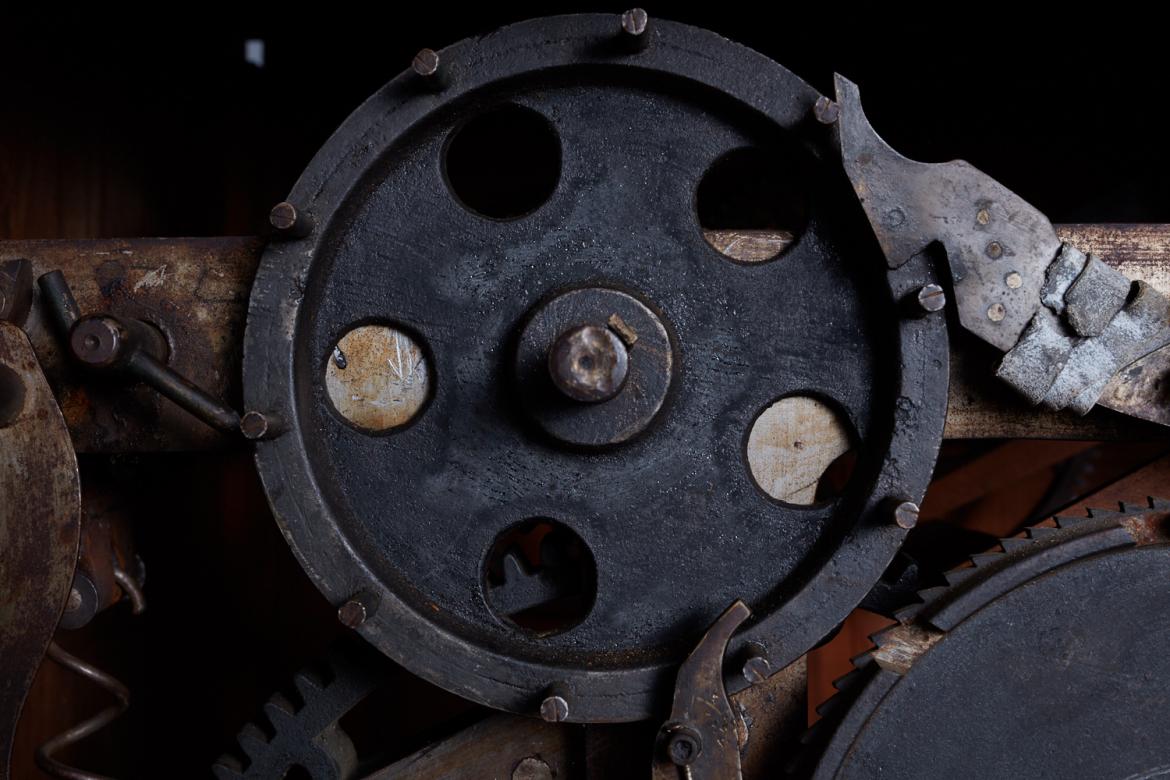 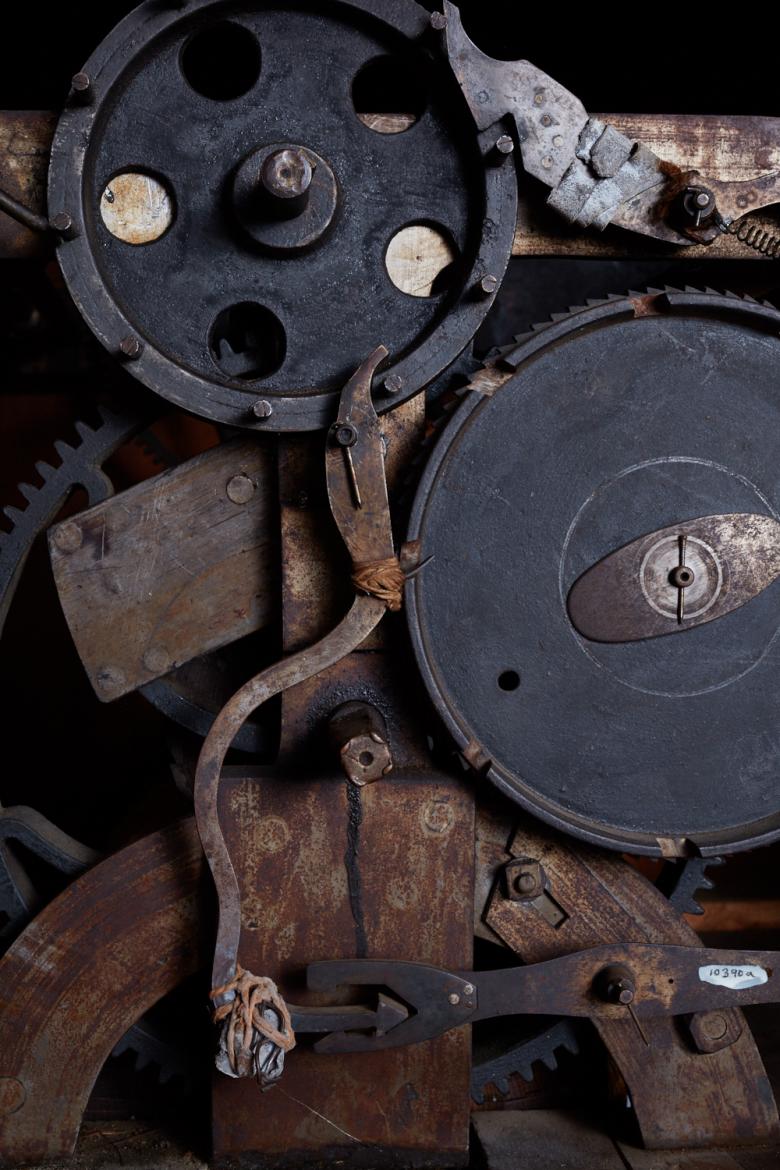 Clock works (a) of iron and steel, rope weight suspension wound on an oak drum. Stand of oak and housing (b) of white pine, brass hinged door with glass panel, iron or steel bolts and nuts. Cast brass locomotive bell (c), no clapper, suspended on an iron hanger bracket. There is also a cast brass crank (e) with an integral handle.

The need for machinery to drive various industrial and agricultural businesses coupled with a communal system that allowed for an exchange of knowledge among trades people created an environment that encouraged the creativity of skilled mechanics in Shaker communities. One such man, Granville Merrill (1839-1878), an elder at Sabbathday Lake, made several important mechanical contributions to the community during his relatively short life. In 1858 at age 19, Merrill went to work for the Shakers as a hired man. Ten years later he became a member of the community. During his life as a Shaker, Merrill made the equipment necessary to process poplar trees into woven cloth for fancy boxes, including a small steam engine in the museum's collection. In 1877 he made the tools and forms for the production of cylindrical bent wood measures in metric sizes, making the Shakers the first to regularly manufactures metric measure licensed by the Metric Bureau in Boston. According to Brother Delmer C. Wilson, a member of the Sabbathday Lake community, Merrill fabricated parts and assembled this clock for the community in 1876.[1] The clock was located in the south attic of the brethrens' shop until it was moved to the attic of the boys shop when the brethrens' shop was dismantled. The clock was connected through the wall to a 104 pound locomotive bell from the Portland Locomotive Works, striking on the house and the half hour. A hundred pound weight drove the works from an old tall clock (now missing) that regulated the striking mechanism. Merrill's death at the age of 39 was a tremendous loss to the community. For many years the toll of his clock provided "an hourly reminder of his talent and dedication."[2] Wilson's workshop, the ell on the back side of the boys shop above which the clock had been located, burned on February 21, 1966. [1]NOC 14,676 ms. drawing of Granville Merrill's clock done in 1957 by Delmer Wilson. [2] Wertkin, Gerald C. The Four Seasons of Shaker Life: An Intimate Portrait of the Community at Sabbathday Lake, Maine. New York: Simon and Schuster, Inc., p. 149. 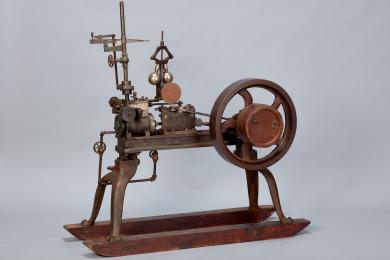