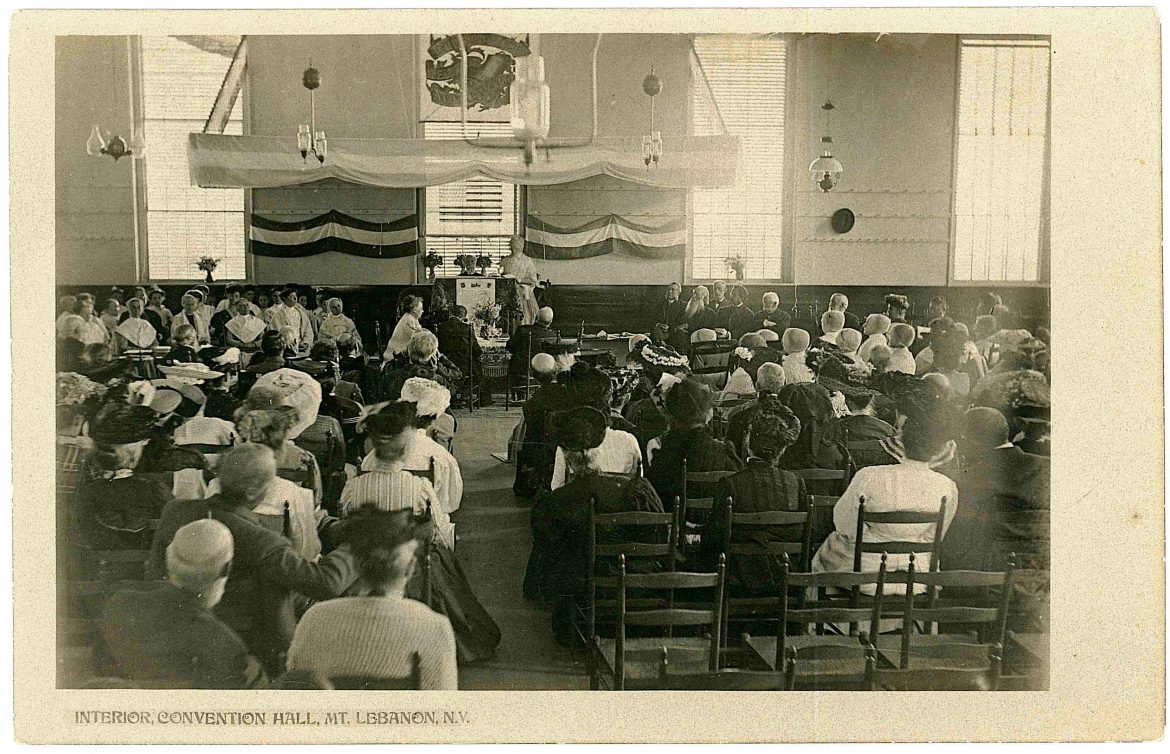 Revisiting the 1905 Peace Convention through postcards

On August 31, 1905, the Shakers at Mount Lebanon hosted an international peace convention in their Meetinghouse. For many years the Shakers had been involved in various peace movements in New England, especially the annual gathering supported by the Universal Peace Union at Salt Point, New York. The 1905 meeting focused on three major points: […]

On August 31, 1905, the Shakers at Mount Lebanon hosted an international peace convention in their Meetinghouse. For many years the Shakers had been involved in various peace movements in New England, especially the annual gathering supported by the Universal Peace Union at Salt Point, New York.

The 1905 meeting focused on three major points: First – Arbitration over Armed Conflict; Second – Reduction in Armaments to Reduce the Financial Burden on the Working Classes; and Third – Securing Waterways of Commerce as Neutral Zones. Among the speakers were religious leaders, legal minds, members of the Fourth Estate, and, representing the Shakers, Eldress Anna White of the North Family. The convention coincidentally occurred just at the end of the Russo-Japanese War, which gave those in attendance ample opportunity to praise President Theodore Roosevelt for his work to end that war. A telegram of appreciation was sent to the president from the delegates.

The Shakers’ convention is well documented by newspaper articles, broadsides, and a few postcards. The best known image of the convention is of the afternoon session in the sanctuary of the Meetinghouse. It is titled, Interior, Convention Hall, Mt. Lebanon, N. Y. Another image shows carriages assembled in front of the Meetinghouse with people milling around either waiting to enter or having just exited the building. It is titled During Peace Convention, Mt. Lebanon, N. Y.

The Museum recently acquired a third postcard produced at the time of the peace convention. This card lacks a caption but clearly shows the interior of the Meetinghouse during the convention.

Why was this third image not captioned? Examining the back side of the two captioned postcards it appears were probably printed at the same time. The backs of the three cards are not divided in half as are modern postcards. Until 1907 the U. S. Postal Service allowed only the recipient’s address to be written on the back of a card; messages were scrawled on the front, in white space left by the photographer or over the image. After 1907, postcard backs were divided – the address written on the right side of the back with the left side available for a message. The backs of all three postcards have stamp blocks in their upper right-hand corners indicating the amount of postage required and where to place the stamp. The two captioned postcards have a stamp block with a depiction of a sailing ship while the third postcard has a stamp block showing a hand with an “X” on it. Blank postcards would probably have been purchased in bulk by photographers, so it is likely the uncaptioned postcard was produced at a different time than the two more commonly seen captioned cards.

The Shakers themselves vetted the images that were going to be printed as postcards, and it’s possible that since the captioned image shows only a few empty seats in the sanctuary and the uncaptioned card shows many more, the Shakers opted for the image that made the convention appear better attended. The photographer may have hated to waste a perfectly good image, and later decided there was some money to be made by printing the uncaptioned image.

Although the photographer is not identified for certain, it is possible these images were created by James E. West, an itinerant photographer living in Hoosick Falls, New York. West took photographs at both the North and Church Families at Mount Lebanon in the early 1900s and would likely have known about the opportunity to photograph the convention or even have been asked to do so.

The photographer would have had time throughout the day to take more images, and there are two other photographs that were turned into postcards that were possibly created on the same day. The first of these shows a crowd arriving or departing the Meetinghouse. This time both horse-drawn vehicles and automobiles are included in the photograph. The cars seem to be carefully parked so as to not be too close to the horses – after all, it was a period when the two modes of transport were learning to coexist. The second of these postcards appears to be the glamour shot. It shows the back side of the Meetinghouse and the drive sheds used for the Lebanon Ministry’s vehicles and those of visiting ministry members, reflected in the Tannery Mill Pond. Whether these last two photographs were created during the Peace Convention is not known, but they certainly date to a time very close to that event and were taken in the same area the convention was being held. Because of these five images, viewers today have a fine sense of the place and time of the Peace Convention.