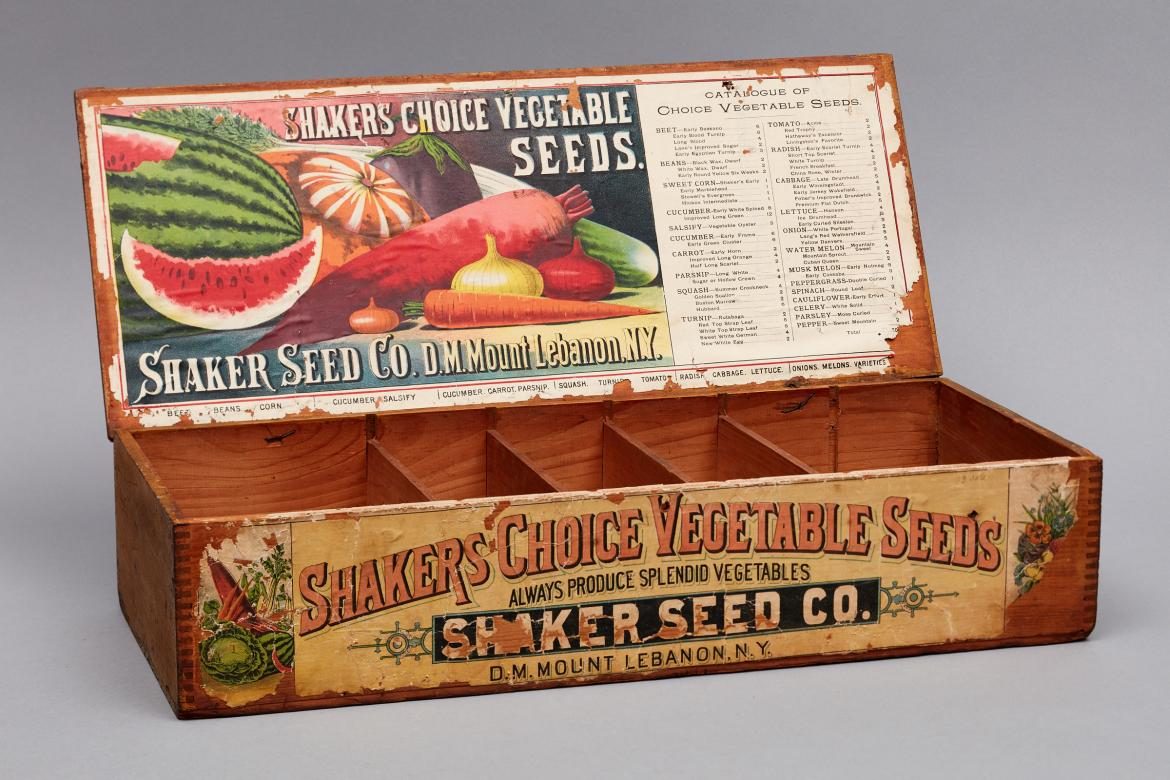 If you’re a gardener, hopefully your vegetables are growing vigorously and starting to produce. Perhaps you bought your seeds from the local Agway, or ordered them online, or saved them from last year’s harvest. Through the first three-quarters of the nineteenth century, many gardeners throughout the Northeast would have purchased their seeds from the Shakers […]

If you’re a gardener, hopefully your vegetables are growing vigorously and starting to produce. Perhaps you bought your seeds from the local Agway, or ordered them online, or saved them from last year’s harvest. Through the first three-quarters of the nineteenth century, many gardeners throughout the Northeast would have purchased their seeds from the Shakers at Mount Lebanon via their local stores. The seed business was an important source of income for many Shaker communities. At Mount Lebanon alone, four of the families were engaged in the business – the North, Church, Second, and East families all raised and sold seeds – often overlapping in time and distribution routes.

Seeds grown in the summer were processed and packaged for sale in the fall and early winter. They were distributed for sale in the late winter when sufficient snow made travel by sleigh possible. Shaker brothers, traveling established seed routes, left boxes of packaged seeds with merchants along the route with the understanding that they would return in the late summer or fall to retrieve unsold seeds and some negotiated share of the money realized from their sale. The process of preparing these seed boxes for distribution was a daunting task every year. In the 1840s, at Mount Lebanon’s North Family, Brother Charles Sizer was the garden deacon. (There was a division of labor between the “gardeners” who raised garden seeds and “farmers” who raised crops – wheat, barley, rye, hay, potatoes, asparagus; etc. – to feed the Shakers and their livestock. Some of the crops raised for seed were also consumed by people and animals.) During the spring, summer, and fall, he was responsible for directing other gardeners in preparing the seed gardens, and planting, cultivating, harvesting, and processing seeds ready for packaging. At the North Family, the Seed Shop was located on the second floor of the Brick Shop – built in 1829 to house brothers’ industries and the family’s communal laundry. Brother Charles left a detailed account of the process of readying seeds for market that provides some useful insight into the process of preparing seeds for sale and the quantity of seeds produced by this one family.

Once seeds were processed, that is, prepared for planting the following spring, they were brought into the Seed Shop and they were stored in bulk bins. Seed boxes, retrieved from the previous spring’s seed routes, had any unsold seeds removed and were “looked over” to see if they could still be used the next year. The boxes were cleaned and washed and set aside to be refilled. Occasionally, new seed boxes needed to be made. For example, on October 2, 1849, Brother Levi Shaw, “made 20 new seed boxes.” In addition to seeds and seed boxes, paper had to be procured to make into seed “papers” – the envelopes in which the seeds would be packaged, and on which “show bills” – the listing of seeds pasted inside the lid of the seed boxes were printed. The North Family procured this paper in the 1840s from the paper mills in Dalton or Lee, Massachusetts. On November 22, 1844, “Charles Bushnell started for Lee … to get some Paper for making Seed Bags. He took some Brooms and cloth to exchange for paper.” [10358] Unable to find suitable paper there, the next week it was noted that, “Charles Sizer has been over to Dalton after paper for making Seed Bags.” Once paper was in hand, it was cut to size. At this time the North Family made seven different sizes of seed bags. A listing on January 3, 1844 in the “Garden Journal” identifies these cut for the 1844 crop:

The bags were cut to the proper size with a special chisel that left the blank bag shaped in such a way that, once folded in half,  flaps were left off three sides of the bag. The two side flaps were pasted over to make an envelope with one open side. It is clear, by his order of recorded work, that Brother Charles Sizer cut the bags and then printed them. Each of these seven sizes of bags cut by Brother Charles probably had a number of different kinds of seeds packaged in them – identified by the printing on the bag, not the size of the bag. On March 27, 1845, Brother “Charles Sizer has finished Printing Seed Bags” for the 1845 crop. To show the quantity and variety of seeds produced in 1845 two lists are combined below – a listing of the number of seed bags printed for each variety of seed and the quantity of those seed processed for sale:

In addition to those listed above, the North Family also produced 36 pounds of Saffron seed, 47 pounds of Cluster Cucumber seed, and 177 pounds of Long White Parsnip seed. Bags for which there is no weight may have been failed crops, filled with seeds raised by other families, or just a change of plans.

Once the bags were printed, the gardeners working in the Seed Shop would fill each bag and seal the remaining flap shut. Bags were then placed in compartmented seed boxes, the printed show bills were written out for the quantity of each variety included in the box and pasted on the inside of the lid. On October 30, 1845 all of this work came together as the brothers, “Finished making out the bills and pasted the Labels on the boxes for the Northern & Western routes. Clawson Middleton nailed the boxes & made out some of the bills. Found that we had not bills enough. Lewis Theal went to the Church & borrowed some.”

At this point all that was left to do was to load their sleighs (or wagons, if it looked as though there would be no snow) and make the peddling trips on the Northern, Western, Southern, New York City, Hartford (NY), and Honesdale (PA) routes.

As spring is here, and people seem to have more time this year than usual to plant gardens, it is good to remember that the same process of planting, cultivating, harvesting, processing, packaging, and distributing seed still goes on. This year, for the first time in a while, the Shaker Society at Sabbathday Lake, Maine, grew Giant Russian Mammoth Sunflower Seeds and put them up in papers for sale.

One response to “The Shaker Garden Seed Business”