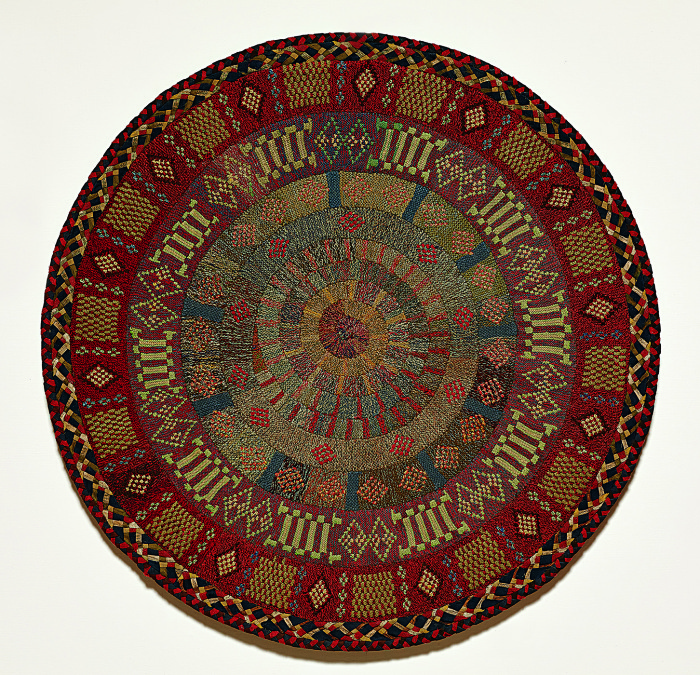 The knit rugs of Elvira Hulett

A small group of rugs, similar in their style of manufacture and aesthetic features, are associated with Elvira Hulett, a Shaker Sister who lived her life at Hancock, Massachusetts. Elvira Curtis Hulett was born on August 6, 1805 – thirty one years to the day from when the Shakers first set foot in New York City. […]

A small group of rugs, similar in their style of manufacture and aesthetic features, are associated with Elvira Hulett, a Shaker Sister who lived her life at Hancock, Massachusetts.

Elvira Curtis Hulett was born on August 6, 1805 – thirty one years to the day from when the Shakers first set foot in New York City. She was born in Williamsburg, Massachusetts, an abutting town to Northampton. She was apparently the second born in a family of three boys and two girls. Her parents were Anthony Hulett and Charlotte Curtis Hulett. Something happened in the Hulett family following the birth of their fifth child – Theodore Graves Hulett on June 13, 1811 – for in 1812 all the family but Elvira’s father came to live with the Shakers at Hancock.

Sister Elvira lived a long and useful life among the Hancock Shakers. She resided with Hancock’s West Family for nearly a half century, moving into the Church Family where she worked as a weaver, baker, tailoress, and eventually the Eldress of the family. Her mother, Charlotte, died in the faith as did her brother Chester, who served as a trustee at the West Family. The other three children, Charlotta (called Hortency in her Shaker life), Walter, and Theodore all apparently left in their youth.

Of the five rugs that are associated with Sister Elvira, only one is signed by the maker – that one, now in a private collection, bears a cross-stitched label that reads, “Made in 1892 by Sister Elvira in her 88th year.” The only Elvira this could be among the Shakers was Elvira Hulett. One of the five known rugs was sold at the Ralph O. Esmerian sale at Sotheby’s in late January, 2014. The remaining three rugs are in the collection of Shaker Museum | Mount Lebanon. They were all acquired at Hancock from Sister Mary Frances Dahm in 1957. They are all round, ranging in diameter from 44 1/4 inches to 56 3/4 inches. They are all knit with a spiraling center several rotations wide surrounded by concentric circles of knit strips. The rugs are bound in a traditional three-strand braid to protect the outer edge of the knitting. All three are backed with heavy denim that helps them to lay flat.

A fourth rug in the Museum’s collection, pictured above, needs to be further studied as possibly associated with Sister Elvira. This rug, a traditional hooked rug (the hooking probably not the work of Sister Elvira) has a knit border applied to it with a typical braided boarder protecting its outer edge. It, like the three round knitted rugs, was acquired from Sister Mary Dahm at Hancock in 1957. The style of the knitting, the braided border, and the patterns used are so much like the other work of Sister Elvira that it seems that this rug should be added to this Sister’s portfolio. All of the rugs associated with Sister Elvira appear to have been made in the late 1880s and early 1890s, a period when the Shakers had relaxed the prohibition of unnecessary ornament in their household furnishings.

In the late summer of 1882, Elvira traveled from Pittsfield, Massachusetts, with a couple, Mr. and Mrs. Ira Race, who were not Shakers (although it may have been her sister Hortency and her husband), to Niagara County, New York, to visit Elvira’s natural brother, Theodore Hulett. It was Sister Elvira’s first trip outside Massachusetts. She visited Niagara Falls.

Her brother Theodore was an interesting character. His biographies in various histories of Niagara County tell that at twelve years of age he left home and apprenticed himself to a carriage maker in Pittsfield, Massachusetts. His days as a Shaker youth are not mentioned. As an apprentice he is said to have studied law in his free time and by 1834 made his way to Niagara Falls. There he began several careers – one as a construction manager and the other in the legal field. He was superintendent of construction for the first suspension bridge to cross the Niagara River connecting the United States and Canada. To get the first cable across the river Hulett suggested that a contest be held to see who could fly a kite across to the other side. Once the winning string was tied to a tree, heavier and heavier strings, ropes, and cables could be pulled across the gorge eventually leading to the establishment of a cable capable of holding an iron basket that he and the bridge’s engineer, Charles Elett, Jr. of Philadelphia, had devised to transport workers from one side to the other. He was so confident in the safety of the basket that he sent his own daughter Elvira (clearly named for his older sister) across on its maiden voyage – “never imagining for a moment the possibility that it could tumble down into the gorge taking little Elvira to a most violent death.” Fortunately, she arrived safely on the other side becoming the first woman to be carried across the Niagara gorge in a basket. Elvira Hulett Gates lived in Warsaw, New York, dying there at age 85 in 1927.

These two members of the Hulett family from apparently difficult and challenging beginnings, both had success in finding their way to positions of leadership in their different communities and in expressing their creative prowess in ways that we can still appreciate and even marvel at today.