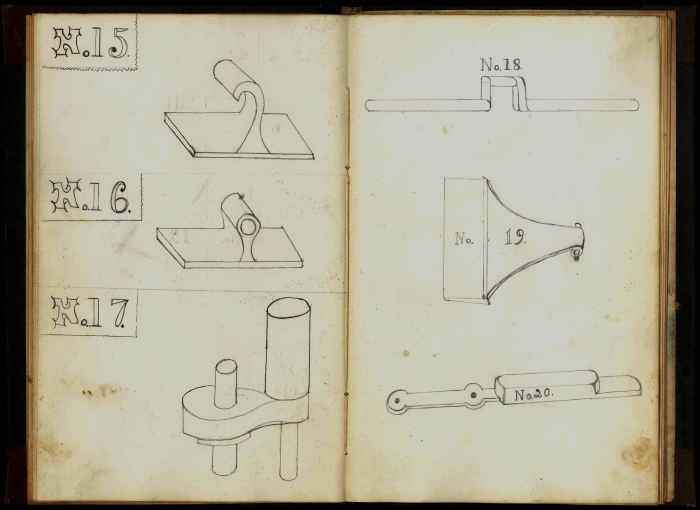 A perfect confluence of need, will, skill, and capital made it possible for the Shakers to make innovative improvements in the machinery for doing their laundry. The challenge of keeping a communal family of 50 to 100 members in clean clothes and linens clearly created a need for mechanization, and the Shaker communal system of cooperative work […]

Washing Machine, Church Family, Canterbury, New Hampshire, ca. 1877. Photograph by Lees’ Studio, Chatham, New York, Shaker Museum | Mount Lebanon, 1955.7843.1. This is the washing machine acquired from and once used by the Canterbury Shakers at their laundry in 1955 as it was exhibited at the Shaker Museum around 1960.

A perfect confluence of need, will, skill, and capital made it possible for the Shakers to make innovative improvements in the machinery for doing their laundry. The challenge of keeping a communal family of 50 to 100 members in clean clothes and linens clearly created a need for mechanization, and the Shaker communal system of cooperative work made available the different trades necessary to build something as complicated as a wash-mill. The mechanics, woodworkers, blacksmiths, and machinists in the community could build complex machines and in precept and practice were trained to work together. The Shakers had built wash-mills of different types during the early part of the nineteenth century, but in 1858 they took what they had learned about doing wash with mechanical power to the marketplace by engineering, building, and patenting an improvement in washing machines. Although the Shakers received a patent for an “Improved Washing Machine” on January 26, 1858, they had been manufacturing and selling the machine prior to that and mentioned the success of the machine in the patent description.

The washing machine appears to have been developed at Mount Lebanon in the early 1850s. Nicholas Bennett, a Shaker mechanic at Mount Lebanon, probably developed and began manufacturing the machine, but when he died at the end of 1857 the Shakers thought it best to assign the patent to Brother David Parker, a Trustee in the Church Family at Canterbury. It was the Canterbury Shakers who manufactured and marketed the washing machine.

In the introduction to their 1862 catalogue for the Shakers’ Washing Machine they summarized their experience in the laundry business: “The Societies of Shakers have had much and long experience in the attempt to wash clothes by power machines, and, after trying several different kinds, have never found any that give such general satisfaction as this machine.” In presenting their new improved machine they also took into account the problems that doing laundry by mechanical means have caused. They wrote, “We are fully aware of the great imposition which has been practiced by the introduction of washing machines, and of the injury to clothes, loss, disappointment, and waste of soap resulting there from, having been ourselves sufferers with others; hence the greater necessity of carefully examining into this all-important subject. Although subjected to some disadvantages in starting this machine, against the feelings and prejudices of washerwomen, who, as a general rule, are opposed to any labor-saving machinery, yet, so far as we know and believe, every machine now in operation gives great satisfaction, as the accompanying Testimonials will bear witness.”

In 1860, the Scientific American devoted a front page article to the Shakers’ machine along with an illustration of it in use and a list of hotels using it with satisfaction.

By 1876 when the Canterbury Shakers exhibited the washing machine in Machinery Hall at the Centennial Exposition in Philadelphia, they had sold over three hundred machines and had made further improvements in its operation. The wash tubs in the original machine were agitated by swinging from rods much like a porch swing but on the improved machine shown at the Exposition the tubs slid back and forth on metal tracks. In both machines the agitating power was supplied by a water-powered crank-shaft connected to the tubs by a reciprocating arm. The washing machine could be operated by water or steam power by way of a drive pulley and line-shaft powered by either source. Dirt was removed by the repeated compression of clothes against the washer’s wall and the churning movement provided by the agitators.

There are a number of documents and artifacts in the Shaker Museum | Mount Lebanon collection associated with the Shakers’ manufacturing and marketing of the washing machine. In addition to a three-tub version of the 1877 machine and the original Letters Patent for 1858 and 1877 machines, there is a small manuscript book that contains drawings of the parts for the machine that had to be cast at an iron foundry, and many of the original printing blocks that were used to promote the machine in the press and catalogues.

Learn more about Shaker laundry at the summer exhibition Wash: There is no dirt in heaven on view at Mount Lebanon through October 10, 2016.