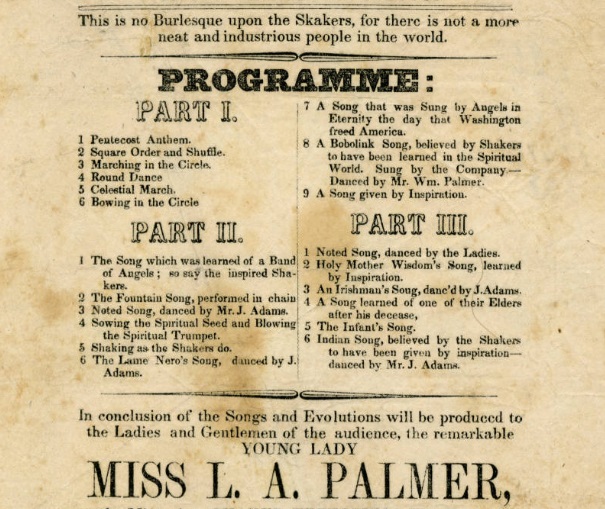 ‘Tis a gift to be simple, but things aren’t as simple as they seem

The Shaker song, “Simple Gifts,” was not widely known before American composer Aaron Copeland used the tune to score choreographer Martha Graham’s 1944 ballet Appalachian Spring. The song, however, was certainly popular among the Shakers – having been recorded in at least 15 surviving manuscript hymnals according to Daniel Patterson’s book, The Shaker Spiritual. The song, […]

The Shaker song, “Simple Gifts,” was not widely known before American composer Aaron Copeland used the tune to score choreographer Martha Graham’s 1944 ballet Appalachian Spring. The song, however, was certainly popular among the Shakers – having been recorded in at least 15 surviving manuscript hymnals according to Daniel Patterson’s book, The Shaker Spiritual. The song, described by Patterson as a quick dance with a tempo of 106 beats per minute, appears to have been written by Elder Joseph Brackett while he lived at the community at Alfred as a member of the Maine Shaker Ministry.

Recently it has been discovered that the song had, nearly a century earlier, enjoyed some popularity outside the Shaker community. In a November 5, 1851 article published in The New York Daily Times, a person in attendance at a rehearsal of a company of Shakers preparing for a performance in Boston recorded the words to a song beginning, “Tis a gift to be simple; ‘Tis a gift to be free, …”  The entire article appeared as follows:

“AGUE POETRY!—A party of nine Shakers, of both sexes, is preparing to “come out” at Boston in a series of public entertainments, for the avowed purpose of drawing attention to the peculiarities of their sect, and thus making proselytes. They purpose giving representations of Shaker ceremonies and to sing the songs and hymns of their order. A friend who attended one of their rehearsals not long since speaks of their music as entirely original. The Company desire securing the services of a small orchestra, and additional attractions in the shape of vocal performers, selected from the world outside “the Church.” The Shaker songs and hymns generally refer to their form of worship, and their ceremonies are intended to be types of the tenets of their faith. Anyone who has witnessed the turning and shaking process, as carried on by this singular sect, will appreciate the following, which is one of the songs about to be sung by the Boston Company, in a sort of light, tripping, jig metre:

‘Tis a gift to come down where we all ought to be;

And when we find ourselves in the place just right,

Twill be in the valley of Love and Delight.

When true simplicity is gained,

To bow and to bend we shall not be ashamed;

To turn and to turn shall be our delight,

Till we turn and in turning we come around right.”

Considering the observer of the rehearsal likely wrote down the words after hearing the song only once, the variation in the exact wording of how the song has come down to the present day can be politely ignored.

The “friend” who attended the rehearsal and/or the author of the article did not understand that there was little chance that these performers were, in fact, at that time, members of the Shaker Church. Rather, it is more likely that the “company” was one of several troupes of Shaker apostates who, after leaving the sect, chose to monetize their experience as Shakers by lecturing about Shaker life and belief and performing their songs and dances.

There were at least four groups of seceders who departed Shaker communities during the 1840s and are known to have taken to the stage. Leaving Canterbury, New Hampshire, in 1844, William Tripture eventually gathered a group of nine ex-Shakers to perform around New England, New York, and beyond. While Tripture and company were performing in the Midwest, another group of Canterbury apostates had taken to the stage in New England and New York.  Lydia A. Chase, once a member of Tripture’s company, was featured as “the miraculous Shaker Tetotum,” able to spin around 1,500 to 2,000 times. From the Maine communities, members of the Hammons family, once Shakers at Alfred, and members of the Palmer family, Shakers at New Gloucester, had also forsaken their Shaker homes for the limelight.

There is no neat explanation as to why any of these companies would have known the words and tune to “Simple Gifts.” They had all left their Shaker homes prior to the generally accepted date of 1848 for Elder Joseph Brackett’s creation of the song. One possible hypothesis is that by the time William and Love Ann Palmer left the New Gloucester Shakers in 1847, Elder Joseph had already sung his song to members of the community. Although “Simple Gifts” is attributed to the Alfred community, Elder Joseph spent most of his Shaker life as a member of either the Gorham Shakers (his youth) or at New Gloucester. He was the Elder at New Gloucester when, in 1848, he was needed to serve in the Ministry. For nearly the next decade he resided primarily at Alfred. He returned to New Gloucester where he died in 1882. Perhaps it was only in 1848 that the song was actually written down.

There is an extant poster for a performance given by the Palmer troupe in E. Meyers Hall in Fairfield County, south-central Ohio, on Friday October 20, 1848. The program promises a lecture by onetime Shaker, Mr. William Palmer, on the history of the Shakers and Mother Ann Lee, an illustrated presentation about the Shaker Bible, and, of course, a selection of Shaker songs and dances – culminating in Miss. L. A. Palmer’s amazing whirling. Most interesting for the subject at hand is the presentation of songs that appears to come from the 1840s during the Shakers’ Era of Manifestations. Such songs reflect the Shakers’ interactions with angels and other visitors from the spirit world. Titles include, “The Song Which Was Learned of a Band of Angels,” “Sowing the Spiritual Seed and Blowing the Spiritual Trumpet,” and “Indian Song, Believed By the Shakers to Have Been Given By Inspiration.” An entry only described as “A Song Given By Inspiration,” gives one pause to wonder if this may have been the yet untitled “Simple Gifts” that the Palmers may have heard at their onetime Shaker home at New Gloucester.

Whatever the process by which “Simple Gifts” became part of public performances outside the Shaker community, the fact that it did bears testimony to both the pleasantly memorable tune and the resonance of the message – keep your life focused, by not allowing extraneous and unnecessary forces distract you.