Wool and silk blend dress with matching bertha, Mount Lebanon, ca. 1890. The fringe trim on the bertha is Victorian in style, but the piece is unmistakably Shaker, especially the bronze shot cloth. 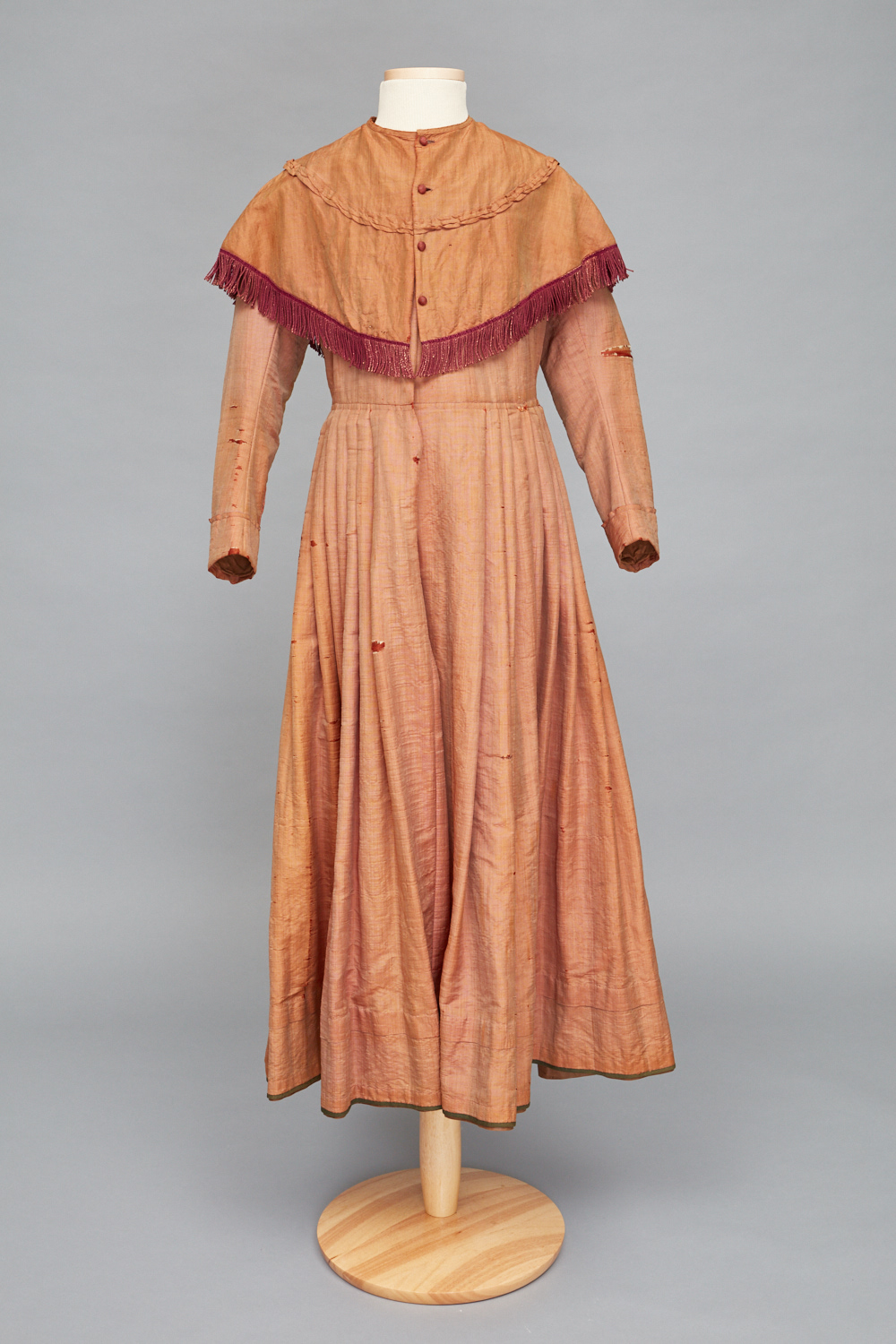 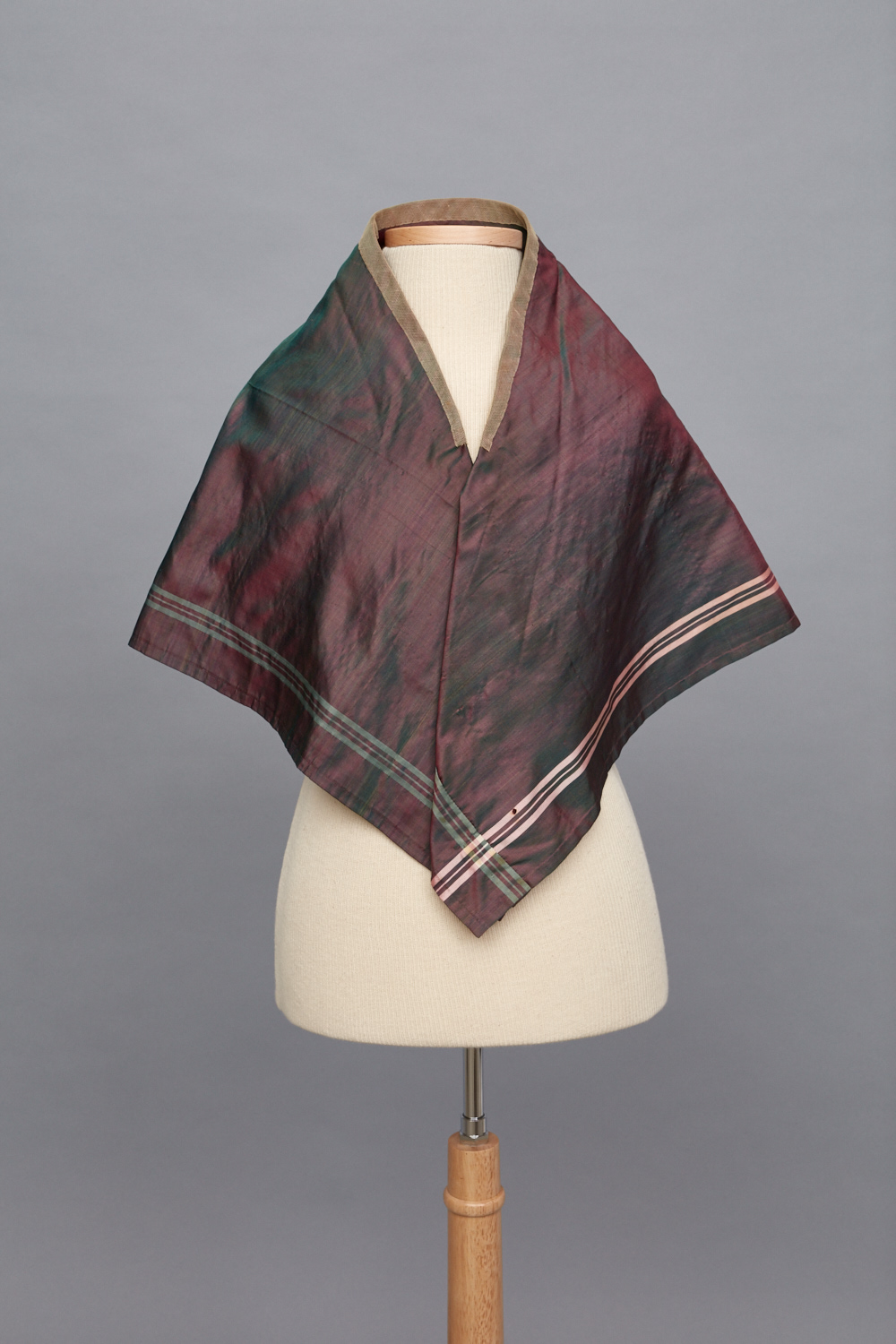 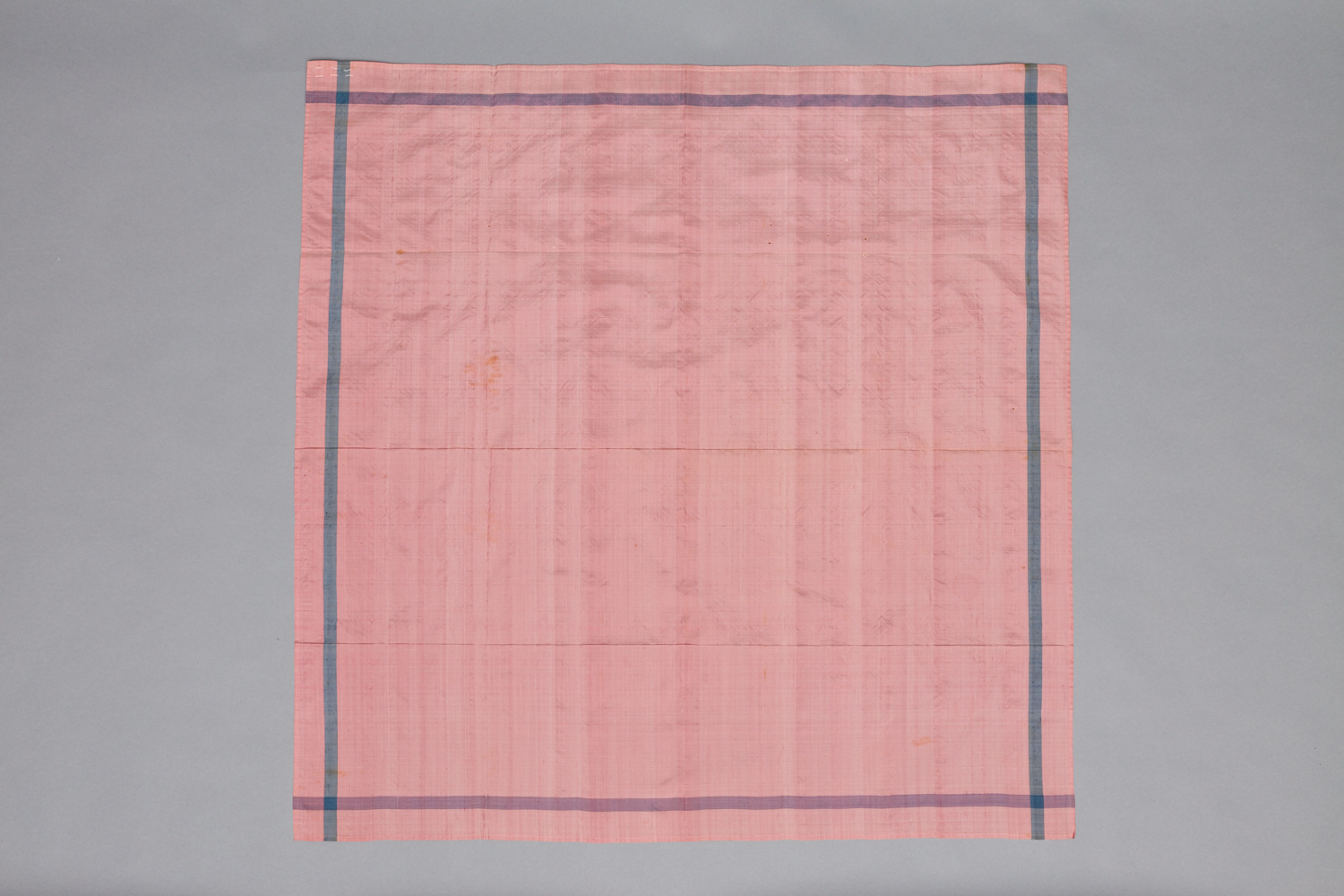 Deep plum neckerchief made of magenta silk woven with blue or black cotton. Acquired from the Canterbury Shakers. 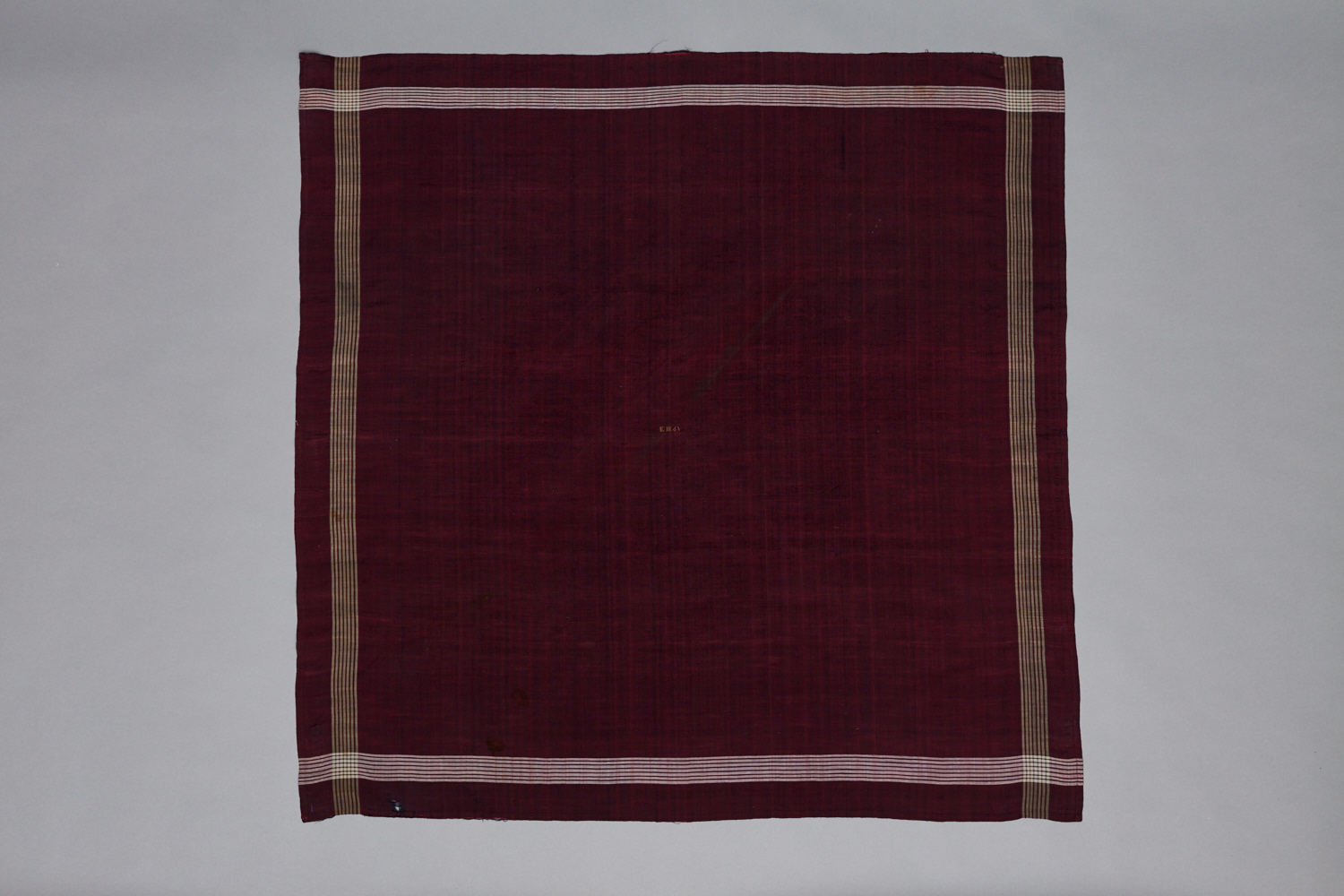 The sleeve on this wool dress is edged with black velvet, a comfortable and seemingly extravagant detail. Note the faceted glass button and bias-cut cuff. 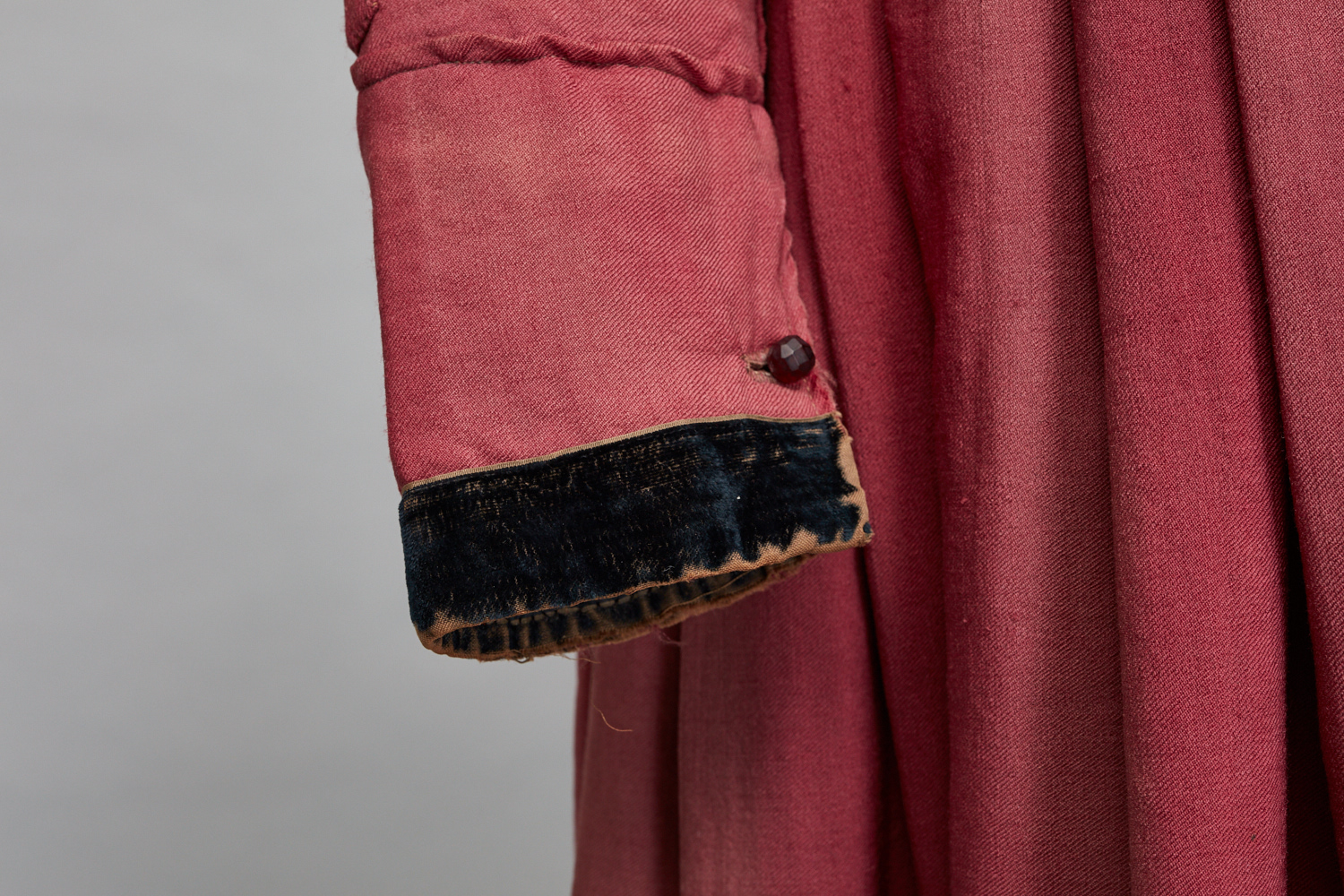 This Mount Lebanon cloak is made of glazed brown worsted lined with glazed green cotton. It predates the more common heavyweight wool and wool flannel cloaks. 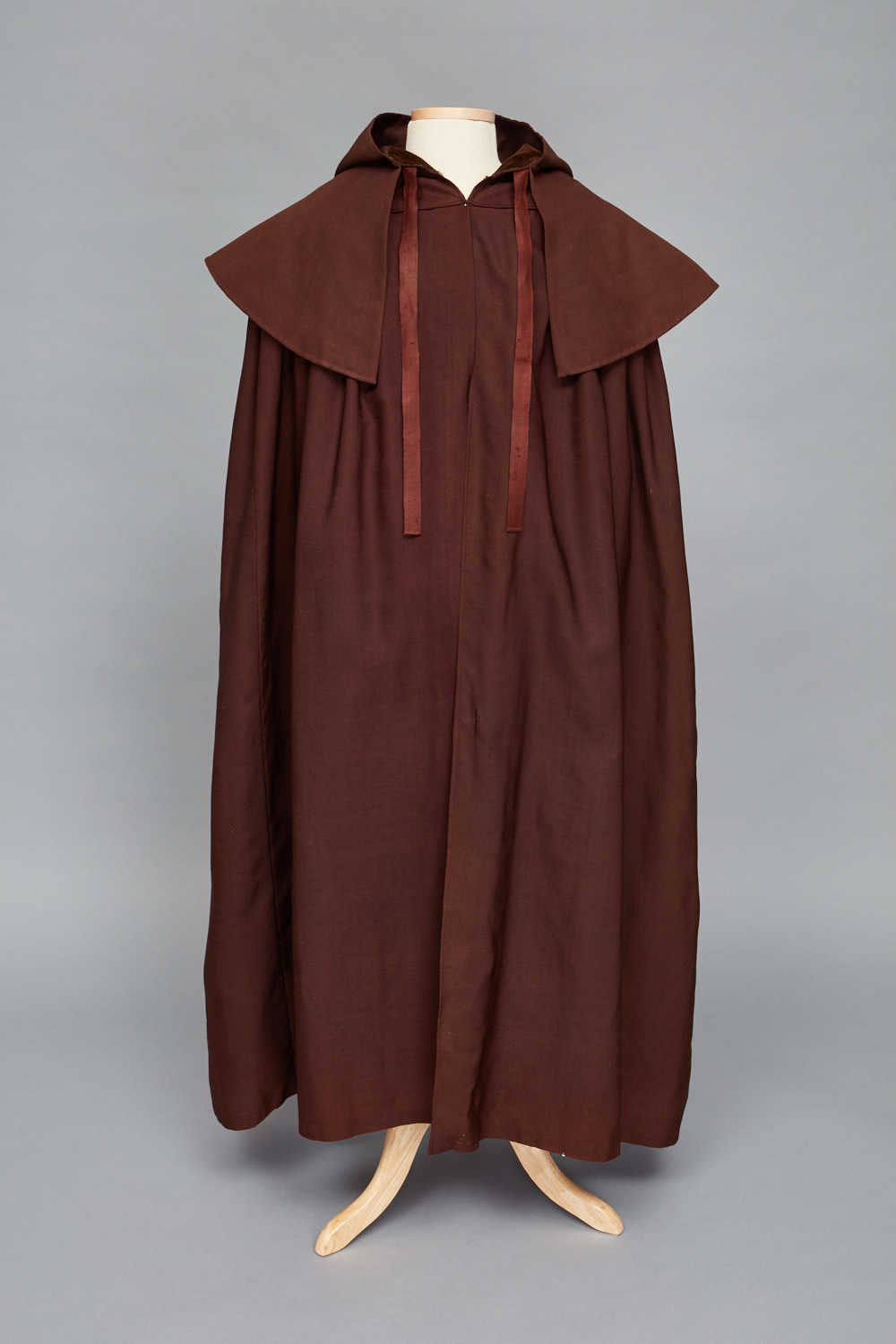 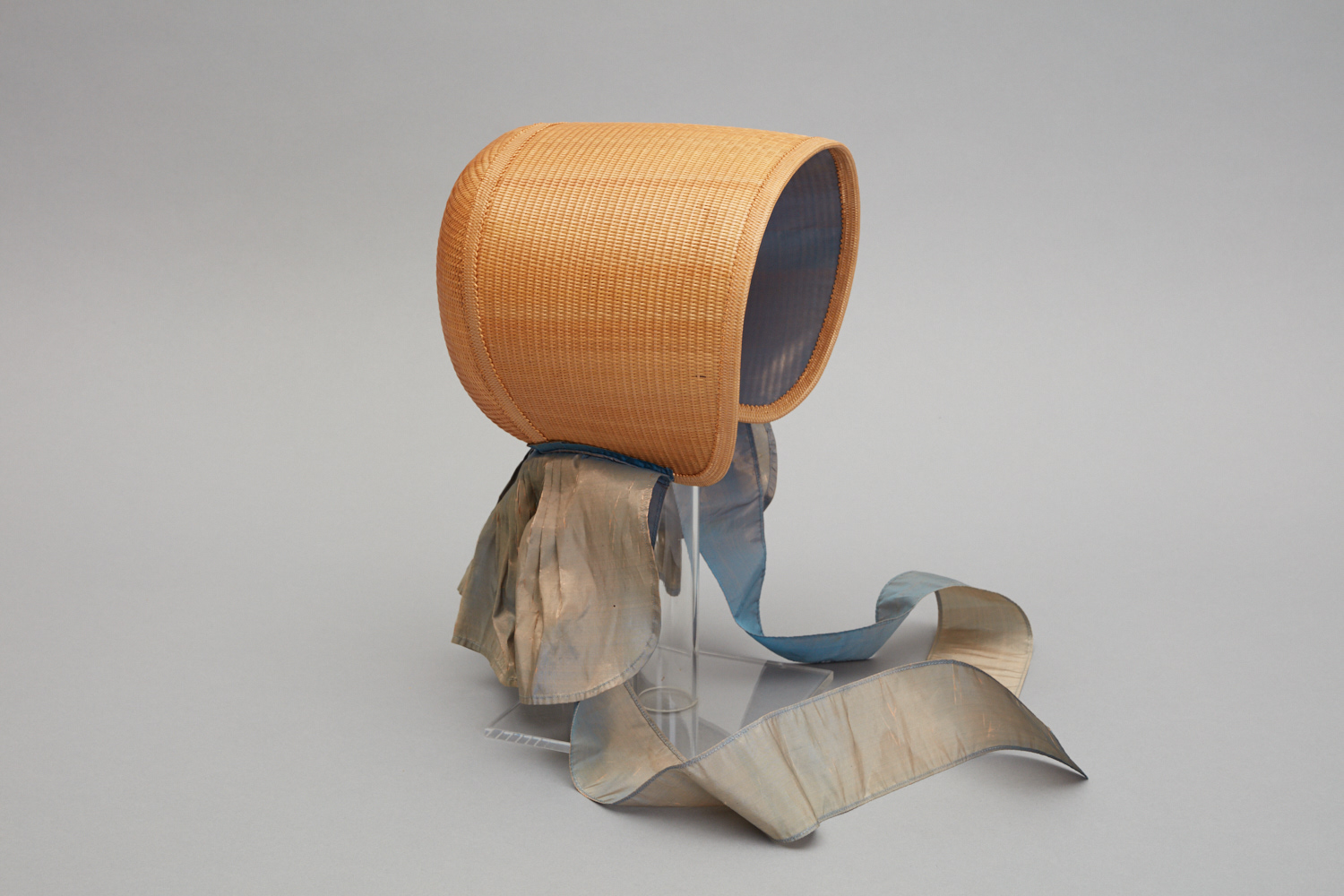 Straw bonnet covered with burgundy red silk and black tulle. The tulle is cut unevenly over the flounce, creating an angled edge. 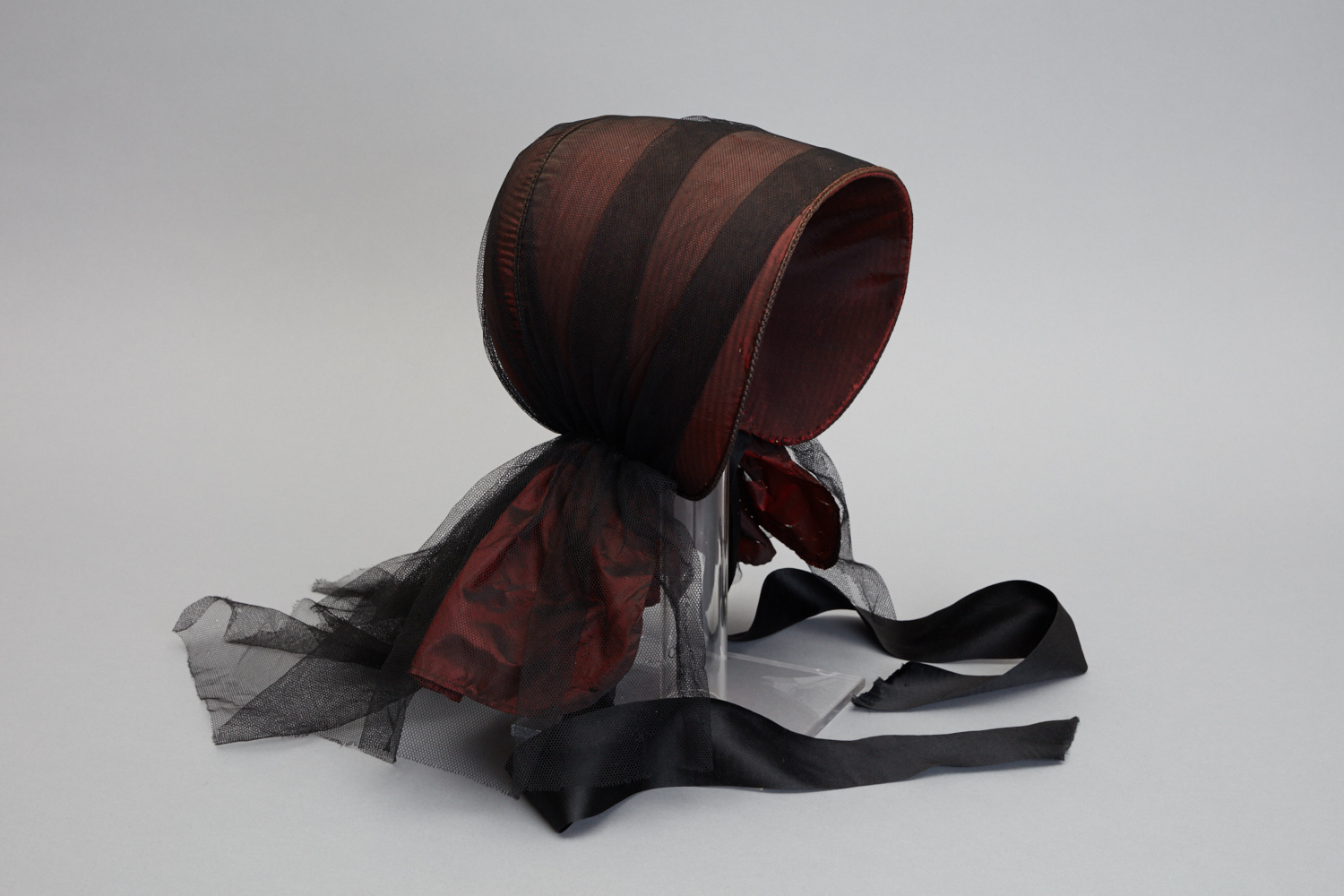 Bertha, Mount Lebanon, ca. 1870-1890. Like many others, this one reflects Victorian fashion with its glass buttons and lace trim. The brown silk shot cloth is comprised of orange and blue thread. 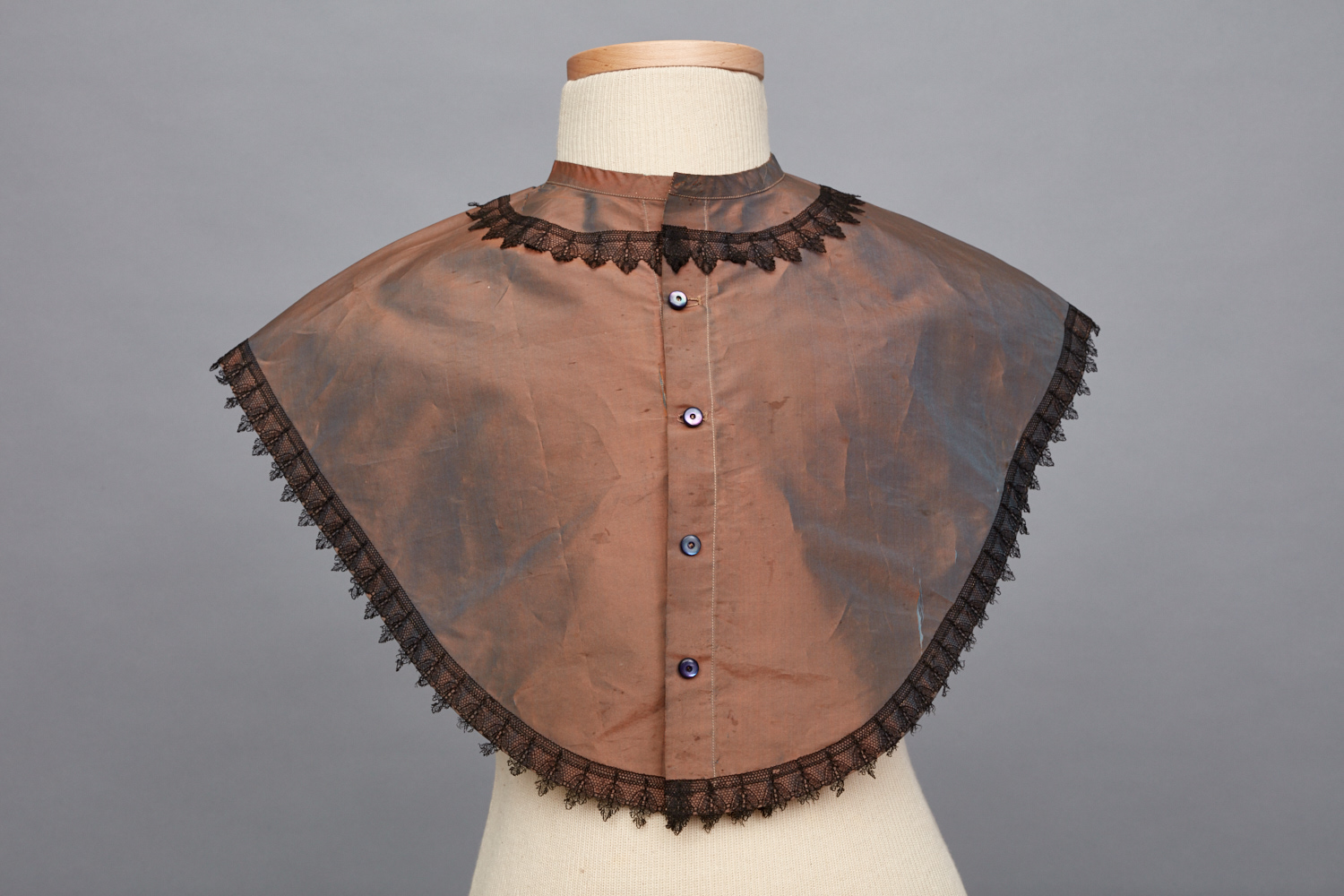 This bertha, acquired from Mount Lebanon, is even more overtly of a worldly style than most, with its brown and black striped taffeta, braid trim, and pointed shape. 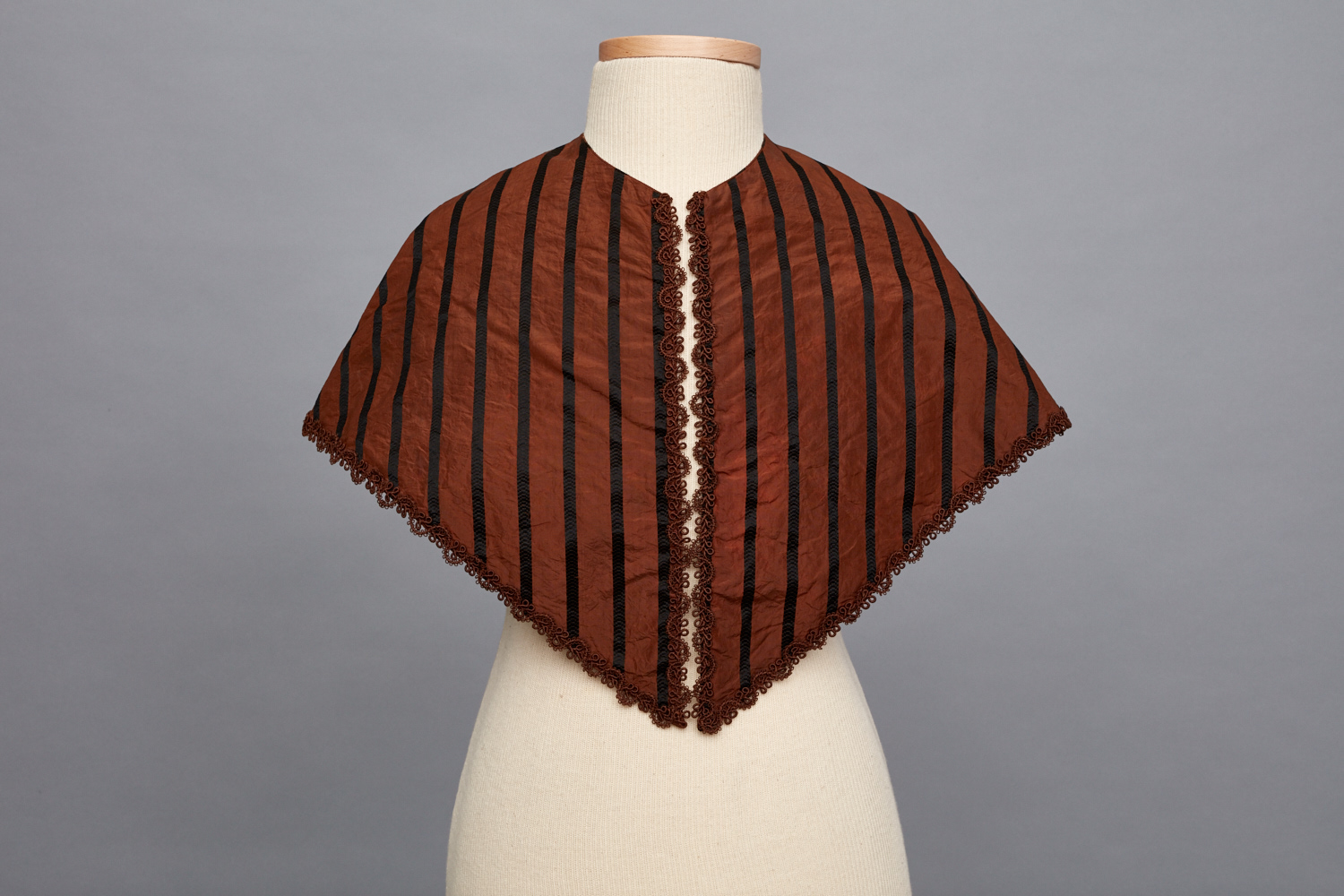 Seven sisters at Watervliet, NY, ca. 1910-1920, Watervliet, NY. By this period sisters had the freedom to choose worldly styles or the more traditional Shaker costume. 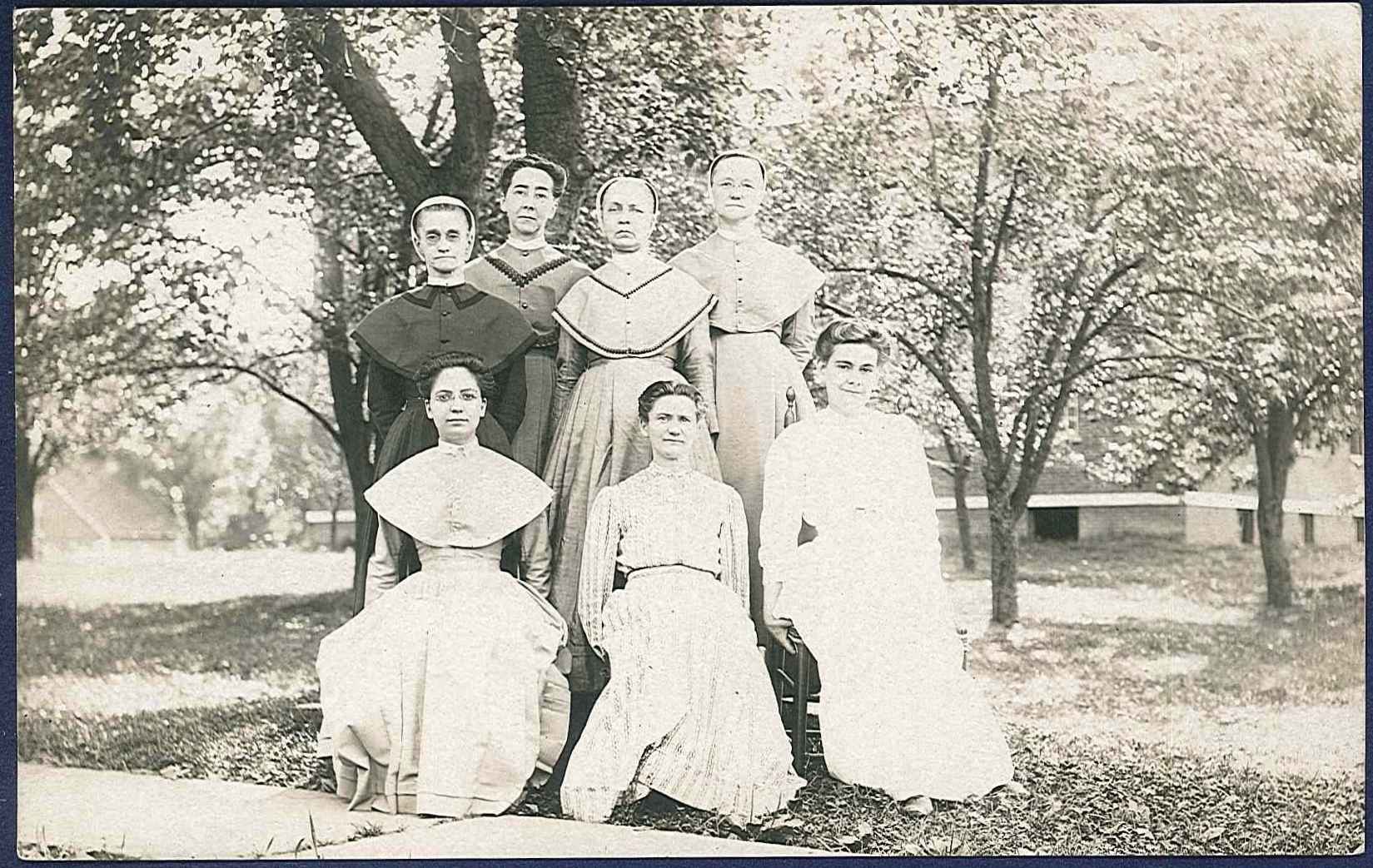 Photograph of Sisters Grace and Mary Dahm, North Family, Mount Lebanon. By mid-20th century, Shaker sisters wore cotton dresses that looked little or no different from those of the world. 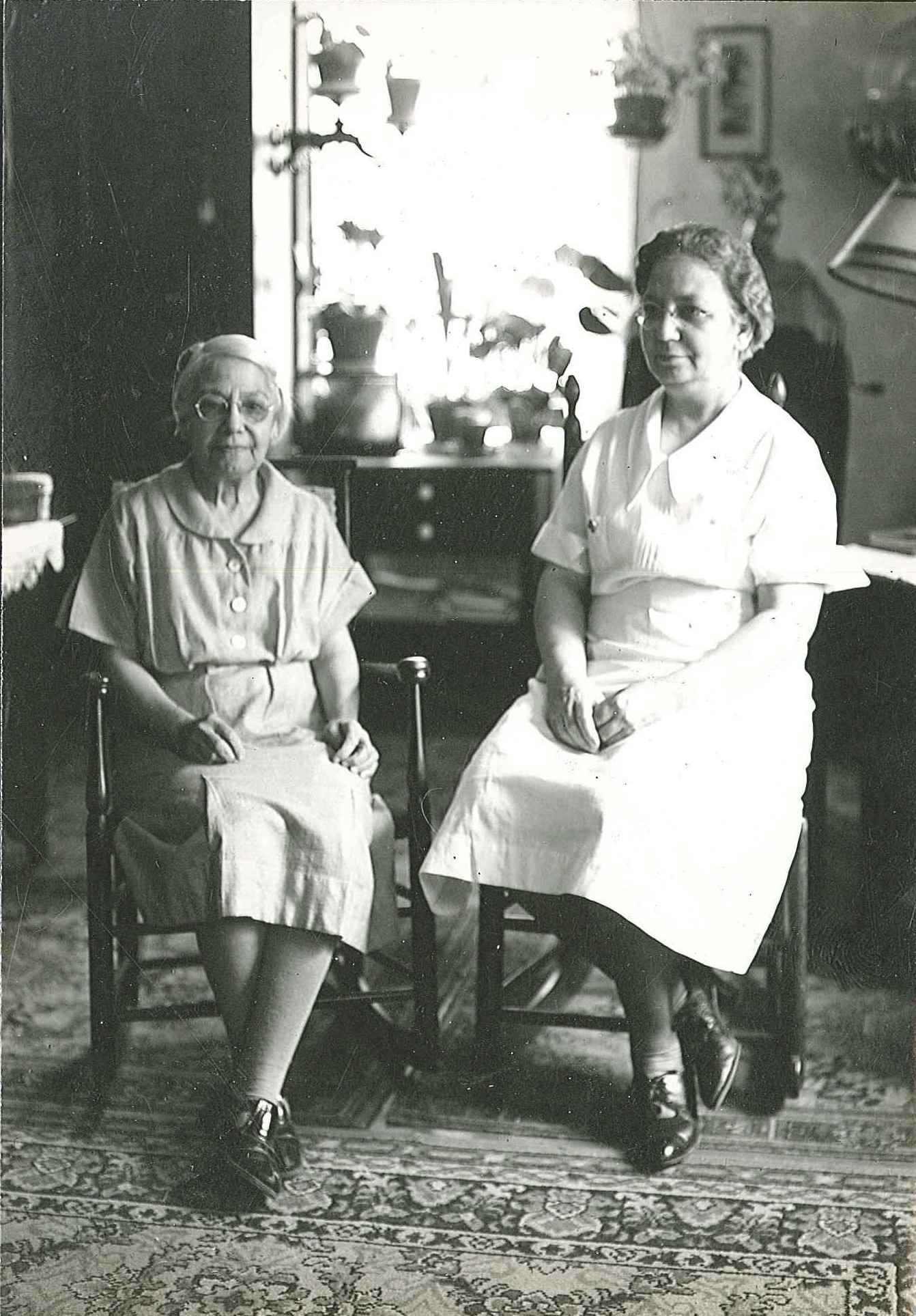 Print cotton dress, ca. 1950. The bertha and long sleeves are characteristically Shaker, though the dress is relatively late in date. 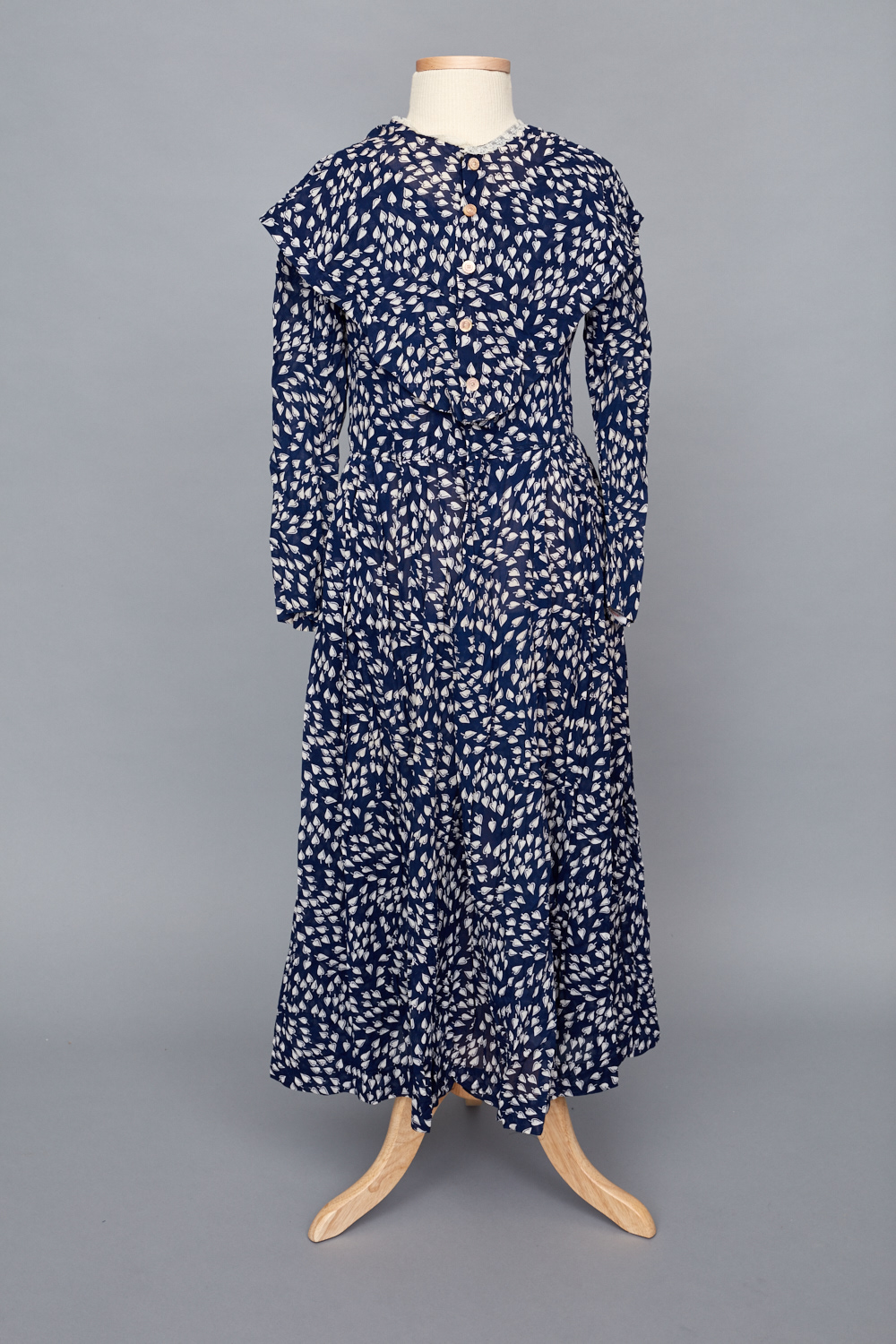 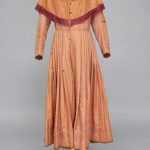 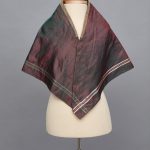 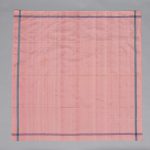 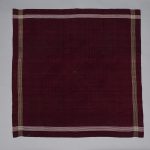 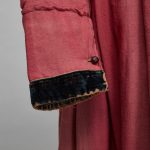 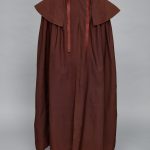 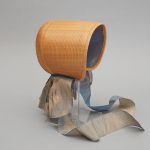 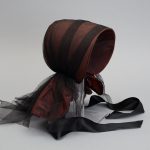 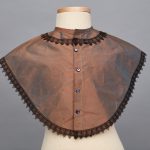 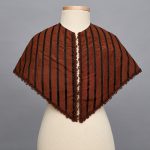 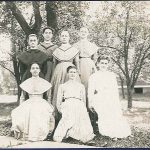 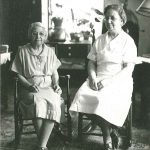 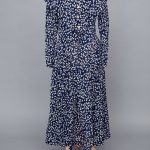 Made for the World

Clothes were never to be a source of vanity, but they were made attractive by the quality of their construction and materials. Shaker recipes for dying fabrics in shades of red, brown, blue, green and purple exist, demonstrating that a broad range of colors were used. The technique of making shot cloth, cross-weaving threads in color combinations such as red and white, red and blue, blue and brown, and other color combinations produce rich, iridescent shades. Decorative elements such as printed or woven patterned fabrics, possibly obtained from dresses brought in by new members that were not suitable for wear, lined the bodice and sleeves of dresses, though they would be seen by none but the sister who wore them. Neckerchiefs worn before about 1840 were typically of blue cotton with white border stripes or patterns; from about 1840 until about 1875 silk neckerchiefs made by the Kentucky Shakers were popular.

Some elements of style decreed by the Ministry or custom were of purely aesthetic value. The integral apron front of skirts, common from about 1810 until the end of the century, served no purpose, as a separate apron was worn by sisters while doing work. In 1855, the Ministry permitted the addition of five pleats on each side of the integral apron purely for the sake of appearance, as it would necessitate the use of more fabric.

In the second half of the 19th century, the rules relaxed considerably, and expressions of individual style and preference became more common. More worldly trim and ornaments were added, and styles evolved to be closer, though not up to date with, the fashion of the time. Skirts became fuller and more deeply pleated; according to Elder Henry Blinn, “To make the skirt set properly a crinoline or very full skirt was worn beneath it,” as was the custom in the world. By the 20th century, Shakers had latitude in clothing choices, and many sisters wore commercial cotton dresses, blouses, and skirts.