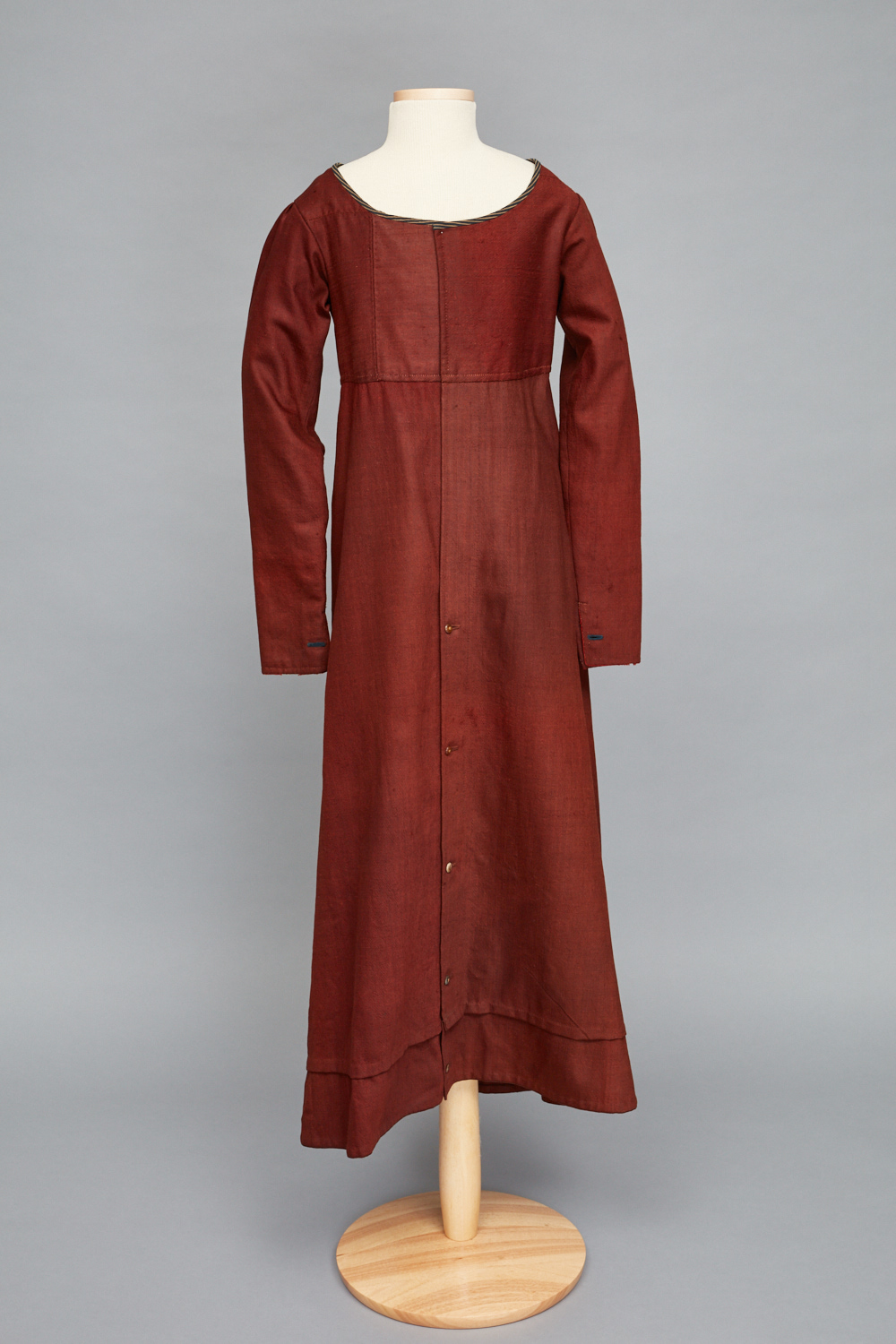 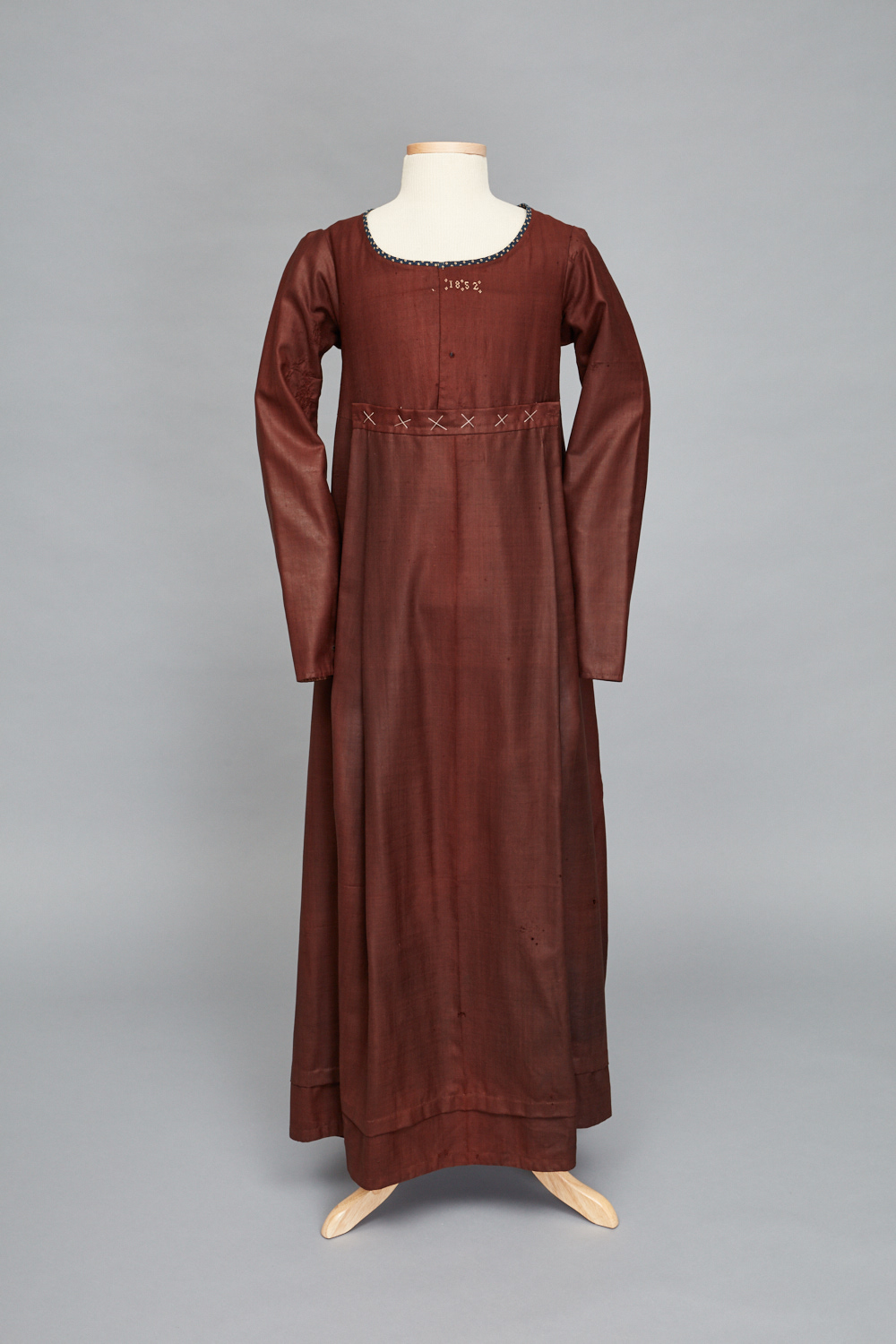 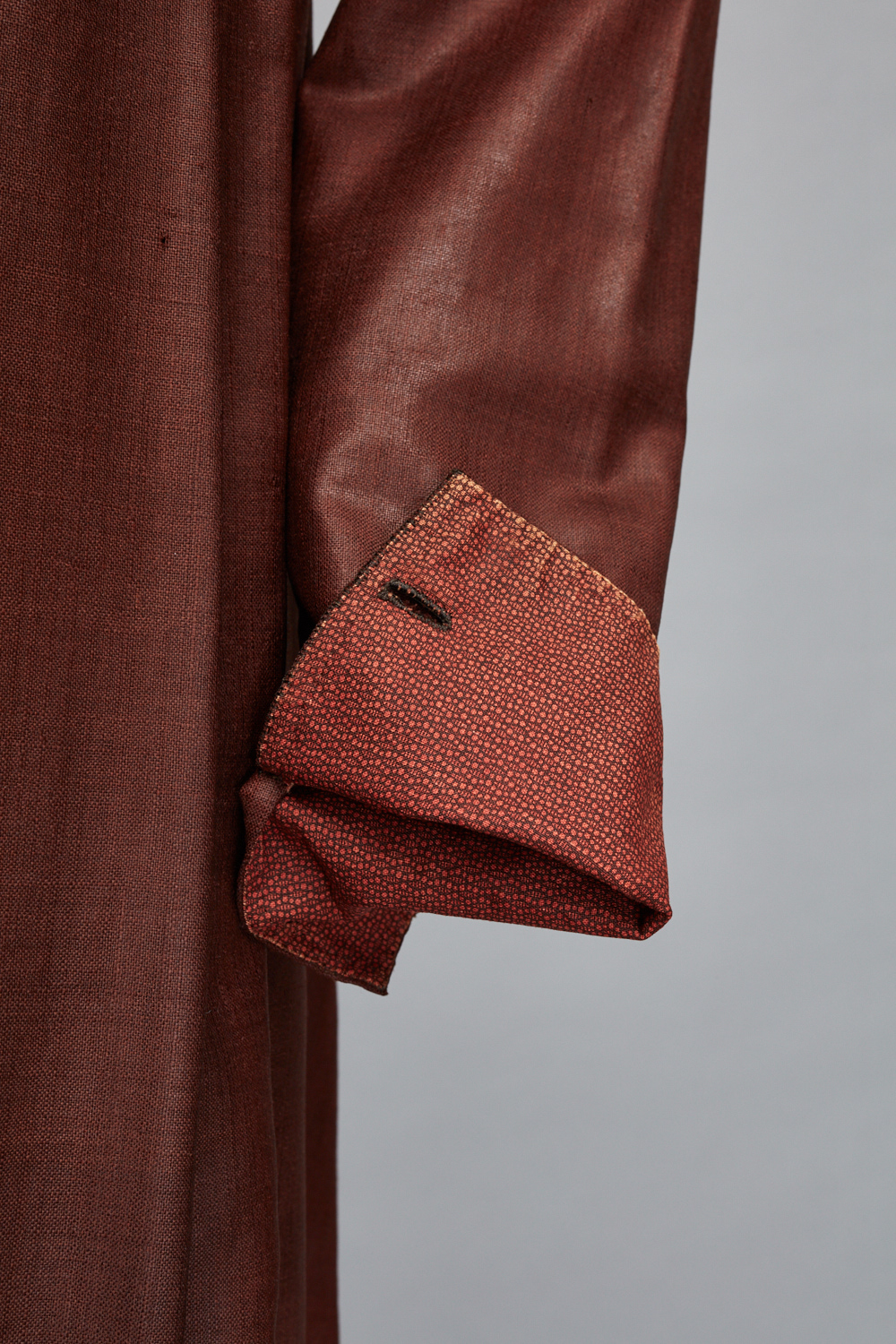 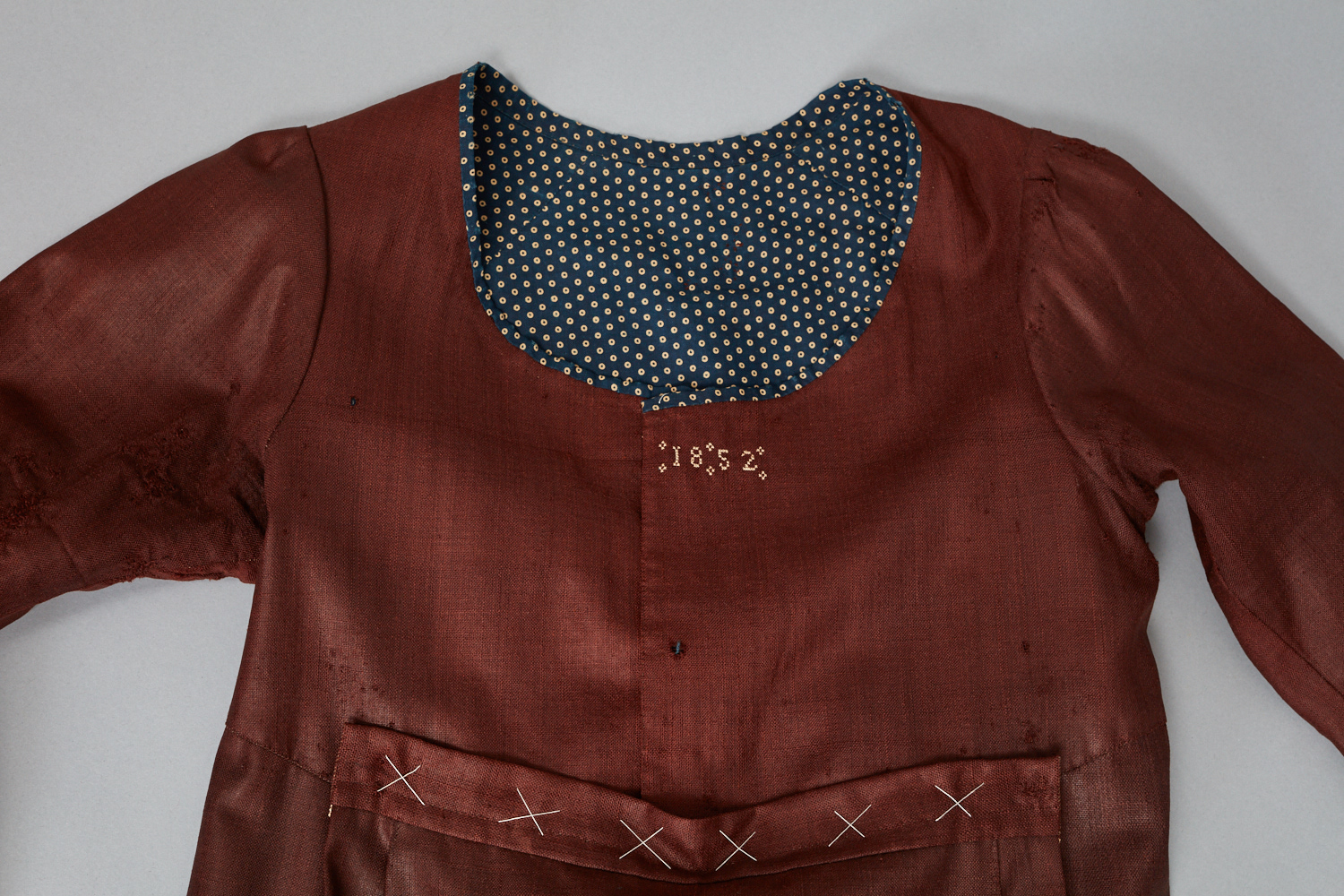 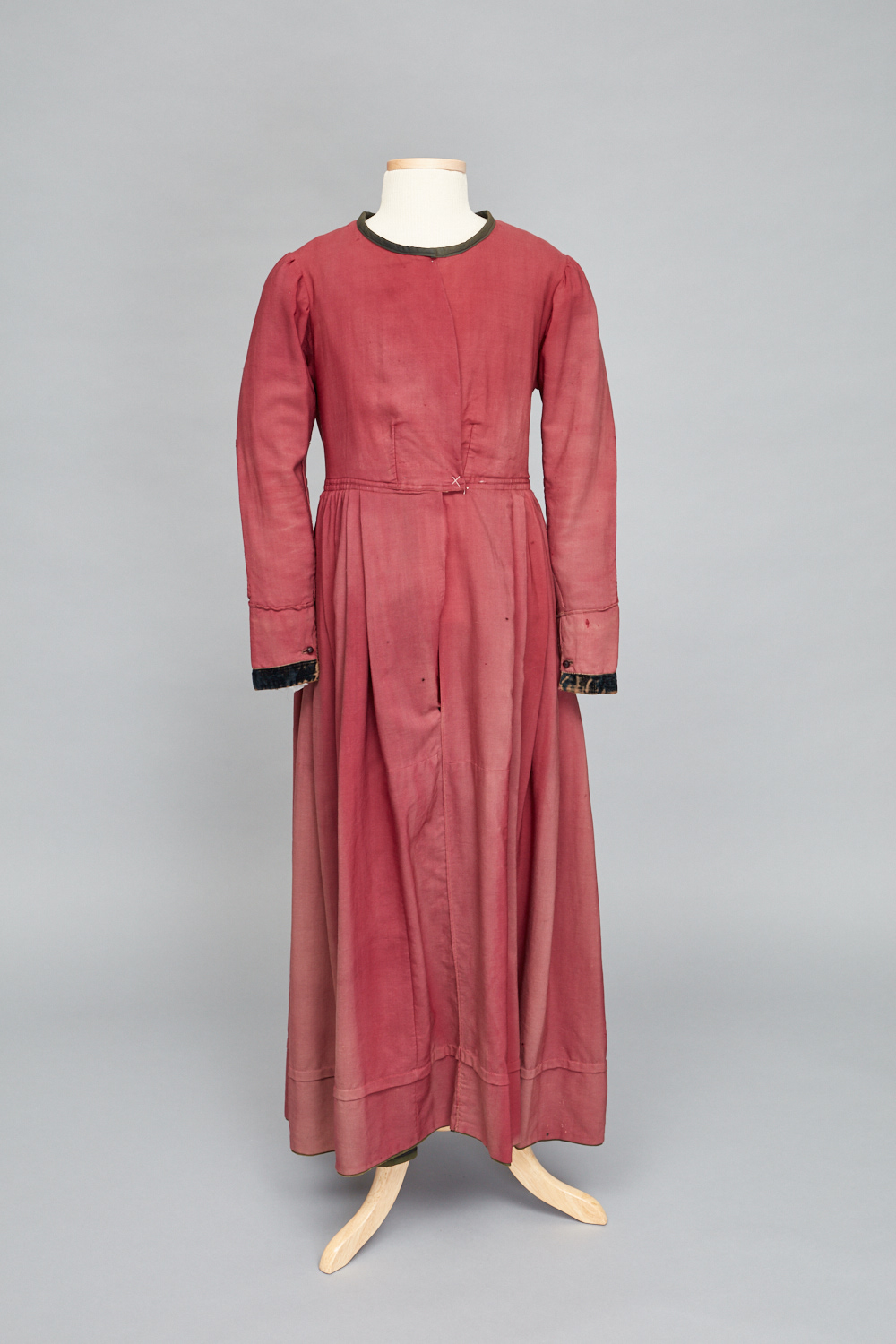 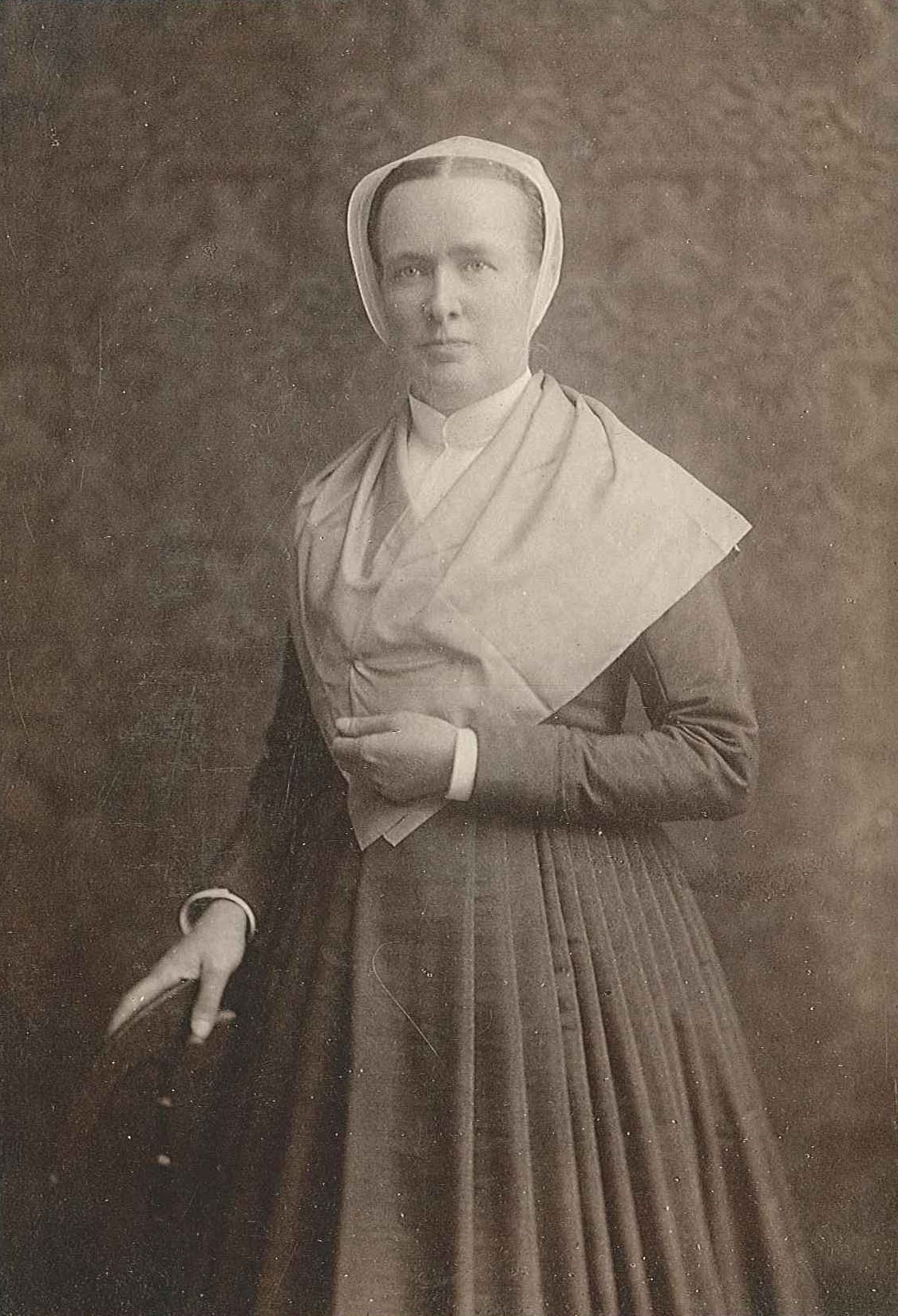 Silk neckerchief with initials, "CP" and "RE". Articles of clothing were passed down from sister to sister. 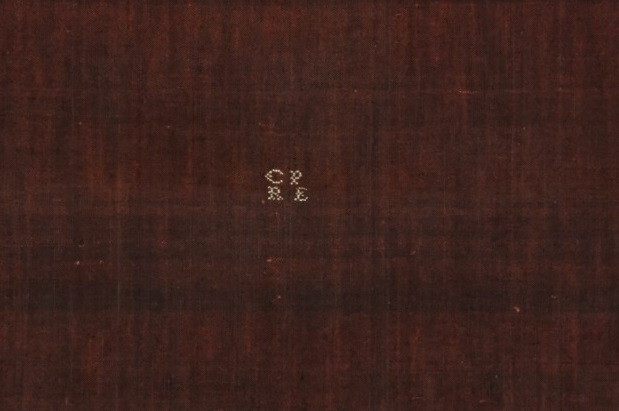 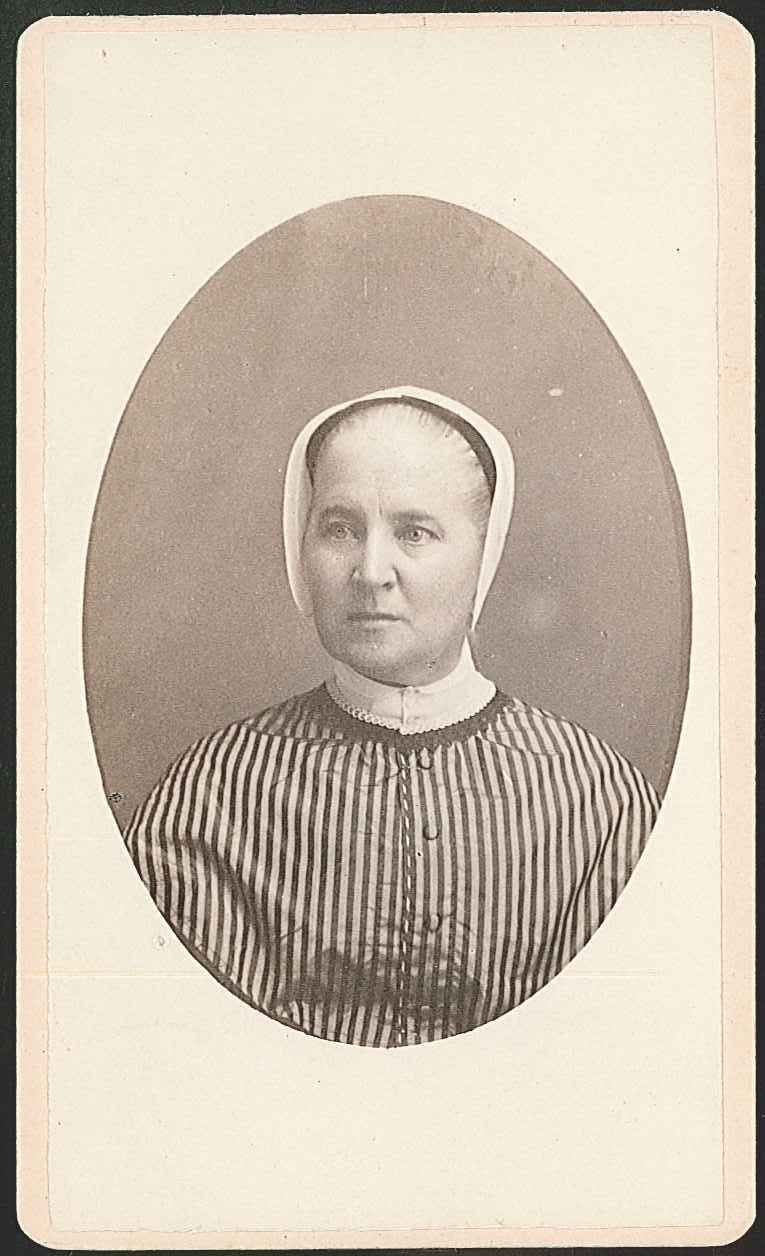 Wool and silk blend dress, Canterbury, NH, carefully constructed and neat inside and out. 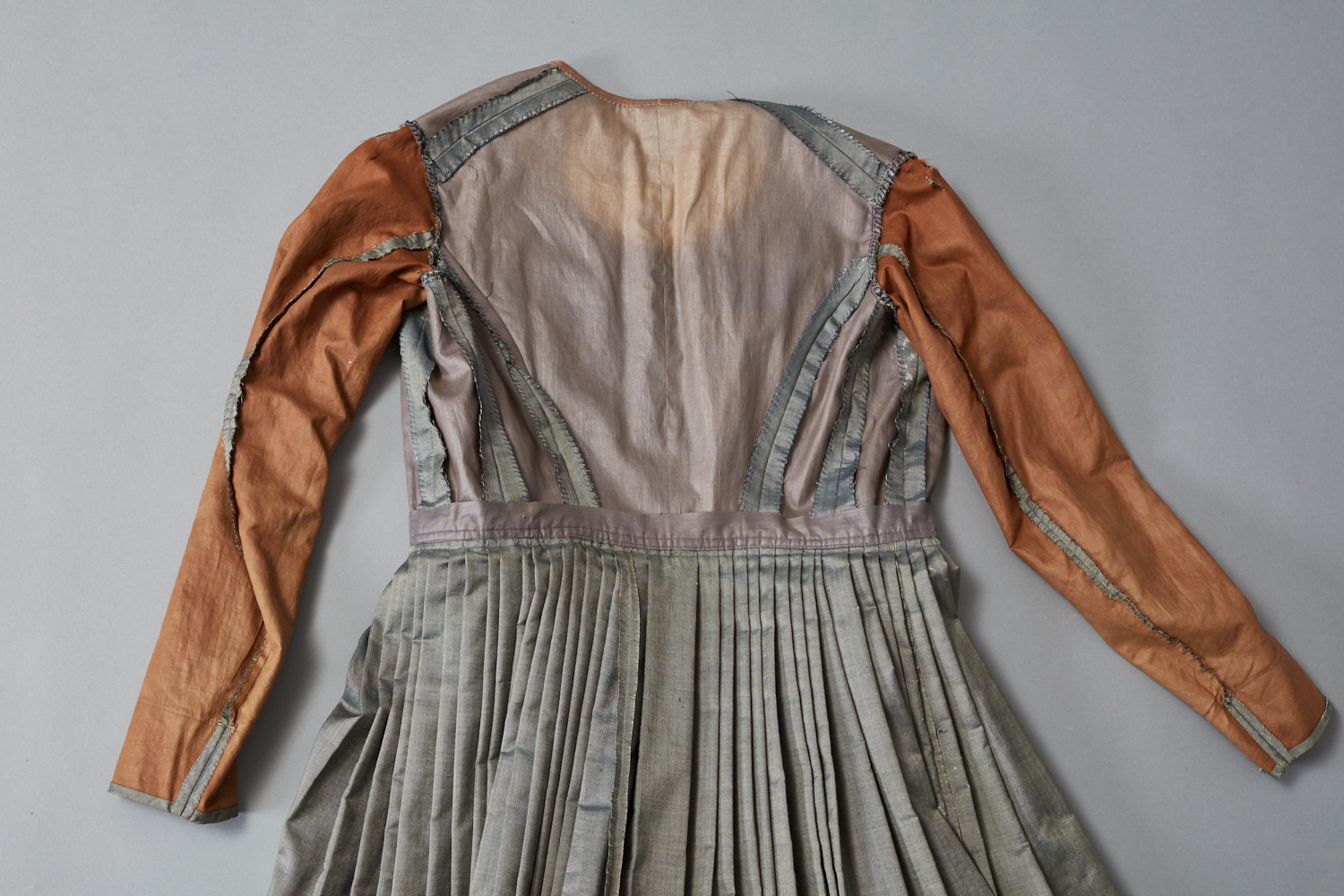 Detail of dress, Canterbury, cross-woven of rose and blue silk and wool. 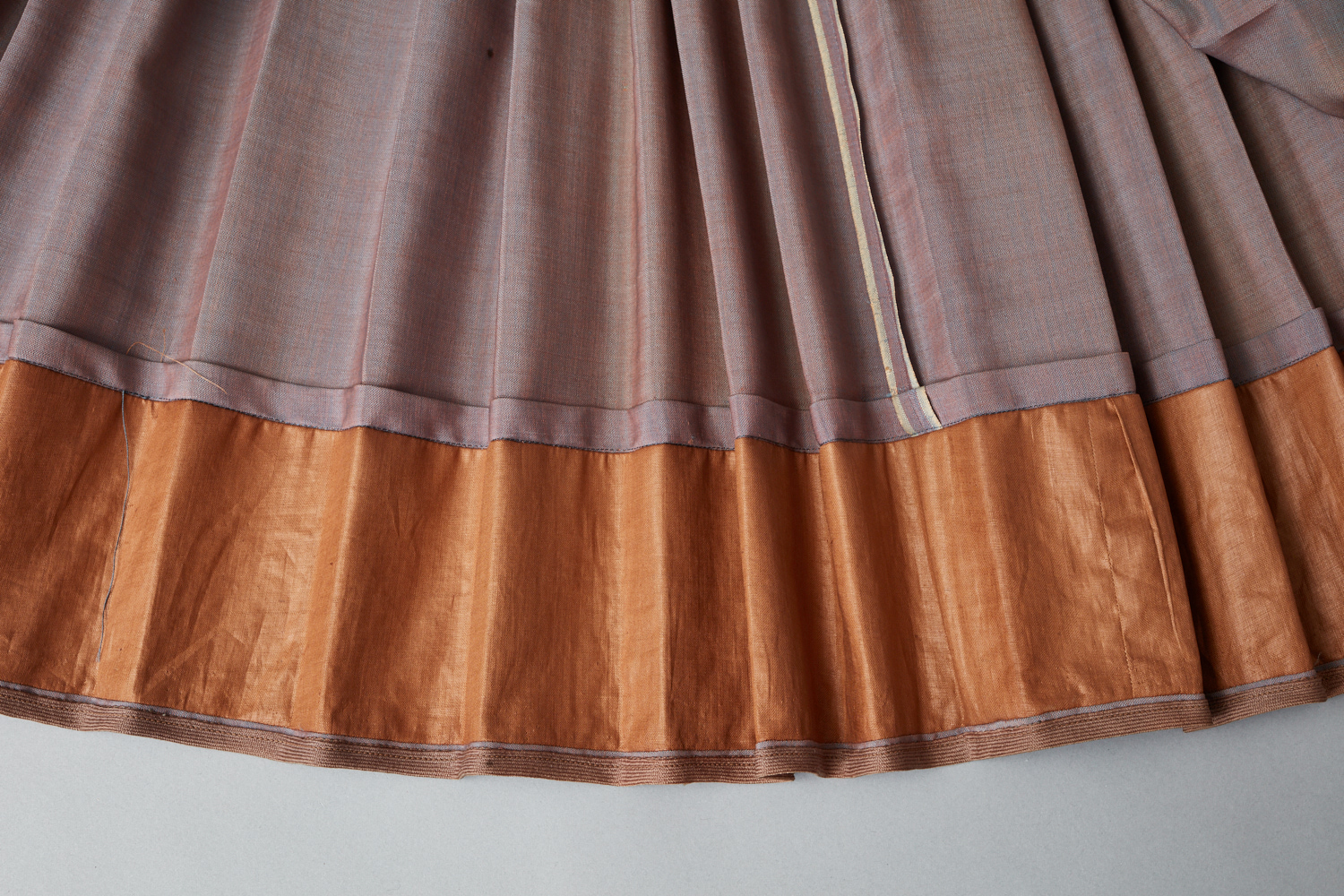 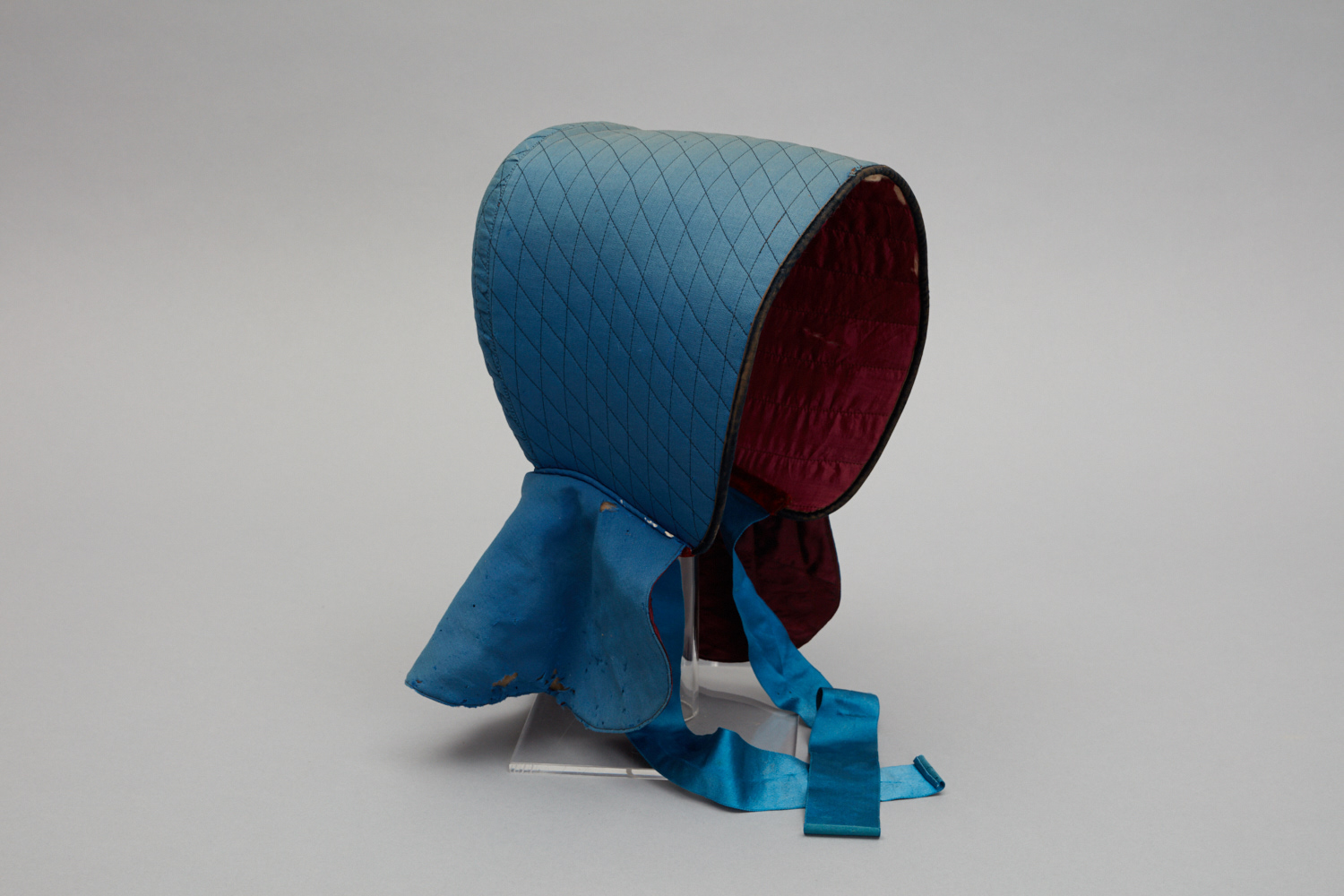 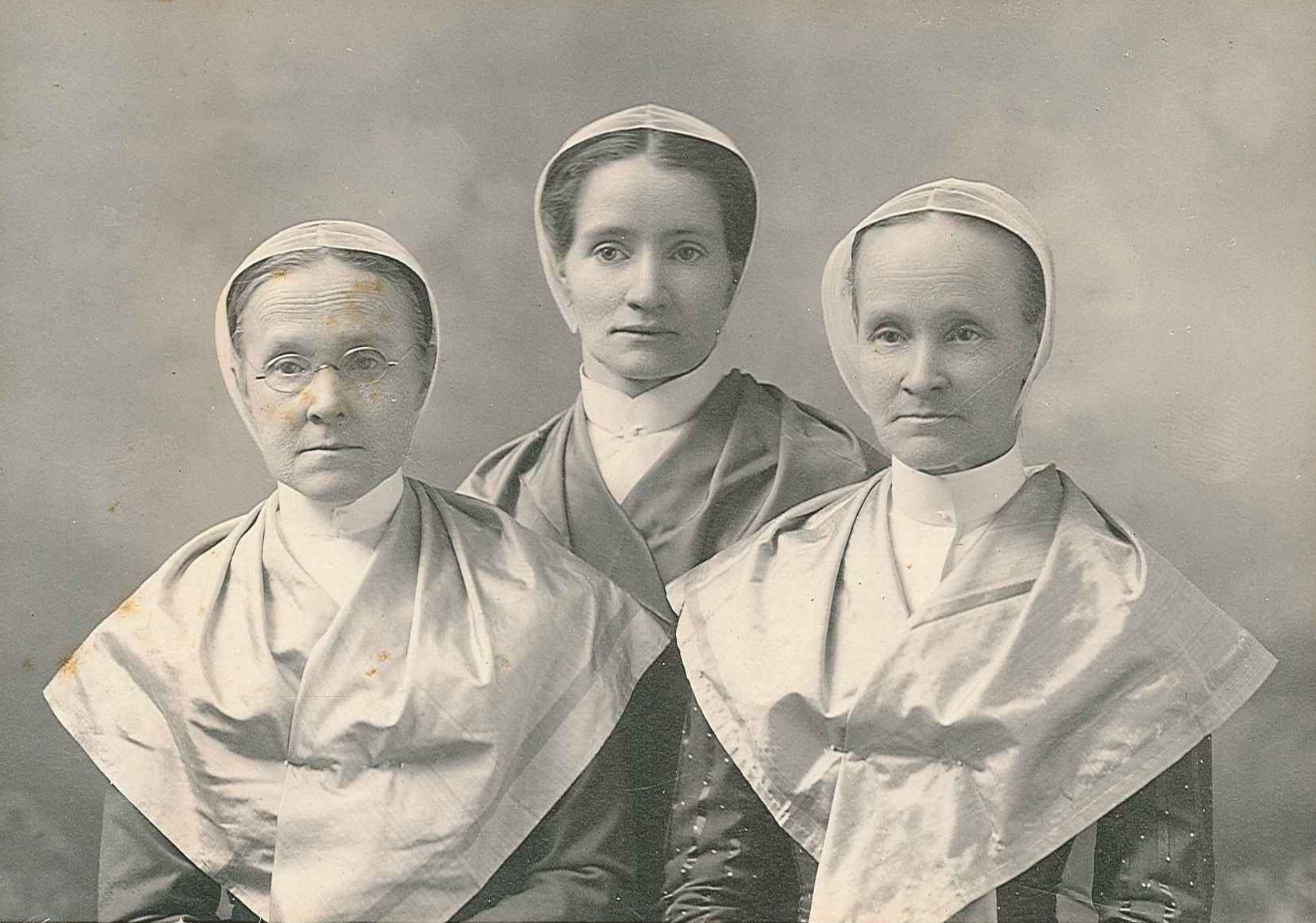 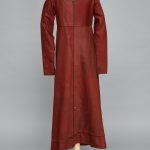 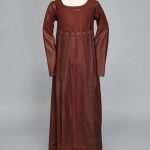 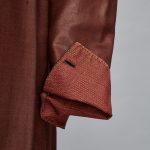 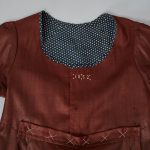 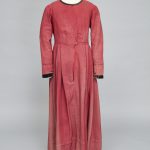 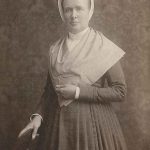 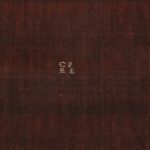 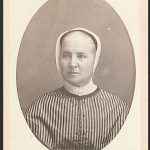 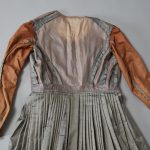 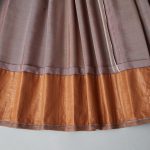 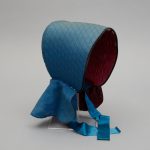 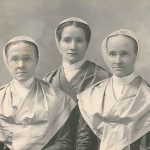 The Shakers at Mount Lebanon were first gathered into gospel order, worshiping in the meetinghouse and living and working communally, by the end of 1787. The communities at Watervliet, NY, and in Massachusetts, New Hampshire, Maine, and Connecticut followed soon after. These earliest Believers (the term used among Shakers) dressed no differently than their counterparts in the world.

On July 2, 1817, Elder Rufus Bishop of the Mount Lebanon ministry wrote to Father David Darrow, lead of the Ohio ministry, “Mother [Lucy Wright] has felt a gift to have some improvements made in the wearing apparel of brethren and sisters (without following the fashions of the world) – it has been gained by a spontaneous union of the body, and has ever since given a more general satisfaction than any change of the kind since the first of our faith.”

The code of dress adopted by the Shakers was meant to ensure that Believers were focused on matters of the spirit rather than the body and ego, but there were practical reasons as well. Uniformity of dress and appearance helped to keep everyone in union, feeling as an equal to one another. It also served the purpose of preventing expenditures that the Shakers could ill afford in the earliest years.

The clothing and appearance of the Shakers, particularly the sisters, was also a way to set them apart from the people of the world. The style of sisters’ dresses, adapted around 1800-1810, did not alter significantly until the middle of the 19th century, though materials, colors, and patterns varied. By continuing to wear caps, neckerchiefs, and dresses while worldly taste grew more elaborate, the Shakers demonstrated through their appearance that they had a higher calling. As an 1879 essay in The Shaker Manifesto put it, “We honor our forefathers and foremothers, not for any especially grotesque eccentricity nor purposed oddity of dress, but for their inclination and persistence, even to pertinacity to wear a plain, comfortable, economical and comely dress.”