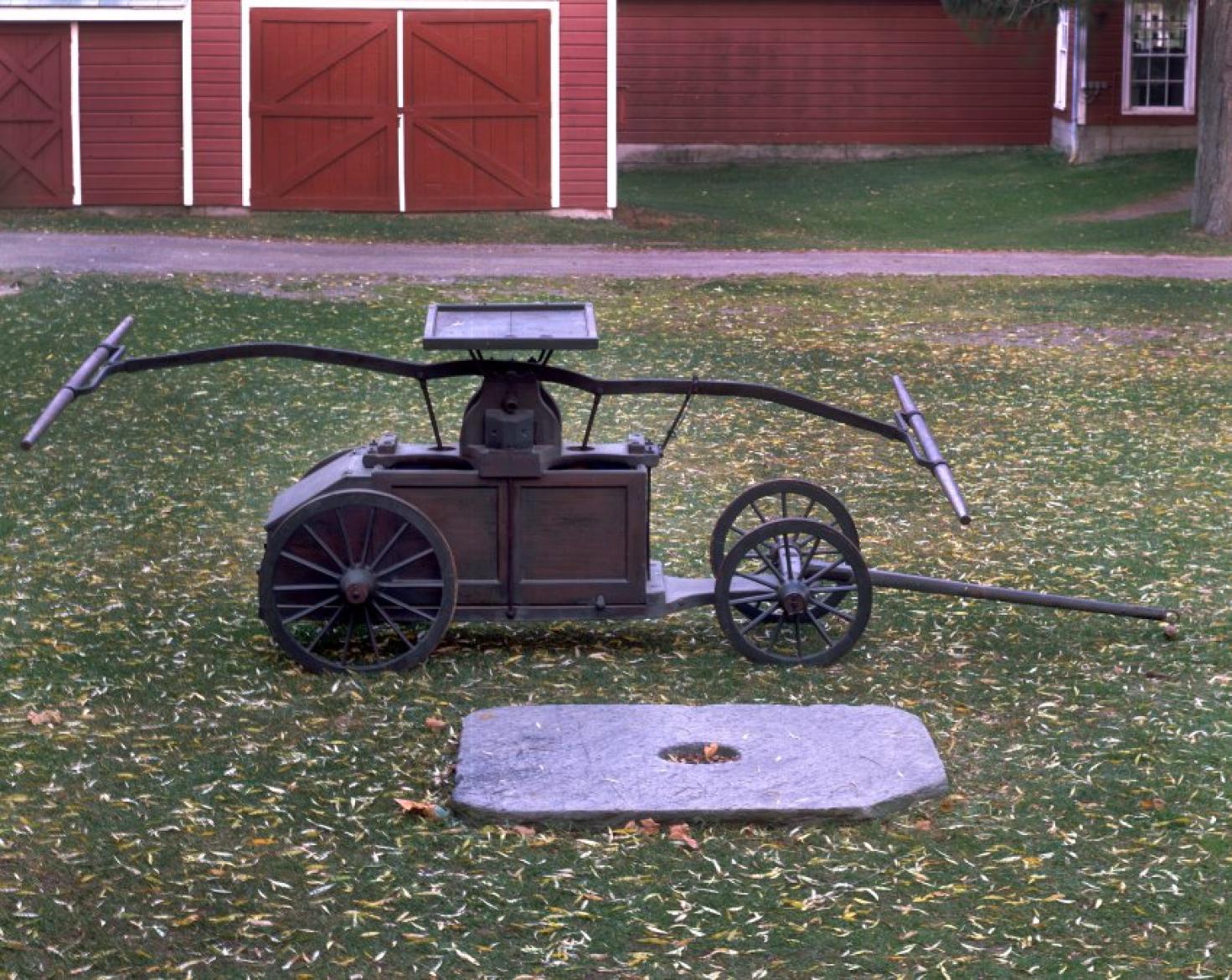 “Our fire engine was used & did good service”

The size of wood-framed Shaker buildings made the threat of fire and the challenge of effectively fighting fires a great and constant concern to the Shakers. It led them to a large extent to abandon the use of fireplaces in favor of safer cast-iron wood stoves, to replace wood shingles with slate or tin, and […]

The size of wood-framed Shaker buildings made the threat of fire and the challenge of effectively fighting fires a great and constant concern to the Shakers. It led them to a large extent to abandon the use of fireplaces in favor of safer cast-iron wood stoves, to replace wood shingles with slate or tin, and to build reservoirs to provide accessible water for bucket brigades and later to supply hydrants. At the community at Canterbury, New Hampshire, Brother Thomas Corbett (1780-1857) is credited with designing and being the primary builder of the hand pumper that is the subject of this discussion. Brother Thomas was described by Elder Henry C. Blinn “as a man spare in form, medium height, light hair, penetrating hazel eyes and a very active brain. He was a person of deep religious feeling and scrupulously honest in all his business relations.” (Quoted in a letter from Eldress Emma B. King, Canterbury, NH, to H. Phelps Clawson, Curator of the Shaker Museum, Chatham, NY, July 6, 1956, Shaker Museum Archives.) Although Brother Thomas functioned as the family physician and herbalist beginning in 1813, it was his “very active brain” that likely led him to create the pumper in 1822. Hand pumpers of this general design were initially imported from England and first used in New York City in 1731. The first American-made pumper is credited to Thomas Lote in 1743, so Brother Thomas certainly had successful working models on which to base his pumper. 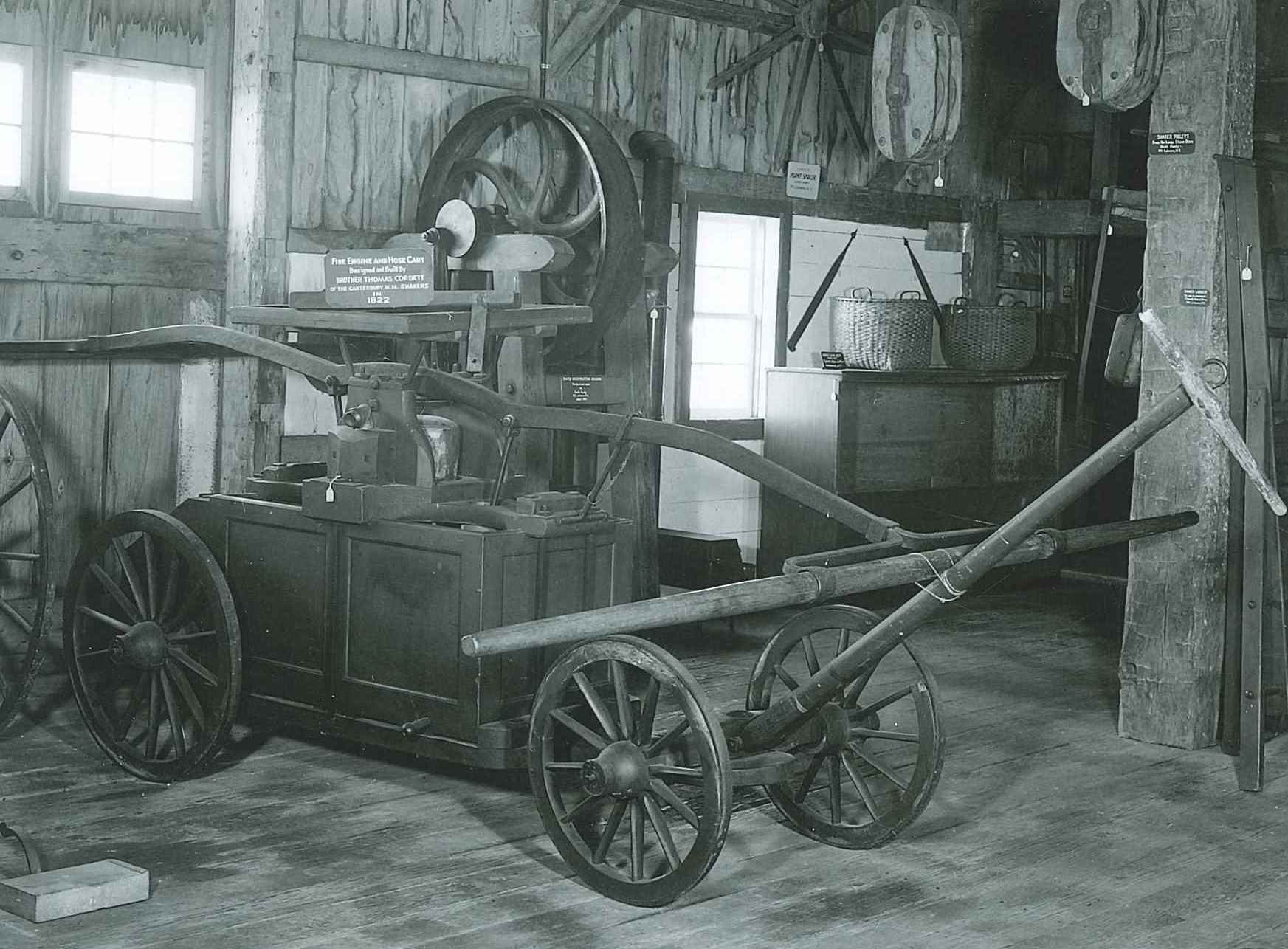 At the time it was made, Brother Thomas’ pumper would likely have been called a “hand tub,” a pumper that was supplied with water by organized bucket brigades rather than being able to draw water directly from a stream or pond. Eldress Emma B. King described the pumper in a note supplied to the Museum at the time of the pumper’s acquisition:

It required the help of twenty four men to run it. This number would send a half inch stream some sixty feet. With much less help in the year 1838 it threw a steam over the belfry of the [Church Family] dwelling … Since that date, a suction hose has been attached. In 1860 help hose was purchased which is still [1949] with the engine.

In 1822, the year Brother Thomas built the pumper, Philadelphia fire engine manufacturers, Sellers and Pennock, offered the Hydraulion – thought to be the first pumper with a suction pump. At some time between 1838 and when the pumper came to Shaker Museum, a suction pump was added to the apparatus, eliminating the need for the bucket brigade.

Although it is hard to evaluate the success of Brother Thomas’ pumper, it is known that on August 15, 1822, Nathan Smith, founder of the Yale Medical School, wrote to Parker Cleveland, a lecturer on chemistry and mineralogy at Bowdoin College, that while he was visiting the Shakers at Canterbury he had seen the pumper throw water 29 feet farther than the pumper used by the town of Concord, NH. He also estimated that Brother Thomas’ pumper could be built for $300.

In his compilation of historical information on the Canterbury community, Elder Henry Blinn recorded that in 1845:

A fire broke out in the Sisters new brick shop at the Sec[ond] Fam[ily] Jany 16, in the basement. It is supposed that the burning cinders fell through an aperture in the chimney. It was however, soon extinguished, but had the effect of alarming the whole Society & many reached the place of the fire & rendered efficient aid. Our fire engine was used & did good service, & [in1891] the writer has the impression that this was the last time the engine was used to extinguish a fire. 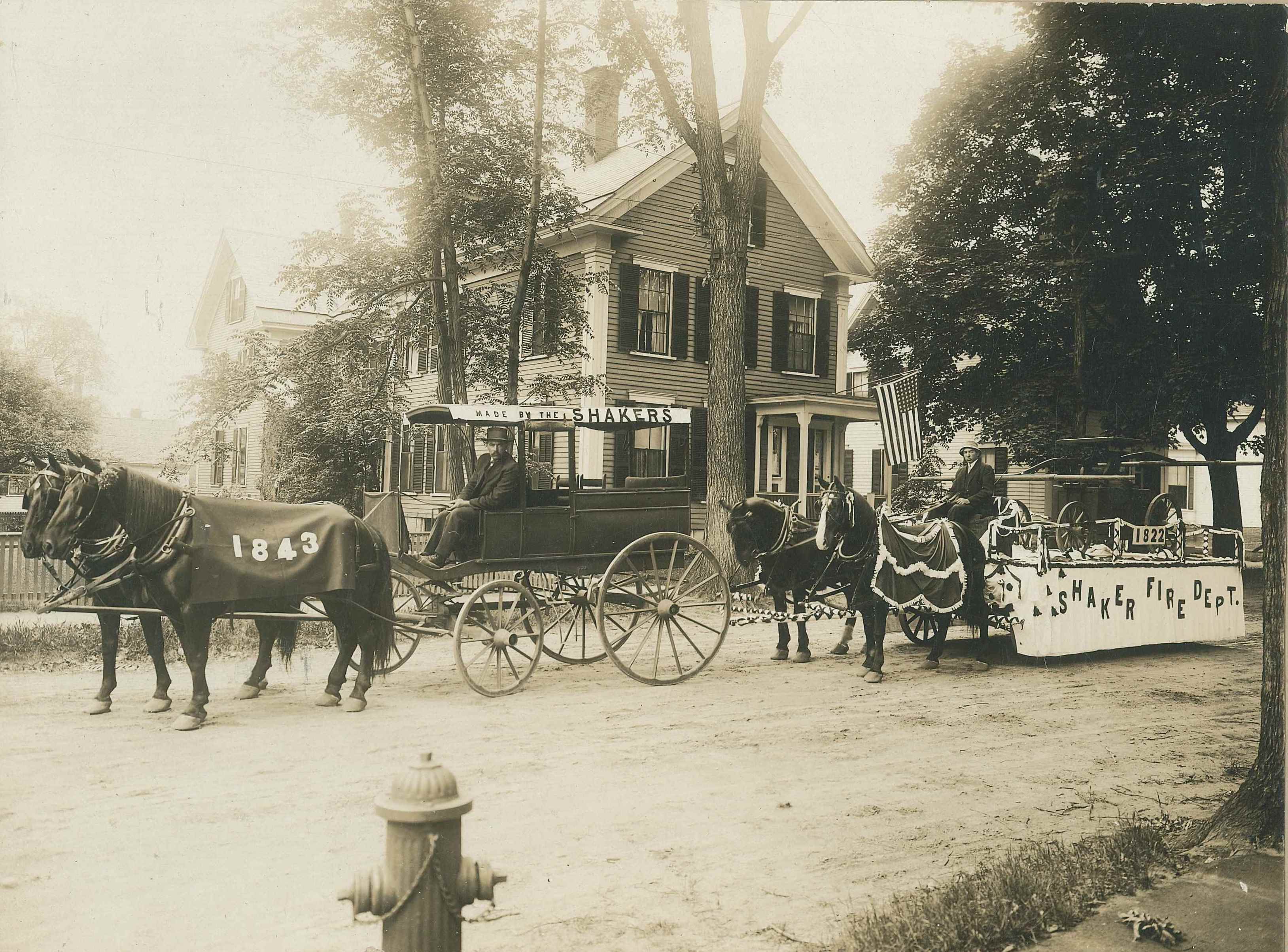 Whether or not the pumper continued to be called into service, there it was, safely housed, and ready for service – giving some comfort to the members of the community. The importance of the apparatus is reflected in a photograph taken in 1906 by Levine & Hayes of Boston that shows the Canterbury Shaker participating in a parade in Concord, New Hampshire, in which they drove a carriage made by the community in 1843 and riding on a “float” titled “Shaker Fire Dept.” was the 1822 hand pumper. Without a doubt, the most likely reason the pumper was not used was the loss of the Canterbury Shakers’ fire-fighting force of able brothers who could man the pumping mechanism. The comment about 24 brothers being required to operate the pumper probably referred to two teams of 12 men working in alternating shifts. The Shakers, like their neighbors, eventually became more and more dependent on the local volunteer fire department.